Born circa 1922, Thomas Smith was the son of two pilots. His father died in a crash shortly after his birth, and his mother attempted to carry on with her life as planned.

The Smiths had wanted to move from Australia (presumably their native country) to the Philippines. When Tommy was six months old, Mrs. Smith took him with her as she flew her plane to destination.

They never arrived. Due to a freak storm, the plane ended up in the Dinosaur Island area and was downed by a mega-pterosaur. Alice Smith’s last act was to affix a parachute to her son’s crib and hurl it outside.

Mission X for a baby

The baby landed smack into a nest of pterosaurs. Somehow the mother didn’t bat an eye and adopted the strange creature. The human learned to communicate by uttering powerful, inhuman pterodactyl cries. His brothers-with-wings were supportive of their little brother with no wings. 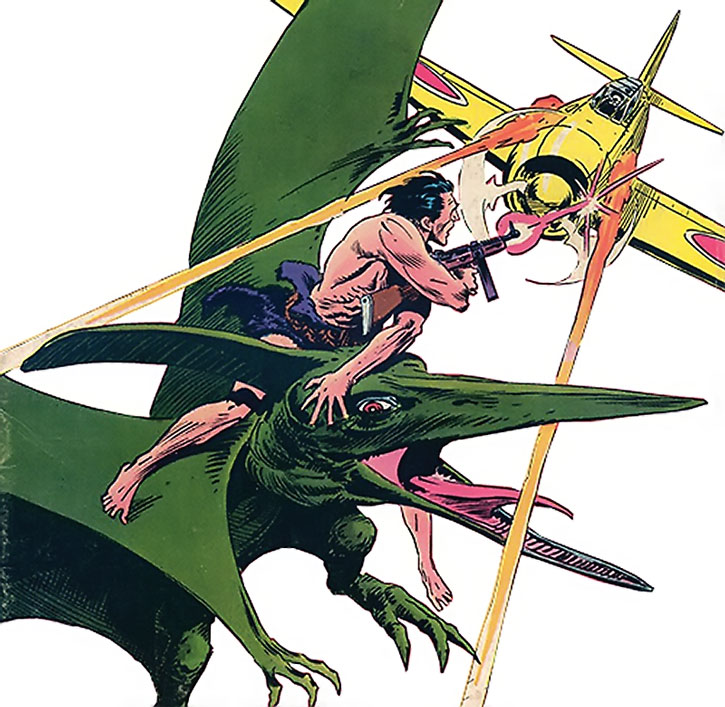 The pterosaurs — a species with an adult wingspan of a dozen metres — let the youth ride them. They soon learned to cooperate by having their human throw large rocks onto other predators from the air. This tactic forced competing dinosaurs to avoid these pterosaurs’s turf.

When Tommy was about nine, a freak lightning bolt killed his steed. He crashed into the ocean, far from Dinosaur Island. An American freight ship stumbled upon him minutes later and fished him out. Though the boy was savage and kept calling for his pterosaur friends, the sailors pacified him and handed him over to the authorities.

Tommy was taught to talk English and went through remedial school. It worked, and the Smith kid successfully joined society. However, he remained a loner with a savage vibe, and longed to return to his lost island.

In 1941, Smith volunteered to join Naval Aviation. He wanted to fly, and he requested to be assigned to the Pacific theatre in the hope of finding his island. During training, it soon became evident that he was a gifted pilot, his childhood experience translating well to piloting a fighter plane.

During a battle, Smith’s aircraft carrier was sunk, leaving him with nowhere to land. Hoping to find some uncharted island to land on before he’d run out of gas, Lt. Smith flew out. Amazingly, he came across “his” island, immediately recognising it from the air.

Though a decade had passed, the mega-pterosaurs answered his cries, and Smith was reunited with his adoptive family. A pterosaur saved Smith from a mega-carnosaur, and Smith saved his brother in turn using one of his white phosphorus grenades.

Lt. Smith rallied his brothers. He armed them with the 100 lbs. bombs from his plane after crafting handles from vines. They then flew out to attack four Imperial Japanese destroyers and avenge Smith’s carrier.

The attack was successful. Mostly through a combination of coming from nowhere and the enemy sailors’s shock upon seeing the large pterosaurs.

Lt. Smith then returned to his duty, having one of his brothers fly him where American ships could find him. Wishing to protect his secret, he never told anybody how an Imperial Japanese task force had mysteriously met its doom. He planned to return to his brothers-with-wings once the war would be over.

During a visit to his brothers-with-wings, Lt. Smith discovered that the Imperial Japanese forces had established a small camp on their turf. There, they were repairing their damage submarine. Perhaps the Japanese had observed that the mega-carnosaurs tended not to stray in this area.

The soldiers machinegunned one of the pterosaurs – either to defend themselves or because they assumed it would attack. This made the situation even more of a personal matter for Lt. Smith. 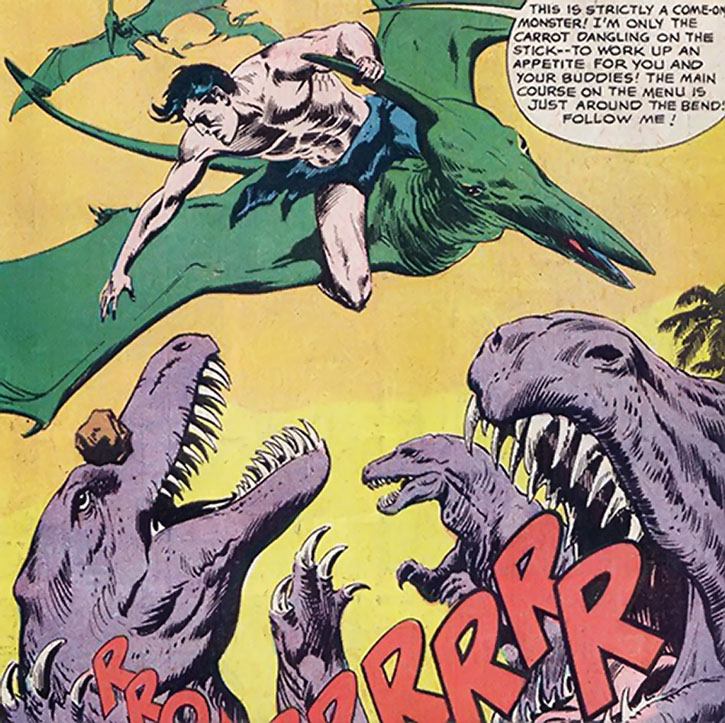 (In the published story this is Smith’s first return to Dinosaur Island. The first story did not happen. We’ve changed that to a deliberate visit so both stories would form a continuity rather than the second being a rehash of the first.)

Smith organised a raid of his brothers-with-wings on the Japanese positions. This species of pterosaur being merely in the ten-to-fifteen metres wingspan range — still larger than any pterosaur fossil found so far — they were not bulletproof. Thus the raid was not intended to wipe out the enemy but to throw them into disarray.

Thus, after the quick raid, Lt. Smith and his tribe flew on to proceed with the real plan. They flapped just out of reach of a number of large carnosaurs, with Smith further angering them by shooting them with his .45 Colt.

The resulting stamped forced the Imperial Japanese forces to withdraw, since they lacked heavy weaponry. As they sailed away on their damaged sub, Lt. Smith had his pterosaur tribe drop him near his airplane, which he use to torpedo the enemy before returning to US lines.

The continuity that time forgot

Tommy Smith appears in a short story that is not formally connected to any continuity, though it bears the War That Time Forgot title.

The stories with this title can generally be assumed to take place in the DC Universe. Since various elements from those (Dinosaur Island, the G.I. Robot, the Suicide Squadron…) have been made a part of DC continuity. Or at least one of the continuities – who can tell these days.

In 1987, writer John Ostrander suggested in Secret Origins a framework to integrate War That Time Forgot stories into the 1940s of the DC Universe. We’ve explored this approach to its logical conclusion in our big Suicide Squadron article.

Integrating Smith with the Suicide Squadron is trivial, and helps with the suspension of disbelief :

One mega-pterosaur on Dinosaur Island was documented as being very friendly toward humans because they were the first thing it saw when it hatched. It could be the same species with the same reflex in the same circumstances.

Alternatively, the baby Tommy Smith might have been rescued by the same specimen (named “Dino”) in 1945, and fought during the Việt Nam invasion rather than World War Two. Dino was good at spotting humans and rescuing them in mid-air. And having the same pterosaur co-star in both stories goes a long way toward helping suspension of disbelief.

Alternatively, the timeline could be moved in the other direction. Tommy Smith did fight during World War Two, but in this timeline it’s Dino who is older, not to mention female. Dino (or rather Dinah), the humans-loving pterosaur, would have adopted Tomy Smith in her nest during the early 1920s as per the History section.

What changes is that Dino/Dinah is an adult, not a baby, when it encounters Suicide Squadron troopers Mace and Morgan (two men who hate each other worse than the enemy !) during WWII. And helps them because they’re humans like her flight-challenged adoptive child.

Mace and Morgan once found a primitive human boy on Dinosaur Island. This character, whom they nicknamed “G.I. Caveboy” due to his courage in combat, was never seen again.

The G.I. Caveboy and Tommy could be merged. Though in this variant timeline Tommy is born circa 1930, is found at about age 14 by the two Suicide Squadron men (have we mentioned that they hate each other worse than the enemy ?), goes to remedial school for a half-dozen years and enlists to fight in Korea.

If Tommy Smith fought during WWII and/or Korea, he could easily have been a Suicide Squadron member – joining so he could operate in the Dinosaur Island area and look for his brothers-with-wings.

A muscular, handsome, dark-haired man occasionally smoking a pipe. When on Dinosaur Island he wears his black fur loincloth because this is how these sorts of things are done.

Though Tommy Smith is now completely fluent with American life. But he remains a loner and has a Romantic longing for the skies and his lost island.

He enjoys the company of giant pterodactyls more than humans’s and he’s fond of the Howardian/Burroughsian aesthetics of a primitive, physical life of danger.

Lt. Smith keeps his ties with his brothers-with-wings a secret.

“SKREEEEEEE SKAAAAAA ! Help me, big brothers with wings… I am in great danger !” 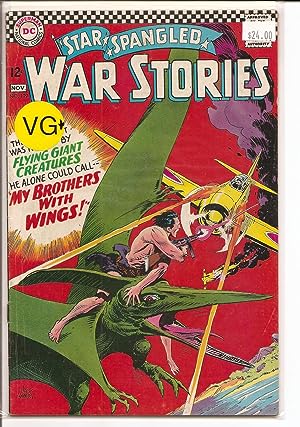 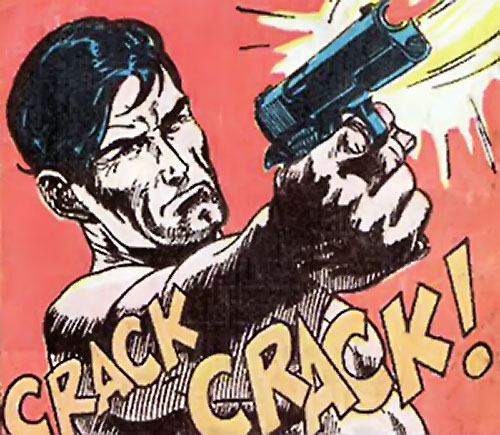 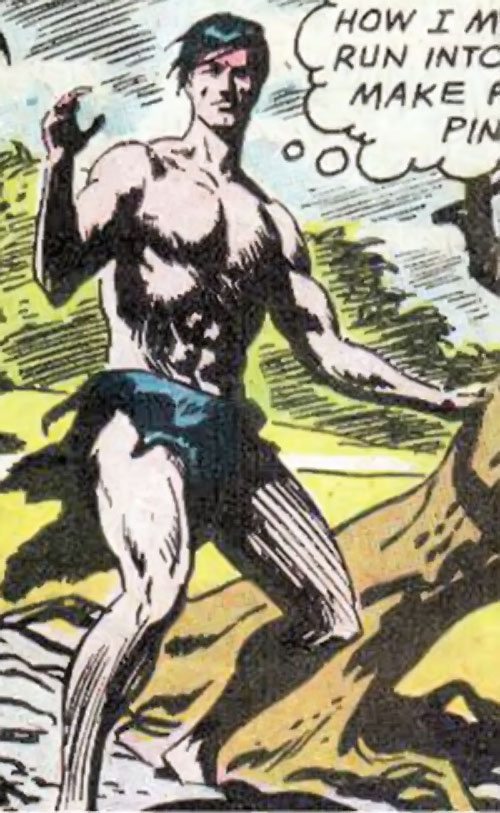 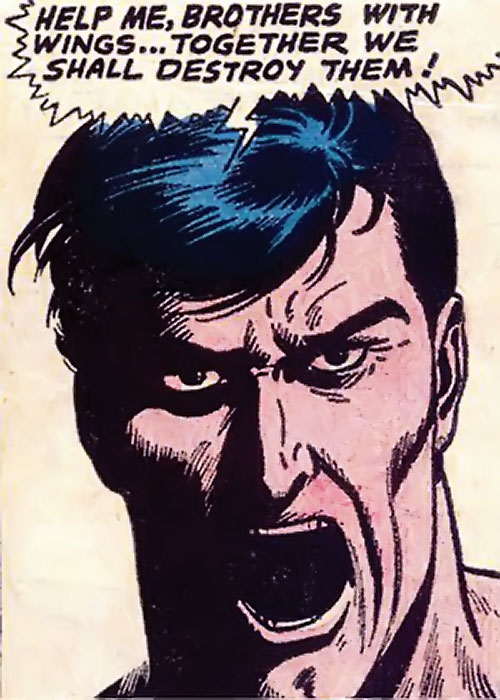