Tomorrow Woman is a powerful telekinetic, and also has telepathic abilities.

Her telepathy appeared to be in some ways stronger than the Martian Manhunter’s. Thus she could sense the emotions of distant people while seeing them on live TV. She also performed some sort of telepathic surgery to erase inborn mental conditioning from a score of children in seconds.

She could also speak all sorts of languages as needed. Presumably, she used her telepathy to pick up the needed grammar and vocabulary from the mind of native speakers.

Though she is a gynoid , her brain and body are amazingly sophisticated and lifelike. Determining that she’s not an actual organic person would apparently take invasive surgery, as the JLA never detected anything out of the ordinary.

She is also stunning, and very persuasive due to her presence and eagerness. She easily convinced the JLA that she was a real heroine and a good recruit.

JLA: Tomorrow Woman depicts her as being aware that her goal was to kill the JLA. This would mean extraordinary acting and deceptive ability. Howbeit, I’m not sure that it was Morrison’s intent in the original story.

Tomorrow Woman was supposedly a “four-lobed mutant” specializing in telekinesis. Like Captain Comet, she supposedly was a possible result of human evolution millions of years hence. In 1997, she tried out for the new Justice League during their first recruitment drive and made it.

In reality, she was an uniquely advanced android. TW had been created by the combined efforts of Professor Ivo and Thomas Oscar Morrow (Tomek Morah). Her job was to infiltrate the JLA and then set off her EMP  bomb, erasing the brains of the JLA and effectively killing them.

(Tomorrow Woman was based on Blodeuwedd from the Mabinogion, a woman magically created from flowers to betray the hero Lleu Llaw Gyffes .)

Tomorrow Woman eagerly served with the JLA between ten days and a month (estimates vary). One of the main reported case was curing the mental taint created by alien energies in 1987. This corruption was now affecting every ten-year old lifeform on Earth to turn it into a murderer. 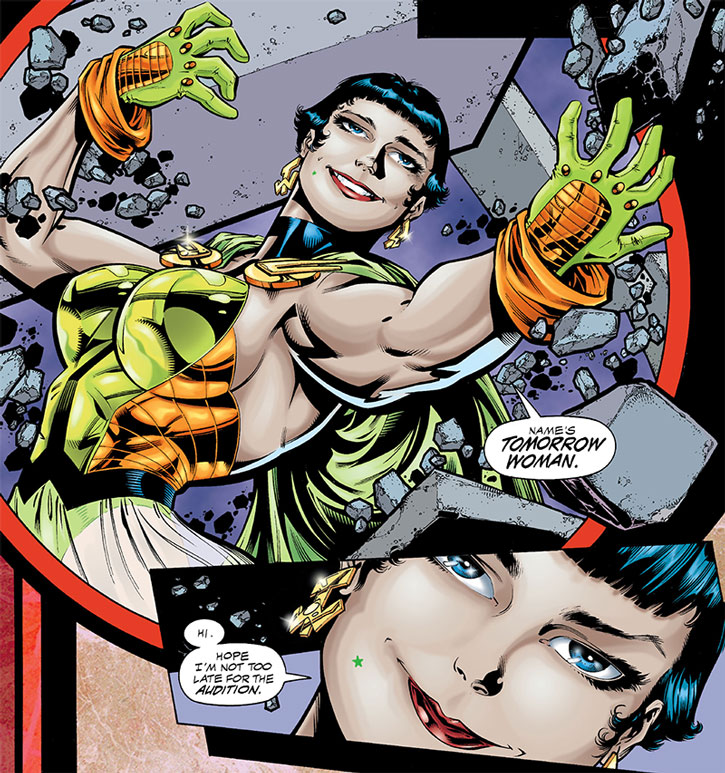 Tomorrow Woman was able to telepathically cure this programming. With the backing of the Martian Manhunter, Aquaman and Superman (back then an energy manipulator) she broadcast her mentality worldwide and fixed everything and everyone.

The other main case was fighting to contain the future super-weapon I.F., which had been rampaging through several US cities. The JLA did emergency evacuations in I.F.’s path, as it took several days of research to determine I.F.’s nature and that an EMP was the best way to take it out.

Actual freedom for a change

However, Tomorrow Woman realised the evil of her programming. She now wanted to free herself. This was actually T.O. Morrow’s doing – an artificial brain that was such a work of art and so sophisticated that it spontaneously evolved ethics and rejected its murderous, treacherous programming.

To free herself, and not kill the JLA in the process, TW flew straight into I.F.and detonated her internal EMP bomb point-blank, away from the JLA and civilians. She “died” during this blast, the EMP erasing herself as well as I.F..

Tomorrow Woman was buried in the Chapel Hill graveyard in Metropolis. This is where deceased heroes such as Green Arrow, Hal Jordan, Ice, Metamorpho, Johnny Quick, Hourman, and other JLA and JSA members are buried.

The JLA then arrested Ivo and Morrow.

The android machine colony Hourman later stated that Tomorrow Woman was, in the future, considered to be the first fully realised android. As such, she was considered an ancestor of sorts by self-aware machines. Presumably, this means that Ivo and Morrow’s groundbreaking choices in architecture correspond to those of many later generations of androids.

The time-travelling Hourman once briefly resurrected Tomorrow Woman through time manipulation, bringing her back for one hour. Overjoyed to see that she was remembered as a selfless heroine, Tomorrow Woman spent her “hour of power” protecting people and heroing before she vanished.

In 2000, Tomorrow Woman (or at least her body) was force-reanimated by Brainiac-13. She had to join his army of robots as he took over Metropolis. What happened is unclear. But one assumes that the “zombie” Tomorrow Woman body shut down after Brainiac-13 was defeated, and was properly buried a second time.

Due to massive time manipulations, Tomorrow Woman was present during the onslaught led by the Avengers and the Justice League against Krona in 2003. TW was but one of many anomalies there. Tomorrow Woman was seen fighting along with the Scarlet Witch and Starhawk, from the Marvel Universe.

A gorgeous super-heroine wearing her black hair in a bob.

She has a small bright green star tattooed on the right side of her chin.

She also sports a pair of golden earrings shaped as her “TW” logo.

Tomorrow Woman was eager and dynamic, and very much wanted to do good and be a heroine. She was attaching and affectionate, her personality designed to win over do-gooders. Initially cruel and deceptive underneath, she evolved a generous ethical code which she passionately turned into heroic actions.

When she returned for one hour, Tomorrow Woman was all about action. Her imperative was to protect people both from harm and from any form of slavery. These included freedom-destroying factors such as drugs or a stunted upbringing, which she could undo via telepathic healing.

Bonuses and Limitations:
Medicine is only useable to treat Mental damage and conditions using Telepathy (Superspeed and Multi-Attack both apply).

Advantages
Life Support (Tomorrow Woman apparently is immune to physical fatigue, and may have other reduced or nonexistent physical needs), Local Hero (certain builds of android from the future – including the far future).

Drawbacks:
Secret Identity (Her nature as an android), Misc.: Tomorrow Woman is programmed to obey her creators, though she has the organic ability to override that, Misc.: the word “freedom” and its synonyms aren’t present in her memory banks.

Equipment:
INTERNAL EMP BOMB [BODY 01, Miniaturisation: 06, apparently has high APs of EMP, and high APs of Mind Blast (Combined with EMP), both with a large Area of Effect]. Tomorrow Woman presumably also had some sort of passive tracers allowing her creators to permanently monitor her with real-time audio and video, as if standing next to her.

Given the low screen time, many of the stats are speculative. 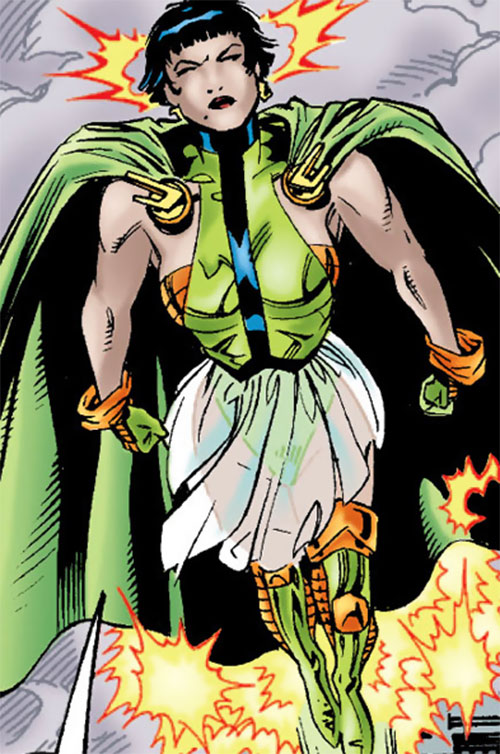