Topper is a huge and very powerful man. Like all giant thugs he is, of course, faster than he looks. But Topper takes it further by actually having a remarkable degree of martial ability. He could engage and hit Richard Dragon, arguably the best living martial artist in the world.

While Topper is a gentle giant, Moon has implanted a tiny electronic receiver in his brain. It can instantly trigger a state of murderous rage directed at Moon’s enemies. Moon keeps a remote control to trigger this implant.

Moon has also done further enhancements on Topper, armouring him with subdermal plastic moulded plates that allow his servant to shrug off even superhuman blows.

Topper was a servant of Doctor Moon when the latter was working with criminal industrialist Guano Cravat. Moon sent thugs to harass and beat up the fresh students at Richard Dragon’s newly opened dojo, and the kung fu fighter swiftly determined where Moon’s hideout was.

Predictably, Dragon, accompanied by Lady Shiva who was itching for a fight, swept through Moon’s thugs and had Topper sent against him.  After discovering the giant was armoured, Dragon concentrated his attacks on points that couldn’t possibly be armoured, soon bringing Topper down.

It is a testament to Topper’s power, though, that he cracked several of Dragon’s ribs and dislocated his jaw. Shiva had to take Dragon to an hospital.

Topper never appeared again to the best of my knowledge.

Topper is intellectually disabled. He behaves mostly like a gentle, curious child. Moon almost treats him like a big, lovable dog, and poor Topper seems to enjoy that treatment.

English is presumably his second language, and he doesn’t speak it very well.

Equipment:
RAGE IMPLANT [BODY 02, Catastrophic Rage, Misc.: The Rage Drawback can be switched on and off via a special remote control]. 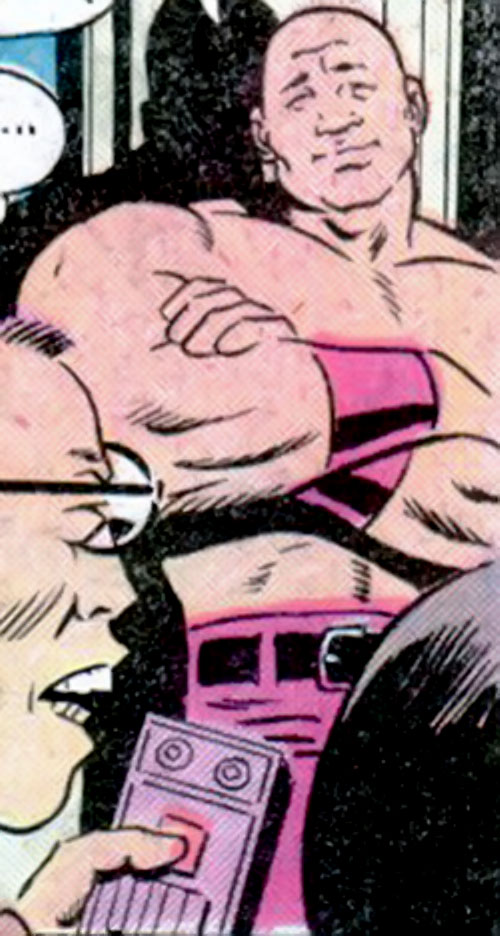