Torchlight is an action-adventure role-playing computer game published in 2009. It was a modernized, polished version of the classic Diablo video game.

The Amazing and Stunning Shivangi (and her Faithful Companion the Cunning Subarna) is a fleshed-out example of a Player Character in this universe. Specifically, she is a low-level Vanquisher.

The three characters in the game (the Vanquisher, the Warrior, the Alchemist) are completely blank states. So to liven things up we’ve completely made up the background of this specific version of the Vanquisher.

The Amazing and Stunning Shivangi is a one-woman circus. She’s a :

As a showwoman and entertainer she has considerable presence and charm, and excels at fast-talk and patter. 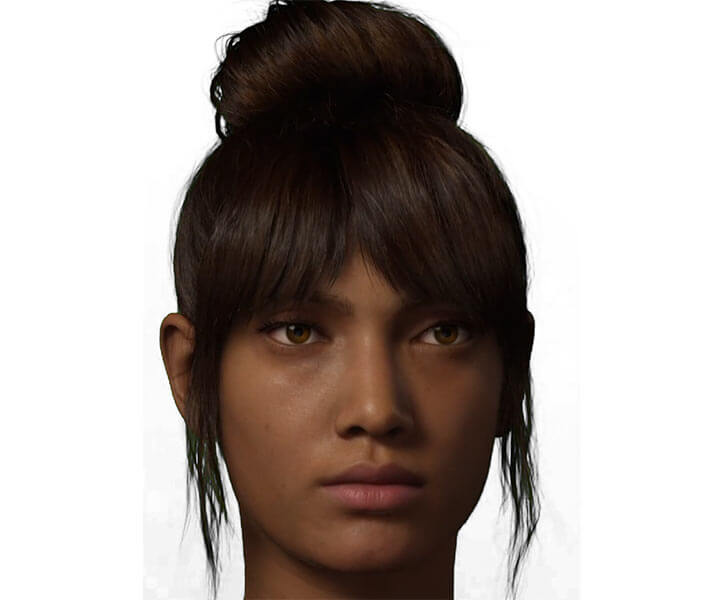 Custom portrait for this version of the character.

Her shooting tricks — usually performed with pistols and/or knives — are not just for show. She’s a genuine markswoman with most everything that can be fired or thrown. As well as a fighter with extensive combat experience.

Furthermore, she possesses psychic powers that allow her to bend her shots. And/or have them perform improbable ricochets off walls, random items and her foes.

The physics of her shots are obviously abnormal. Arrows can’t ricochet off stone walls three times to hit two opponents.

Even numerically superior opposition is not going to fare well against Shiv. Especially in confined quarters, where she can bank her shots.

The Amazing and Stunning Shivangi packs a pair of robust, well-made pistols.

Though firearms in Torchlight looks like flintlocks, these are single-action and fire magically-summoned bullets.

Like much of the magic and technology in the setting this is made possible by ember, a mineral imbued with paranormal energy. Ember also has mutagenic properties.

Shiv fights with a gun in each hand, cocking the left one whilst she fires the right one and vice-versa. Her guns are named Daein (“right”) and Baein (“left”). Though inexplicably Baien is her right-hand gun and vice-versa.

Being handy with clockworks, the Amazing and Stunning Shivangi has built a number of fléchetteA type of ammunition looking like a small metallic arrow traps. These are boxes that when activated fire a long burst of metallic slivers, like a machinegun.

Flechette traps are often used to lay ambushes, with Shiv running back to where the box is so her pursuers will be caught in its fire corridor. 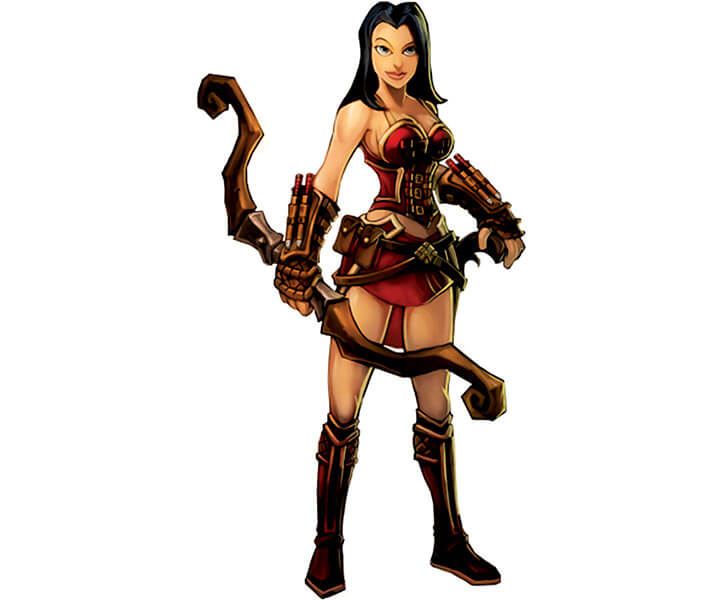 The Faithful and Cunning Subarna

Subarna (“golden”) is a large lynx with tan/yellow/white fur. She’s a constant part of Shivangi’s acts and knows an endless array of tricks, including :

Subarna is not a normal animal at all :

Subarna and the Amazing and Stunning Shivangi can communicate telepathically.

Subarna is an adept fighter. She’s much closer to a jaguar than a lynx in fighting techniques.

She knows some necromancy, using it to reanimate fallen opponents to serve as short-“lived” allies.

She can orient herself at least as well as a human person. For instance to run back to town, fetch something then run back to Shivangi.

Shivangi usually arranges with a reliable local merchant for Subarna to run to them with her loot, have the merchant take and appraise the items, then send the lynx back with the money they’re paying for the items.

Subarna is also trained to safely activate flechette traps with her paws.

Most of Shivangi’s talents are not her own. She may be genuinely talented, but she’s only 22. Most of her circus talents take years of intensive practice to develop.

What makes her a one-woman carnival is that she’s a sort of psychic vampire. Though she can only feed off people who are about to die.

The ability is usually performed to steal magical energy from her slain opponents and funnel it into something she has an affinity for, namely ranged weapons. The magic is usually channelled into the ember to have it create bigger bullets that go faster.

But it can also be used to reinforce other magics. For instance a set of arrows she once had that would magically burst in flames after they were shot.

If the dying person is willing, Shiv can absorb a part of their spirit. This heals spiritual damage she might have suffered, and allows her to acquire certain of their talents and skills as they pass on.

Her condition is contagious, but it takes years of constant proximity for this to occur. Her pet lynx is the only creature she ever actually infected.

It does add up. After eating a sufficiently large number of smarter-than-average rodents, Subarna developed actual intelligence.

Her form of vampirism also allows Subarna to mutate herself for a while when eating flesh saturated with magical energy. This is usually done by eating large fishes from areas with ember-contaminated water.

This is not a common situation. But when it occurs Subarna can, using her sense of smell, determine whether the fish is safe to eat and what form she’ll take after eating it.

Here’s a video test of a custom, photorealistic model for this character. Using the (in beta as of this writing) MetaHumans Creator technology.

I had originally gone with a lighter skin tone, so the custom-made character model would vaguely resemble the in-game model. But heh, screw it.

Anisha — who has only answered to Shivangi (“gorgeous”) for years now — is the last survivor of the Samarth Brothers travelling circus.

This familial troupe was almost 50 members strong. With many robust men to ensure security whilst travelling, and to assemble the tents.

Life as a travelling circus being tough and full of danger, the troupe had traditions about children.

Over 7 or 8 years, the ember’s mutagenic effects were sufficiently pronounced for the daughters to be more or less magical. Hopefully it was something useful for an act, or at least the little freak show.

Anisha was the luckiest one in quite a while. The ember’s shifty influence gave her useful paranormal talents. And didn’t physically deform her in the least. In fact it’s likely that it made her prettier. 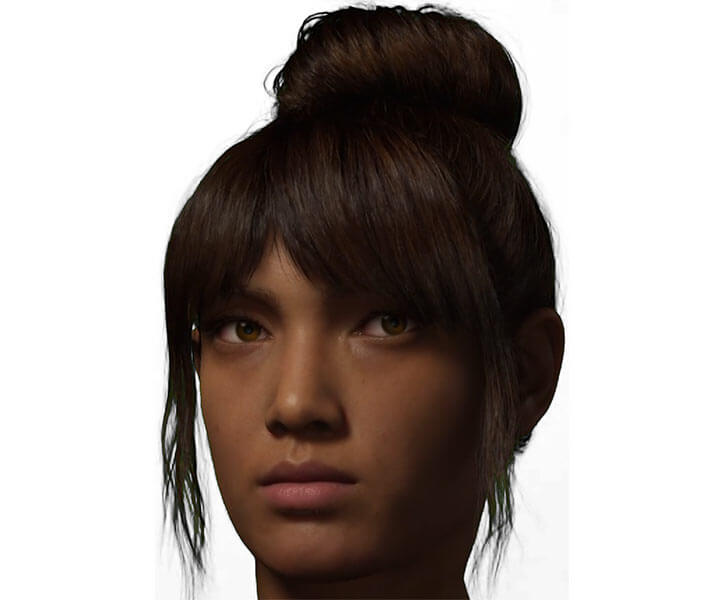 The Samarth Brothers endured for a remarkable three generations. But they were wiped out in a varkolyn  attack five years ago.

The victory of the bat-like creatures was pyrrhicA victory that cost so much that you’re worse off than before the battle at best. The handful of attackers left standing were killed by the last carnie, Anisha.

Both sides had been killed off to no one’s benefit but the carrion eaters’.

The show must go on

The teenaged Anisha could do little for the dead and dying. But the Ringmaster Samarth told her to drain the spirit of as many troupe members as she could, so something would be left of their hard work. Though sickened by the prospect, she dutifully complied.

By the end of the day she, and one of the pet lynxes who had somehow escaped from the burning animals wagon, were the only living things left in the debris.

Samarth Anisha — now the Amazing and Stunning Shivangi — has been a travelling entertainer since.

Simply reaching a village usually causes a crowd. Travel is terribly dangerous nowadays. Therefore, a lone girl travelling full time despite the bandits, the goblins, the wolves and innumerable other dangers is quite a sight.

The Amazing and Stunning Shivangi usually stays for a week, giving four show nights. Then leaves.

She will stay longer if she gets offers for mercenary work. It doesn’t take a genius to figure out that a sharpshooter travelling alone must be handy with violence.

Therefore, she has been approached in many places to handle some local monster or criminal problem. 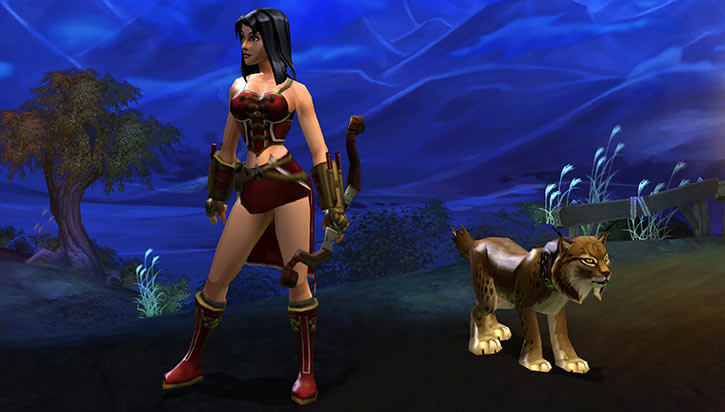 The Amazing and Stunning Shivangi dresses for show and emphasis, with tiny leather skirts open to one side and flattering leather bustiers. Well, weather permitting.

She actually travels in much more sensible clothing, but will change to her bright red leather tiny ensemble when reaching a burg. To advertise. 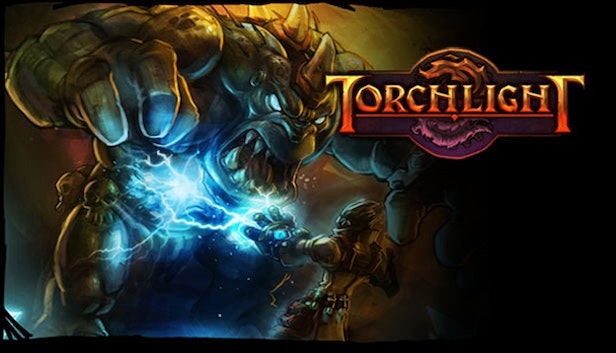 Anisha is practically always working. Like most artists and performers she labours for many hours to scare up very little income, and has a lot of expenses.

When in town she’s either giving shows or advertising. The rest of the time she’s alone with her lynx on the road.

She belongs nowhere, is a part of nothing and knows no one. And she is realistic enough to know that the offers she occasionally gets (usually marriage) are traps.

On the road again

Barring something weird she’ll live as a lonely itinerant carnie until she dies. This will presumably take place well before she’s too old to continue performing.

In this context merc work is her main chance out, albeit she cannot develop the most useful of assets – rep.

Though it’s obviously quite risked, violence-for-pay is her main chance to get enough money to gain some control over her life.

She does it as best as she can to teach herself how to look professional, experienced and reliable. 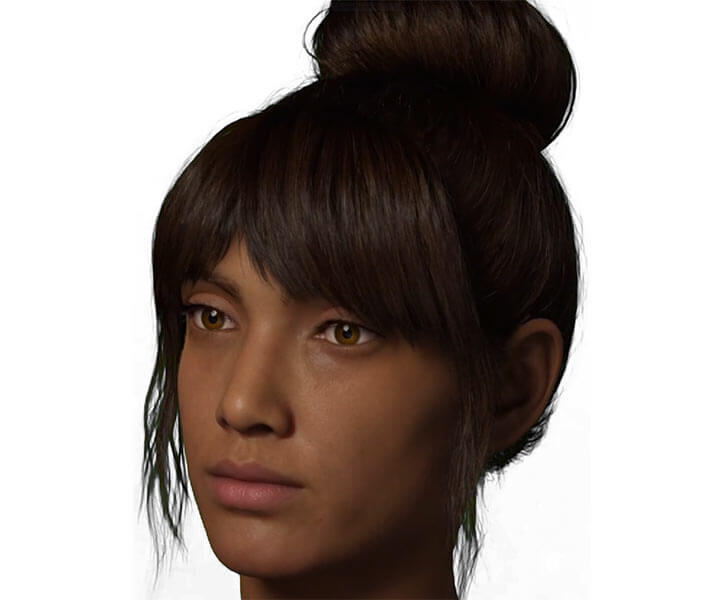 The Amazing and Stunning Shivangi… 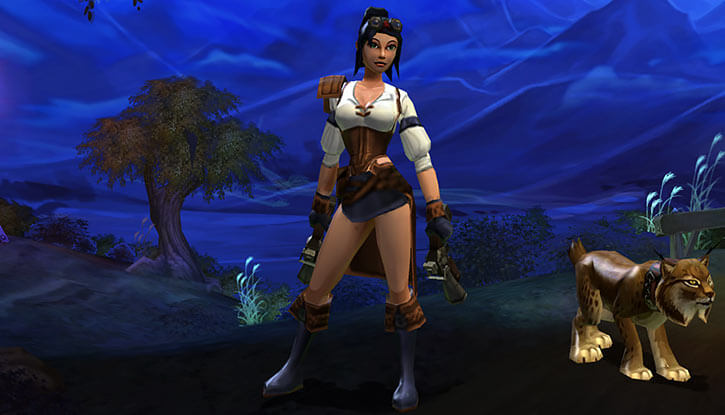 … and her companion the Faithful and Cunning Subarna 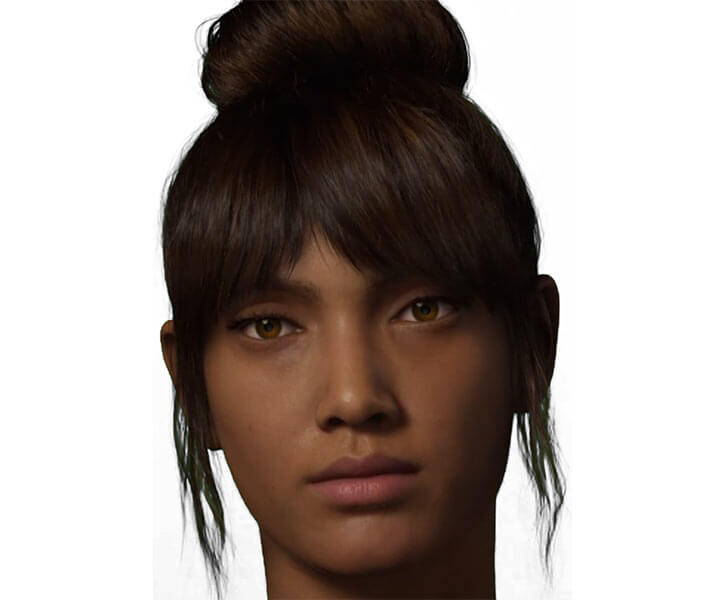 As usual when adapting characters from video games with an equipment treadmill, the abilities have been gisted – and often turned into skills/powers.

This entry takes even more liberties with the video game abilities than usual, since those don’t always work too well in a pen-and-paper RPG context.

The “acquire talents from dying people” thing is handled through normal experience/character advancement. It *could* be a Power though, using mechanics akin to the Photographic Reflexes Power.

For more about modelling video game characters, see the FAQ.

Source of Character: Inspired by the first Torchlight video game.