Torque has no superhuman power. But he was a decent detective and a very, very good wheeler and dealer in a high-risk environment.

“Deadly” Soames earned his nickname in part because crossing him was a very bad idea, but also because he was very good with guns. As a cop, he always packed a pretty big magnum – when loaded with speciality ammunition and shot point-blank, it was sufficient to wound Blockbuster, but not to slow him down. Now, Torque usually packs a vintage Thompson with a drum magazine.

In combat he’s an excellent marksman, fearless and highly aggressive. Torque is quite capable of slaughtering a superior force of armed men. He can even do some fancy trick shooting with a modified nail gun.

In general his sheer, maniacal intensity and ruthlessness make him very dangerous.

Inspector Dudley “Deadly” Soames was a legend in Blüdhaven – a man walking casually on the razor’s edge. He was the chief of police’s errand boy. As such he acted as a fixer, hitman, problem-solver, and underworld relations officer.

But he took that post to the next higher level, working for *everyone*. That included mob factions, the police and presumably others like the Mayor. Soames maintained a perilous equilibrium where no one would go after him due to his string-pulling and political power plays.

Who you gonna call ?

Circa 1996, Blockbuster stealthily replaced Angel Marin as the local crime boss, Soames was one of the very first ones who realized what happened in the shadows. He leveraged this realisation into becoming something of a consigliere for Blockbuster.

His job as police liaison for organized crime made him indispensable. And with his tortuous machinations, Soames often provided excellent info and facilitation when his and Blockbuster’s interests coincided.

However, these power dynamics turned back on Soames when he failed to eliminate Nightwing as per Blockbuster’s orders.

Soames’ agent, the Scarecrow, confessed what he knew to Nightwing under interrogation. Soames was suddenly a problem, and chief of police Redhorn was obviously not going to cover for him. Blockbuster sent a trio of killers to ice Soames, but “Deadly” Soames killed them. At this point, he had very few options left to ensure his own safety.

Aware of most secrets of Blüdhaven, he knew where Blockbuster’s aged mother lived. Soames barged in to take her hostage. Soames was confident in the power of his magnum and special ammo, but these couldn’t stop the furious Blockbuster. To save his mother, the giant mobster grabbed Soames and twisted his head around, apparently killing him.

By some kind of freak miracle, however, Soames survived. One Dr. Pavaar managed to keep him alive – although Soames’ head was stuck facing backward. Even her considerable skills could only go so far, though, and Soames was mostly paralyzed. Experimental drugs that could restore his nerves existed, but were unavailable.

To heal Soames, Pavaar had him declared dead by substituting a John Doe corpse for him. She then had Soames enter the clinical testing protocol for the new drugs. She later supervised his long reeducation to he could learn to coordinate with his unique condition.

Pavaar also had a special neck brace and system of glasses built, that would allow Soames to look in front of him as if his eyes were in their normal position. Soames, however, hated her for keeping him alive as a freak. Predictably, he killed her by strangulation once his reeducation was over.

Soames, who went under the nom de guerre of Torque, was now a lone wolf. Yet he came back to Blüdhaven, driven by a maniacal thirst for vengeance.

He would break everyone — police, criminals, heroes — and become the underground king of the city. Torque started hitting organised crime hang-outs with unhinged ferocity, using a vintage Thompson submachinegun. He occasionally ran into heroes like Nightwing or the Huntress, but always escaped.

Soames’ crusade of blood put the underworld in disarray. But a better opportunity then emerged. An Intergang lawyer was in town, to assess Intergang opportunities in Blüdhaven. There was much ado about this, but Torque got to him first.

Soames kidnapped the lawyer, nearly killed Nightwing and Nite-Wing, and blew up the office with a bundle of dynamite. This left an unidentifiable corpse that was assumed by all to be the lawyer’s.

Torque, using a mix of psychological torture and negotiation, then convinced the lawyer to put him in contact with Intergang. He offered to be their scout and main agent in Blüdhaven. His vast knowledge of the town’s underworld certainly made that viable.

Torque thus led local Intergang assets during the period when Blockbuster was greatly weakened. He eliminated potential new crimelords such as the Irish mob. That was an unusual level of overt violence for Intergang, but par for the course in Blüdhaven.

Soames also managed to slip into Blockbuster’s house. Once he found the terminally ill crimelord, he decided that his vengeance would be better served by letting him slowly die. Torque thus walked away without executing Blockbuster.

Things come to a head

Soames next underwent a psychotic meltdown. He single-handedly assaulted the police department, taking his successor hostage. He caused vast mayhem, using a powerful Intergang energy gun against the police.

Although his demands were incoherent, he was on top of the situation until Nightwing engaged him. This gave Cdr. Michaelmas, the ESU commander, a shot at Soames. Soames survived thanks to his concealed vest, but was arrested.

He managed to escape relatively quickly from prison, along with Tad Ryerstadt (aka Nite-Wing). His cunning plan involved slipping medication in to one of the guard’s soup – a gigantic man known as Amygdala. Amygdala’s emotional problems were kept in check by drugs. Both chemicals interfered, and Amygdala’s rampage allowed Torque and Nite-Wing to escape.

But Nite Wing eventually realised that Torque was a criminal. He confronted Soames while they were together in their subway hideout. During the altercation, Soames took two bullets in the chest and died. His corpse was found weeks later by Nightwing.

Torque is out for revenge, carnage, manipulation and grand power. And he’s driven by a fearsome, maniacal intensity. He’s smart, manipulative, brutal, confident and nigh unstoppable in a firefight. *Furthermore*, he’s ruthless and highly proactive, deploying his vicious lone wolf strategy to the top without losing any time.

He’s also pretty good at cunning, complex plans. One example was having an accomplice fake a drug overdose in order to slip into the infirmary and research drug interactions that could neutralise Amygdala’s mood stabilisation ℞.

He’s also afraid of nothing, resourceful, very bitter and a good strategist. Furthermore, his solid amount of Hero Points  allows him to pull off incredible stuff for a middle-aged guy with an old machinegun.

Shortly before being arrested, Soames was slightly retconned as having Irish ancestry. As a result, he started employing comic books Oirishisms such as “me boyo” or “laddie”.

Connections:
Street (High). While in prison he had Nite-Wing as a Low connection. 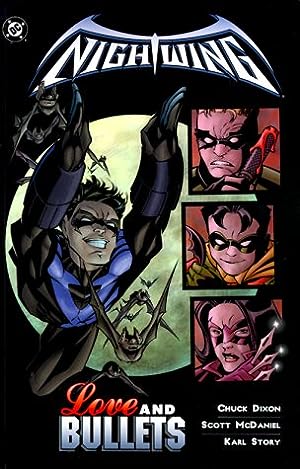 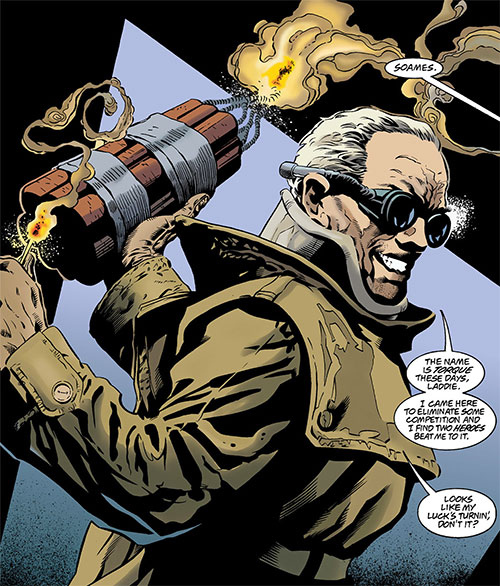