In addition to his great strength, Torque’s endurance and resistance to injury was significantly greater than that of a normal human. His body was capable of resisting small arms fire from a great enough distance.

Torque was a capable mechanic.

John “Torque” Torkelson was busy repairing a faulty crankshaft when a group of youths approached old man Mur’s garage. Though he was prepared to simply send them away, he decided to at least speak to them when he realized that 3 of the 4 teenagers were girls.

Minutes later, his curiosity turned to anger when the male (Pete) asked him if he had written a letter to the Harbinger Foundation. Thinking that someone was pulling a cruel prank on him, Torque gruffly told the group to go away.

Three of the four teenagers left, but one of the girls remained behind. Flamingo (as she called herself) was clearly attracted to him and tried to convince him to at least spend some time with the group.

She also told him that one of the group, who called herself Zephyr could fly. Torque’s curiosity was peaked once more, and before long he soon found himself riding alongside them in his car.

The teens, who were clearly on the run, were taking shelter in the ruins of a nearby abandoned building. The five teens spent the night simply hanging out and chatting. During that time, Torque found himself growing more and more attracted to Kris (Pete’s overly serious girlfriend).

When he finally got tired of Flamingo’s obvious flirting, he got up and made a pass at Kris. 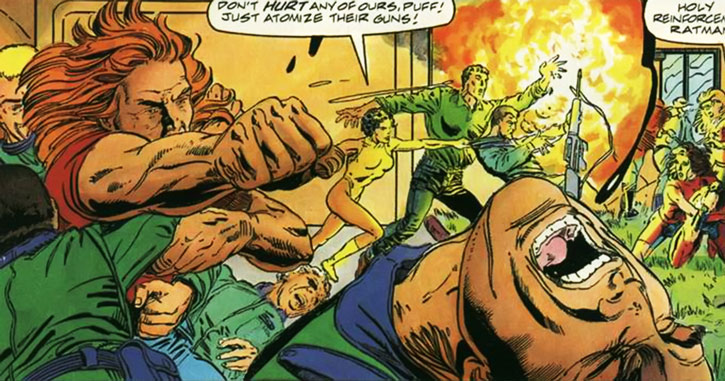 In retaliation, Peter not only accused Torque of working for the Harbinger Corporation but he also used his psionic abilities to force his way into Torque’s mind. Though Pete’s mental intrusion only lasted for a second, the pain from the attack and violation that Torque felt drove him into a murderous rage.

Without thinking, Torque reached out, picked up his car high over his head and prepared to crush Pete with it.

It was only Kris’ presence at Pete’s side that stopped Torque from striking Pete with the car. As he tried to convince her to get out of the way, Pete gave him a heartfelt apology. It was at that moment that Torque realized what he was doing.

With his rage back under control, Torque gently lowered his car to the ground and started to puzzle out what had happened. When Pete invaded Torque’s mind, he had unwittingly triggered Torque’s latent Harbinger abilities.

Pete then apologized to Torque once more, and let Torque know that he had seen the abuse that Torque had suffered at the hands of his guardians over the years. Torque had little time to make sense of the situation as at that very moment, the Harbinger foundation attacked the group of renegades.

When he saw that Kris was in danger, Torque threw in his lot with the Peter and the Renegades. He attacked the Harbinger forces with all of his strength and instantly earned their enmity.

Torque spent the next few months fighting alongside the Renegades. They assaulted a handful of Harbinger Foundation locations; they stole money and information as needed, fought X-O Manowar, encountered the Spider Aliens and even met Solar during an attempt on Harada’s life (they obviously failed).

As the months passed, Torque grew closer to the group particularly Kris. She spent a lot of her free time with Torque talking, laughing and teaching him to read. In a moment of weakness, the two finally gave in to their mutual attraction and slept together. Unknown to either one of them, Kris was impregnated at that time.

Peter’s Renegades went from being an annoyance to a viable threat after their failed attempt to take Toyo Harada’s life.

Though they were not successful, they came very close to being so and Harada in response sent a team of his elite Egg-Breakers (super powered operatives) to murder them all.

The assault took place on a deserted highway, while Pete and his Renegades were returning their home. The Egg-Breakers’ attacked in unison and quickly separated the teens. Torque himself was rendered temporarily helpless by an Egg-Breaker named Flashbulb, who used his powers to blind him.

Enraged, Torque followed Flashbulb into the tree-line at the side of the road and was promptly ambushed by yet another Egg-Breaker named Rock. 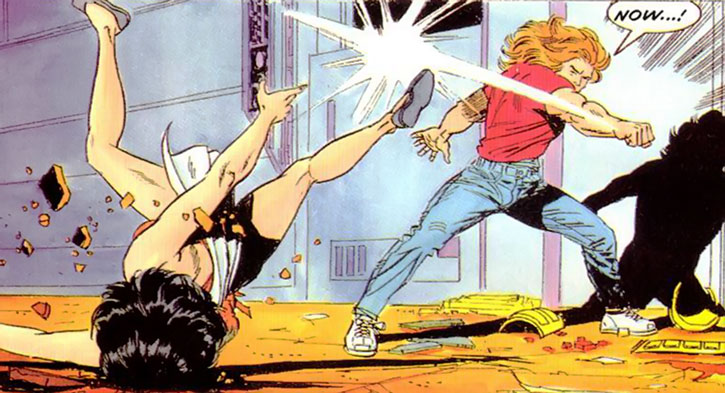 Rock and Torque had fought twice before and built a short but intense rivalry. While Torque was blinded, Rock approached him silently from behind and stabbed Torque repeatedly in the back with some sort of awl. Helpless, Torque succumbed to his wounds and passed out.

Pete chose that exact moment to appear in the forested area, and Rock retreated before he could finish Torque off. An ambulance arrived shortly thereafter and Pete and his friends loaded Torque into the back of the emergency vehicle.

Unbeknownst to them, the ambulance was another Harbinger set up. Weasel (yet another Egg-Breaker), disguised as an EMT, administered a fatal dose of poison to Torque’s unconscious form before Pete could stop her.

As he lay on the gurney dying, Torque felt his Peter enter his mind for a final time. The two shared an awkward goodbye after Torque told Peter to keep an eye on his girl.

Torque didn’t live long enough to witness the repercussions of his actions, but if he did he would have been proud. His indiscretion with Kris produced a son, who would eventually be lost to the future during the Unity conflict, and grow into mankind’s greatest hero – Magnus Robot Fighter.

Torque was a truly mammoth young man. He was a least a head taller than most men, had a thick barrel chest and impressively muscled arms and legs. He wore his long red hair loose down to his shoulders and rarely bothered with clothing, short an old pair of blue jeans.

While Torque’s sheer size could be off-putting, it was his demeanour that truly made people shy away from him. Torque rarely smiled and radiated hostility.

Contrary to outward appearances, Torque was a fearful young man. He was afraid that people would think he was stupid, that they would prey on his vulnerability and that they would ultimately abandon him once he started to care about them (these fears were most likely born of the abuse he suffered while growing up).

Rather than face his fears, Torque affected an air of open anger, hostility and indifference that drove most people away. He treated anyone who would dare to get close to him like trash, especially if they were women. Them, he treated like disposable items.

It was only after he met the Renegades, and more specifically Kris Hathaway, that he began to let his veneer drop. It was a bumpy road; he vied for the position of Alpha male with Pete initially, taunted Faith over her weight and treated Flamingo like a trollop.

However, over time their shared experiences with the Harbinger Corporation and the way that they fought for one another caused him to drop his guard and eventually show his true feelings.

Before he died, he managed to form real bonds with each member of the small group. He apologized to Flamingo for the way he treated her, let Faith see his true nature and told Kris he loved her. And in the end, he even let Pete know that he respected him.

In combat, Torque filled the role of the “Big Guy” with vigor. He often acted like a bulwark in combat; he allowed the teams enemies to hit him (because he could take it) while Pete and the others fought back from a distance.

“Beat it before you lose some teeth.”

“I’m going to sleep in the car babe… I mean… Kris. You can join me if you want. Maybe we’ll both learn something.”

Flamingo: “You want me to fetch another beer, Torque, honey ? Or… do you want little old me ?”
Torque: “You, I can have anytime. This is good beer…”

“She was trying to make me feel ignorant. She could see I couldn’t read the menu…”

“I treated you like dirt for a long time. Took out my own problems on you. I’m sorry, okay ?” 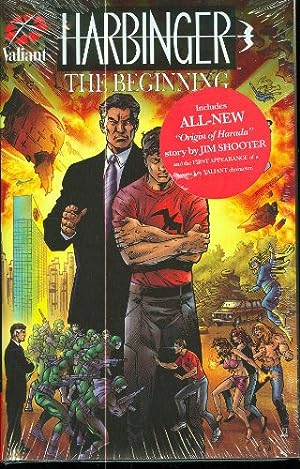 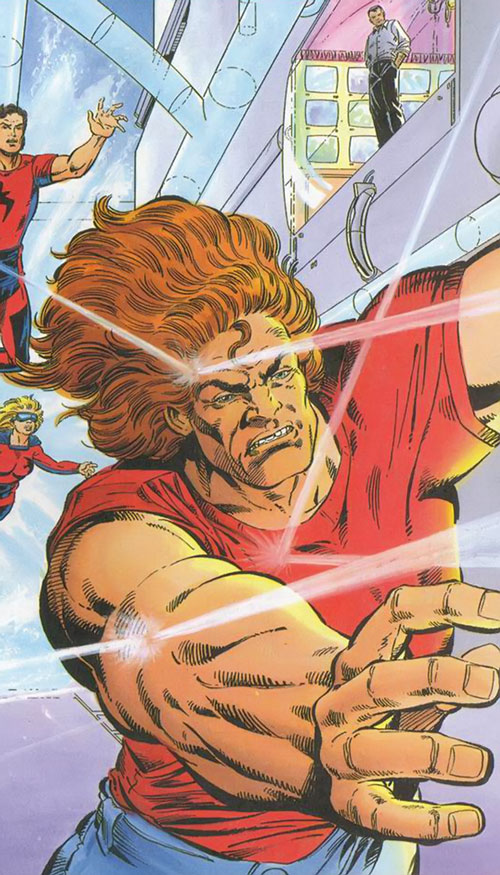 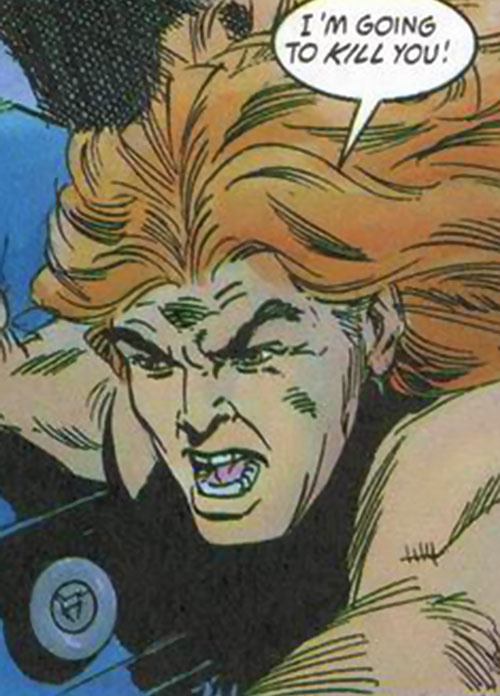 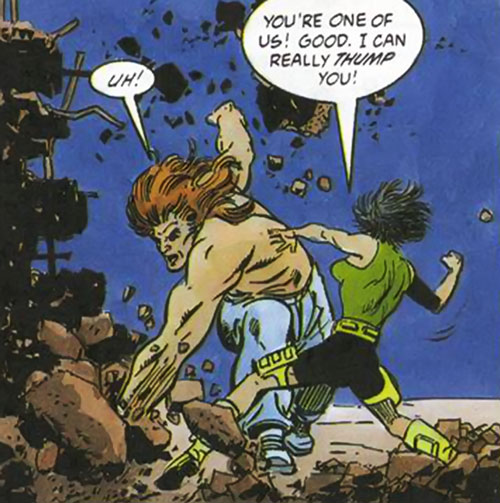 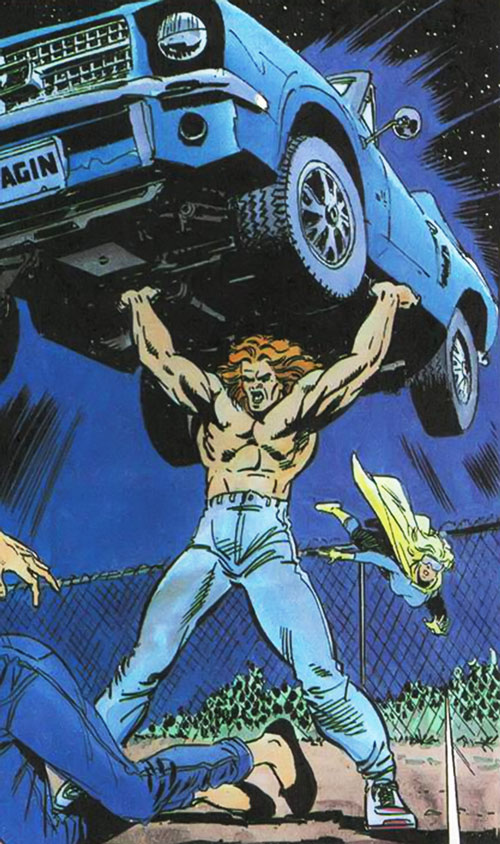 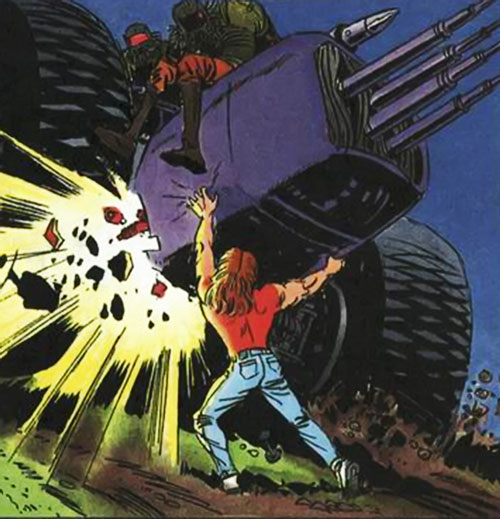