Tötentanz has superhumanly fast reaction time, ability to mentally and physically act, and ability to process sensory input. He cannot run at superhuman speed, but this appears to be among the only things he cannot do at a heightened level.

His preferred weapons are a pair of steel spears, with which he has killed more superhuman targets than anyone else on Earth.

There was a time when the man named Klaus Kleisner was a happy and well-adjusted engineer designing automobile chassis for Daimler-Benz. That time ended when he met a beautiful American woman named Erica Ellis. Ellis told Kleisner that she “wasn’t dating,” but the two spent a great deal of time together and over the space of several months, she began staying most nights at his comfortable home outside of Munich.

Kleisner fell in love with Ellis and then fell further, into obsession, as she seemed both to be dating him and maintaining an almost cruel aloofness that he found maddening.

As time passed, Kleisner sensed that Ellis was lying to him more and more frequently, a possibility that haunted him even in his dreams. When he asked her if she had slept with any other men during the eight months they’d been seeing each other, she replied, “Of course I have. Four of them, in fact: but I told you we weren’t dating, so don’t act surprised.”

When she proceeded to give him the graphic details of her experiences with the four other men, Kleisner’s gut twisted and he vomited.

The unmitigated rage and sense of betrayel elicited by Ellis’ casual announcement triggered the explosive eruption of Kleisner’s superhuman powers. In that fraction of an instant, Kleisner turned off his emotions entirely and erected walls around his psyche that are nearly impenetrable.

Now, as Tötentanz, he is a shark in Nova skin, swimming ceaselessly through the carnage and violence of combat because he suspects that if he stops, he’ll drown in his own festering rage.

Tötentanz dresses in all black except for his golden skull mask and gold belt. He carries long steel spears on him when in combat. Under his mask, he is “the Aryan ideal” – tall, muscular, blond haired and blue eyed.

When not in the battlefield, he follows an ascetic and almost compulsive regimen of physical training and meditation. He eschews any and all relationships, preferring solitude to the company of others. He reserves his true scorn and disdain for those who weaken themselves with junk food, cigarettes, alcohol, or drugs, and he takes a particular enjoyment in killing those elites (superhuman mercenaries) whom he feels have weakened themselves by indulging in stupid and self-destructive vices.

He is extremely professional in all his business dealings. He is punctual, cordial, and he listens attentively when given an assignment. Beyond this, he has almost no interaction with others beyond taking assignments and training other Elites at the Devries Agency Windhoek compound.

“Ich bin der Hammer, der Dolch, die Sichel, die alles niedermäht.” (“I am the hammer, the knife, the sickle, all tools of the slaughter”)

In the Aberrant world, this guy is controlled only by his unwillingness to feel anything. If he had the Power Lust motivation, he’d be among the top super-villains in the world.

In the DC Universe, he might begin by killing Deathstroke the Terminator and move up from there through the Titans and perhaps onto an assignment to kill their mentors in the JLA. He might also be the secret offspring of Captain Nazi, although that’s a bit cliché.

Drawbacks:
Catastrophic Rage, SPI, MIH (those perceived as “decadent”), Miscellaneous: Tötentanz’s DEX, INT, and WILL are all superhumanly enhanced and drop to 4 APs each if his powers are neutralized.

Source of Character: Based on character from Aberrant: Elites (White Wolf Games). 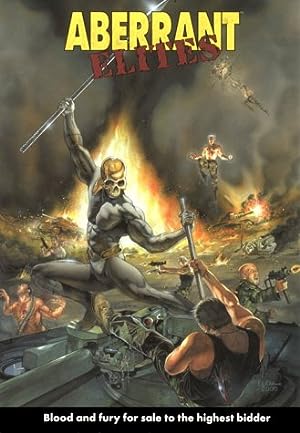