In addition to the normal Morituri physical enhancements, Toxyn can synthesize and secrete any kind of poison she wants.

This means anything from an anesthetic, to a paralyzing agent, to a deadly nerve toxin. However, she has to make physical contact with the subject first to analyze its body chemistry before she can affect it.

Ruth Mastorakis apparently volunteered for the Strikeforce because of a soured relationship. She was involved with a man called Nikos who for some reason was unable to marry her. To make matters worse, instead of just turning her down he beat and humiliated her in front of her friends and family. Ashamed, she volunteered for the Morituri Process.

A member of the third generation of Morituri, she joined the team after the first attack on a Horde mother ship and performed with distinction. Though she disliked having people look to her for guidance, she often took charge when the situation required it.

The Morituri Effect eventually caught up with her after a raid on a Horde spaceship, the same raid which freed Jason Edwards (Revenge). Edwards help Toxyn rejoin her teammates after she injured her leg during the raid.

Toxyn and Revenge felt an immediate attraction for one another, but as fate would have it no sooner had they expressed their feelings than the Effect caught up with Toxyn and she exploded.

A medium-sized woman with curly, shoulder-length blond hair. She wore brown tights with green shoes and a green tabard with wide brown belt and collar (looked a lot like a Ren Faire outfit ). She had brown gloves with gold fingers.

Toxyn was a team player who always tried to give her best to the team. If someone else had an idea or was taking charge, she went along. If no one seemed to have an idea, she was willing to step forward and lead the way.

She greatly enjoyed using her powers, often kissing her enemies into unconsciousness.

“But we don’t have the right to endanger innocents, Lou ! They represent all those who we were created to protect.” 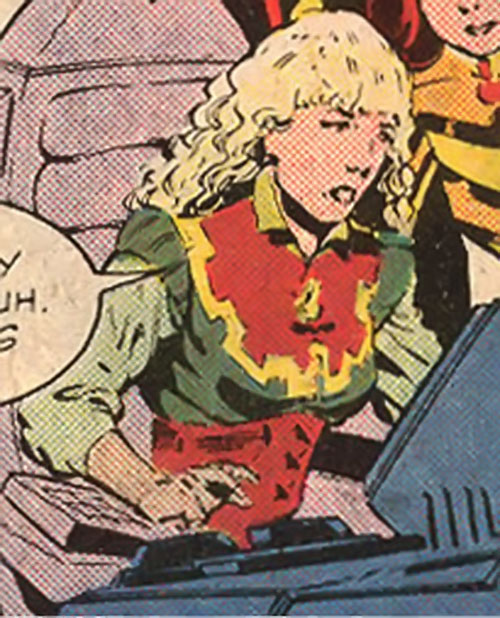 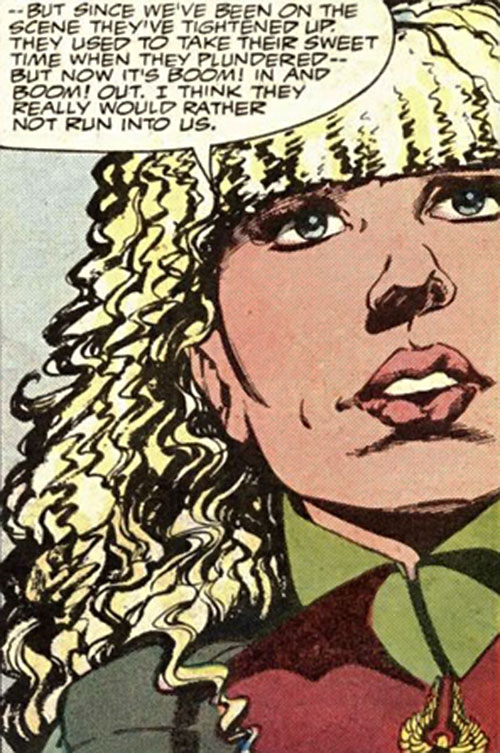