Robyn is fresh out of the police academy, though she now has a few weeks of practical experience in the field. She doesn’t have genuinely noticeable physical skills or ability. Although she’s pretty good at not being hit.

Robyn has a toybox full of obedient toys – mostly boy stuff such as tabks, helicopters and soldiers. She can give them detailed orders – such as ordering warning shots, calling shots, having a bunch of toys Team Attack to search an area for clues without disturbing the crime scene, etc.

She seems handy with science and engineering, but has always credited the toys to her father, Colonel Lilliput. Robyn’s part in maintaining her toys and designing new ones is unrevealed. It is possible she is self-effacing and prefers to credit her father who designed the original toys.

Robyn’s deductive leaps have an uncanny ability to land on their feet. If she hazards an explanation about a problem, it is very likely to be the correct one. Even though it appears to just be a shot in the dark.

In DC Heroes EPG terms this is modeled in part by her large WIL score (to deduct correct conclusions from information), and in part by her Scientist (Observation) Subskill.

More generally speaking, when Robyn’s player take a wild guess about the nature of something, the GM should consider making her explanation true. As long as it’s as cool or cooler than the explanation the GM originally had in mind.

Robyn Slinger is the daughter of famous Golden Age science hero Colonel Lilliput, who is now senile. She became a legacy hero, using the toys built by her father as her “power” and calling herself Toybox.

For unknown reasons she decided to become a police officer. Once she got out of the police academy, she was sent to the Top Ten station to start working.

For subsequent events read the series, cause it’s damn good.

Robyn is a nice, patient young woman. She seems to be a bit shy.

She doesn’t act at all like you would expect from a police officer, and she doesn’t look like one at all, either. She’s more like a weird but nice and smart girl from the college, who doesn’t speak loudly and likes to have friends. The reasons why she became a cop are a complete mystery.

She certainly seems to be determined to be a good officer. Robyn makes great efforts to be liked by her fellow cops, even rude asocial curmudgeons like Smax – though Smax can quickly annoy even her. She is tolerant, and seems to have a quiet sense of wonder. She’ll happily go along with whatever weird local customs and odd adventures may happen.

Robyn’s kindness is obvious in her relationship with her aged father, who has Alzheimer’s. She lives with him (which basically means she has no private life) and arranges for neighbours and friends to care for him when she’s working.

When addressing her toys, she speaks like a military commander from a 1940s action movie. Presumably the toys’ personalities react best to this, since they mostly are boy’s toys.

People with an enhanced sense of smell, such as Sergeant Caesar or Syn Jackson, have all noted that Robyn smelled nice.

(To an angry robot bystander) “Nobody is blaming Ferro-Americans, sir. C’mon… move back.”

(To her toys) “OK men, fan out and cover the area. Report on anything out of place.”

Dwarf : “Ah but, with respect, miss, Morningbright is a *dragon*.”
Toybox : “Yeah. And a murderer, a child abductor and an industrial-strength polluter. And I’m a police.”

DC’s closest equivalent to Neopolis might be Superbia, the high-tech city built by the Ultramarines and hovering high above the ruins of Monte Video. The opening of relations with other realities might explain why things have been quiet there.

Robyn herself would presumably be the daughter of the Toyman, or maybe even his grand-daughter. Or niece.

Equipment:
Toybox [BODY 04, Note : may be a tesseract – I’m notcertain all of her toys can actually fit into that volume].

Toybox has a large number of intelligent, animated toys constructed by her father. They are all treated as pets. She seems to have a wide variety of toys, but the two main types she use are her Hueys and her Chieftains – war toys.

The Hueys are toy helicopters, about as big as a non-flat 15” monitor. Most seem to have a pair of humanoid, white-gloved, cartoon-style hands holding a pistol, and various toy-like features like a face, bright colours, etc. Robyn seems to have 4 Hueys – maybe three after one was destroyed by Doctor Gromolko.
The likely stats for a Huey are [DEX 04 STR 00 BODY 04 INT 01 WIL 01, Flight: 04, Projectile weapons: 05]

The Chieftains are toy tanks, about the same size as a Huey. Some have tracks, some have Robotix-style legs, and all look like obvious toys. The likely stats for a Chieftain are [STR 01 BODY 06 INT 01 WIL 01, Running: 03, Projectile weapons: 04, Vehicles (themselves): 04, Weaponry (themselves): 04]. 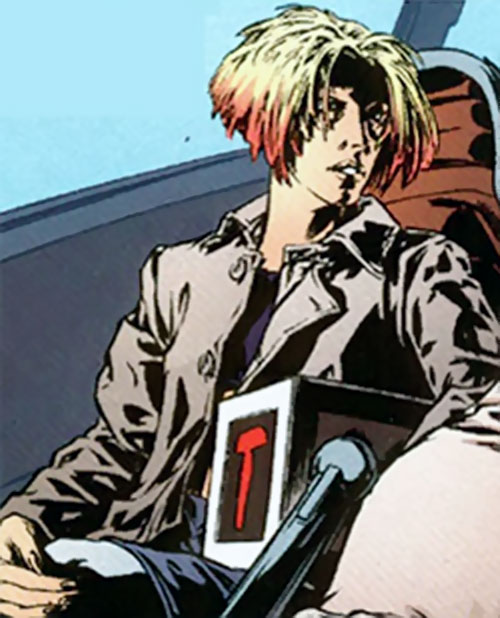 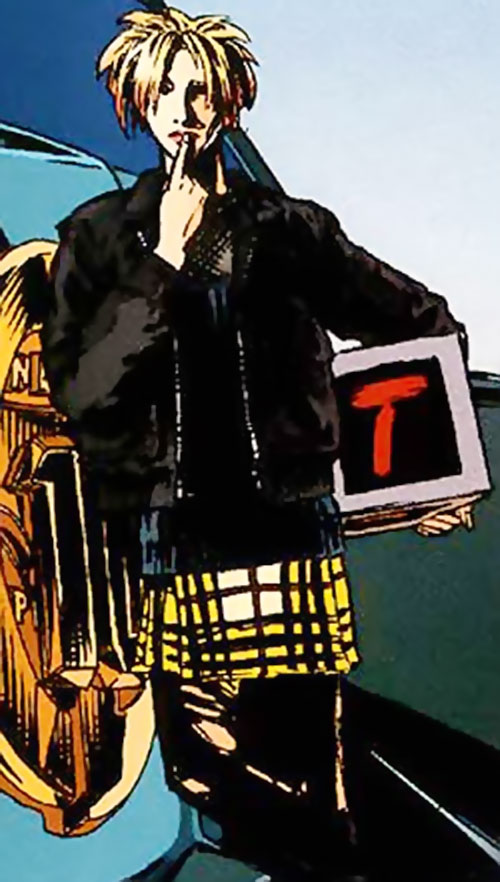