The surgeries his ravaged body underwent left Tracer with:

An Angorian soldier, Vincent Cade quickly discovered he wasn’t cut out for the role during his first time in action, in the Iranian war. He broke and ran away.

Severely injured, his broken body was used for experimentation in the Experiment House. He was also forced to experience hours and hours of violent images, mood-altering drugs, and subliminal audio. This turned him into a psychotic killing machine.

Dispatched on a covert mission with other enhanced soldiers, Americommando and Eagle, his programming quickly became overwhelming. Tracer killed Eagle, and would’ve been killed by Americommando had Lord Havok not intervened.

Helping him regain a degree of stability, Lord Havok arranged for Tracer to work as an assassin for the underworld. This was a way to vent the aggressive impulses Cade still suffered from.

Tracer also served as one of Lord Havok’s Extremists. He began a relationship with team mate Dreamslayer.

The United States of Angor were incensed at Lord Havok’s taking over of Slovekia and execution of the royal family. Thus, President Americommando threatened invasion – even without the sanction of the International Council.

Gathered in Slovekia, the Extremists captured the multiverse-travelling Challengers from Beyond – Jason Todd, Donna Troy, Kyle Rayner, the Jokester and ’Bob‘ the Monitor. They believed them new members of the Meta Militia.

The Extremists were disabused of this by the arrival of Barracuda, the Extremist’s spy in the Meta Militia.

Soon after, Monarch appeared with some of his cross-dimensional super army, inviting them to join him.

They refused. A brief fight ensued between the Extremists, Monarch’s army, and the escaping Challengers. In the fray, Barracuda was killed. The Challengers escaped, and Monarch withdrew, making a temporary alliance with Americommando.

When the team returned to their lives, Tracer received a job from his current boss to eliminate some competitors. But when he went where directed, he found himself ambushed by some of Monarch’s troops, including Herr Superman and the Bizarro Wonder Woman.

He initially did well against them, until the Bizarro Wonder Woman got her lasso around his neck.

Left badly beaten, he was recovered by Lord Havok. Tracer awoke in time to face the Meta-Militia’s attack on Slovekia. The Meta-Militia, led by Americommando, and aided by Monarch, broke through the field surrounding Slovekia.

The remaining Extremists fell quickly before them while Lord Havok remained ensconced within his lab.

The invading force finally entered it to discover themselves in a large empty room. This place neutralized the powers of all within except the Extremists, who’d freed themselves and followed them in. The only enemy survivors of the ensuing slaughter were:

Returning (most of) Monarch’s power, Lord Havok agreed that the Extremists would serve him.

Joining Monarch’s army, the Extremists were part of the invasion of Earth-51. It eventually went bad when Superman-Prime arrived. He breached Monarch’s armour, causing an explosion which annihilated all life.

Before it could take them, though, Lord Havok used the fragment of power he hadn’t returned to Monarch to teleport the Extremists safely back to their own universe. There they took up residence in a base he’d constructed within the Moon, from where he could observe the Multiverse and make plans.

Usually calm and reserved, Tracer still possesses the violent tendencies programmed into him. These are certainly useful in a fight. He needs to vent these urges regularly, so takes jobs killing criminals for other criminals to allow him to work this aggression off without harming the innocent.

He remains loyal to Lord Havok for saving his life and sanity, and sees Louise (Dreamslayer) as the one good thing in his life.

Tracer being a counterpart of Sabretooth in the Marvel Universe, the Extremists might do best as being from an alternate reality.

Or he could be the result of a splinter Weapon X project to make more controllable versions of their popular models. 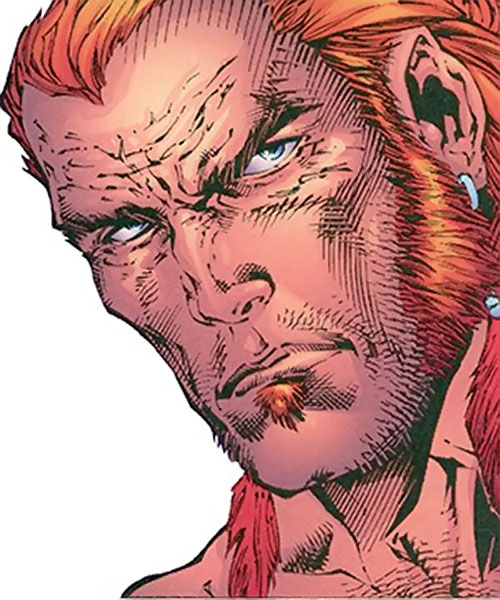 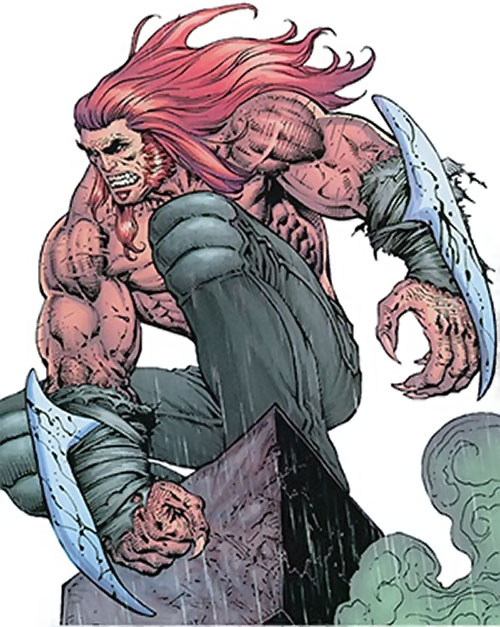