Bloom has turned himself into a cyborg. He seems to have enhanced physical abilities and the power of Flight built-in. This is difficult to say, since when Tracer goes in the field he has been extensively configured to confront a specific opponent. Bloom’s body and the basic SUIT are a dock upon which to anchor additional equipment, weapons, sensors, etc.

Tracer’s payload thus varies from mission to mission. The procedure is a lengthy one :

Depending on the quality of the data, these simulations may turn out to be accurate rehearsals… or actively detrimental to performance in the field.

From one diagram, it seems possible that Bloom has low-key regenerative and anaerobic capabilities. In DC Heroes RPG terms, that likely would mean adding 1 AP in Regeneration and Water Freedom.

Eyes in the sky

A key asset is a flotilla of invisible sensor drones monitoring superhuman activity, presumably chiefly in the New York City area. This is what provides much of the data to set up Tracer, unless other sources of detailed information are available. In DC Heroes RPG terms it results in a Familiarity with superhumans.

The data that can be gained is not always the best, though. On one hand, his team managed to determine that Spider-Man (Peter Parker) had some sort of early-warning system. But on the other, they did not seem to understand how strong certain superhumans such as Namor, Titania, Wonder Man, etc. are.

Rick Bloom is first and foremost the son of the great, late David Bloom. David was a Jewish-American near-genius and successful industrialist who built weapons technology manufacturer Bloom Industries nearly from the ground up.

A charismatic captain of industry and a superb technologist, Bloom managed about 12,000 persons – chiefly in Stamford, Connecticut. David Bloom having been born in 1957, his company presumably found its legs circa 1980.

However a recession — either the 1981 one or the 1990 one — hit Bloom Industries hard. The company never quite recovered, slowly spiralling into debt despite Bloom’s desperate efforts. Though the financial orthodoxy would have been to fire workers, David Bloom was very protective of his staff. He refused to destroy jobs in the middle of a bad employment market.

Bloom tried to find a way to deleverage without destroying jobs or assets. After observing how key companies such as Stark or Roxxon handled the economic shock, he dabbled in an extremely lucrative market – superhuman enhancement. In complete secret, he used his skills to draft and prototype technology that could turn persons into cyborgs that could interface with Bloom Industries equipment. 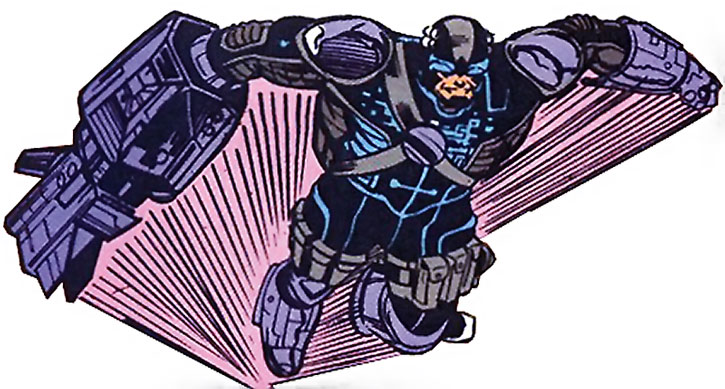 (Marvel’s Dark Reign Files interprets a caption as meaning that Mr. Bloom used data from Stark, Stane and Roxxon to build the Tracer tech. But my reading is that David procured business intelligence about the activities of these companies about superhumans).

In 1991, David Bloom was killed during a fight between unidentified superhumans. Having very little to work with, the FBI soon closed the case as a probable accident.

David Bloom’s only family was his son Richard. Mrs. Bloom had died when Richard was three. Like his dad, Rick was an engineer, and had been at this point slowly working his way up in the Bloom Industries ladder. To his surprise, Rick discovered that his father had willed the entire company to him. He thus ended up the CEO of a beleaguered large company overnight.

Whilst going through the records, Richard discovered David’s secret projects. Still dismayed that the FBI had dropped the investigation, Richard jumped to the conclusion that his father had been murdered by a superhuman operative. He assumed that the murder had been committed so David wouldn’t become a presence in the metahuman world.

Bloom decided to have his revenge against all superhumans as part of a quest to discover who had killed his father. He launched a project to enhance himself using his father’s notes. As he did, he discovered that there existed a huge market for the elimination of certain superhumans.

Hating all superhumans, he did not mind that the most lucrative bounties by far were those offered by unethical organisations for terminating super-heroes. Still, he knew that he needed to work in secret, which he rationalised as protecting his technology from industrial espionage.

Basing his work on his dad’s technology, Bloom developed the Tracer concept and recruited a top scientific and engineering crew. He also built a secret lab for them all to work in in secret. When everything was ready, in 1992, he went through extensive, painful surgery to become Tracer.

Meanwhile, his team developed a flotilla of quasi-invisible drones to spy on superhuman fights and acquire data.

The technical team was named the “Tailor Group”. Since their job was to come up with tailored solutions to take down specific superhumans.

Potential targets included Spider-Man, Namor, the Hulk, Wonder Man, Titania, the Wizard, etc.. But the rewards on the villains were just too low, and most of the heroes posed technical hurdles.

Needing a lot of cash ASAP to recoup costs, Bloom focused on Deathlok (Michael Collins). The Cybertek company had made the cyborg’s specifications available to design counter-measures – and was offering 20 millions POD.

With all the available information from Cybertek, the Tailor Group developed specific weapons. These would allow Tracer to take down the powerful Deathlok. However, when Bloom tried to take control of Deathlok to walk him back to his ship for delivery, he accidentally made contact with Collins’s memories. Bloom thus realised that he had been deceived.

Deathlok wasn’t, as he had been told, a robot. He was a man converted into a cyborg soldier against his will. Horrified by what Cybertek had done to Collins, Bloom took Collins to a hospital in an attempt to make amends for his attack. He then left and let go of the lucrative Cybertek contract.

Some among his team tried to talk him out of continuing the Tracer project. But the obsessive Bloom doubled down and focused his simulation runs on Spider-Man.

Does whatever a spider can

A few months later, this paid off as one Detective Martin (ret.), actually the Chameleon in disguise, hired the Tailor Group to take Spider-Man out. Tracer engaged Spidey and was almost successful. But as Parker was about to pass out, he suddenly rallied by thinking about his wife and beat Tracer up.

Spider-Man then explained to Tracer that he had been tricked by the Chameleon, which a quick search confirmed.

Tracer hasn’t been seen since. But his absence after the Stamford catastrophe that sparked a Civil War among American superhumans was ominous.

The Tailor Group did not seem to be sustainable long-term, mostly due to Bloom’s neuroses.

Whether Tracer remained active past the mid-1990s is unclear. It is possible that the prosperity of the 1990s allowed Bloom Industries to recover and pay off the bulk of its debts so it could continue to operate. This would have made Tracer’s activities more sustainable as he no longer needed to turn a strong profit ASAP.

Richard Bloom is not psychologically sick per se, but he has issues.

He apparently grew up in the shadow of his brilliant and charismatic father, and lacks the greater-than-life quality that he had. Bloom overcompensates for his failure by acting like a stereotypical hard-nosed, powerful young CEO of the 1990s computer industry. But most people seem aware that this is an act and that his credibility isn’t that good.

Rick Bloom knit a tangled ball of resentment around the death of his father. He’s certain that *somebody* is responsible. Despite a complete lack of proof or even a genuine clue, he thinks that it was some sort of conspiracy, and that powerful superhumans are responsible.

This seems to be a textbook pop psychology transfer. With Richard transferring his feelings of jealousy toward his father toward a mysterious, undefined enemy that embodies his own darker impulses and which he obsessively wants to destroy.

Bloom is in complete denial about it. He will stick to this story and his goals no matter how clear it becomes that it’s not really making sense. All superhumans are bad people and must be punished, because daddy died and now Rick is in deep trouble keeping the company afloat.

Though it doesn’t make sense outside of the context of Bloom’s neuroses, he has made sure that the Tailor Group would be an echo chamber. He recruited people who also hated and resented superhumans for their own reason.

One researcher did challenge the Group’s culture. He pointed out that selling the patents to the technology would be far more profitable. But Bloom rejects this in the name of his ill-defined revenge.

Richard apparently goes out of his way to reject some Jewish practices such as eating kosher. This might be tied to his father issues.

Tracer acts as a bounty hunter and essentially an assassin for hire. If he captures a target alive, there’s little doubt that the person will be tortured and/or executed. Yet Bloom is not a killer. Even with all the denial he can muster there’s a point where he will realise he’s doing something bad and forego the contract.

This creates an obvious problem in his line of work. To an objective observer it is unclear how the work of the Tailor Group can be successful in the long or even the medium run given the blatant contradictions in Bloom’s mind and plans.

Bonuses and Limitations:
Thief is Contingent upon Flight – Tracer’s flight is completely silent and he knows how to leverage that for stealth and ambushes.

Tools of the trade – Spider-Man

When configured to take on Spider-Man, Tracer used his Power Reserve to enhance his Weaponry (Firearms) score to 11 and his Enhanced Initiative to 08.

Tools of the trade – Deathlok

Deathlok was something of a special case – since the Tailor Group had extensive inside information about him, rather than have to rely on data gathered by drones. This allowed for up to 12 RAPs on the Weakness Detection Power, giving Tracer a huge edge.

The mission-specific weaponry was :

Tracer has but few appearances, so a lot of the stats are speculative. 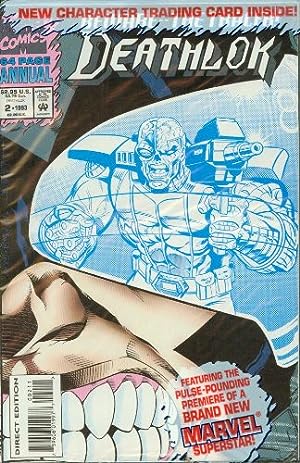 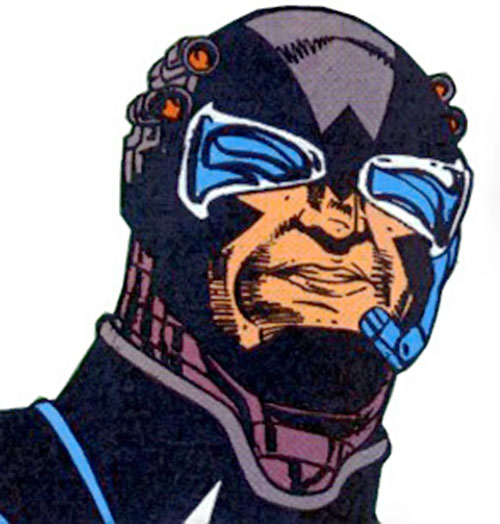 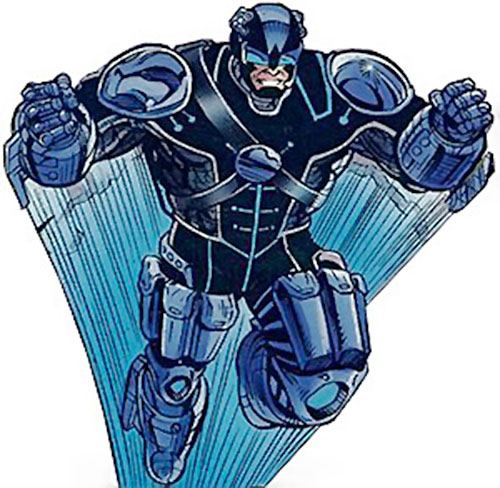 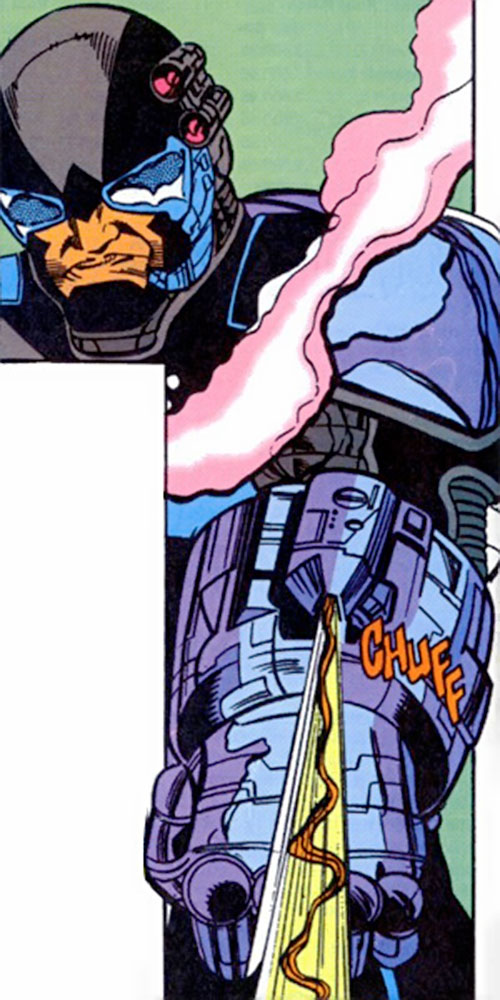 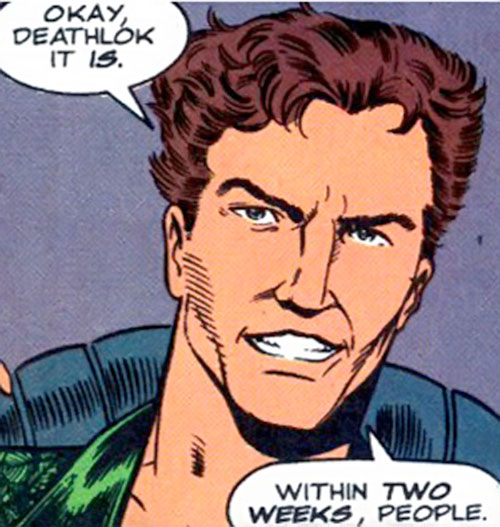