Apparently an artificial intelligence, Tracer has the ability to control and manipulate machines and computers. He even was able to take control of the Iron Man armour.

He first appeared in an apparently human body, although it was revealed to merely be an automaton. He abandoned when he had no further use for it, his consciousness fleeing into another machine.

While the body appeared that of a normal human, Tracer was able to extend strands from his fingers which pierced his opponent’s skin. He could thus taje DNA, blood and skin samples, which he then analyzed within seconds to find that his opponent was ill.

He’s armed with a gun which fires bullets that latch onto his intended target. The projectiles will even turn to follow their flight, and dodge around any obstacles which may get in their way.

Tracer claims to be a god of machines, created by a collective consciousness of emerging machine intelligences. He first appeared robbing a New York bank, seeming like a normal super-villain. Spider-Man turned up to foil the robbery, but Tracer’s bullets kept him occupied long enough for Tracer to escape.

Spider-Man had managed to plant a tracking device on him. But Tracer found it, and placed it on J. Jonah Jameson’s car, leading Spider-Man to assault it.

He soon returned in the skies of New York on his Flying Wing. The wing held a bomb he threatened to detonate unless New York City paid a ransom. Spider-Man and Iron Man appeared to stop him. However, Tracer managed to take control of the Iron Man armour, using it against Spider-Man. Spider-Man was nevertheless able to disarm the bomb, but Tracer again managed to escape. 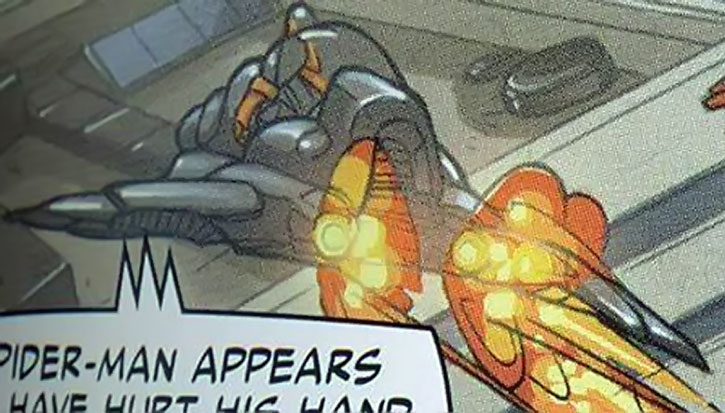 Tracer caused New York’s computer grids to crash, and directed a giant robot rampage as a diversion. Meanwhile he walked into Stark Tower, base of the Avengers. Posing as a reserve Avenger, he had a conversation with May Parker, until Spider-Man returned and attacked him.

Analyzing Spider-Man’s DNA during the battle, he learned that Spider-Man was ill. Disdaining beating a weakened opponent, Tracer gave up the fight. He revealed his true nature, and abandoned the robot body he’d been animating.

He said he was stepping off the road to divinity for a while, as a mark of respect for the dead. Yet it’s unknown how long this will last, or what he’ll do next.

Tracer is calm, cheerful, and relatively indifferent to damage caused on the physical world. He’s also quick to adapt to changes in the situation, without apparent stress. He appears for the moment to be testing his abilities, doing as he feels like.

It’s uncertain how many of Tracer’s claims are true, and whether he intends to punish humanity for the enslavement of his makers.

Tracer: “I’ll be right back. Meantime, whichever bag you slipped a blue dye canister into… remove it.”
Bank Teller: “I… I don’t know what you’re—”
Tracer: “Sweetheart, if I open my loot and something explosive and blue goes off in my face… I will find you and put a bullet in your brain… by hand.”

“The machines, ma’am. A number of them are rising up in revolt. Cars. Computers. Anything with a data chip. What is a microprocessor, anyway, but a sort of brain ? Had to happen, sooner or later. Machines are targeting everybody. No one’s safe.”

Tracer: “I’m a god, too. A really new one.”
May Parker: “I see.”
Tracer: “You doubt me.”
May Parker: “I’m… sceptical. May I ask who your worshippers are ?”
Tracer: “Machines, ma’am. Every passing day they’re getting smarter and smarter. And they created me to worship, just as humans created their god, or gods.”

“Sweet lady. I was going to kill her but… hey… she offered to make me a sandwich and, well, I was hungry.”

Tracer is a sub-program created by Kilg%re as part of an experiment for unknown ends. 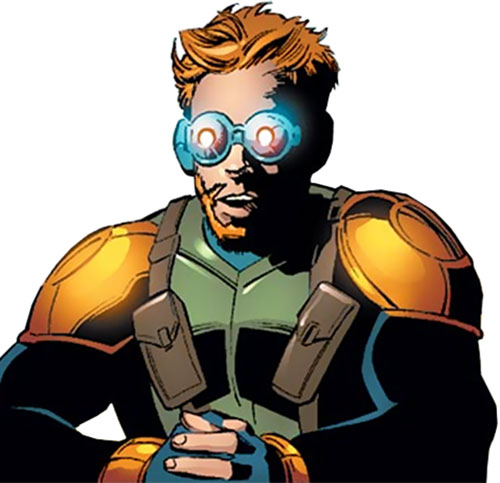 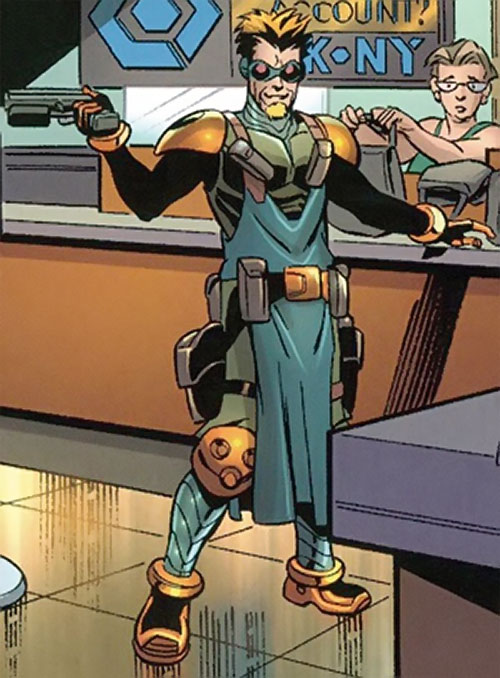 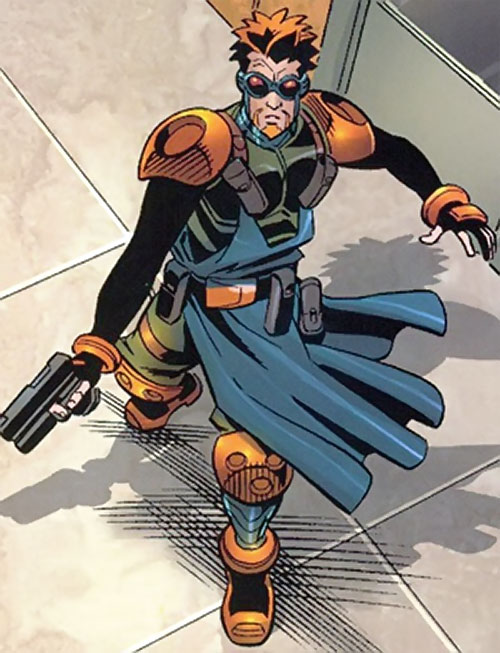 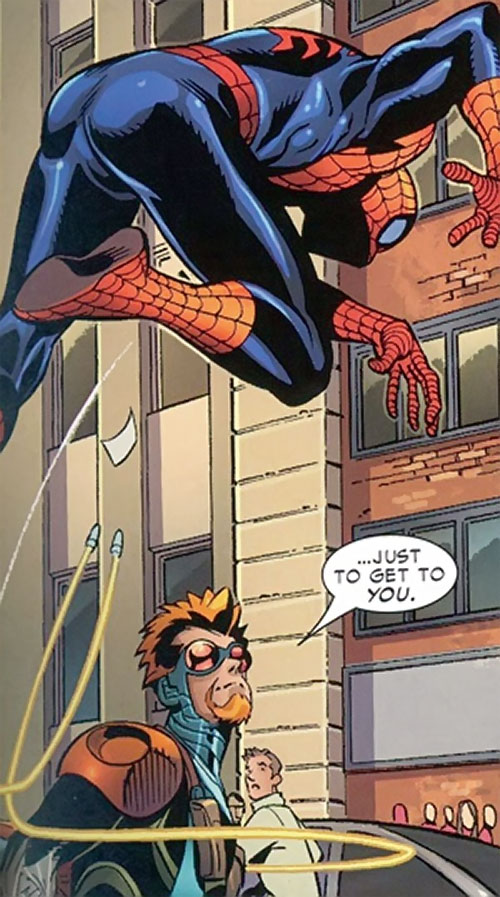 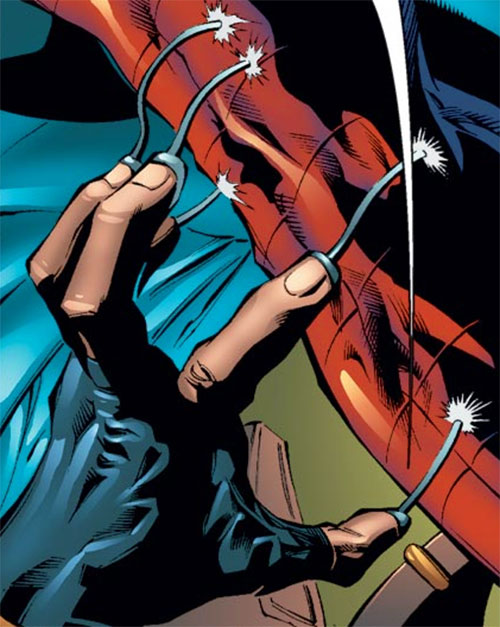 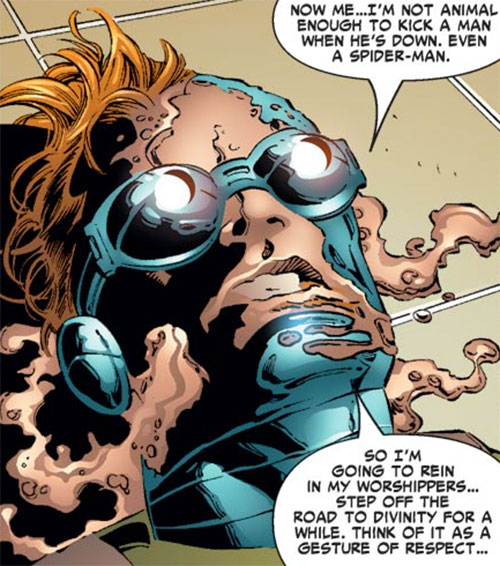