What happens when the never-ending battle for truth and justice ends?

Halcyon is a deconstructionist 2010 Image Comics super-hero series. It is set in an original war where crime and violent conflict all but vanish within months, making heroes largely pointless.

Transom becomes the only hero to still be useful in a world where supers have become irrelevant. Only he us able to arrive at the scene of a disaster or accident in time to save lives.

Transom is a super speedster . He’s able to cross the world and save victims of disasters in seconds all the while catching his favorite TV show in ten millisecond intervals.

Transom is stronger than average, but not necessarily super strong. He is seen carrying two average sized adults away from a train crash at super speed.

Transom healed from 19 breaks and fractures in a matter of minutes due to his hyper-metabolism. He also did not stop to rest or sleep for a full month.

Transom, the world’s fastest hero, became the only game in town when a “Global Humanitarian Phenomenon” occurred. All violent crime, even violent impulses in humans, ceased, effectively creating world peace.

The other heroes, not fast enough to respond to accidents and natural disasters found themselves without purpose. But Transom continued to save lives. Train derailments, earthquakes, towering infernos, and nuclear meltdowns — Transom was the only one who could reach them in time.

It was during a tsunami one month after the “GHP” that exhaustion final took its toll on Transom. His power failed. Crashing into the water wall of the tsunami, he suffered multiple breaks. Calling for his teammate Zenith, she pulled him out of the water, and began to help the victims of the tsunami.

Later, while recovering and rehabbing at Halcyon’s underwater headquarters, Transom confronts Sabre. Sabre has come to do research on the “GHP”. Transom questions Sabre’s motivations, saying the only reason he is trying to solve what is causing the “GHP” is because he (Sabre) feels as purposeless as the others.

Zenith and Sabre discover that their arch-enemy Oculus is behind the “GHP”. Sabre vows to destroy the mechanism, while Zenith and the others vow to defend it. Transom gathers with the heroes (and some villains) to defend Oculus’s lair. This is where the mechanism that is causing the “GHP” is stored.

Transom and Enos enter and stand guard at the mechanism itself, while Zenith and the others stay outside to defend the perimeter. 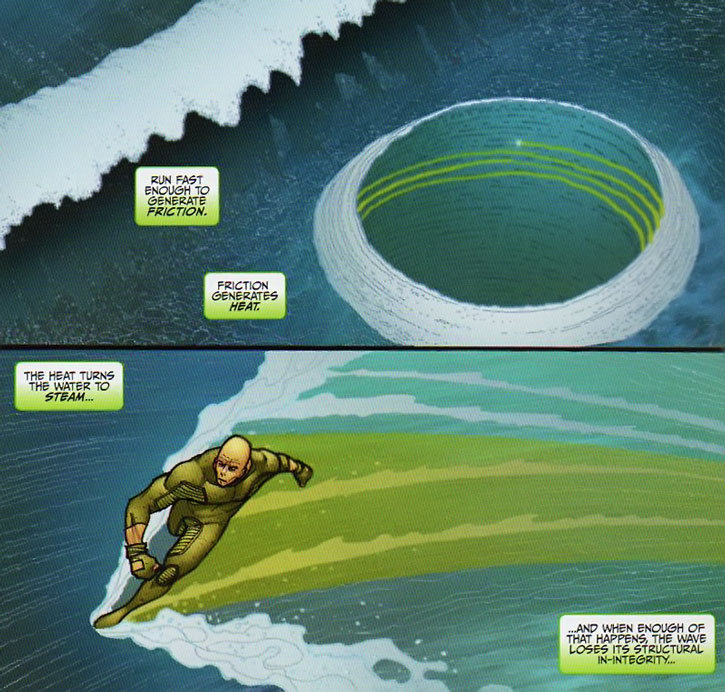 Sabre arrives. However he has not come alone and has gathered heroes and villains together who want to see the mechanism destroyed and return the world to its “natural” state. Both groups discover that close proximity to the machine negates the “GHP” and they are able to fight once more.

Sabre sneaks past the outside defenders and finds Transom and Enos waiting for him. Sabre has a power nullifier and presses the button, but Transom moves faster than the nerve impulses in Sabre’s hand. He is thus able to grab Sabre and runs with him, wind shear tearing away at Sabre’s uniform.

But then the power nullifier activates, and Transom is unprepared for the loss of his power. Propelled forward by his own momentum but without his power to control it, he slams into a far wall, leaving a crater and not much else. Whether or not Transom survived his collision (highly unlikely) remains to be seen.

Transom is a bald, White male who wears a hunter-green uniform, and racing gloves. He does have a cowl, but rarely (if ever) wears it.

His costume sports “high-friction” joints where is arms and legs are.

A bit of a T.V. junkie, Transom is easy going, almost casual, even when saving lives. Despite being driven when he becomes the “only hero still left”, when he is forced to rehab after sustaining injuries, he does not lament about the lives being lost while he is at rest. Still, he takes his responsibilities very seriously.

“I can break the sound barrier just by walking.”

“Floods and fires, collisions and collapses… all the stuff no hero on Earth — even Zenith — can possibly get to in time. No hero except one, that is.”

“Just one more crisis… One more, and I’ll take a rest.”

Zenith: “What are you doing ?”
Transom: “Bullet train derailment in Japan, earthquake clean-up in Peru, towering inferno in London. Plus, the Top Chef finale’s on and I’m catching it in ten millisecond intervals.”

Regeneration: After rescuing Transom from the tsunami, Zenith says it will take ten minutes for his hyper-metabolism to heal him from 19 fractures.

No need to sleep: He apparently goes non-stop for 1 full month without rest or sleep. Although we don’t see him stop to eat either, it is plausible that he was eating on the run.

Public ID: Transom has no hair on his face, yet does not appear wind burned either. He often forgets to wear his face mask while moving at super-speeds and burned all the hair off his head. Transom has stopped in public long enough to be seen and photographed. 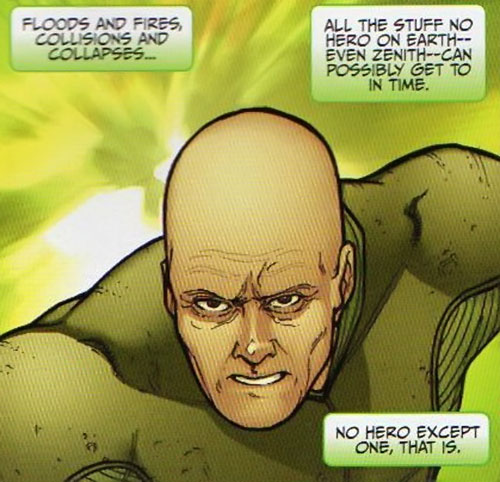