Evil and armed for combat !

Trapjaw appeared in the 1983-1984 cartoon series He-man and the Masters of the Universe. He’s an evil warrior working for Skeletor.

If you aren’t familiar with this universe, read our Masters of the Universe setting primer.

Trapjaw was active in a couple of She-Ra episodes as well.

Trapjaw is a cyborg. He has a mechanical right arm that houses many attachments. These provide him with both melee and ranged weapons.

Often forgotten by enemies in battle is his impressive steel jaw. With it, Trapjaw can effortlessly bite through almost any material on Eternia.

He can design and build powerful sci-fi-level weapons and machinery.

Trapjaw is a magical creature! He actually chews up and eats the metal and stone he bites through. How his body can hold and process that much metal is unknown. Chalk it up to cartoon physics and his magical make-up. Trapjaw can subsist on things eaten as if it were normal food.

Later in the series, he showed skill with disguises and espionage. He even fooled a suspicious Prince Adam. 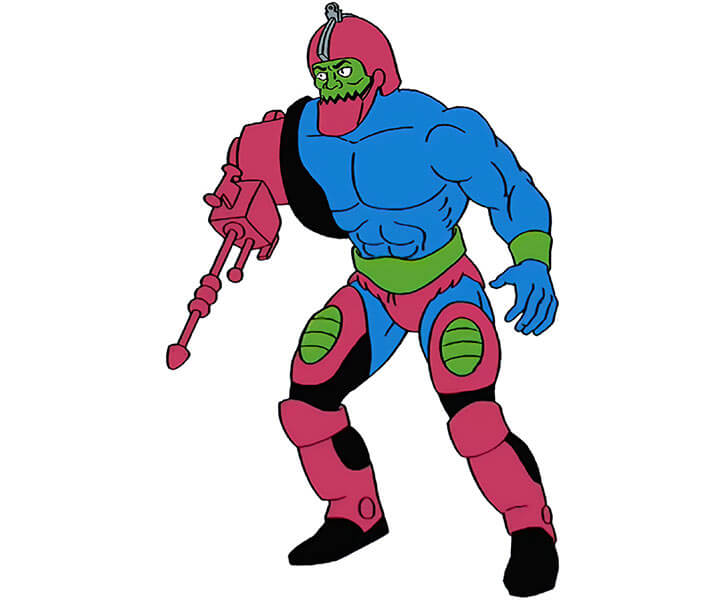 Trapjaw was one of Skeletor’s first warriors gathered from Eternia. Teleported to Snake Mountain, he joined Evil-Lyn, Beast-Man, Mer-Man, and Tri-Klops.

He aided Skeletor in his attempts at conquering Castle Grayskull and the forces of good.

Build me an army worthy of Snake Mountain

Trapjaw worked with Beast-Man to build a robot army for Skeletor (“Like Father like daughter” episode). Still, the Sorceress sensed the threat. She sent He-man to nip it in the bud.

Later on, He-man and Man-At-Arms needed Eternium to renew the Royal Palace’ energy source. Trapjaw and Mer-Man intercepted them and took the Eternium for themselves. Trapjaw ate some of it, and for a short time, was as powerful as He-man.

When his boost subsided, He-man captured him and sent him to the Prison Mines. 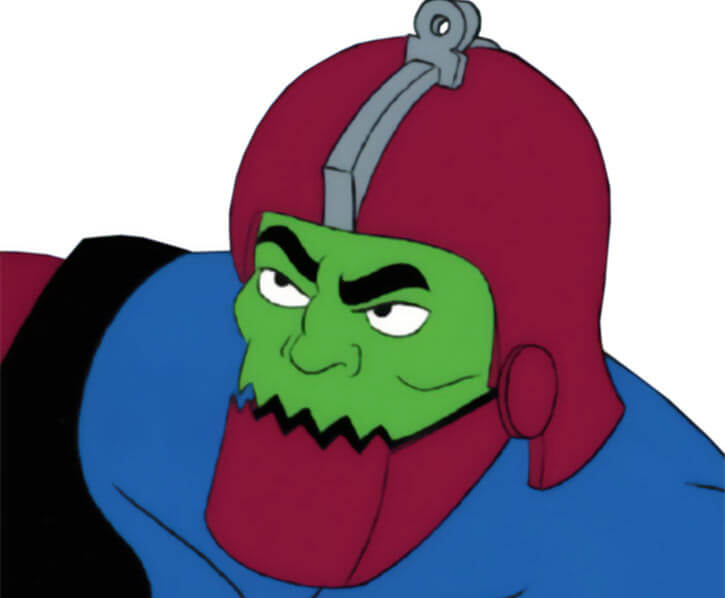 Keeper of the ancient ruins

Man-At-Arms and Professor Smallen, with the University, researched ruins together. Ancient robot guardians attacked them. Teela, Adam, and Cringer took a windraider to help. But an unexpected storm forced them down.

Trapjaw, at Snake Mountain, saw the crash. He mapped where the windraider went down and traveled there.

Trapjaw was in rare form. He disarmed Teela and took her prisoner. He then took on He-Man, even firing a bank shot forcing He-man to dodge.

Trapjaw stood against He-man and Man-At-Arms but when Battle-Cat growled at him, he ran. Trapjaw was again sent to the Prison Mines.

Many times, Trapjaw gets left behind by Skeletor or Evil-Lyn. So, he’s spent his fair share of time in the Royal prisons.

Trapjaw is a muscular man with blue skin.

He has a robotic right arm and a metallic helm and jaw.

He snores when he sleeps.

Like the other villainous warriors, Trapjaw is a bully. He laughs at his opponents when he has the upper hand and acts the coward when losing.

Trapjaw is a mechanical genius able to build futuristic sci-fi robots and machines. But working with the likes of Skeletor has always left him feeling inadequate.

Trapjaw seems to follow the lead of whomever he’s paired with. Most often, that’s Beast-Man. One of the few warriors he counts as a peer.

For all his mechanical genius, Trapjaw is pretty dumb. He’s easily tricked, intimidated, and bluffed. 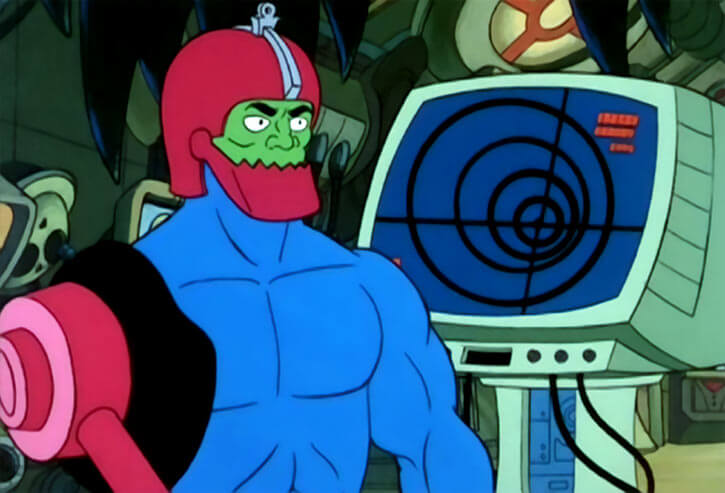 “If I could just get this Energy Bow on. These things never fit right.”

Trapjaw: “Now we’ll never get the Eternium.”
Mer-Man: “We were so close I could almost taste it !”
Trapjaw: “Taste it ?  Hmm, I wonder. Eternium is the most powerful substance on the planet.”
Mer-Man: “So ?”
Trapjaw: “Suppose I ate some of it.”
Mer-man: “Why would you do that ?”
Trapjaw: “Well, if I ate it, it might make me…”
Mer-Man: “It would make you as powerful as He-man !”
Trapjaw: “Right, then I’ll show He-man a thing or two. Haha. And the rest of Eternia too.”

“At last, one of my devices worked !”

“I have some tricks of my own.”

“Running won’t do you any good. Eternia’s ours now and there’s no place to hide !” 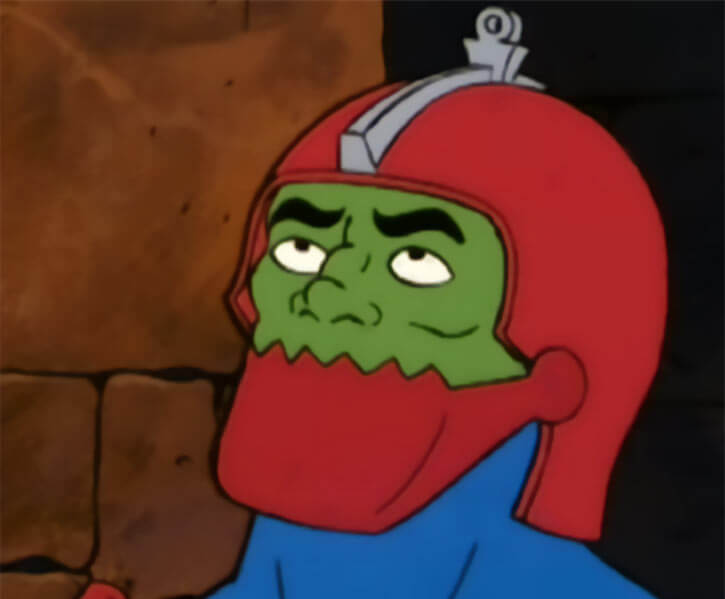 He could be seen as a tragic character, especially if we go with the idea that his conversion to a cyborg greatly diminished his intelligence.

These are covered by his Omni-Gadget attachment, but examples have included:

According to the line’s creator Roger Sweet, Trapjaw was inspired by the character Jaws from the film Moonraker. But many have speculated his design stemmed from the character of Iron Jaw from Mattel’s earlier toy line Big Jim.

Estimated an additional 20lbs (9 Kg.) to his weight for his metal parts.

Where does Trapjaw carry his attachments? It’s a question that goes unanswered by the series.

And yes, the Energy Bow was also only seen in one episode, but it was more memorable to me. So, it went in as one of his common attachments.

Source of Character: The 1983/1984 animated series He-Man and the Masters of the Universe and She-Ra Princess of Power episodes “Battle for Brightmoon” and “Assault on the Hive”. Voiced by Lou Scheimer.