Triad has the ability to split her body into three, each with a different, distinct, personality.

She is also a highly skilled martial artist.

The inhabitants of the planet Cargg have the ability to split themselves into three separate people. That is to say, they can use three different bodies. Should those three bodies display different personalities, the Carggite public considers this a sign of trouble. And such was the situation of Luornu Durgo.

The fate of such aberrations is usually a psychiatric hospital. Luornu might have been sent to one in early childhood if not for the intervention of her grandmother Murlu. Murlu was very similar, but who knew to be discreet about it.

After the departure of Luornu’s father and the death of her mother, Murlu became Luornu’s guardian. She encouraged her granddaughter’s personality differences. Murlu explained to Luornu that this was the way all Carggites should actually be, but that sometime in Cargg’s past, the message was lost.

Once her grandmother died, though, Luornu was in fact sent to a mental hospital. She spent several months in complete misery. Her three seldom-agreeing personalities…one shy and reserved, one outgoing and flirtatious, and one headstrong and clear-headed…agreed on the need to escape.

They slipped away from the grounds of the hospital and into the only available shelter, an open spaceship. Fortunately for Luornu, this spaceship belonged to United Planets founding father R.J. Brande.

Brande gave her a job and a healthy environment. He also pulled some strings to have himself legally named her guardian. Even when her past became revealed to him, his protective feelings for her didn’t diminish in the least…in fact, they increased.

Eventually, she became his most valued assistant. She was the one who he had contact the three founding members of the soon-to-be Legion of Super-Heroes.

Shortly thereafter, she saved the life of Brande and the President of the United Planets during the White Triangle’s attempted bombing of the UP headquarters building. From there she joined the group as its Carggite representative, Triad.

Triad has always regarded herself as one of the weakest Legionnaires. She becomes very defensive when she feels this fact is being referred to. Such was the case when one of her angrily walked out of a meeting in which a mission not including her was being planned…and right into a racist White Triangle ambush.

She was beaten very badly. Only the scientific genius of Brainiac 5 saved her, as he discovered that the one thing that got her shunned on Cargg was probably the thing that kept her from dying.

Upon her return to active duty, Triad found a new niche as a member of the Legion Espionage Squad. Since the Legion freed Valor from the Stasis Zone, at least one of her has been waiting on him hand and foot, as Carggite religion holds Valor in great reverence.

After he went on “detached duty”, Triad’s personalities became more conflicted than ever, a problem that causes her pain. The Legion’s meeting with the Emerald Eye of Ekron showed her just how badly some of her desire independence of the others. That was temporarily granted by the Eye, but they reverted to normal after the Eye’s retreat.

The Legion was trapped in the time-stream during an attempt to rescue seven members of the team from the 20th century. As the rescue attempt failed, Luornu found herself stuck in the twentieth century with them.

Her costume follows the same pattern.

Triad’s three personality’s are very distinct. Purple is outgoing, brash and open with her attractions. Orange is quiet, shy and a little religious. Neutral is a balance of the two, and often acts as the mediator between the two.

The Mystical Attributes and Initiative in the middle are Triad’s integrated stats. 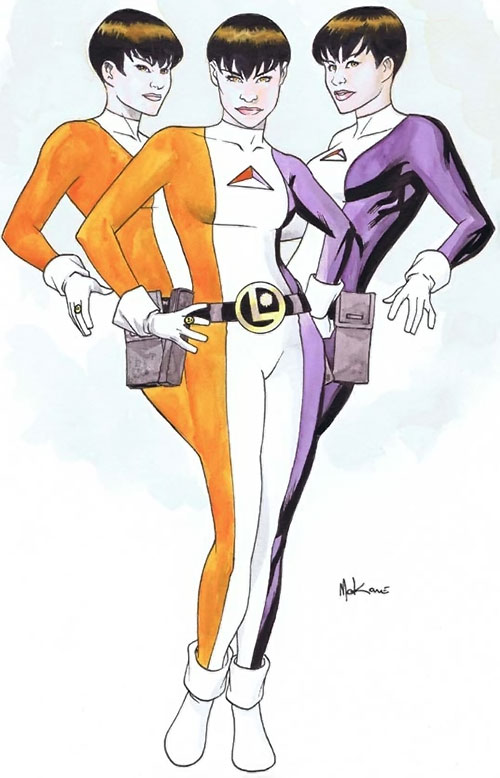