This obscure enemy of Marvel’s Adam Warlock first appeared in a 1973 storyline.

If you’re not familiar with Wundagore and the New Men, it may be better to first parse the High Evolutionary character profile for context.

Triax the Terrible is a New Man. Meaning an upliftedTurning an animal into a sapient, more human-like life form animal given human-level intelligence, the power of speech and a humanoid form.

It is possible that he has some animalistic abilities (such as a keen sense of smell). But that was never demonstrated.

In his natural form Triax is :

Though he’s descended from an animal that can be a powerful fighter, Triax is not a hardened combatant. He’s more like a Saturday brawler. He : 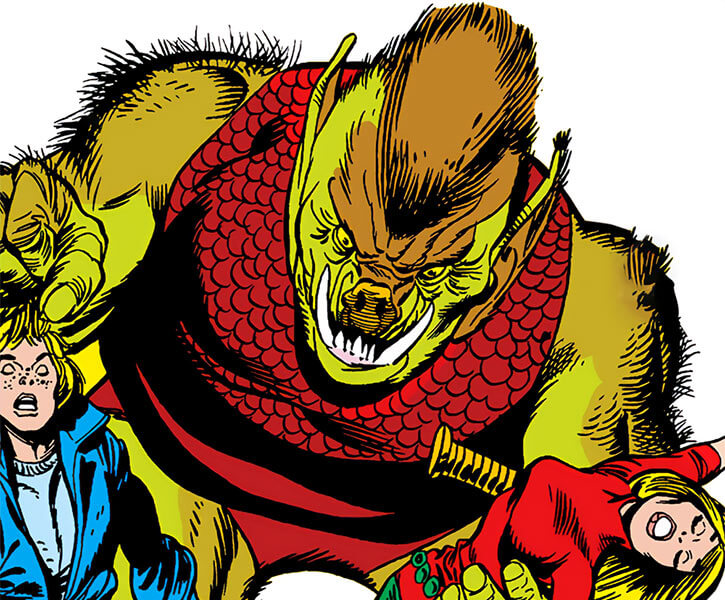 His main asset used to be a super-submarine, described in the game stats section.

Triax can somehow take the form of a quasi-human person of more average stature. In this form he calls himself Apollo.

This form requires concentration to maintain, though. In stressful situations — such as combat — he’ll likely be unable to assume it.

Triax later demonstrated the ability to look completely human (as “Ralph Shaw”). The limits of this shape-changing power are unrevealed.

As Shaw, he could also hide the fact that he was wearing power armourStrength-enhancing body armour, like Iron Man’s. He seemed to only wear a business suit. 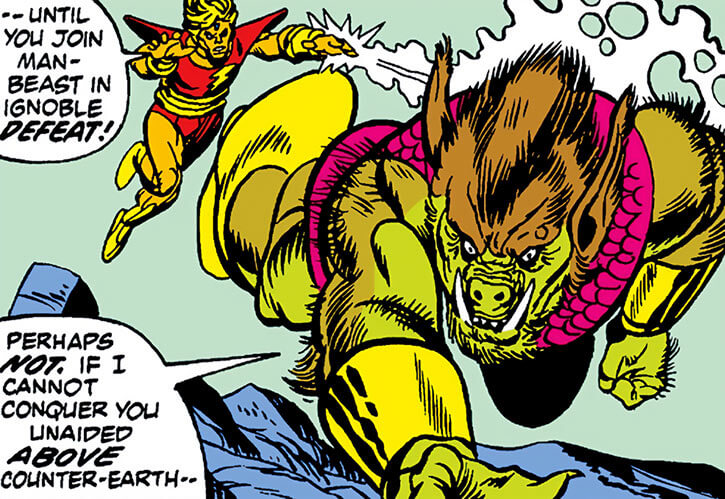 Triax is a super-evolved warthog  . He’s an animal uplifted to sapienceCapable of intelligent reasoning and humanoid form using a process designed by the High Evolutionary.

Such beings are called New Men.

It is unclear to which generation of New Men Triax belongs to. The two possibilities are :

Therefore, C is the likeliest possibility.

People try to put us d-down

Our suggested No-Prize HypothesisA made-up explanation to plug a plot hole is that Triax is an Isotope C Man-Beast servant.

If Triax is indeed an Isotope C New Man, the first few hours of his life were being uplifted by the Man-Beast then fighting the High Evolutionary and his forces in Wundagore.

The Man-Beast and his servants were defeated, and the Knights of Wundagore boxed them into a spaceship. The ship was then sent toward the uninhabited Dromisana galaxy.

However, the Man-Beast and his servants were not interested in being settlers. What they wanted was… REVENGE !

They watched the High Evolutionary create a new world, Counter-Earth, and then they struck.

Man-Beast managed to infiltrate Counter-Earth. He became the serpent in the High Evolutionary’s Eden. He brought henchmen with him, including Triax the Terrible.

However, the cosmic hero Adam Warlock embarked on a messianic journey to save and redeem Counter-Earth. He defeated Man-Beast.

By that point, Triax the Terrible still commanded a super-submarine and a crew of Man-Beast servants. He therefore decided to make his own attempt at conquering Counter-Earth.

Being one of the very few superhumans on Counter-Earth, he assumed that it was just a matter of creating enough shock and awe to cow humans into submission. 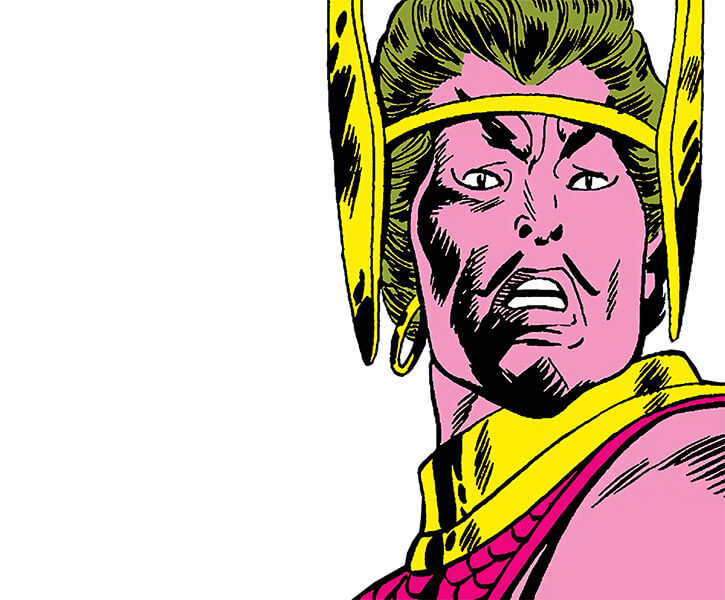 Triax attacked Cape Canaveral  . As a demonstration of power, his flying submarine destroyed a rocket as it was launched.

Though Triax killed one of Warlock’s apostles, his self-confidence rapidly evaporated after he started fighting Adam Warlock one-on-one.

During the fight, Triax saw that Man-Beast was among the crowd, disguised as Presidential candidate Rex Carpenter. This destroyed what remained of Triax’s self-confidence, and he was soon defeated by Warlock. The New Man attempted to escape – and seemed to accidentally fall to his death.

Triax actually dragged himself away before the security forces could engage him.

Triax was reunited with the Man-Beast under unrevealed circumstances. He resumed working as his henchman.

In 1992, the Man-Beast launched a new plot against Adam Warlock – who had recently assembled his Infinity Watch team.

Triax captured Infinity Watch member Pip the Troll while the Man-Beast (calling himself “Omega” for secrecy) caught the rest.

While Warlock easily disposed of the robot defenders, Triax was wearing power armour and proved a much tougher opponent. Still, Adam Warlock knocked him out and went on to defeat Man-Beast.

A few years later, Man-Beast attempted to gain revenge by manipulating the United Nations. He also mind-controlled the Avengers into attacking Warlock and the Infinity Watch.

The plot failed. Warlock came to reveal the subterfuge in front of the UN, defeating Triax and the Man-Beast by himself after forcing them to shed their human disguises.

Triax has dreams of power and conquest. But he can’t walk the walk and remains, at best, a flunkie. In DC Heroes RPG terms, his Mental and Spiritual Attributes are far from the best – and it shows.

His morale tends to be all-or-nothing. Either he’s fighting ferociously and efficiently – or he gets nervous, hesitant and cowardly. Which way he’ll go at any given point is difficult to anticipate. Wild pigs can be unpredictable.

He seems afraid of Man- Beast. Therefore, Triax will fight to the bitter end if the Man-Beast can see him. Presumably to avoid his wrath. 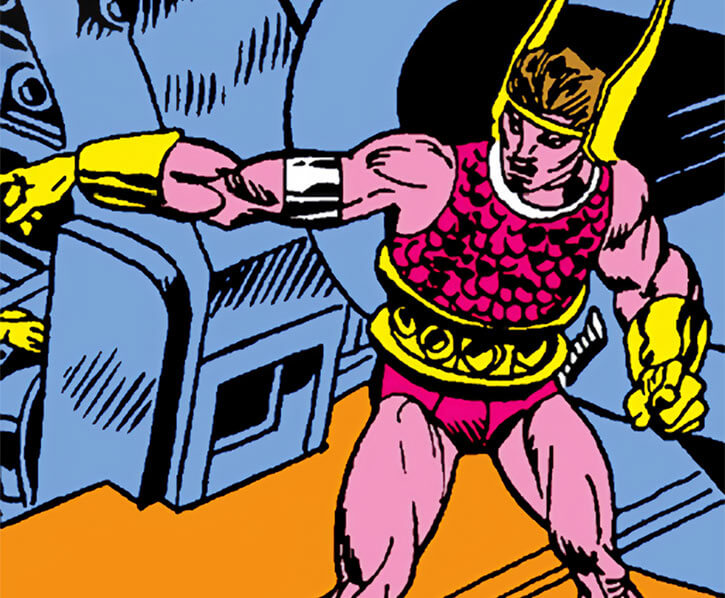 Insta-Change requires that Chameleon be active.

Strange Appearance (can be eliminated with Chameleon and no Growth).

A dark submarine… which bears a striking semblance to a killer shark !

Triax’s chief asset as Apollo was his super-submarine. It was a craft the size of an attack sub, with a crew of maybe a dozen sailors, numerous weapon systems, and flight capabilities.

This craft was presumably designed by the Man-Beast.

It had the following stats :

The SUBMARINE could launch two huge (about five metres long) heat-seeking missiles. It seemed to have but two, and they had to be launched in a pair that does a Team Attack. MISSILES [DEX 05 BODY 02, EV 15, Flight: 10, Grenade drawback]. 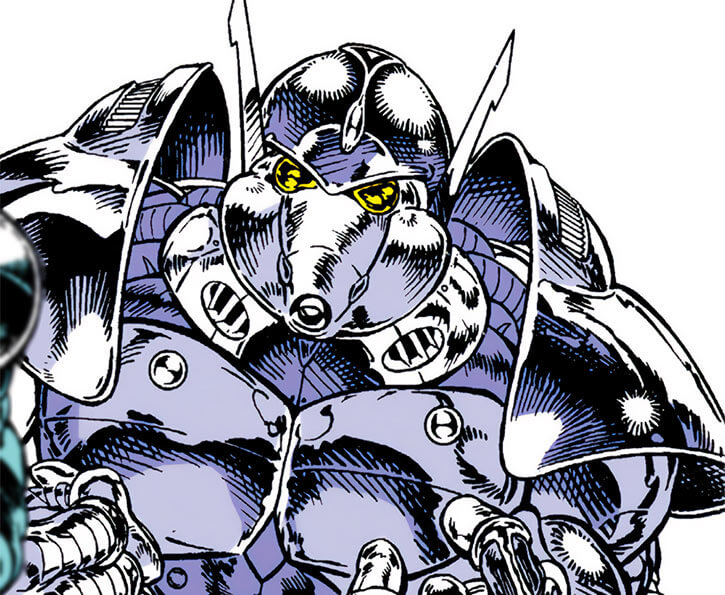 30 to 50 feral hogs ● 1 point ● Descriptor: Uplift
– Feature — Triax has three extra Ranks of size over the Human baseline. He *can* disengage these to be more discreet, but each disengaged Rank removes a Rank of Strength and Stamina.
– Protection 2 (Limited 1 to attacks that aren’t energy-based, though concussive energy doesn’t count). 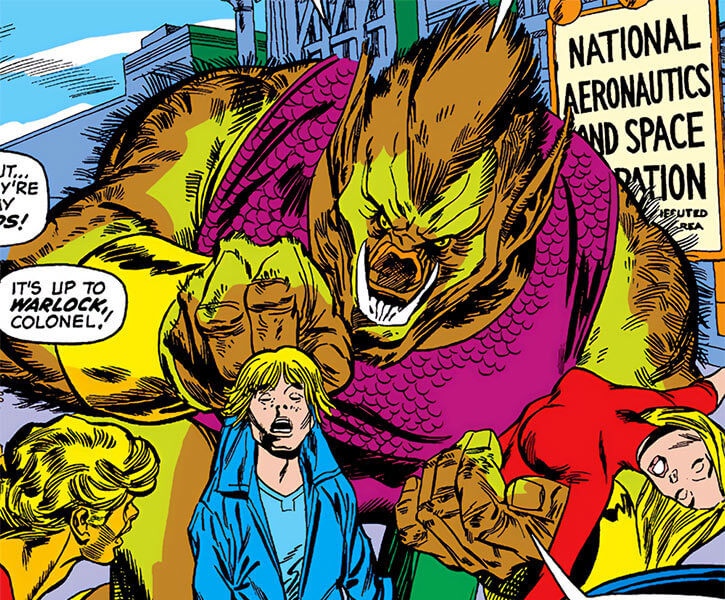 As you can see above, the PL computations do *not* include his Devices, which were adventure-specific. If he gets Man-Beast-issued gear, his PL components will rise accordingly.