He’s strong. And tough. I think.

He appeared in “Green Lantern vs Triclops Three-Eyed Keeper of the Cave” which appeared in Superfriends #26, amongst other places.

GL arrives in Triclops’ cave to stop his crime wave, when suddenly GL’s ring runs out of power (d’oh !). Triclops begins to wrestle with Hal, hoping to eat the superhero.

Fortunately, two young cave explorers (children, doncha know) appear and see that GL’s in trouble. They toss some Twinkies into the fray, and Triclops stops to eat the Twinkies, allowing GL to escape.

The children foolishly stay behind, however, to eat Twinkies too. So overpowering is their own CIA to Twinkies that they must stay in the same cave as a ravenous monster who will surely eat them as soon as he runs out of Twinkies…

He’s big and savage-looking. His skin and hair are a bright orange. He has three yellow eyes and two pointy fangs. He is either naked or wearing a fur skirt which is the same color as his hair and skin. He also has strange bumps all over his skin.

He has no compunction against eating people. 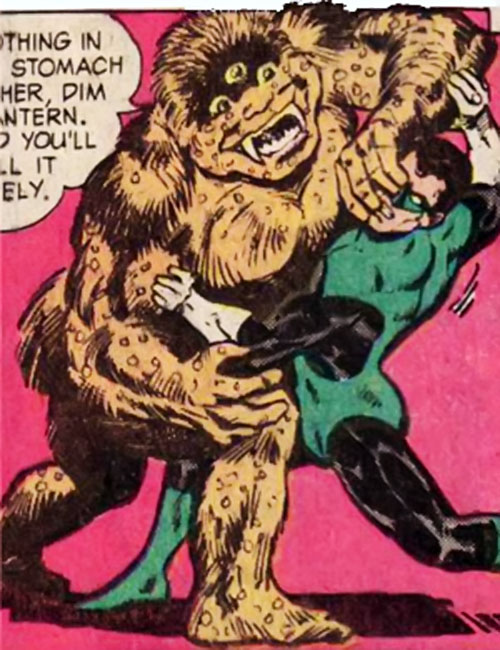