Trinity is an ancient Atlantean gynoid  of great sophistication and significant power. Her artificial nature is not readily apparent.

Trinity can morph her body to turn into something reminiscent of a techno-organic  lifeform in the Marvel Universe (in DC Heroes RPG terms, Fluid Form). She only does so when she doesn’t mind “breaking cover”. She normally appears to have a human body.

Most assume that her power rests in her three rotating faces. Those faces are presumably patterned after some ancient Atlantean myth, goddess, spirit or somesuch.

The yellow, tranquil face is the Face of Time. It can freeze whoever it is looking at, by making their movements and thoughts so slow as to be imperceptible (in DC Heroes RPG terms, Mystic Freeze). Remaining in this state is harmful as blood stops flowing, the heart stops beating, etc. (Cell Rot).

Occasionally, Trinity can drastically slow everything but her allies around her. This lasts just long enough for them to re-orientate, move out of the way of incoming attacks, ready their attacks, etc.. Presumably, outside observers perceive this as a brief, selective burst of superspeed around Trinity.

The red, angry face is the Face of War. It shoots potent eyebeams (Energy blast) with great accuracy.

The green, twisted face is the Face of Chaos. It overwrites perceptions with surreal, twisted, maddening visions of entropy. These will soon destroy the sanity of ordinary mortals (Sensory Block and Mind Blast).

Trinity is of ancient Atlantean manufacture. She is essentially a living virus designed to take over Atlantean computer systems. As can be surmised, she’s from an age of Atlantis that was technologically advanced.

Though that may not have been her original goal, Trinity seems to have been a sort of fail-safe, intended to return Atlantis to its days of glory were they to disappear.

A brotherhood of evil

However, her first appearance did not hint at any of that.

In 1990, she appeared as a new recruit of the Brotherhood of Evil. At that point the Brotherhood was Plasmus (Otto Von Furth), Houngan (Jean-Louis Droo) and Warp (Emile Lasalle). When these three engaged several Titans on the UN Plaza in New York City, Warp soon brought Trinity in as reinforcements.

Trinity started hammering on Troia. But the fight was interrupted by the arrival of a Tamaran spaceship and the Society retreated.

Why Trinity associated with the Brotherhood is unknown – perhaps she saw some potential in Warp’s power to allow her to execute on her mission.

An incorporation of villainy

In 2002, Trinity was part of Queen Clea’s new version of Villainy, Inc.. Queen Clea was from the very minor Atlantean outpost of Venturia. But Venturian computers presumably did not have the firepower Trinity needed to run her core programming and restore ancient Atlantis. Reputedly decadent and diminished, Venturia might even have had no working computers left. 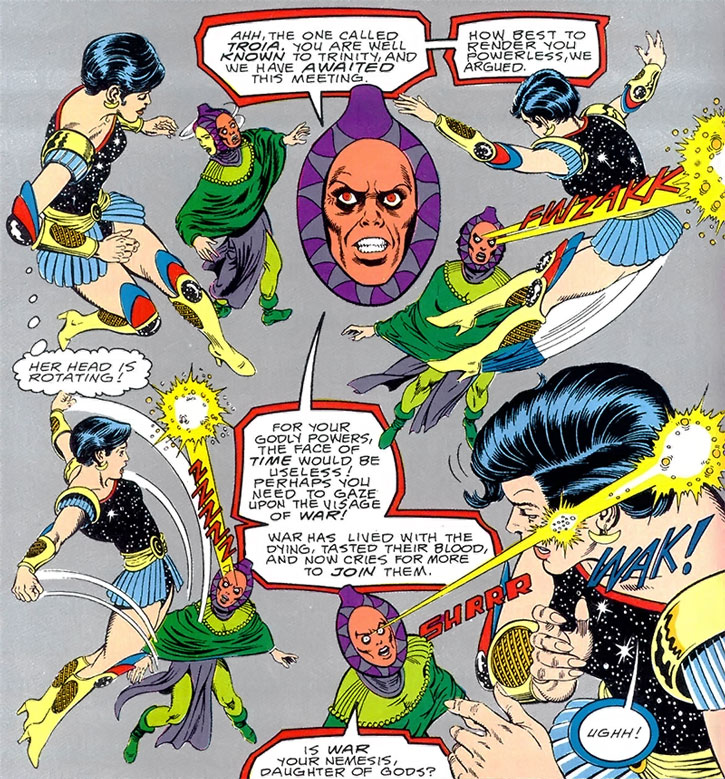 The modern, submerged version of Atlantis (the one with Aquaman (Arthur Curry)) had disappeared during the recent Imperiex War. But Queen Clea was on a quest to find and conquer it. She apparently assumed that Atlantis had been weakened enough by the Imperiex events for a small team of superhumans to conquer it.

Villainy Incorporated did not end up in Atlantis, but in Skartaris . This may have been caused by Trinity’s manipulations, since Skartaris had been the site of a major ancient Atlantean colony. They decided to conquer it anyway.

Trinity was an important asset. She directed the team toward the great city of Shamballah and the enormous banks of Atlantean computers she knew were below it. After Villainy, Inc. conquered Shamballah, their member Cyborgirl (LeTonya Charles) interfaced with the computers.

A virus in time

At that point, Trinity had everything she needed – access to a vast Atlantean computers network, and Cyborgirl to serve as an interface. Trinity revealed her nature as a virus, and had the computers system mentally overwhelm Cyborgirl. Now the Trinity virus could quickly spread to all sub-systems.

With their full power harnessed, the ancient Atlantean computers could manipulate time itself, though not in a delicate fashion.

The Trinity virus rolled back time itself in a haphazard but devastating way. The goal was to bring back the ancient times of the original Atlantean colony that came to Skartaris. The ham-fisted manipulation of time by the computers de-aged hundreds, and de-evolved thousands. It threw everything in disarray as the distant past chaotically popped back into the present.

After Doctor Poison II of Villainy, Inc. determined what was going on, Wonder Woman and Trevor Barnes intervened to help Cyborgirl and stop the virus. Wonder Woman destroyed the computer banks with the Trident of Poseidon, and Trinity was seemingly destroyed along with them.

She seemed to be generally quiet, disciplined and reserved. Trinity was as inscrutable as her usual face, that of Time. However she liked to elaborately comment on the effects and role of her faces when using them against new foes. These were typical comic book exposition lines.

Trinity appeared to be proud and happy to be able to finally accomplish her mission as a computer virus.

Drawbacks:
Distinct Appearance, Misc.: Switching to a different face is an Automatic Action, see the Powers & Abilities section for which Powers can be used by which face. 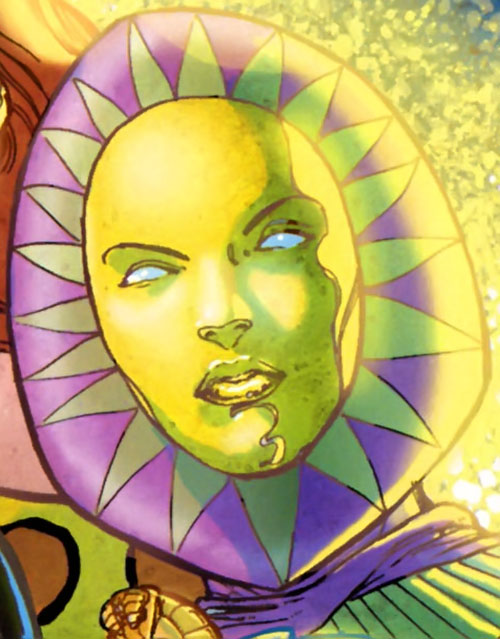 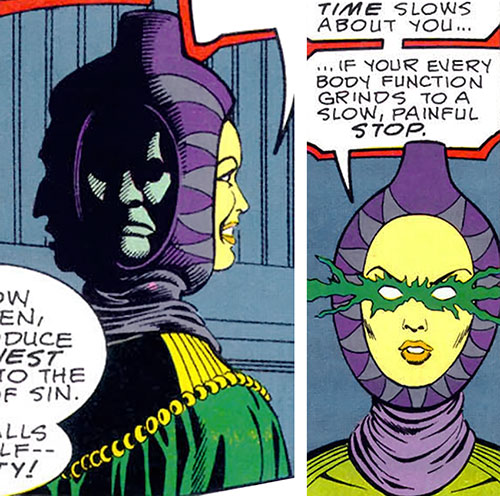 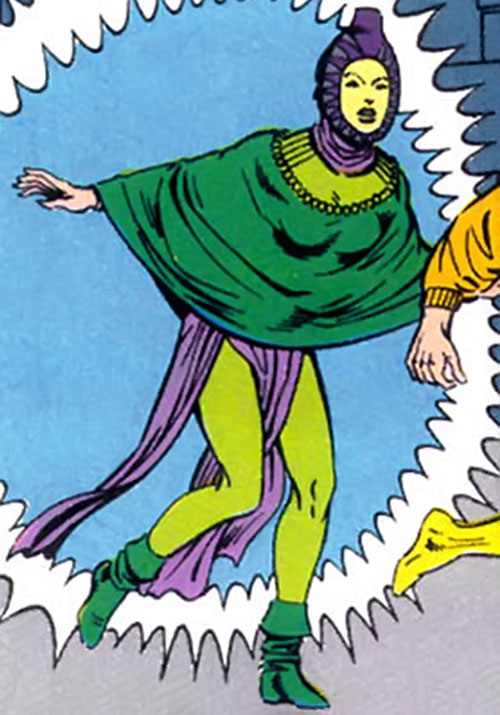 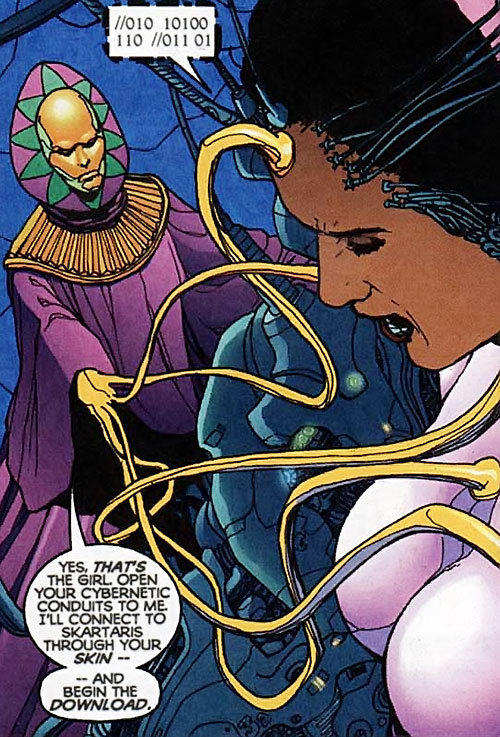 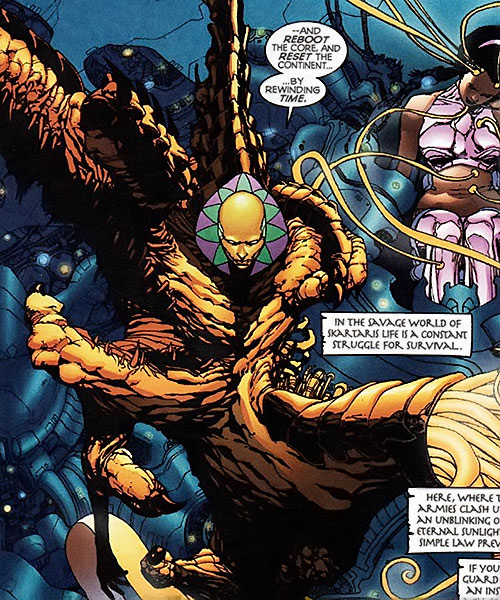