Triple-Iron is a towering man with superlative training in the martial arts. He uses his immense size and reach to his advantage. And is armed with a specialised melee weapon that extends said reach even further.

Beyond his innate assets and excellent training, Triple-Iron benefits from two edges.

Triple-Iron was likely born with a medical condition that made him a giant. From what can be pieced together, he was kidnapped as a teen and locked into a room. He was told that one day, a man would walk in. If he could defeat that man, then Triple-Iron would be free.

The captive spent ten years in this room. During that time he received special training and equipment. And in late 1974, the man he had been waiting for finally entered the room.

The whole crazed scheme had been set up by corrupt CEO Ward Meachum. Triple-Iron was the last of a long series of obstacles, traps and fighters placed by Meachum to stop Iron Fist (Daniel Rand-K’ai). Meachum had lived for years dreading Iron Fist’s return to Earth, correctly anticipating that he would be an incredible fighter yearning for revenge. 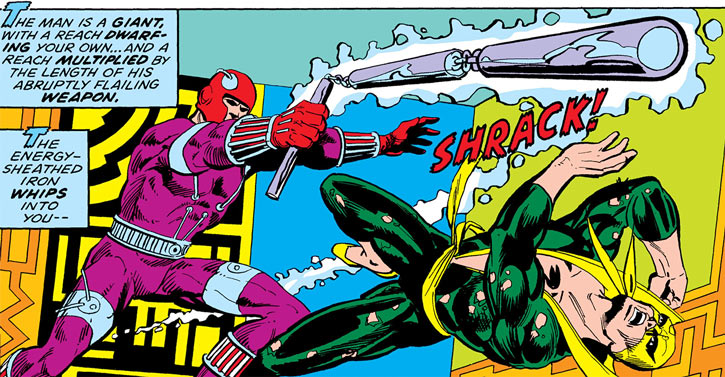 Worn thin by the previous challenges, Iron Fist might have been defeated by Triple-Iron. However, Rand-K’ai was covertly aided by the mysterious Ninja. The Ninja showed Iron Fist how to cut the power to the strange room holding Triple-Iron. Once deprived of his technological edges, Triple-Iron was knocked unconscious.

Minutes later, the Ninja assassinated Meachum. The still-unconscious Triple-Iron was free at last.

Keep on keeping on

Years later, a man widely thought to be Triple-Iron was spotted at an AIM weapons expo on the island of Boca Caliente. He briefly and fruitlessly attempted to take down Captain America during a confused brawl.

Triple-Iron’s presence at a weapons expo likely indicates that he is making his trade as a mercenary.

Iron Fist noted his opponent seemed to have the mind of a child. This would make sense if he was kidnapped when he was a young teen and kept in the special room since.

Aside from his initial introduction (quoted below), which obviously had been rehearsed, he was simple, direct and angry, with no special subtlety. He didn’t seem to seriously consider that possibility that he could lose.

One can only speculate as to the mental state of somebody who had such a weird and confined existence, but it must not be pretty. Agoraphobia, demophobia, OCD and the like readily come to mind.

“Know this, Iron Fist — this costume I wear, and the very room in which we stand, combine to a greater end than merely granting me my power… they also bind me prisoner to a task, and only by completing that task will I be freed. The task, Iron Fist, is your murder — and believe me… I wish to be free !”

“You must understand, Iron Fist — I have waited nearly ten years to be free.”

“Ha ! You think that because Triple-Iron is large, he must be slow !”

Triple-Iron could be a League of Assassins member. An Ubu kept locked into a special room to defend something very important to Ra’s al Ghul. Batman would have eventually defeated him during a clash with Ra’s.

Alternatively, the design of the costume suggests Intergang. By augmenting the power provided by his costume and weapon, Triple-Iron could have been a foe for nearly any DC Universe character clashing with Intergang. Still, Intergang foe Superman might be pushing it.

Powered suit ● 4 points (Removable) ● Descriptor: Technology
– Boosted speed — Enhanced Fighting 4, Enhanced Dodge 4, Improved Initiative 2, Defensive Roll 1.
– Armoured — Protection 5.
– Will only work in that one room, must be built to measure (Limited 2 on everything).

* Without Defensive Roll.
** With Powered suit. 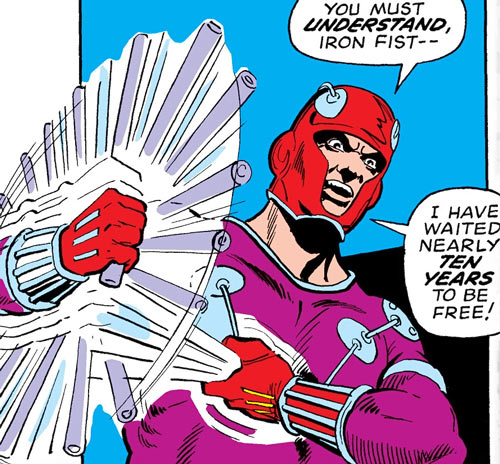 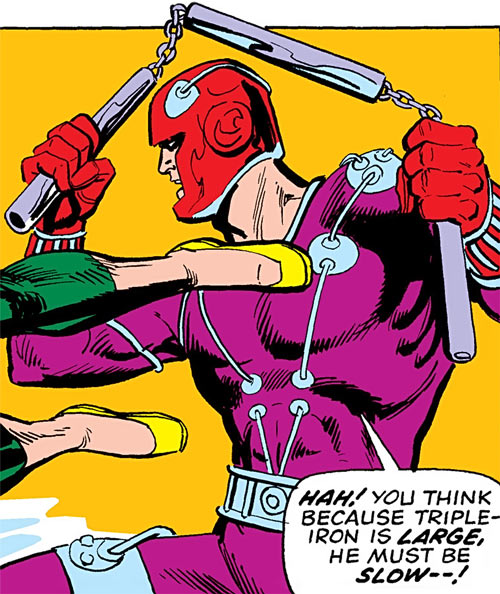