Troll is a minor Marvel Comics character, who appeared in 2010.

She’s a feral little girl from the dimension  of Asgard – the same place as Thor.

She regularly uses an enchanted Asgardian axe in combat, which sliced through Ragnarok’s fake Mjolnir.

She’s also a skilled tracker and hunter, and has an advanced sense of smell.

(More detail of her time with the Thunderbolts can be found in the team entry.)

Gunna’s mother was an Asgardian who was abducted by trolls. She had Gunna by one of them, and the child was raised in troll society believing herself to be one.

She and other trolls were prisoners in Asgard. When it fell during the siege, they managed to escape. Free on Midgard , the pack hunted and ate people in the wilderness until the Thunderbolts were dispatched to stop them. The other trolls were killed, but Gunna was taken prisoner when seen to be a child.

She was held at the Raft while her status was reviewed, where she developed a relationship with Songbird, whom she came to trust. Her crimes and legal status posed problems as to what to do with her, though Asgard wanted her back. When Thor offered her a place in Asgard she refused, claiming she wasn’t Asgardian. 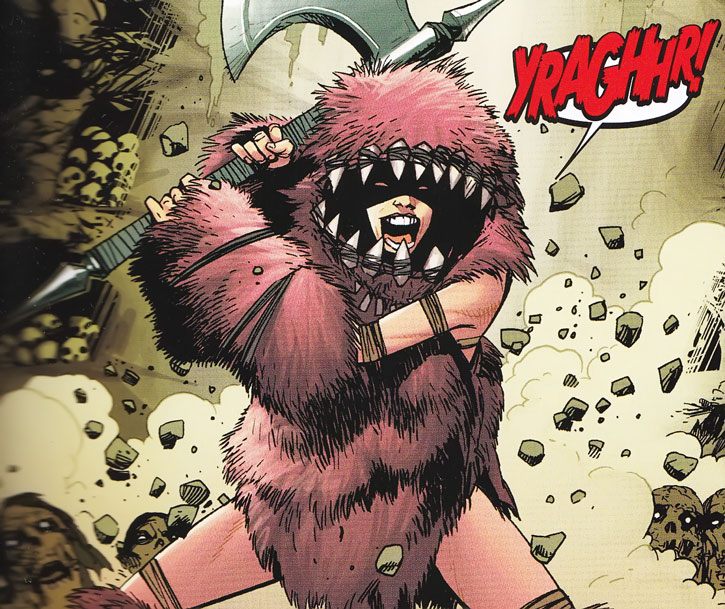 She was inducted into the back up Thunderbolts team, and was with them when they got stuck on a journey through time. Mister Hyde developed an uncharacteristic soft spot for her, amused by her savage antics.

During their escape from Camelot, Gunna dealt with Merlin’s guardian dragon by leaping on it and taming the beast. She wasn’t happy at being forced to leave her new pet behind when they fled the time. She was confused and hurt when they encountered an earlier Thunderbolts, and the younger Songbird attacked her.

When they returned to their own time Gunna was wary of Songbird, and intended fleeing with the criminal Thunderbolts. Hyde had other ideas, shoving her back into Songbird’s arms, telling Gunna she wasn’t a criminal like them.

Savage and fearless, Gunna is always ready to jump into a fight, although she seems to have become less bloodthirsty during her time around people. She’ll still jump into the fight without hesitation, but killing is no longer something she does so unthinkingly. She will, to save her friends, but she’s started feeling bad about doing so.

While fluent in the troll language, her English is broken, although she has moved on from primarily growling her feelings.

Troll (trying to fit in in Victorian London): “Bad smells Troll hate.”
Centurius: “That could be an actual sentence with a little restructuring, Gunna. ‘Troll hates bad smells.‘”
Troll: “Troll not brittle lady.”
Centurius: “That’s ‘British.‘ And you said you would try. You want to return home, don’t you ? Come now, what did we go over yesterday ?”
Troll: “The… rain… in Spain… stays mainly in… the plain.”