Trump is a talented stage performer, and illusionist. He uses his expertise at sleight of hand whenever he can, and eschews any kind of up front confrontation.

He uses a variety of tricks hidden throughout his costume. These include decks of cards, nylon ribbons, handcuffs, scarves, etc.

His cane is a tipped with a Taser™ on one end and shoots pellets out the other. He also uses conventional weaponry and is an expert marksman.

A “magician and kidshow host,” Sanders moonlighted as a criminal specializing in heists. His last job put him in Tulsa State Penitentiary where he was held for grand theft and murder.

Breaking out, he became the costumed Trump. This was a homage to his expertise as a card player (he was two time prison bridge champion).

Headquartered in a Moosehead Brewery warehouse in New York, he undertook gunrunning only to be stopped by Daredevil (Matt Murdock).

Years later he was seen at a local club, where he ran afoul of Bad Girls Inc., and later at an A.I.M. Weapons Expo looking to improve his arsenal.

Trump is a physical coward and something of a weasel. But he is cocksure in his abilities to see him through confrontations.

“I’ve always got a trump card up my sleeve.”

Are you kidding me ? A Batman villain for sure ! 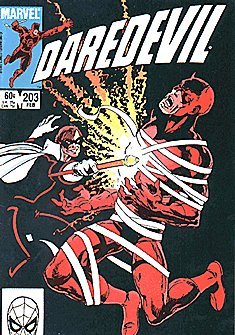