Tuk the cave boy is an early Marvel character, appearing in 1941. Well, proto-Marvel – it still was Timely Comics back then.

He was in the back of Captain America comics. And brought to us by all-time classic team Joe Simon and Jack Kirby.

It is a curious, very 1940s little thing that never went anywhere. But it’s cool in its own, dated way.

And in 2019, there was a out-of-the-left-field revelation about his historical importance.

He seems to be naturally good with animals handling, including mahoutingRiding and keeping an elephant.. He can fake a convincing sabretooth tiger mating call.

His likely father demonstrated peak human strength. So it is possible that as an adult Tuk will also possess immense strength. And perhaps other unusual qualities.

Tuk adventures with his mentor, Tanir. Tanir is a tall, powerful fighting man and archer. He is capable of defeating multiple opponents. Tanir is basically a less powerful Ka-Zar or Tarzan.

The five published episodes cover several years. Tuk is originally a boy, but by the fifth episode he seems to be 14 or 15. In early episodes he’s just an athletic kid and not a match for a determined adult. But in later episodes he’s becoming a capable fighter. 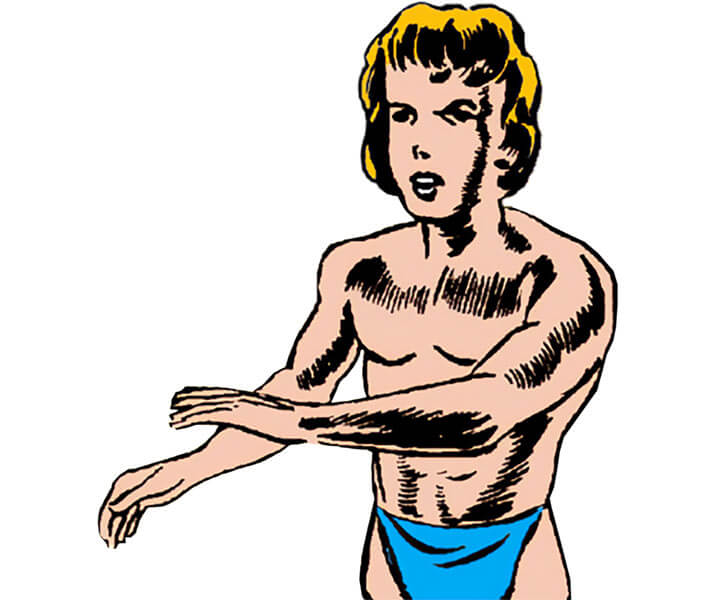 Tuk as a boy, just after his adoptive father dies.

One caption states that it was in 50,000 BC. Usually I’d ignore this as an arbitrary round number, as often in Golden Age stories. But as we’ll discuss it’s complicated.

Such elements were just thrown around willy-nilly in a sort of drunk planetary romance  . They included :

Nearly all opponents in the setting had modest stats (mostly 02s with some 03s here and there). This allows Tanir and eventually Tuk to shine in comparison.

Tuk appears to be the son of a couple named Rhaya and Phadion. They were ostracizedTo be cast out of a community. from an unrevealed community and left on a faraway shore.

Though Phadion was a mighty wrestler, the couple was eventually killed by wild prehistoric animals. But their baby was saved by a proto-human named Ak. Ak named his new adoptive son Tuk.

Into the great wide open

When Tuk was still a boy, Ak died of old age.

Tuk left the rock country where Ak’s cave was. Apparently, his project was to find whoever had condemned his parents to death (possibly someone named Kadir) and avenge them.

In the jungle, Tuk was saved from cannibals and beasts by a mighty hunter named Tanir. Tanir was identified in captions as “a Cro-Magnon man”. He decided to join the boy’s quest – apparently because it was glorious.

The pair travelled for years, looking for possible lands of origin for Tuk’s parents.

They rescued the tiny city-state of Crete from Hairy One raiders. As a reward, King Amir pointed them toward Atlantis as a possible homeland for Rhaya and Phadion.

On the way the duo rescued Princess Eve from the Witches of Endor. Then they helped her overthrow her wicked uncle back in Atlantis.

Tuk and Tanir then knew they had to head for Attillan, the island of the gods.

On the way, they defeated the evil Bonzo and his raiders, then resumed their travels.

Whether they ever reached Attillan remains unrevealed.

(Decades later, the name would be reused for the city of the Inhumans, albeit with a different spelling. Considering that Attillan was Attilan is, of course, tempting.)

A cryptic version of Tuk appeared in the cryptic runup to the cryptic The Crossing Avengers event in 1995. Which was cryptic.

This character was called Tuc, and was from the future.

Tuc apparently was the son of Crystal and thus the little brother of Luna. This is not incompatible with Tuk’s known origin.

He also had potent mental or mystical powers.

Interested readers can check his Marvunapp profile  for more.

Many participants to The Crossing were later revealed to be agents of Immortus. Most were Space Phantoms. “Tuc” was thus presumably a Phantom.

However, Immortus has entire time-displaced legions. These include elite teams such as the Anachronauts – warriors from multiple eras in the past and future.

It is thus not unthinkable that Tuk may have been recruited by Immortus as an agent. Especially given the occasional mises en abyme  conflating Immortus with the management of Marvel Comics continuity.

Tuk and Tuc might thus be the same person. Possibly. 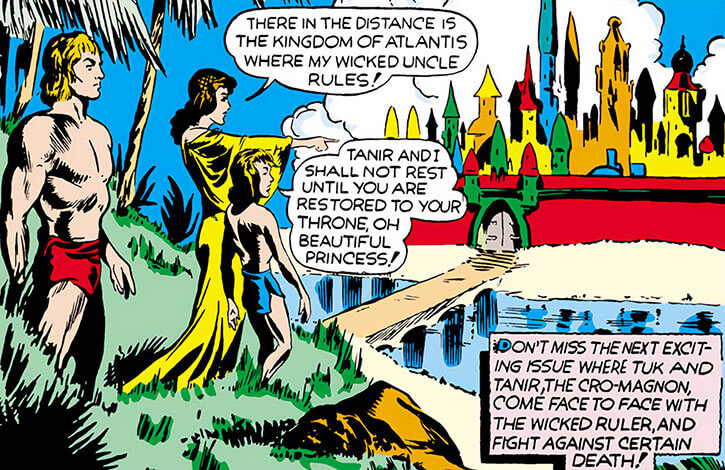 The ABC of his DNA

A pair of beige captions learns us that :

(This data is original to the History, rather than based on previous comics.)

In these models, successful lineages (those who keep having many children over many generations) have a strong impact on human populations. As most large population groups will share a common genetic ancestry within the past 10-to-15 centuries.

If Tuk lived among the first generations after the Great Cataclysm, worldwide human population likely was under one million. Depending upon casualties among non-Atlantean, non-Deviant populations it may have been well under that, forming a minor genetic bottleneck.

And Tuk was an attractive, exceptionally healthy traveller. 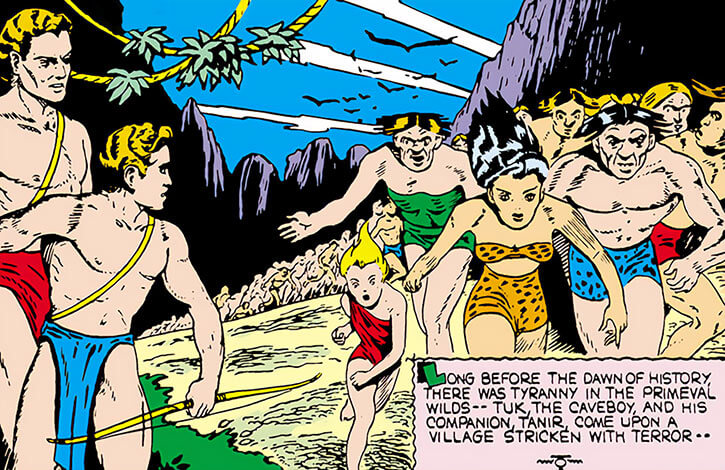 Now, of course, Tuk’s unique genetics would be diluted by half with each generation. Though he would be a common ancestor of nearly every modern human, the inherited material would be minuscule.

However, in a super-hero universe, things can certainly get weird.

One simple hypothesis is that Tuk’s “legacy” is a specific mitochondrial DNA  sequence that gets transmitted through reproduction. Which isn’t normally the case for paternal mtDNA.

Alternatively, the caption might reference the “new Inhumans” population, rather than the Human population as a whole.

New Inhumans are Human persons with trace Inhuman ancestry. This means that they will react to Terrigen Mist just like an Inhuman child would.

The existence of New Inhumans had little impact until the 2010s, when there was a global release of Terrigen Mist. This resulted in thousands of Humans unexpectedly mutating and/or acquiring superhuman powers.

The intent may thus be that Tuk is the one who injected this ancestry among mainline humanity.

There have been other Inhumans who left Attilan and walked among Humans (say, Medusa in her youth). But most presumably knew better than have children with Humans, given the medical risks.

However, the wording of the caption seems to refer to homo superior, rather than Inhuman, genetic heritage. 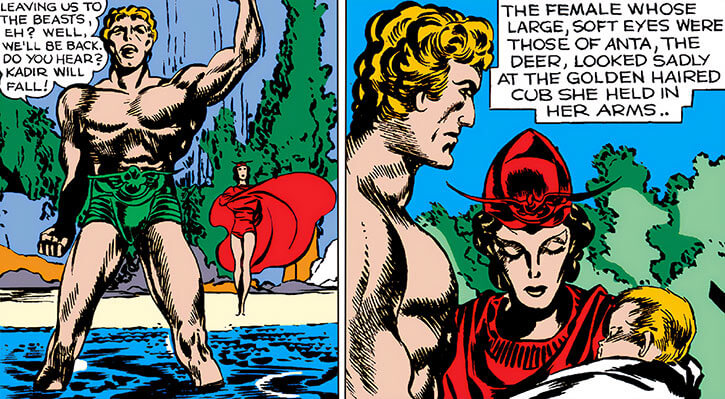 A proper little Lord Fauntleroy. But with a loin cloth.

“It is well these vapor masks were found !”

“Tanir and I shall not rest until you are restored to your throne, oh beautiful princess !”

Tuk (by the fifth episode)

Tuk and Tanir only form Wanderer’s Connections as they keep travelling. 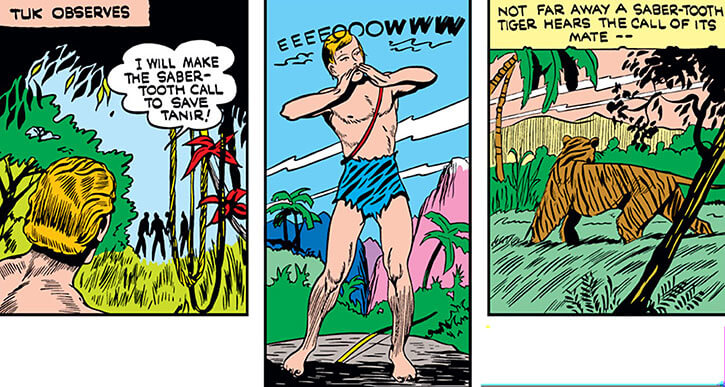 Tuk and Tanir only form Wanderer’s Connections as they keep travelling.