Turf can animate earth, as long he’s in contact with the ground. He mostly uses this power to encase himself in an exoskeleton  made of raw earth, which is :

Beckman mostly prefers direct confrontation using the exoskeleton. He fights like a brick . Frex, he rarely uses his earth control power to full tactical advantage. It’s mostly a means to finish a stunned opponent by having the earth dramatically engulf them.

John Beckman discovered he had telekinetic control over dirt the same day the Squad gained their powers.

However, Beckman was far less open and altruistic than the members of the Squad. He was a nobody, a loser and a couch potato. A psychotic fan — nowadays we’d say a stan — he started hating celebrities when they didn’t respond to his sick letters.

Beckman spent several months mastering his abilities. Then as Turf, he started a campaign of killing celebrities, starting by his favourites or the ones girls liked the most. His rampage was stopped by Hardcase and Choice.

Beckman himself is quite fat, with balding curly hair. He operates naked in his earth exoskeleton.

A psychotic bully, quite confidant and full of rage when he has the upper hand but disoriented when losing.

“You think you’re so cute ! So smart ! Well, you’re both gonna die like that soap opera witch who didn’t reply to my fan letters ! Like that singer all the girls liked before I *ripped his head off* !”

No problem here – he would have fought a celebrity like Booster Gold.

Nowadays I’d likely to an effect-based design like with Armor (Ichiki Hisako). But let’s keep an example of the old approach for thos who prefer it. 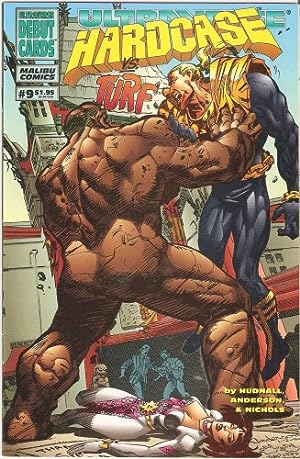