This profile was written many years before the continuity reboot, so it corresponds to the older Expanded Universe version of the setting. The exact sources it uses are listed in the profile’s footer, if you need to be sure.

Sand People are skilled in desert survival and highly knowledgeable about that environment. They are a tough people, commonly skilled with both melee weapons and firearms.

As long as anyone can remember, the Tusken Raiders have lived nomadic lives in the wastes of the desert planet Tatooine.

One tale, possibly apocryphal, purports that Tatooine was once a lush jungle planet. But it was conquered and exploited by a powerful race called the Rakata. Tatooine’s natives took advantage of a plague that weakened the Rakata, rebelling against their enslavers. They won their freedom but the Rakata devastated the planet with an orbital bombardment in retaliation.

The survivors adjusted to life in the wastes, becoming the Sand People.

Other sources suggest that the Sand People became nomadic after offworld settlers disrupted their water supplies. Which of these stories is correct, if either, is irrelevant in some respects. The Tusken Raiders’ clans believe one version or the other and this is sufficient to greatly contribute to their legendary hostility toward outlanders (the Sand Peoples’ term for offworld settlers).

The name “Tusken Raider” is derived from the first known attack by Sand People upon the current wave of colonists. Fort Tusken was an outpost settled north of Mos Eisley. Placed on ground sacred to the Sand People, they destroyed the fort in a brutal attack.

This first encounter set the tone for future relations (such as they were) between Sand People and outlanders.

The Tusken Raiders are humanoids, though determining their precise species difficult because they are always fully covered in public. They are probably human or a variant thereof, since the human Sharad Hett was able to conceive a child with his Tusken Raider mate. Sand People speech is incomprehensible to most others, sounding like a combination of hoots, barks, and roars.

The Sand People are invariably swaddled in rough fabric wrappings and robes. These are colored in light shades of brown to blend into the desert landscape. Tusken Raiders males travel light, as is suitable for hunters constantly on the move scouring large swaths of terrain for prey.

Their few accessories include:

Females tend to have more ornamental masks and longer robes. Their domestic lifestyle allows them more flexibility of dress than the more active males.

Like their culture, the Tusken Raiders’ behavior is largely a mystery. Each clan usually numbers about 20 to 30 members. Sand People have very distinct gender roles, with the females tending to the camp while the males hunt for food and conduct raids. They tend to avoid anyone other than fellow Sand People… except when conducting raids against outlanders.

These attacks are usually motivated by a desire steal equipment and supplies, though prisoners are sometimes taken too. The Tusken Raiders also attack those who come near their sacred locations, usually burial sites or hidden water sources.

The Sand People may allow a select outlander or two to join their clan, if that person has proven himself worthy by completing a very challenging task, as was the case with the exiled Jedi Sharad Hett.

Raiders from the arid

As with many cultures that have arisen in harsh environments, the Sand People are ruthless and devout in their adherence to their social laws. Even an offense as trivial as removing one’s clothing anywhere but within their dwelling (and then only in front of family) or on their wedding night is sufficient to be punished by banishment or execution depending on the tribe’s particular laws.

Storytellers — the oral historians of the Sand People — must recite the long complex histories verbatim. Any mistake carries an automatic death sentence. When youths reach the age of majority, they must prove themselves ready for adulthood in a trial by combat, a quest commonly satisfied by raiding an outlander settlement or facing a krayt dragon.

Banthas may be symbolic of both the freedom to move as well as being in harmony with the desert and its inhabitants. Regardless of the meaning of the bond, when one of the two dies, the other is sent out into the desert to die as well.

Sand People are very adept at using their banthas for transportation. They will travel single file to keep trackers from being able to determine how many of them are moving together.

Battle on the erg

While the Tusken Raiders are very aggressive in many ways, they will not hesitate to retreat in uncertain or dangerous situations such as hearing the approach of a krayt dragon (a animal that is tough and fierce enough to challenge even a fledgling Jedi).

Life in the unforgiving environment of the Tatooine desert has taught them when to take advantage of a target’s vulnerability and when to step back and carefully assess the situation. Sand People may momentarily flee if startled, but they will soon return with reinforcements.

If you don’t want to have a Star Wars crossover, the Sand People could be another human-variant race like the Feitherians. They would be a legendary people living in an isolated part of a large desert.

Connections:
Their own clan (High), other Tusken Raider clans (Low).

I used the elephant and canine stats in BoH:SE for the banthas and massifs, respectively. If you’re using different stats for those animals in your campaign, those stats can be applied instead of the ones below.

Banthas are 8-9’ tall mammalian quadrupeds with long shaggy hair, large ram’s horns, and puggish, thick-lipped faces. They are used as transport by Tusken Raiders hunting and patrolling in the Tatooine desert. 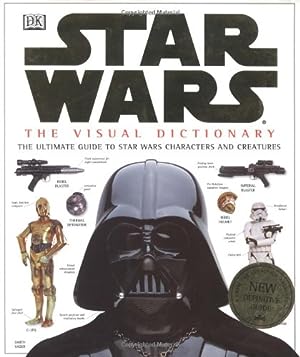 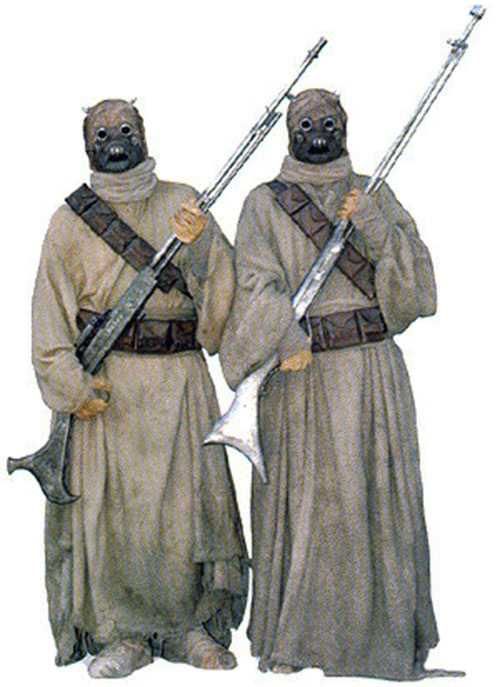 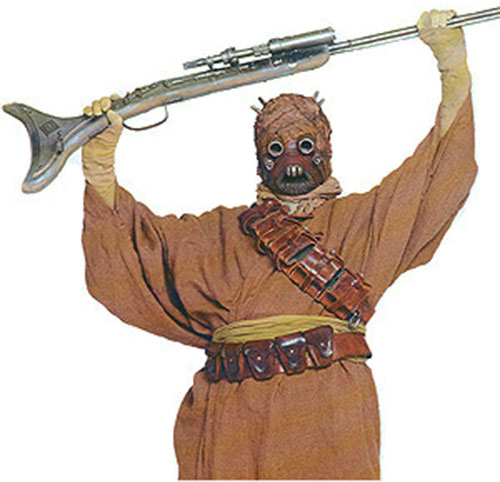 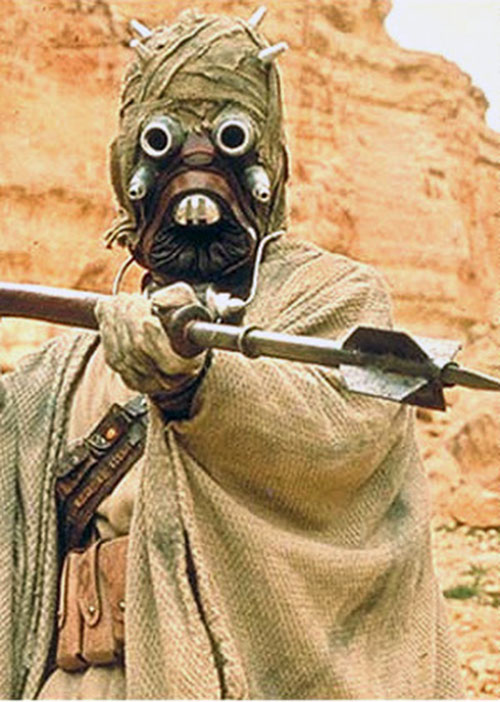 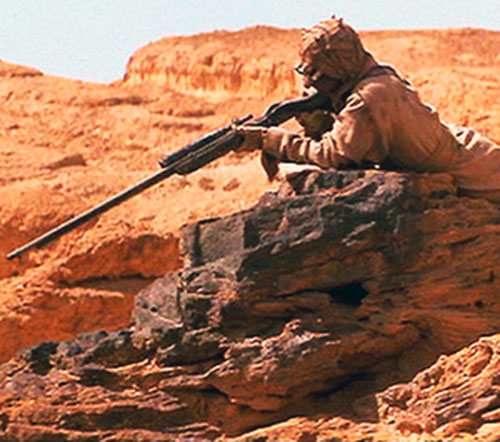 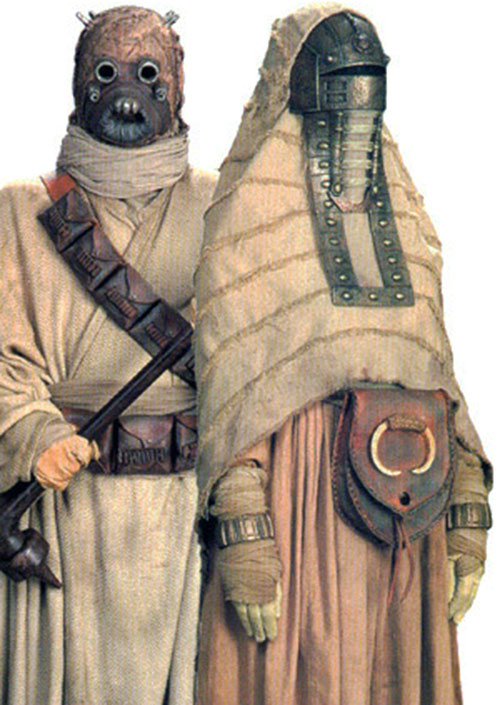 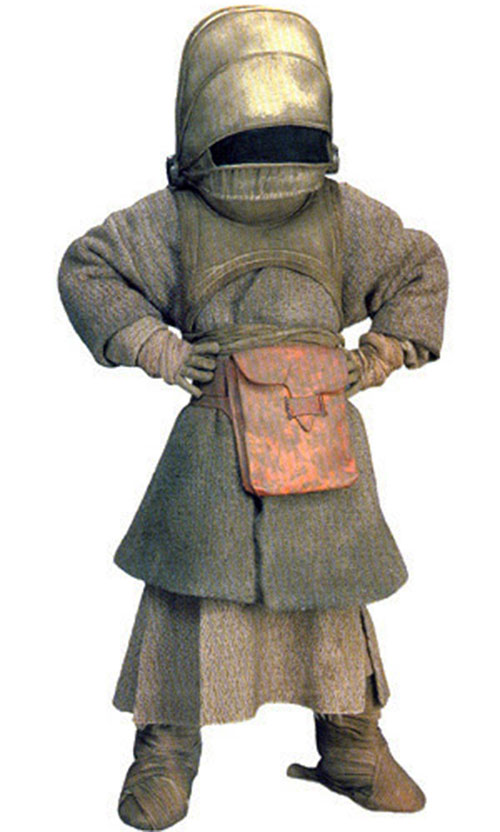 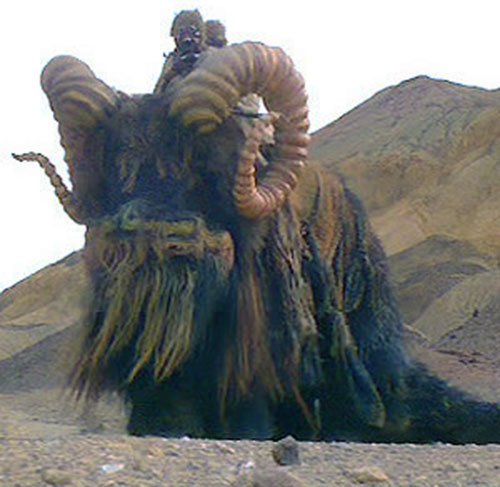 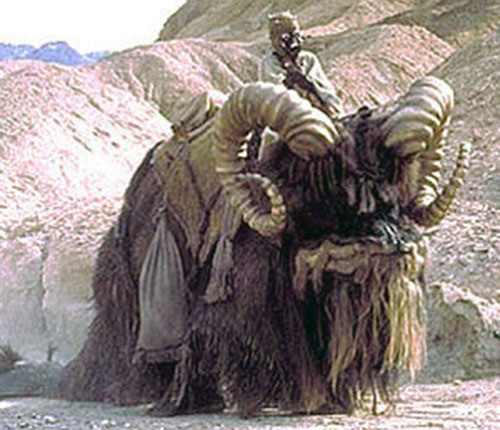 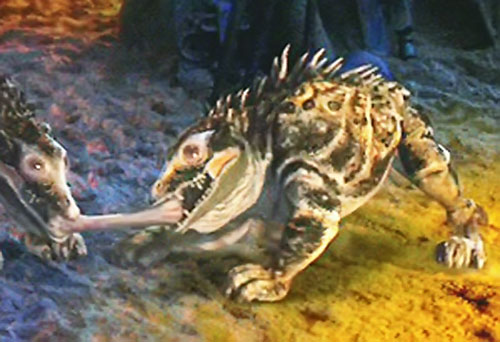