Two-Bad is another of Skeletor’s evil warriors in the 1983-1984 He-man and the Masters of the Universe animated series. With two heads that argue with one another.

For more context about these old cartoons, see our article about the Masters of the Universe setting.

He is a muscular two-headed warrior. Much like Siamese twins sharing the same body.

He’s best suited as a pilot or guard.

Though under-utilized, he’s quite a good gadgeteer. He built the Pulser, harnessing the power of an electromagnetic pulse into a ray.

The constant arguing contradicts the idea that two heads are better than one. Plus, they’re not too bright.

While touted as a strategist, Two-Bad is mostly comic relief. He’s only seen on guard duty or taking orders from Skeletor. 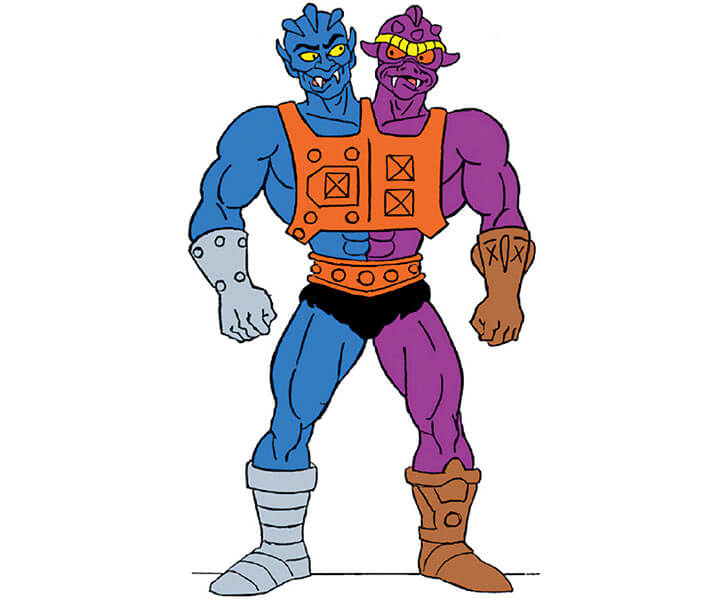 Two-Bad proved to be loyal to Skeletor from the start.

When the Earthman refused to talk, Skeletor used a “Truth Scanner” to force him to speak. Two-Bad and Spikor dragged Mark off to the prisons after he told about the nuke aboard his ship. Skeletor planned to use it on Castle Grayskull.

Later, Two-Bad was seen betting on tossing stones into a bucket. One head betting against the other. By this time, Beast-Man had relieved Spikor.

He-Man and Andria showed up to rescue Mark. Andria threw stones at Beast-Man and he blamed Two-Bad who was still tossing pebbles in a bucket.

Beast-Man bullied Two-Bad, placing buckets on each of their heads. Beast-Man was about to start throwing stones of his own, lifting a huge boulder. 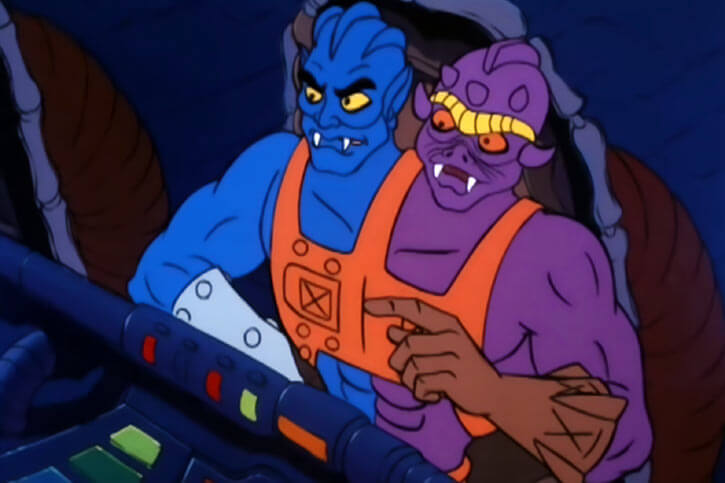 Skeletor ordered Two-Bad to kidnap Zagrass, the comet keeper. Without him, the comets would go wild.

Two-Bad advised against trying to control the comets. He reminded Skeletor of his failure with the Cosmic Comet. (This was from Season one, episode “The Cosmic Comet”).

Skeletor reasoned that if he controlled the comet keeper, he’d control the comets too.

Two-Bad hid at Zagrass Mountain. As soon as Adam and the others left, he stepped out and grabbed Zagrass.

He delivered him to Skeletor at Snake Mountain. The comets started causing damage as they roamed over Eternia.

He-Man and Teela took a Wind Raider to Zagrass Mountain. Skeletor taunted them, revealing he was responsible for kidnapping Zagrass.

When Two-Bad detected He-Man’s approach, he notified Skeletor. He then used his Pulser invention to shoot down the Wind Raider. It crashed in the nearby swamp.

Two-Bad flew a Roton to look for them. He tried ramming He-Man with the Roton. But He-Man stopped it flat and tossed them into the mud.

Two-Bad piloted Skeletor’s Collector, along with Rattlor, Spikor, and Webstor.

Their failure pushed Skeletor to eject them all with but one parachute.

Two-Bad was last seen slowly drifting to the ground, all four warriors clinging to each other.

Two-Bad has two heads and a larger than normal torso. He looks like two warriors fused into one.

His left side is purple with scaly skin while his right side is blue and has a smoother appearance.

He wears a heavy chest plate and an iron gauntlet and boot on his right side. His left half wears a leather glove and boot.

Though they appear in several episodes, they have limited screen time.

Two-Bad is almost always utilized as a guard, or monitoring Skeletor’s crystal ball.

Two-Bad has two distinct personalities. One may know something the other doesn’t. They can easily fall to arguing with each other, calling names, and threatening each other.

The concept of two beings in one — one good, the other bad — was discarded during the creation phase. The idea that his heads didn’t get along remained.

Two-Bad’s original concept was to trick enemies into believing they were facing two warriors instead of one. But that was only really shown in a commercial for the new figure.

The writers instead went for the comedic value of one being arguing with himself. 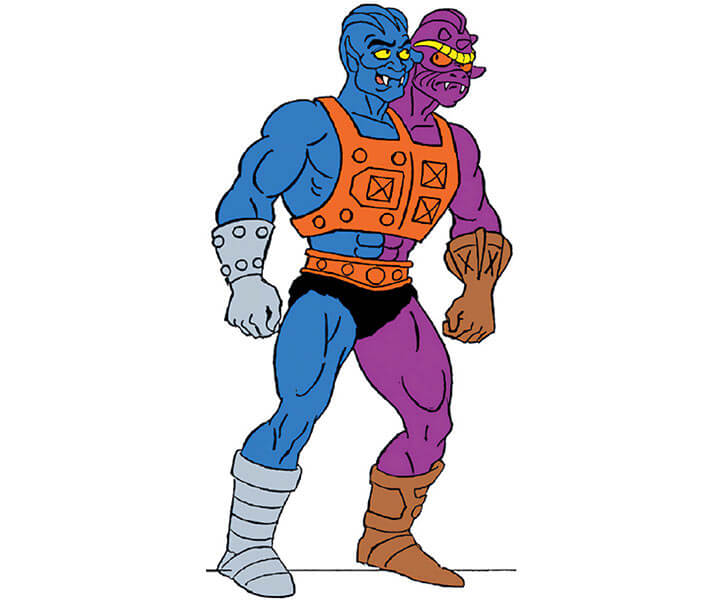 Two-Bad (blue head): “You watch the prisoner; I’m going to get some sleep.”
Two-Bad (purple head): “Well, don’t make it long. I’m tired too you know.”

(An alarm sounds).
Two-Bad: “Uh, uh, Skeletor, intruder alert !”
Skeletor: “I know what it means.”
Two-Bad: “It’s He-Man !”
Skeletor: “Of course it’s He-Man.” (looks at the audience) “They say two heads are better than one, but I think they’re wrong.” (looks back at Two-Bad) “Did you think He-Man would do nothing ?”
Two-Bad: “Eh, you want me to try my new defense system ?”
Skeletor: “No, I want you to open the front door for him. Of course, I want you to defend Snake Mountain !” 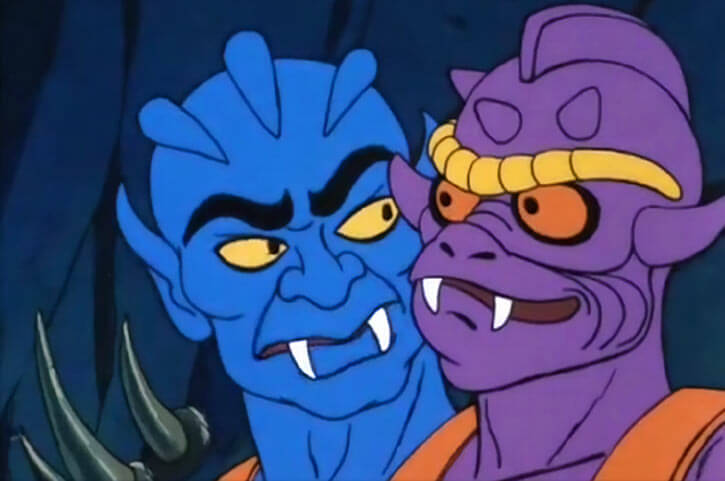 Two-Bad is a stand-out villain with a unique look. He’d make for intimidating muscle or hired mercenary.

Possibilities grow when you increase their intelligence and put those two heads to better use.

Also, if you allow him to act as two individuals, each getting their own Initiative, etc. He could make two attacks per round and make team attacks all on his own. Even though he doesn’t utilize this in the series, one could imagine he’d be far more dangerous.

A 301 points Character (without equipment).

His action figure had a small orange shield. He doesn’t have it in the classic series.

Source of Character: The 1983/1984 animated series He-Man and the Masters of the Universe and the He-man and She-Ra: A Christmas Special; Voiced by Lou Scheimer.