The main character isn’t really named in the story. “Malignant brain” and “tyrannical Count” are the two most distinctive ways he’s called in the captions. So we used that as an arbitrary name – hence the quote marks.

For what it’s worth, this story occurred 10 years after the first appearance of Monsieur Mallah and the Brain.

The Count was apparently some sort of mad scientist. He designed a method to artificially enhance the brain of gorillas to turn them into skilled and fanatically loyal servants. Our game stats assume that he could design inventions but needed engineers to build them, since that was his modus operandi in the story.

After he became a disembodied brain, he could fly and shoot lightning. Furthermore, the Malignant Brain could absorb immense quantities of electricity. It presumably fed off of electrical energy, since it had no other apparent mean to sustain itself.

When infused with gigantic quantities of electricity, the brain would grow larger and develop other mental powers.

The Tyrannical Count lived in an unspecified — but mountainous — Eastern Europe country. From context Yugoslavia is the likeliest possibility. As per Hammer horror movies  tradition he ruled through terror over the nearby village.

The locals feared his cybernetic zombie gorillas. These apparently were his crowning achievement in the unnatural sciences. However, the natives grew restless, and the Count drew a contingency plan were they to attack en masse.

When the villagers stormed the castle with literal torches and pitchforks, they killed a number of zombie gorillas. But by the time they reached the Count, he had drunk a poison and killed himself rather than face them. Some days later, monks sent by relatives came to take custody of the body. The now-free peasants let them proceed.

This was all part of the plan. The “monks” were actually disguised gorillas, the Count’s three remaining zombie servants. They drove to a port and rode a boat to America with the coffin.

In New York, they were greeted by Dr. Rundhaven. This mad genius had devised a process to surgically extract a brain from a corpse. Then Rundhaven would reanimate it as a disembodied encephalon floating in a special liquid.

Brain in a jar

As soon as the process was done, the Malignant Brain slew Rundhaven with a lightning discharge. Continuing with his plan, he then endeavoured to steal the work of Dr. Ralph Ervin on psycho-kinetics. This would give him the means to fly and exist outside of his liquid tank.

The Count invaded the dreams of little Susie Ervin to mesmerise her into stealing the papers. But the Sandman (Dr. Sanford), eternal and immortal guardian of dreams, detected the intrusion and chased the telepathic brain away. 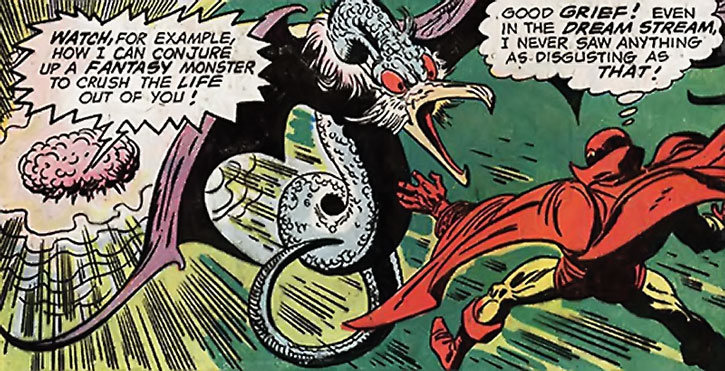 This was but a setback. The Brain sent in his two remaining zombie gorillas, who bushwhacked the scientist and brought back the notes. He then sent them to steal scientific equipment. The brain’s goal was to build a machine based on Ervin’s work.

The gorillas were spotted by the NYPD. But working quickly, they built the machine before the cops came in to arrest the strange thieves. A fight erupted, with the police gunning down the gorillas and being electrocuted by the Malignant Brain in return.

attack of the giant evil brain

Now much larger, flying and glowing, the Malignant Brain took to the sky. It slowly, ominously drifted toward the Con Edison’s Bronx power plant. His plan was to lure the authorities into electrocuting him using the power from the plant.

It was indeed what the police intended to do. Presumably, the Count planted the idea in their dreams. Thus, as the flying brain descended upon the power plant, it was struck by an enormous discharge. But it just absorbed it and then the energy within the whole plant, blacking out the Bronx.

And now, a continuity note

Years later, the Sandman (Garrett Sanford) would meet Wonder Woman and then the JLA. This meant that his previous adventures – and thus the Malignant Brain – took place on Earth-1 of the pre-Crisis on Infinite Earths DC Universe.

However in 1989 the Jed Paulsen adventures were retconned into having been dreams of a little boy named Jed Walker. It is thus likely that the Malignant Brain was but a child’s nightmare. He certainly feels like one.

*However*, at least one character (General Electric) appeared both in the Jed Paulsen dreams and on Earth-1. Thus, it is possible that the Tyrannical Count existed on Earth-1.

The stats for the Count before his death are even less documented, but he presumably had DEX 02 STR 02 BODY 02, and no Strange Appearance or CPR. Nothing unusual was apparent.

After using his Energy Absorption Power on gigantic quantities of electricity, the Malignant Brain developed new Powers, and grew to a larger size. The two documented abilities were about 10 APs of Mind Probe and a sort of Image Animation Power to bring to life creatures that he made up. The latter had a cap of about 9 APs to their stats after Growth gets applied.

To me, my zombie gorillas !

The evil Count was faithfully served by zombie gorillas. The top of their head had been replaced by a transparent dome with electronics. In this they were much like General Electric, a villain who appeared but two issues before.

The story features three gorillas, then two – what happened to the third is unknown. There were more zombie gorillas, but most were killed during the uprising.

The term “zombie” is apparently to be understood in the sense of a selfless slave. The gorillas showed no sign of being undead. In fact the artificial bits in their brains gave them heightened intelligence and they could think, talk and even act as well as any human servant, if not better.

They were handy with technology and could quickly build and assemble complex machines.

The gorillas considered that the Count had given them life. Thus, they thought that their duty was to lay down these lives for him when needed.

Bonuses and Limitations:
Density Increase is Form Function, Always On and Already Factored In.

Equipment:
The gorillas generally go unequipped, but were once outfitted with robes and lifelike masks to pass for human. 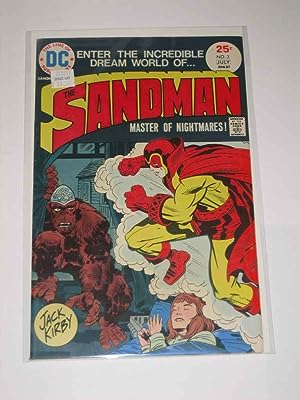 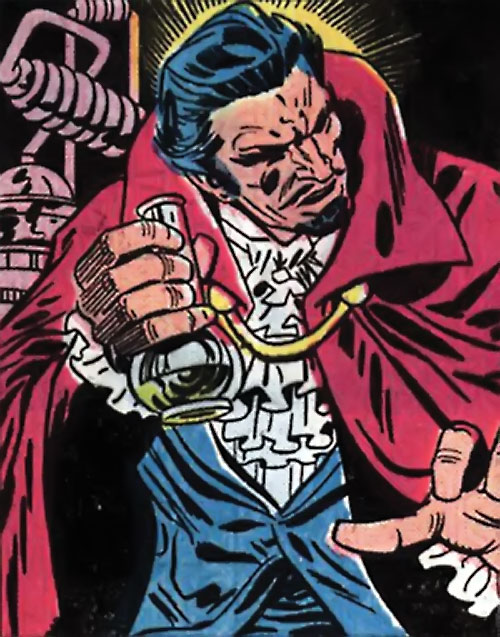 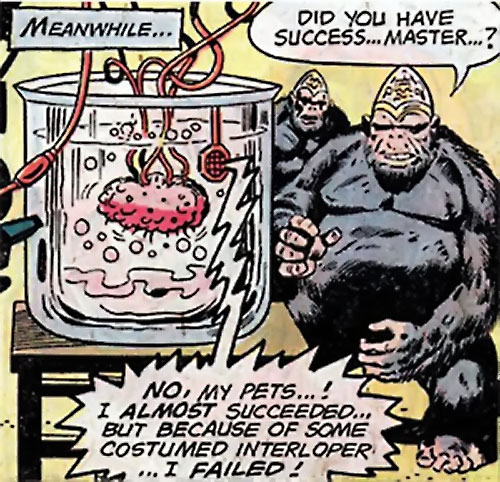 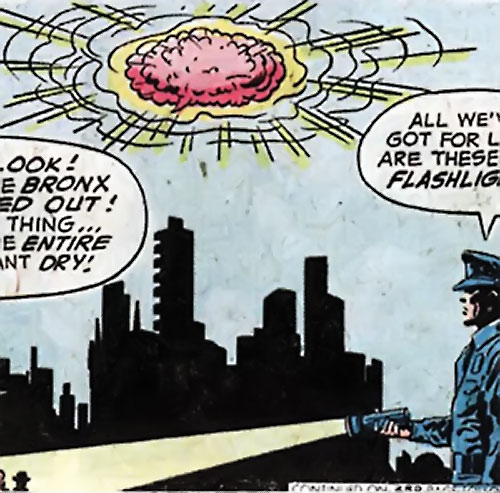 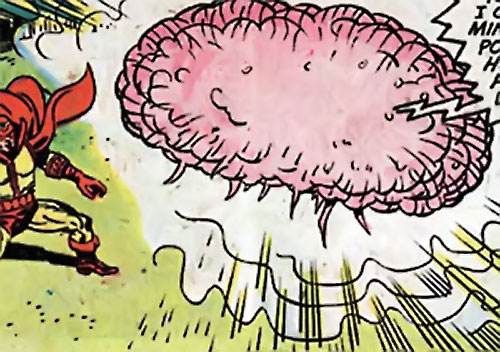 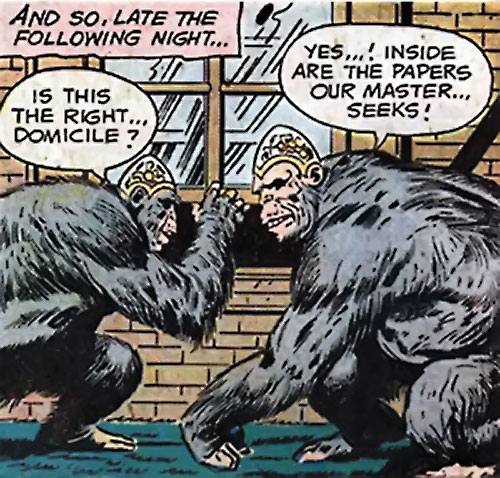 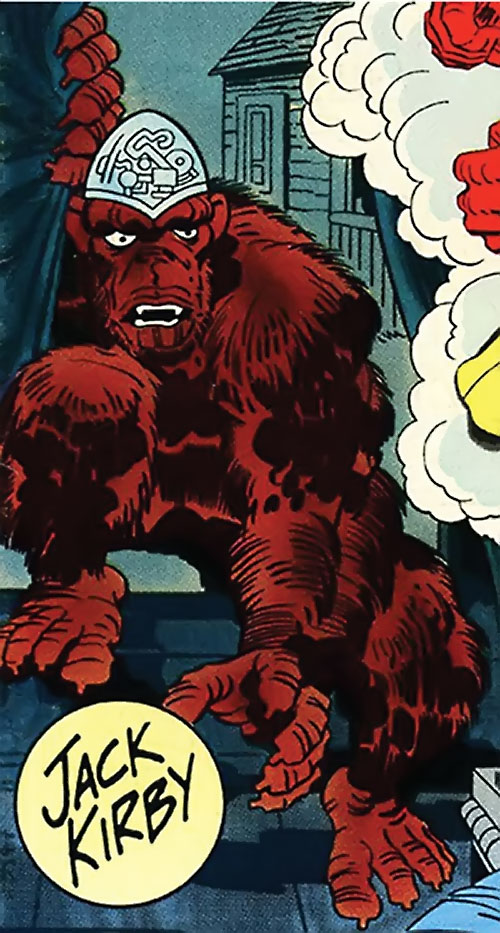