Übermensch and his Axis Amerika commandos are World War Two characters. But they appeared in 1987, with the bulk of their material being in the Young All-Stars series.

He resembles some other wartime Nazi comic-book villains. See our Captain Nazi disambiguation page for more ’bout that.

Young All-Stars was written shortly after DC had its Crisis on Infinite Earths. One important consequence of the Crisis was the disappearance of many of DC’s Golden AgeSuper-hero comics from the late 1930s to the early 1950s characters.

Given this context, it is notable that the Axis Amerika members were all Nazi versions of Golden Age DC heroes who had been retconned out :

As to Kamikaze, who joined later, he strongly evokes Bulletman.

Übermensch was a minor part of a push by veteran super-hero comics writer Roy Thomas to :

The key references in Übermensch’s case were :

If you want to grokIntuitive yet robust understanding of how something works everything, I’d suggest that you first read our character profile for Hugo Danner – the protagonist of Gladiator.

By the standards of the post-Crisis 1940s DC Comics New Earth, he was quite powerful. Not on the level of Green Lantern (Alan Scott), but few people could fight Übermensch toe-to-toe.

For instance, his strength seemed to be at least “Class 50”.

One scene implies that he can see in the dark, though there’s some ambiguity.

Übermensch’s chest emblem could signal orders to his team, such as a withdrawal order. How it works isn’t clear – maybe they all have small radios. It also seems that it can have the aircraft (below) fly to a preset position and hover, for extraction.

The Axis Amerika team had a large aircraft. It was capable of both hovering in place and of fast flight using slightly-ahead-of-their-time jet engines. It was painted yellow, perhaps for defence against Green Lantern.

Another aircraft was the Nuremberg. This Hindenburg  -sized zeppelin was a mobile base, equipped with smoke dispensers. The dirigible could thus shroud itself in what looked like a dark cloud.

However, the Nuremberg was destroyed by the Young All-Stars. It was replaced by another dirigible, but it seemed to be a more ordinary model.

The Axis team also once drove a powerful, streamlined six-wheeled truck. In order to be less noticeable, this huge van was painted lavender and with “BAY LAUNDRY’ logos.

While its top speed isn’t much better than an ordinary truck’s, it has a submersible mode. Sea-Wolf dubbed it the “Untersee-wagon”. 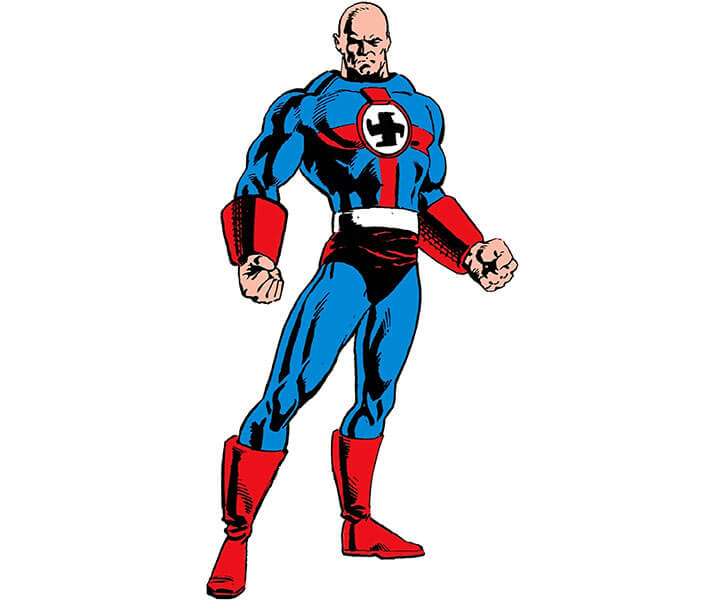 They do retro-yet-modernised music that was popular in Germany during the 1920s and early 1930s. With vintage Weimar looks and everything.

For the benefit of non-Germanophones, let’s go with a classic 1930s American jazz song – “Smoke gets in your eyes”.

During the late 1930s, a German Abwehr commando unit deep in the Amazon located the Land That Time Forgot. It is possible that they had access to intelligence about Professor George Edward Challenger’s famous expedition.

(In 1943, this German foray is described as having taken place “some months” ago. But this statement clearly was mistaken).

They found the super-strongman Hugo Danner, who had faked his death and now lived there. He saved them from a tyrannosaurus attack, then told them to get lost.

However, the military intelligence operatives doubled back. They managed to steal some of Abednego Danner’s notes about his super-strength treatment. But most were then killed by dinosaurs.

Übermensch was empowered using the Danner treatment. However :

Axis Amerika was a commando unit formed by Adolf Hitler, apparently in early 1942. It was to conduct assassination missions in the USA, to eliminate costumed heroes there.

Most members seem to have been German. But the team’s archer, Usil, represented Fascist Italy. And Tsunami (Shimada Miya) was meant to represent Imperial Japan, though she deserted before she actually joined.

Not long after the Axis team arrived in the US, its member Gudra confirmed that TNT (Tex Thomas) was dead. Though that was at the hands of ordinary Nazi saboteurs. 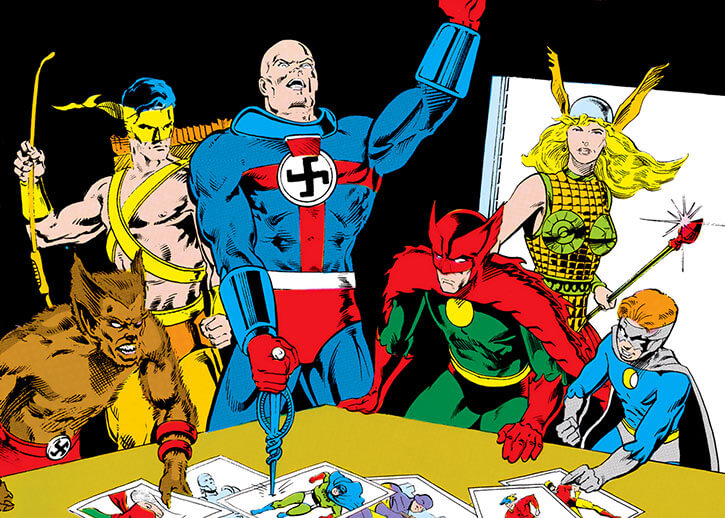 Assault on the Perisphere

Back then, most costumed heroes in the US were part of the All-Star Squadron, headquartered in New York City.

Axis Amerika launched a surprise attack straight against it, when there were relatively few heroes present.

This blitzkrieg initially was a success. Johnny Quick, Liberty Belle, the hawks, Tarantula, Sandy the Golden Boy, Firebrand, etc. were soon defeated or on the ropes.

But the heroes rallied – and unexpectedly received reinforcements from the youths who would soon become the Young All-Stars.

Übermensch was intrigued when he discovered the hitherto unrevealed existence of “Iron” Munro. He immediately realised that he too had been empowered by the Danner treatment.

During the battle, the Axis team also planted spy microphones. These would provide them with superb intelligence about A2S activities for a while.

But once the momentum was lost and further reinforcements came in, Übermensch ordered a retreat.

Part of the Young All-Stars debut involved a performance at a war bonds rally at the Hollywood Bowl.

Übermensch decided to strike there, as killing off the youngest A2S members would damage American morale.

But the attack did not take place. A racist riot over Tsunami’s presence broke out among the servicemen at the Bowl. Übermensch considered that attacking amidst this chaos would result in misattribution of the kills.

The Axis team soon ambushed the Young All-Stars. They captured the most dangerous ones — “Iron” Munro, the Fury (Helena Kosmatos) and Flying Fox.

Of course there’s a zeppelin

With these down, Übermensch decided that luring the rest into an ambush to free their comrades was worth the bother. He beat up Dyna-Mite (Daniel Dunbar) but left him alive so he could warn and reel in the others.

The young prisoners were held in the Nuremberg, Axis Amerika’s stealth zeppelin. However, the fight didn’t go as scheduled when the other Young All-Stars showed up.

Fledermaus was killed in the fray. Axis Amerika retreated in unclear circumstances, perhaps to avoid incoming US armed forces.

Axis Amerika regrouped in a secret base in Mexico. It was commanded by Baron Blitzkrieg and ran Axis covert operations in the US.

Blitzkrieg was attempting to decipher what the “alloy tubes” Allied code phrase meant. His Japanese ally Sumo narrowed it down to atomic bomb research.

To dig further, Blitzkrieg sent Axis America after those Project Manhattan scientists who the Young All-Stars had been detailed to protect.

Horned Owl and Usil captured a netload of Project Manhattan scientists. They also killed one of the Young All-Stars, the Tigress (Paula Brooks), to avenge Fledermaus. Meanwhile, Übermesnch captured Dr. Einstein and his colleagues, as well as “Iron” Munro.

All prisoners were taken to a secret Nazi base hidden under a Kansas farm. Blitzkrieg used the Manhattan scientists to build his own atom bomb, set to destroy Kansas City. 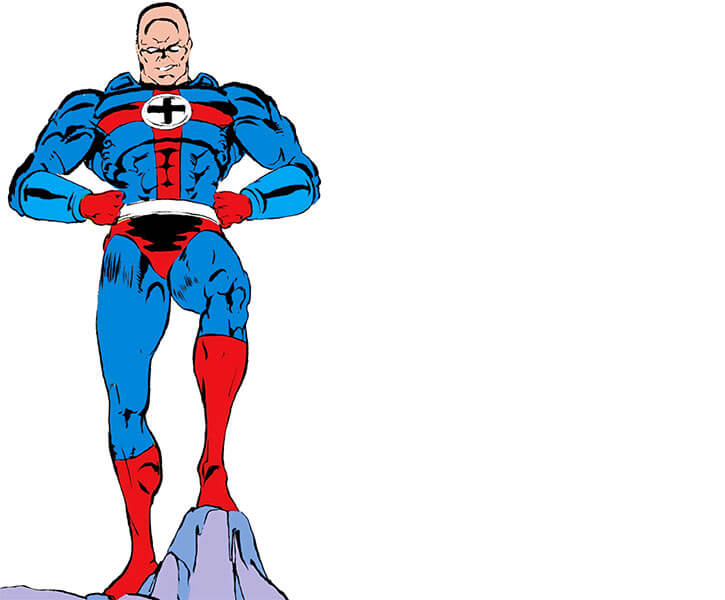 Row of the supermen

As Übermensch was interrogating “Iron” Munro, the lad broke free. He kneed the startled German in the groin, which gave him an advantage during their brutal battle. Munro eventually won, albeit in a sorry state.

The Valkyrie Gudra, who was in love with Übermensch, pleaded with Munro to spare him. In exchange, she magically returned the Tigress to life – then fled carrying her romantic interest.

(As Gudra cryptically warned, having been dead altered Paula Brooks’ personality. The lass would soon desert the All-Stars and become the renegade Huntress).

Having learned during his interrogation at Übermensch’s hands that Hugo Danner was still alive, “Iron” Munro then deserted the All-Stars to go looking for him.

At this point, the Young All-Stars mostly disintegrated. So Axis Amerika had been successful, in a way.

According to Fireball, Übermensch would later be active on the Eastern Front, where he inflicted tremendous losses to the Red Army.

During the 2000s, a man resembling Übermensch was seen as a Society operative. However, his costume used the Captain Nazi palette.

The simplest explanation is that it was Übermensch (Mr. Shepherd), the co-leader of an American secret Fascist cult seen during the 2000s. These guys patterned themselves as a new version of Axis Amerika – but Shepherd didn’t usually wear a costume resembling his wartime predecessor’s. 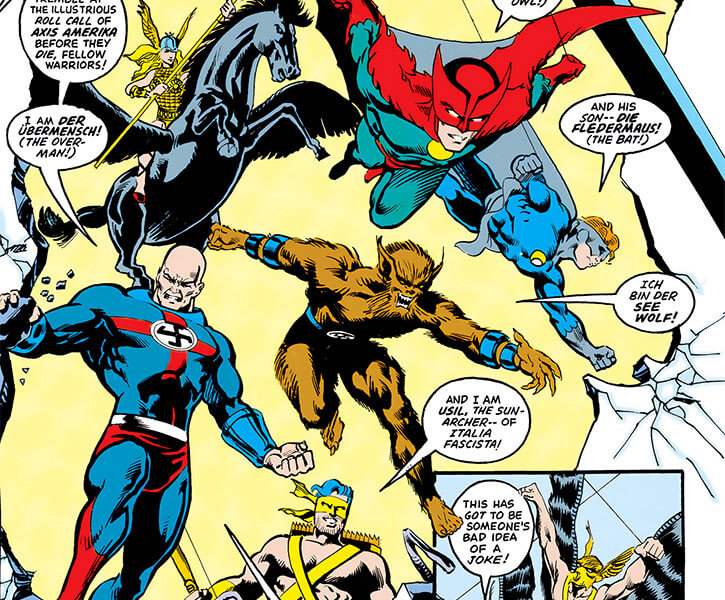 How glad am I to be superhuman

The Nietzschean “overman” or “superman” is a person strong enough to embrace reality as it is and make their life unto a work of art. Forging their own moral code free from the fears and beliefs of conventional society.

The Nietzschean übermensch’s stark will creates meaning in a world without a God.

The Nazis later used the word with a warped meaning, to describe a “master man” of their “master race”. In this sense an übermensch is a great warrior. He has the courage and willpower to triumph over many men of inferior racial stock and from impure societies, yadda yadda.

Übermensch is completely bald. He doesn’t take remarks about that well. Perhaps the loss of hair was a side effect of the treatment that gave him his powers ?

An overbearing, domineering, confident strongman and strategist. Übermensch is almost always collected and rational, but it is clear that he has a great capacity for anger and violence.

Axis Amerika acts more like terrorists than soldiers. Their mission is demoralisation through assassination, rather than simply doing damage.

Übermensch will therefore stay his hand and try to engineer his kills to have the greatest possible impact. Which runs a clear risk of ending up empty-handed in the pursuit of maximalisation.

He’s also a cautious leader, preferring retreat to taking uncontrolled risks. There’s no “bah, we’ll just escape captivity later if that fails” aspect to his strategy, as there’s a war going on. His operatives are too hard to replace to pointlessly risk casualties.

Übermensch seems to have a huge ego. In particular, he will not take orders for anyone beside Hitler… unless the Führer ordered him to cooperate with another Nazi officer, of course.

Übermensch had a strong interest in locating Hugo Danner. The possibility that “Iron” Munro knew about Danner’s current whereabouts meant that Übermensch wanted to keep him alive.

“Let them tremble at the illustrious roll call of Axis Amerika before they die, fellow warriors ! I am der Übermensch !” 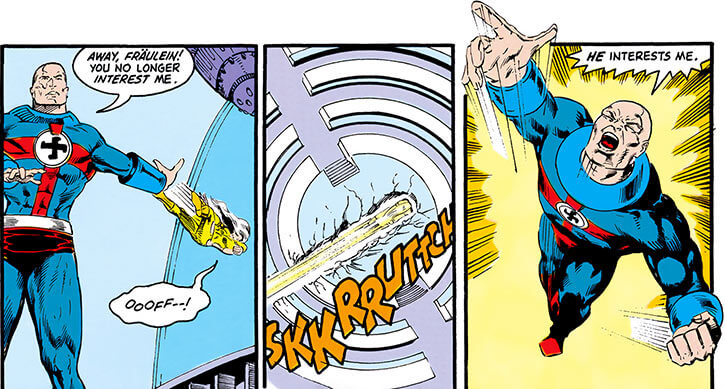 The standard approach is in effect here – to stick with the Mayfair scores as much as is reasonable. This is easier with 1940s characters, who tended to be able to do whatever the story required.

I lowered his OV by a bit since he never dodges blows. People can always hit him. But only by a bit, since those who attack him are high-AV Characters. And it seems credible that they are spending some Hero Points on AV to score those hits.

The fight scenes in early A2S issues do not really feel like a STR of 12 to me when I look at the Knockbacks, and the damage they inflict. More like a 15, quite possibly more.

*But* it’s still possible with the STR scores in play. And the likes of Übermensch, the Fury, “Iron” Munro, etc. can’t have that much STR given the results when they hit more ordinary Characters. So let’s keep the World at War STR/BODY scale intact whenever possible.

There’s also too little material to do serious stats adjustments. Axis Amerika only appeared in two storylines, then the All-Star comic books were cancelled.