Brian M. Bendis once again told the story of young Peter Parker from New York City, and his becoming Spider-Man. The storytelling was now much more sophisticated though, with strong empathy for the characters, trademark snappy Bendis dialogue used right, drama, excellent art, and lots of improvements all around.

In the end, the Ultimate Spider-Man mythos was one of the few things that survived from the Ultimate Comics experiment.

The genetically altered spider that bit Peter radically transformed his DNA. This granted him the proportionate abilities of a common house spider. Among these abilities are:

He normally uses the amazing adhesive webs to travel throughout New York City. Spider-Man swings from building to building in his own unique acrobatic style. However, he has also discovered other uses for the sticky fluid. These range from creating web nets to a good old fashion squirt of fluid in the eyes of his opponents, blinding them momentarily.

On a class field trip to Osborn Industries, Peter Parker was bitten by one of the test animals: a spider. He soon found he had strength and speed he didn’t know he possessed. He also developed a sixth sense that would warn him of danger. Most shocking of all, he woke up in the middle of the night and discovered he could crawl on walls.

At first, Peter felt like a freak. He didn’t know where to turn. He found his new powers hard to cope with and control. He fought Flash Thompson, the school bully, and accidentally broke the boy’s hand. He began experiencing mood swings, lashing out at his Uncle Ben and Aunt May.

Peter also used his fledgling abilities to join the basketball team and become a pro wrestler. 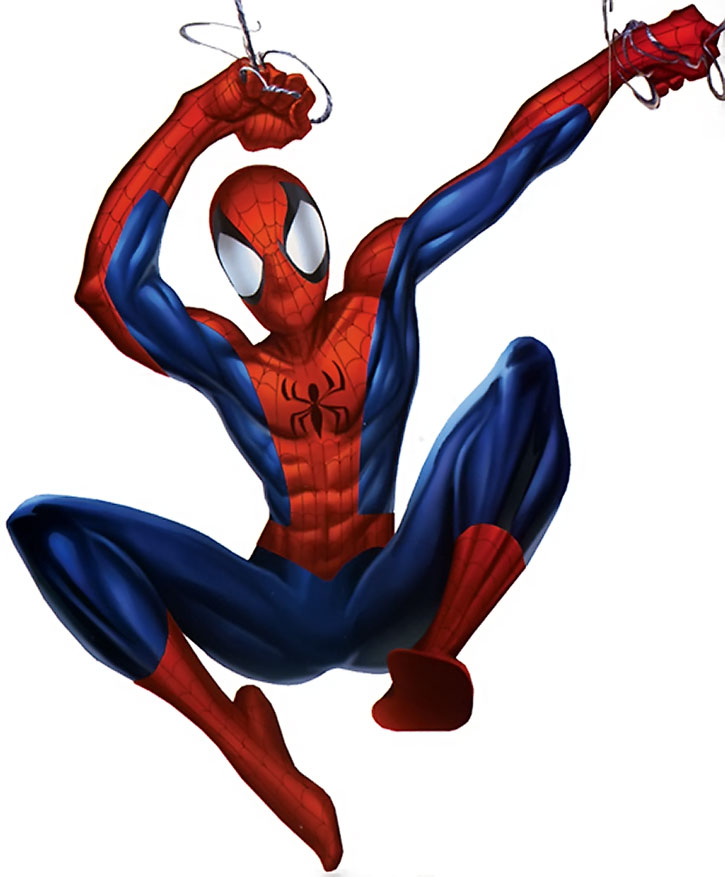 His ego inflated by the heady feeling of wrestling stardom, Peter chose to mind his own business when he encountered a criminal fleeing the scene of a robbery — even though he could have captured the thief easily with his newfound spider-powers. A few nights later, a burglar entered the Parker home and demanded the family’s money.

When Ben quipped that the thief probably had more than they did, the man shot him at point-blank range.

Meanwhile, Peter had vowed to share his secret with the people who had raised him like a son. Returning home, he found police cars surrounding the house. Aunt May was hysterical.

When he overheard a police bulletin saying Ben’s murderer had been cornered in a nearby warehouse, Peter donned his wresting costume. He then dashed off to avenge his uncle’s death. Upon seeing the hoodlum’s face, he recognized him as the crook he had allowed to escape days earlier.

The moment Peter realized he could have saved his uncle, he understood the words Ben had spoken to him that night: “With great power, there must come great responsibility.”

Peter Parker is a typical, but unusually smart 15-year old. He lives in a quiet, not very rich Queens suburb and goes to a typical high school, complete with school bullies, varied professors and the like.

He’s in many ways a complete geek. He loves science, reads a lot, loves computers and the Internet and spend a lot of time in his thoughts. He used to suck at sports.

Still, when he wants to interact with others he can be quite lively, humorous and charismatic for his age. Thus, he’s not an unpopular teenager and he has a good amount of friends. It’s just that he often has a lot on his mind, especially since he became Spider-Man. 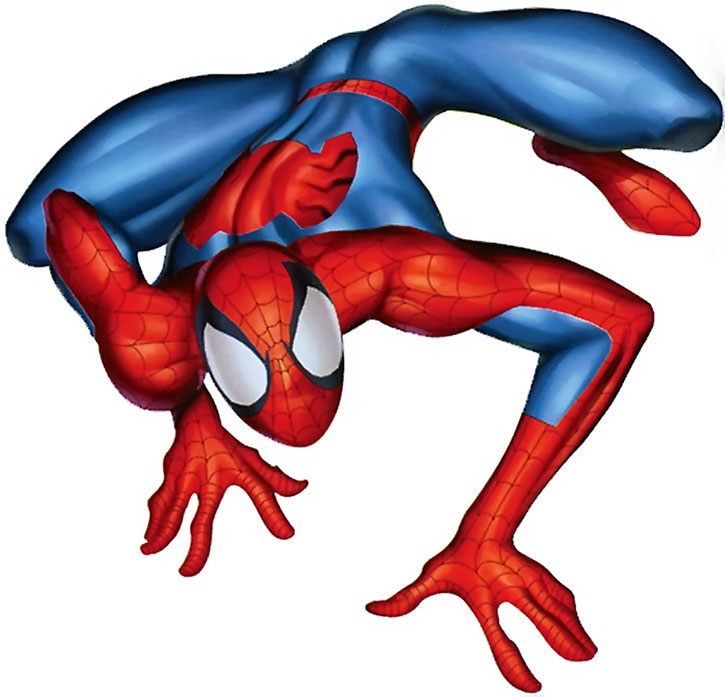 He has a nascent, teenage love affair with Mary-Jane Watson, but it’s obviously his first. Both kids are unsure of how to behave and have easily bruised feelings – especially the MJ. Still she’s his best friend, trusted confidant and silent assistant. Mary-Jane is also a bit of a geek, wanting to be a straight A student and nicknamed “Brainy Jane”.

As Spider-Man, Peter tries his ardent best to be a “big time super-hero”, to make the streets safe and to rise up to his “big responsibility”. He feels thoroughly compelled to do the best he can. He uses all of his abilities, to make the word a better, safer place.

Since he’s so inexperienced and young, serious threats will have him shaking like a leaf. To control his fear, he goes in motormouth mode, cracking various jokes, taunts and innumerable media references. He often sounds like a crazed talk show host trying to get someone to hit him.

It can get childish. For instance he never hesitated to copiously mock the Kingpin’s girth or Doctor Octopus’ haircut. Any perceptive person will quickly come to realize that he’s 15, however – although he’ll try to pretend he’s 26.

Since he’s so unsure of himself, Peter Parker is terrified that his identity will be revealed. The mere thought of having his mask removed is very disturbing to him. Unfortunately, his lack of professionalism means his identity is known to many parties, including several foes.

He also has a rather low number of Hero Points  at this point. As a result he often gets “his butt kicked all over the streets”, loses equipment, gets spotted while hiding, and so on. He’s also perpetually late at school at as a Daily Bugle intern, and runs into trouble with his aunt.

Spider-Man was at first hated by the media without any real reason, which angered and saddened him very much.

While he’s still too young, the mental and spiritual strength of Spider-Man are obviously beginning to emerge.

Likewise, his ability to become an extraordinarily dangerous fighter when he has his back deep, deep against the wall is starting to come together.

(Facing the Kingpin) “There are all kinds of things I wanted to say to you, and I was afraid I would forget to say them… and I really wanted to remember to tell you because those things are really important to me. Okay ?” [takes several cue cards from his pockets] “Here goes : You are so fat that your school yearbook photo was taken from an helicopter. No ? OK, how about that one : you are so fat that when you get on a scale it says : one at a time.” [dodges furious punch] “Wait wait, how about that one : you’re so fat you belly button makes an echo ?” [dodges again]

(Facing Dr Octopus) “Plus, I don’t mind telling you, I’ve been known to, like, jump in a fight too quickly, jumping to conclusions based on appearances and sometimes picking the wrong side of a fight. So, you see, Otto — can i call you Otto ? — this time I say to myself, I say – ‘Spidey ! Don’t just jump in blind. There are innocents in this fight. Hold back and see what’s what’. And the one time I remember to do this and you’re acting all like Denis Hopper in any of his early to mid-90s roles .”

Spider-Man is an icon. A Marvel icon, but an icon still. His Ultimate form can be ported directly into the DC Universe with few to no changes.

In fact, with his numerous crossovers with DC characters, one could assume he simply always existed there in the first place.

Parker cannot afford to carry spare web fluid cartridges on him and, usually, reaching the R# indicates the webshooters are empty. Making a new batch of fluid is a 02/02 Wealth check.

Other uses for the webshooters include actual web shields (rather rare), web “mittens” to handle dangerous objects, and cushions, nets or trampolines to catch falling objects and people. All of those are modeled using Force shield.

Rarely, Spider-Man has constructed parachutes out of webbing ; this is modeled by Gliding. Projectile weapons represent a strong squirt of web with a dry (and thus hardened) tip ; this is not used very often. Likewise, Stretching is mostly used to grab weapons and other objects out of his foes’ reach.

To restrain exceptionally powerful opponents, Spider-Man will sometimes Snare them using an entire cartridge of web fluid (thus automatically meeting the R# and having to recharge). The Snare attack is conducted normally. If it achieves positive RAPs, four more RAPs are instantly added to the existing RAPs.

For most of this period, he also wasn’t aware he had the Danger sense power.

His Artist (Photographer) skill only appears some weeks after he starts working for the Daily Buggle.

A Character with this Drawback is a teenager between 13 and 16, and thus much younger than traditional heroes/villains. This has two main effects.

First, the Character will have to contend with the limitations of not being legally and financially autonomous. He has to attend school or run into troubles, respect parental authority, cannot enter some public areas such as bars and some theaters, cannot have a driving license, etc.. He also lacks the credibility of a grown adult and risks being patronized or ignored under many circumstances. 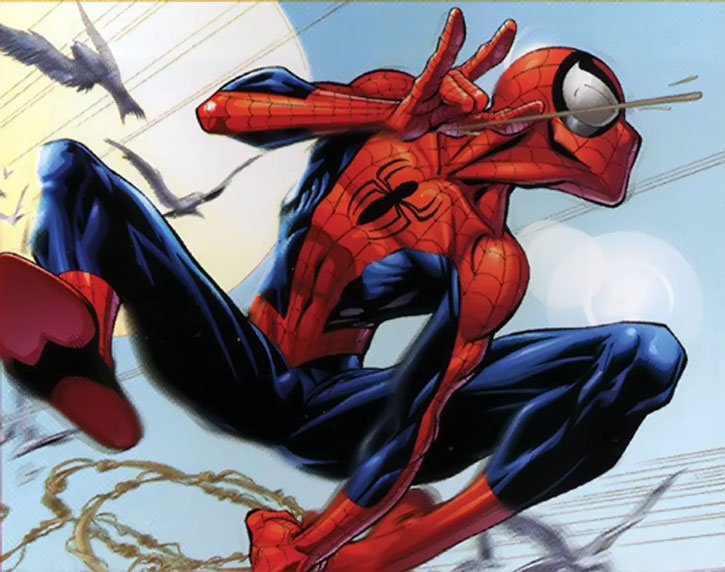 Second, the Character lacks experience. He cannot use any Skill Unskilled ; all Skills he has must be learned and detailed, and the Character will have to content himself with Skilled Use. The GM may occasionally lift this restriction when the action in question sounds like what a teenager could do.

In this case, lower the Bonus by 10 points for each half that does not actually penalize the Character.

A Character can elect to have the Age (Very Young) Drawback. This has a Bonus of 25 points, and applies for Characters that are between 9 and 12 of age. The personal limitations and lack of credibility are even stronger for this type of Character, and should be made ever-present by the GM.

The Weapon Backfire Trick Shot is a special Offensive Combat Manoeuver, often used by Characters with excellent accuracy and Initiative, such as Green Arrow or Spider-Man. The objective of this maneuver is to jam the opponent’s weapons in some way as he fires, making the weapon backfire on the user – which finds himself hoisted by his own petard.

Classic examples are an arrow down the barrel of a mook’s gun, or shooting webbing in the barrel or workings of an opponent’s weapon.

To make a Weapon Backfire Trick Shot, the Character must :

If the Character get fewer RAPs than his opponents, his attempt is a complete miss with no effects. If he gets enough RAPS, or more than enough, the opponent’s attack is aborted and he suffers an attack of his own weapon – AV being the RAPs of the Weapon Backfire Trick Shot, EV being the normal EV of the weapon.

The weapon that has suffered a successful Weapon Backfire Trick Shotis considered to have failed a R# roll.

By Bryan Gittens and Sébastien Andrivet. 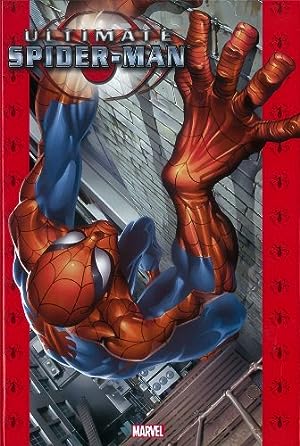 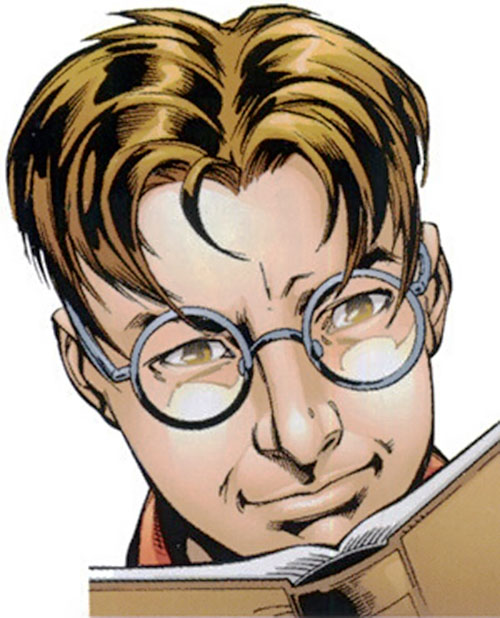 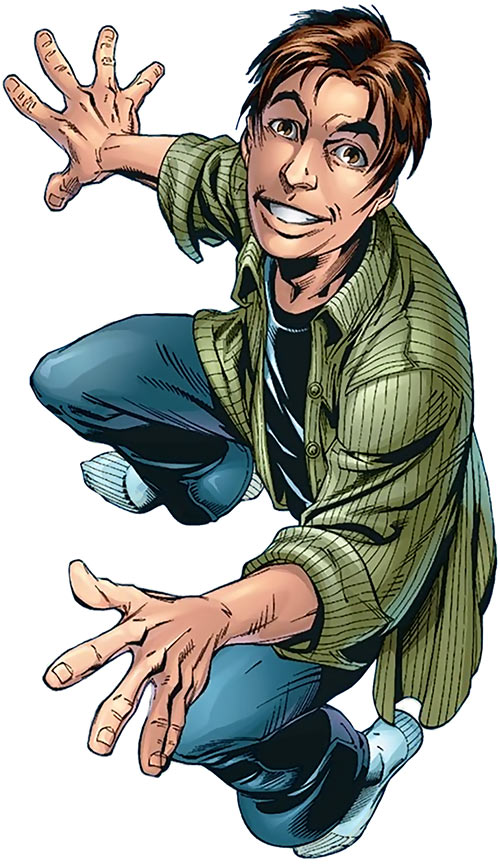 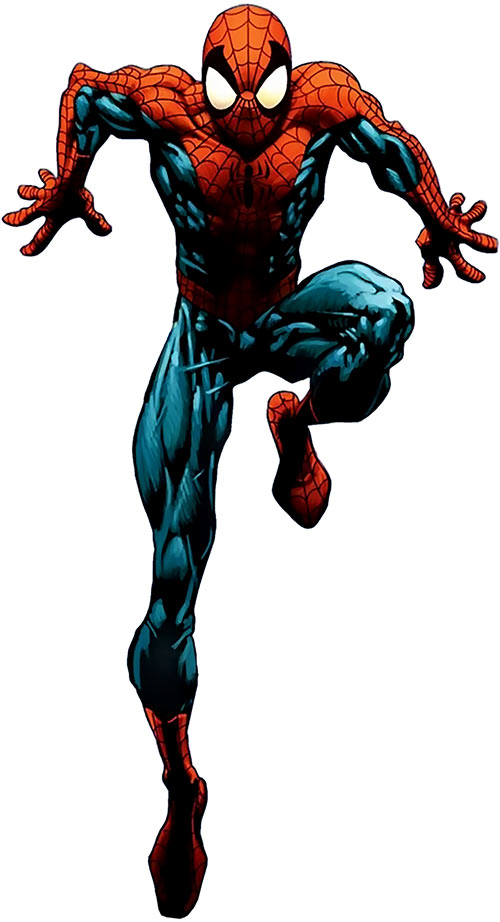 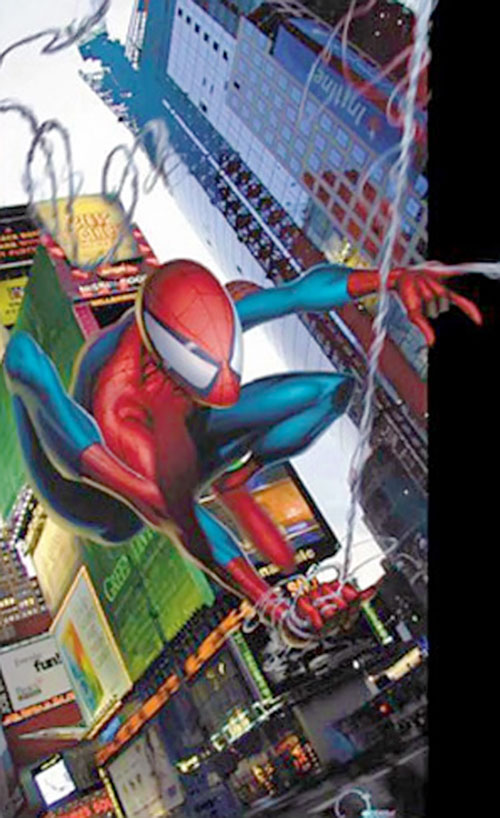