These notes are specifically about the version of Ultra-Boy who appears in the “reboot” version of the Legion of Super-Heroes, in 1994.

They were taken but a few years into this version of the Legion, so they stop before the “threeboot” took place.

Ultra Boy’s altered Rimborian physiology gives him the ability to store “ultra energy” (no relation). He may then direct that energy to a number of powers and abilities.

His only drawback is that he can direct the energy to only one set of powers at a time. 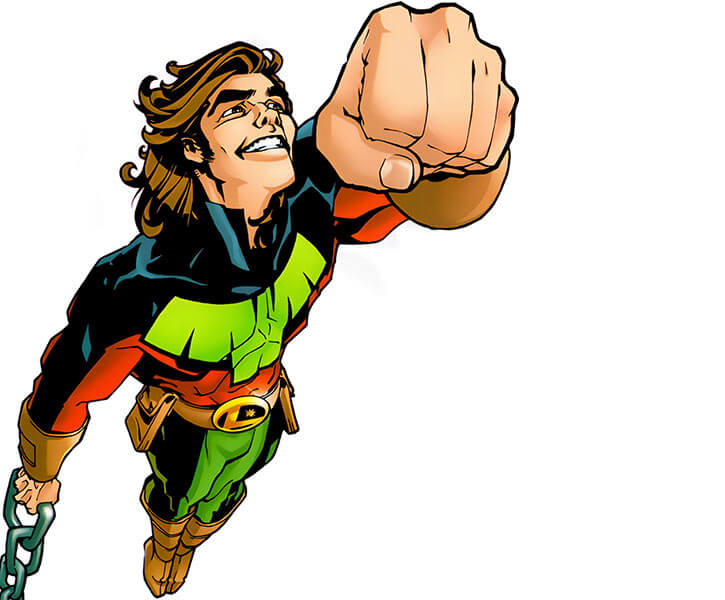 Jo Nah is a Rimborian youth. He took pride in his ability and willingness to stand up to the brutal gangs who ran almost every aspect of life on the planet.

However, he once went too far in his resistance. He only could escape from the gangsters by flying into the mouth of an immense space whale.

Jo learned to survive inside the creature’s stomach by eating its flesh. He soon discovered that this meat imbued him with the powers of super strength, speed, invulnerability, penetra-vision, flash-vision and flight.

He escaped from the creature’s innards. Nah was then contacted by Leland McCauley, who was assembling his own group of super-beings as a personal security force.

During the first weeks, he grew attached to Spider Girl, one of his fellow Workforce members. 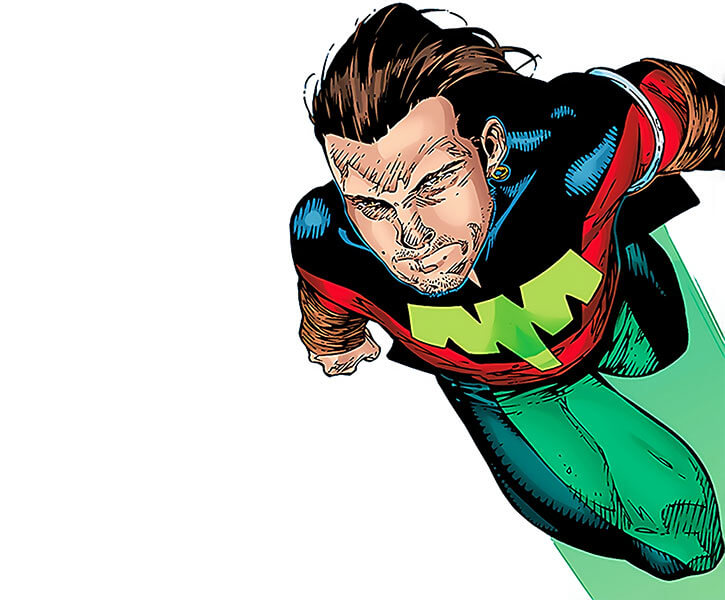 One of the first things he did was spy on the Legion of Super-Heroes to determine if any of their members could be useful to his new boss.

During this mission, he spotted Apparition. She was in a heated discussion with her mother, and Jo felt pity for her.

Ultra Boy was spotted by Saturn Girl then attacked by Spark.

That fight led to Live Wire’s departure from the Legion, and Ultra Boy convinced him to join the Workforce.

Ultra Boy, upon meeting the Legion on a Workforce mission to Planet Hell, became further attracted to Apparition. The feeling turned out to be mutual, much to Spider Girl’s dismay.

Ghost of a chance

In time, they developed a true relationship, exchanging gifts and dating. But one thing came between them… Jo’s inability — or unwillingness — to see working for McCauley as a morally reprehensible idea.

Only after they fought together against the White Triangle Daxamites were they willing to fully declare their love for one another. But it was too late, as Apparition died in that battle in Jo’s arms.

Jo felt cheated of his chance to prove himself worthy of Apparition in life. The shock and guilt of that knowledge made him resolve to do so after her death.

He severed ties with McCauley and would have joined the Legion of Super-Heroes if not for President Chu’s moratorium on new members.

Despite his inability to gain actual membership to the Legion, he has been hanging around the teram in the hopes that he can help them.

On some occasions he could do so, such as the effort to rescue Valor from the Stasis Zone.

Cosmic Boy, unable, at the time, to make him a Legionnaire, had him recruited by Live Wire to join the Legion rescue squad. This saved the Legion from the Fatal Five.

Immediately upon the arrest of President Chu and new president R.J. Brande’s relaxation of membership restrictions upon the Legion, Jo became a full-fledged member.

Jo has since found Tinya alive in some way inside of him, and now she is by his side in some ethereal way.

He and she remain that way even in the 20th century, where they were thrown by the Emerald Eye of Ekron.

They have gotten married there, proving to Tinya that she is the only woman in his life. 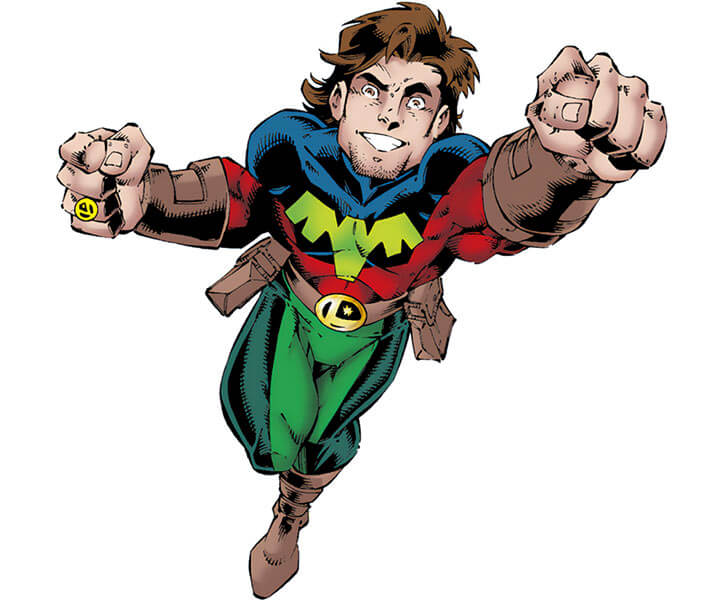 His uniform is red and green, with leather armlets and boots.

Jo has a large, green icon on the front of his uniform, resembling a bird of some sort.

Jo Nah is the resident bad boy of the Legion. A former Workforce member and Rimborian gang-banger, Jo has been involved in illegal dealings before. But he has always endeavored to be a good person, if not law-abiding.

Jo is courageous and a little hot-headed, sometimes leaping before he looks.

Apparition is a perfect foil for Jo, often providing brains to Jo’s brawn.

After her death at the hands of a Daxamite, Jo is terrified of losing Apparition. 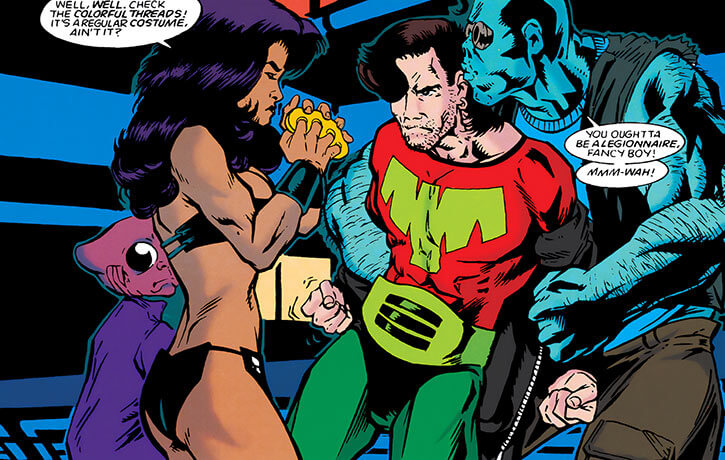 Ultra Boy can only use one group of Powers at a time. Switching between groups requires an Automatic Action. For clarification, he still only has one Dice Action per Phase. Power Groups are determined as follows:

If you prefer shuffling APs around.