Ultraman gains a new super-power every time he’s exposed to a chunk of green Kryptonite. He has demonstrated :

Ultraman seems to intuitively know which power he just gained. 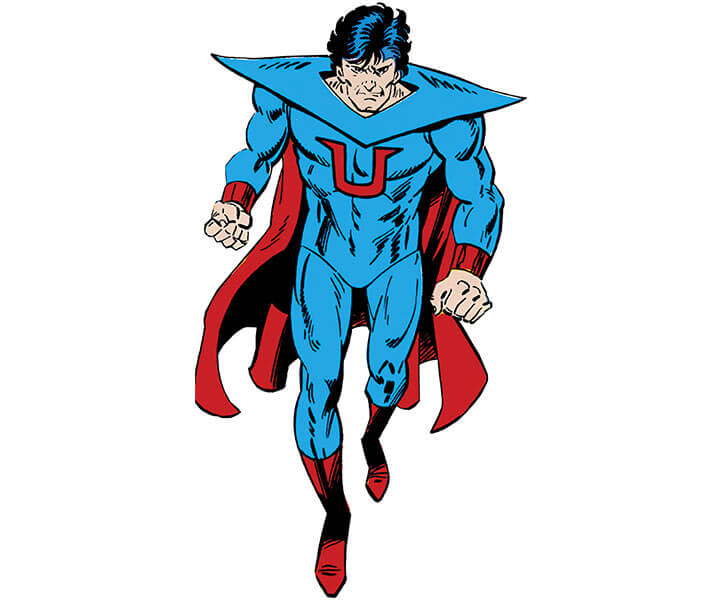 We once see Ultraman grabbing a chunk of Kryptonite that doesn’t seem to do anything. This did not seem to surprise or bother him, though. The simplest hypothesis is that it did give him a new power, but not one that would have been useful right then.

In the first encounter with the JLA and JSA, he’s exposed to Kryptonite twice. He gains — in DC Heroes RPG terms — his Remote Sensing and Heat Vision Powers, *but* he no longer demonstrates either ability in his subsequent appearances. Even though both would have been useful at various points.

He is exposed to Kryptonite radiation in each of those other two stories. But in those it only enhances his might instead of giving him new powers. So we suspect that power infusions from Kryptonite fade over time, and that brand new powers aren’t that impressive.

He also once said that he wasn’t as durable if it’s been too long since he touched Kryptonite. But given his prideful nature, this felt more like a weaksauce excuse for having been dazed by Green Lantern (Hal Jordan)’s powerful attack.

One of his remarks loosely implies that he gains less power from smaller chunks of Kryptonite. But it was too vague and indirect a statement. 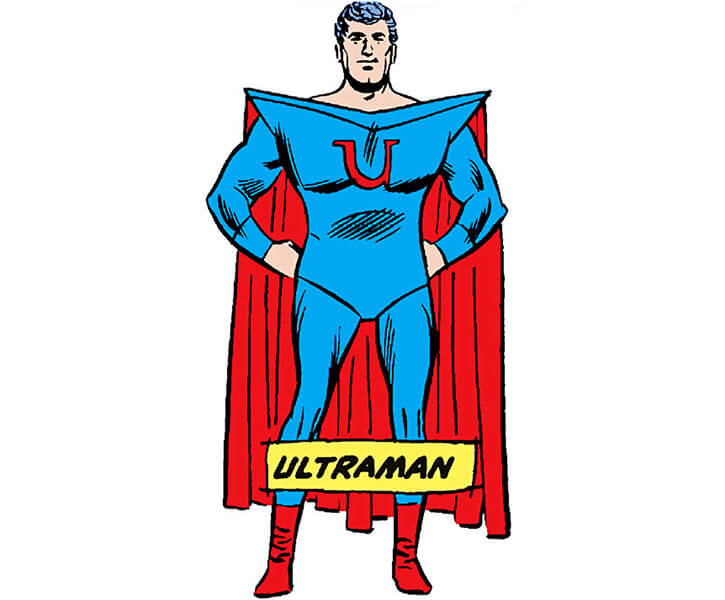 See the Syndicate’s base camp entry.

Ultraman will sometimes dye his hair black or blue-black.

His earliest costumes exaggerated his shoulder width to a silly extent, even though he already has an heroic physique. 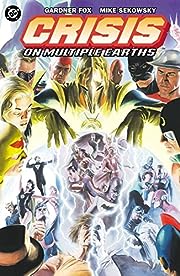 Ultraman lives for the thrill of a good fight, his pride, and for accumulating more power.

One depiction (DC Comics Presents Annual 1982) insists that he’s too dumb to wield his power. But that clearly wasn’t the case in his original material, where he was doing an okay job of it.

“You can’t hurt me with fancy words, Fate – and I’m nobody’s lackey ! As for Kryptonite – what, that’s like mother’s milk to me, see ?” 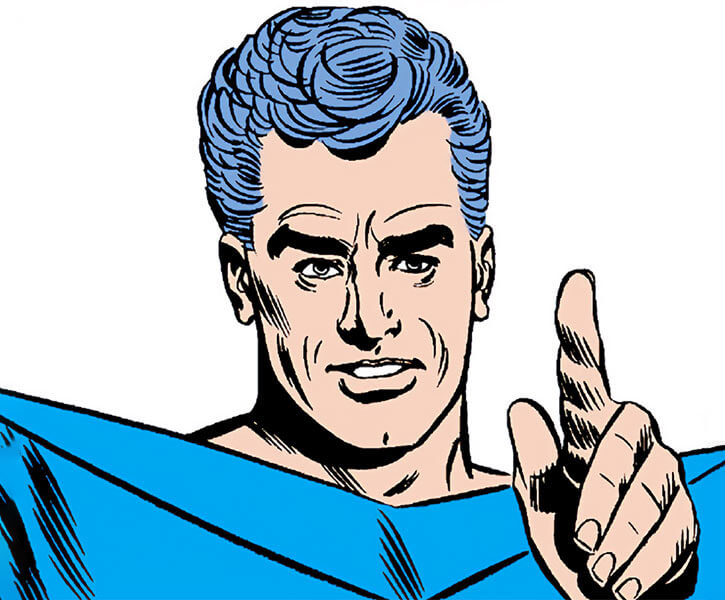 MIA toward Pride, Loss Vulnerability (if exposed to more than his own weight in Kryptonite, Ultraman will be paralysed by the excessive energy and won’t “learn” a new power). 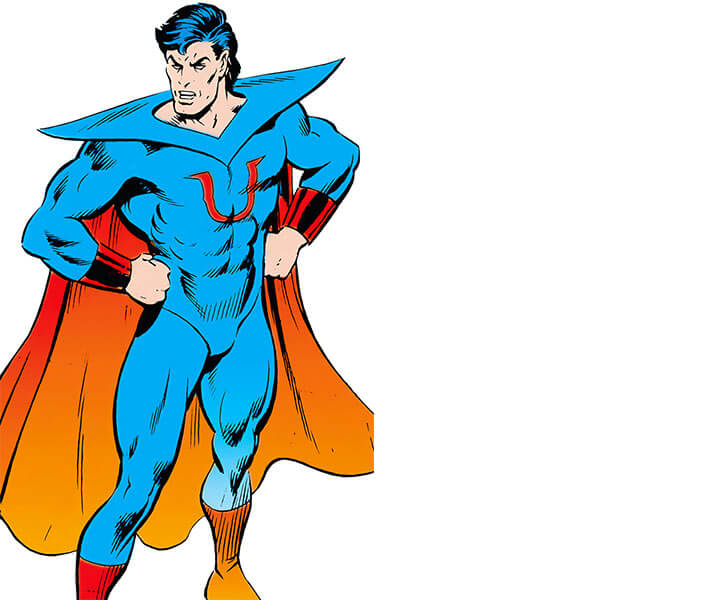 A good chunk of the stats work on the conceit that he’s Supermanlike. It’s not as clearly demonstrated as we’d prefer, but all the captions and characters assume that this is the case.

As you can see, this — as with other Syndicators — is on a post-Crisis scale. Which I increasingly forget to mention in writeups, since the Crisis was about 35 years ago as of this writing.

This entry follows the “Superman has a DEX of 10” statting convention, as discussed in the FAQ.

We don’t use Linking much. But if you do, you can consider making Super-breath Mentally Linked to emphasise its apparently telekinetic nature.

“More than his own weight in Kryptonite” is arbitrary. We don’t know what the limit is, but it’s a convenient threshold.

The power of unlimited powers

The modelling assumes that new Powers fade over time, and tend not to be *that* impressive, as discussed above.

When we first seem him touch a new sample of Kryptonite at that first size (which Ultraman notes was the largest piece of green K he’d ever seen), he absorbed 12 APs. He then channeled that into 9 APs of Remote Sensing via Omni-Power after sacrificing 3 APs to get the combined Bonus/Limitation in the stats block, through the optional rule.

All of the subsequent pieces he touched were at the smaller size (hence only getting him 6 APs). Or were so large they triggered his Miscellaneous Drawback.

In his subsequent appearances he was exposed to Kryptonite in one and absorbed a blast from a K-beam used by Lex Luthor. He channeled the RAPs in each case into his Physical Attributes, primarily STR.

The power of unlimited design notes

The Power Reserve/Omni-Power set-up is intended to cover the discrepancy between Ultraman’s Kryptonite power-ups in the first CSA storyline versus his subsequent appearances.

In the first story arc, each time Ultraman touched a particular piece of Kryptonite for the first time he would gain a new power. In his subsequent appearances, contact with Kryptonite or exposure to K-radiation (such as a K-based blast from one of Earth-1 Lex Luthor’s weapons) temporarily increased his physical vitality.

Most likely the difference was simply due to authorial oversight. But the writeup assumes that Ultraman could channel the Kryptonite radiation into either an entirely new ability or simply boost his physical attributes.

One possible No-Prize HypothesisA made-up explanation to plug a plot hole hinges on that time when, after being temporarily paralyzed in the final battle of the first CSA storyline, he came into contact with a large piece of Kryptonite. Ultraman was flooded with so many potential new powers that it overwhelmed him.

Here, we’ll hypothesise that after that incident, Ultraman taught himself to channel the surge into a simpler application. This was part or training to overcome that limitation.

Another possibility that works within the game system is that Ultraman only indulges in using the Hero Point-intensive Omni-Power when he’s facing mundane enemies or a single superhuman opponent. When facing multiple superfoes he goes with the general physical boost instead to save his HPs for the fight.

This is consistent with Ultraman’s observed appearances.