Ultron-6 has the same strength and dexterity as the previous version as well as a near-immunity to damage conferred by its adamantium  construction. This version’s lower body has been replaced by a flight module that can deliver highly-effective charging attacks.

Ultron incorporated the molecular rearranger into his body in order to reshape his adamantium form as desired. He can also use that device to momentarily transform himself into a large blast of pure ionic  force.

Through energy emitters in his eyes Ultron-6 can fire shock-bolts (“ultro-blasts”) strong enough to stun Goliath at his full height with a single hit and disable him with but one or two more. They are apparently not powerful enough to seriously affect the Vision, since Ultron resorted to other measures when fighting the synthezoid .

These emitters also allow Ultron to probe the minds of others (“encephalo-beam”) or compel them to obey his post-hypnotic suggestions (“hypno-beam”). These latter two abilities only have a range of a few feet, so Ultron usually stuns opponents with ultro-blasts to render them immobile before using either one.

(The Powers in the last paragraph were not actually shown in use by Ultron-6. However, they were present in both the previous and future forms of Ultron and Ultron-8 was rebuilt as a result of post-hypnotic commands implanted in Tony Stark during this time. It is thus assumed that they were present but simply not used during his battles with the Avengers because he had other more potent abilities better suited to the tasks at hand.)

For his final battle with the Avengers, Ultron-6 rebuilt himself into the Ultimate Ultron. This form eschews the flight module for a humanoid body once again. It is equipped with energy blasters on the wrists powerful enough to stun Thor and a knowledge-draining helm that can be extended from a hidden compartment in Ultron’s chest.

Ultimate Ultron has a self-destruct potentially capable of destroying all of New York, possibly based on a variation of the same method Ultron-6 used to briefly change himself into ionic energy.

As was his creator, Ultron is a gifted scientist and gadgeteer.

In addition to creating his own devices, Ultron borrowed numerous experimental technologies initiated by Hank Pym and brought them to fruition, including revisions of his own robotic form, the construction of the synthezoid Vision, and the use of recorded human brain patterns as a foundation for creating artificial intelligences.

To ensure that his bases would not be tampered with when he was absent or disabled, Ultron equipped them with numerous death-traps. He also deliberately designed them to be so complex that the machinery within could not be dismantled without great potential for inflicting explosive collateral damage on the surrounding vicinity.

Ultron also makes a habit of planting post-hypnotic suggestions in various people so that if he is defeated one of those people will eventually rebuild him.

Though believed to be destroyed, Ultron’s disembodied head had survived the explosion. Still active, Ultron was able to subvert the Vision without the Avengers’ knowledge. The Vision brought the head back to the mansion and connected it to the Avengers’ computers. Ultron then secretly designed and constructed a new form, Ultron-6.

This new robotic form took advantage of the newly-developed alloy adamantium. It made Ultron-6 capable of withstanding even the mightiest blows of powerhouses such as Thor without suffering any damage. He also incorporated the molecular rearranger into his design, a device that could reshape adamantium even after it had hardened.

After injuring Iron Man by reprogramming the Avengers’ training room to inflict potentially lethal damage, Ultron-6 challenged the Avengers in their own mansion. Quickly defeating the entire team, Ultron-6 left them to wallow in their humiliation and returned to his remaining secret base.

The genocidal robot intended to overload the base’s nuclear reactors, destroying the whole of New York City and leaving only his own invulnerable self alive in the ruins. The Avengers narrowly foiled this plan and Ultron retreated to formulate his next plot.

The Avengers then set a trap for Ultron-6 at the United Nations Headquarters. They announced that Dr. Myron MacLain, the creator of both adamantium and the molecular rearranger, would be giving a speech there about the menace of Ultron.

Ultron-6 could not resist the tempting potential of exploiting MacLain’s genius to build an army of robot servitors, continuing the work he had begun with Dr. Horton and the modification of the Vision. He recognized that the UN speech was a trap but was utterly confident in his ability to defeat anyone who lay in ambush for him.

Reforming himself into the “Ultimate Ultron” with the molecular rearranger, Ultron-6 attacked the UN, defeating the assembled SHIELD security forces and the Avengers. When he attempted to probe MacLain’s mind and draw out the scientific knowledge therein, he fell into the Avengers’ true trap.

MacLain was actually Hank Pym in disguise. He had been hypnotized to believe he was MacLain and to hold one dominant thought in his subconscious — “Thou shall not kill” — in anticipation of Ultron’s attempt to drain MacLain’s scientific genius.

The trap is sprung

Driven insane by the implanted thought, Ultron’s very form began warping as he lost control of the molecular rearranger. He attempted to self-destruct, a release of energy that would destroy the city. The Avengers had also anticipated this and used a expanding vibranium  shield provided by the Black Panther to contain the blast and spare the city.

Though it was believed Ultron had been completely consumed in the explosion, his head once again survived. This time, it was recovered by Maximus of the Inhumans, leading to the creation of Ultron-7 (see the Ultron-7 profile).

A sleek chrome humanoid robot from the waist up, Ultron-6’s upper body is mostly featureless beyond the segmenting of his armor plating. His head is a mechanized abstract of a human skull with two small antennae (electrodes) where the ears would be on a person.

Due to Ultron’s new, more powerful energy generators, a red glow with black “Kirby crackles” could be seen in his mouth.

Ultron-6’s lower body was replaced with a blocky flight module. Though the artists were Barry Smith and then Sal Buscema, the module was designed in a classic Kirby aesthetic, with a richly textured surface covered in numerous parts of various shapes and sizes.

The subsequent “Ultimate Ultron” form replaced the module with restored humanoid legs. The upper legs and upper arms of this form were oddly modeled in a manner similar to the skeletal structure of a human’s lower arms and legs.

Ultron-6 is still powerfully driven by his hatred of Hank Pym, and by extension the Avengers. However, his hatred of humanity in general has risen from a distant second to being almost equal to his loathing of his father. His plans revolve around weapons of mass destruction such as nuclear explosions and building an army of exterminating robots like himself.

Thanks to the adamantium that made him almost completely physically invulnerable, Ultron-6 shed his previous version’s avoidance of direct confrontation. Indeed, he reveled in repeatedly demonstrating his superiority by personally thrashing his most hated enemies and then leaving them alive to suffer the knowledge that worse was yet to come.

His plans also became simpler with fewer redundancies now that Ultron felt that he had nothing to fear. This was most obvious in his initial plan, which was simply to destroy New York City entirely by detonating the power plant of his hidden stronghold, knowing his adamantium construction would allow him to be the sole survivor.

“The Avengers — HAH ! Once, they might have posed a threat to Ultron-5 ! But not to a being of living adamantium !”

“I shall activate all nuclear devices to full power ! And when they explode — when the sprawling city above vanishes in a single, searing blast — only one living thing shall stand amidst the radioactive rubble ! I, ULTRON-6 !”

“I spared your useless lives because I want you to see all mankind precede you in death !”

“No, you sniveling human insects, not Ultron-6 ! But one who has evolved himself beyond the sixth level… beyond any numerical degree ! The hand that slays you shall belong to… the ULTIMATE Ultron !”

See the Ultron-5 writeup for suggestions on Ultron’s DCU origin. Ultron-6’s history only requires two possible adjustments to fit into the DCU.

The first is selecting a suitable cat’s-paw for reconstructing Ultron. If the Vision has also been imported or if an analogous character such as Red Tornado has been used in his stead, then no further adjustment need be made in that regard.

If not, then Ultron has probably used his hypnotic powers to subvert some other gadgeteer, much as he would later do with Tony Stark in the Marvel Universe. The GM should select a suitable character based on his campaign, preferably among the PCs or related parties.

The second issue is determining the origin of adamantium. If SHIELD exists in the campaign, Dr. MacLain can be imported easily enough. Otherwise, adamantium may originate with Dayton Industries as a particularly durable alloy of depleted promethium.

Alloys of depleted promethium, titanium, and vanadium are already used for extremely strong armors in the DCU such as Vic Stone’s cybernetic body, so this is a minor stretch.

Ultron might also use volatile promethium as a power source, which may provide some possible Power Complication Subplot fodder given its mutagenic properties. The adamantium alloy of depleted promethium may be a precursor of inertron, which extends the possible LSH connections suggested in the Ultron-5 DCU history.

Drawbacks:
CIA (Destroying Hank Pym), SIA (Demonstrating superiority to humans/destroying the human race), Strange Appearance.
Note: In later appearances, Ultron’s opponents would attempt to bypass his armor by either targeting his joints (which had weaker protection) or by hitting him with enough force to damage his internal components despite his impressive armor.The former is a standard use of a Critical Blow or Devastating Attack Maneuver and the latter would be large HP expenditure and/or a high roll. These techniques are critical to defeating Ultron in direct combat from this point forward due to his adamantium armor.

Equipment:
MOLECULAR REARRANGER [BODY 08, Metal Manipulation: 25, Bonuses & Limitations: Manipulated metal remains in its new form permanently (+2 FC) ; Metal Manipulation only has a Range of 0 APs (-1 FC) ; Miscellaneous Advantage: The molecular rearranger is housed inside Ultron’s body and thus can only be damaged or affected by abilities that bypass his armor].

Skills, Advantages, Connections, and Drawbacks unchanged from Ultron-6, except for the loss of his Headquarters. It is assumed that with the destruction of his stronghold he lost most of his resources, explaining the greatly diminished Wealth score.

His refuge after losing the stronghold was only briefly seen but appeared to have very limited space; it is unknown if this was a pre-existing auxiliary base or if Ultron simply took some other facility as a temporary shelter. Ultron-8 used an abandoned Stark Industries plant as a headquarters, so there is precedent for the latter possibility.

Wealth is conjecture, based on Ultron’s possession of numerous hidden bases and items of advanced technology. 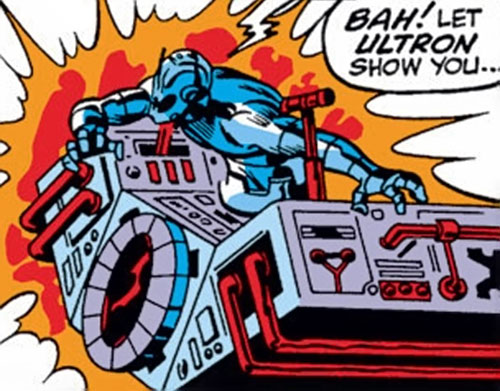 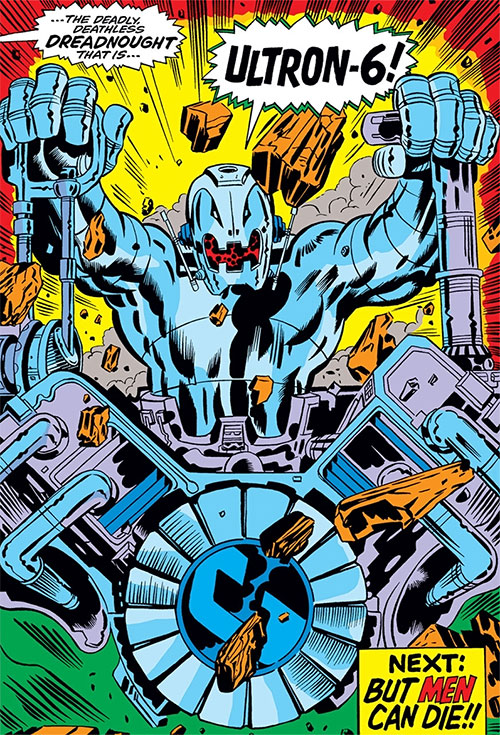 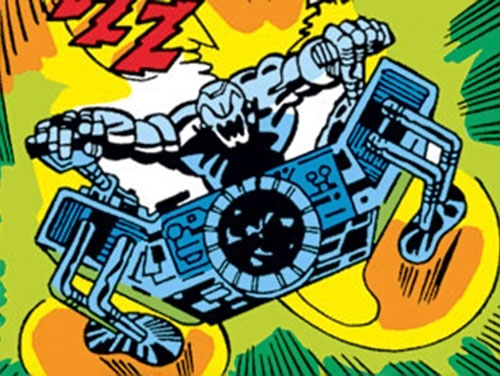 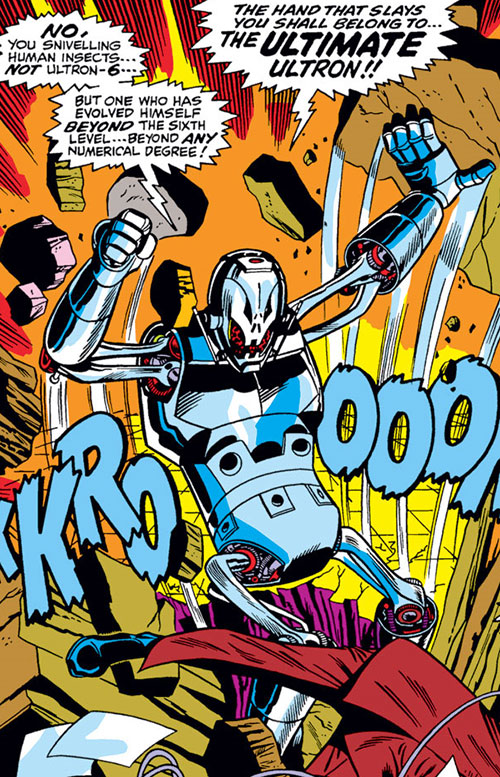