Ultron-7 possesses the genius of prior Ultrons married to the might of the Omega android, which feeds on rage directed toward the Alpha Primitives of Attilan. The energy derived from this psychic tension is now channeled not only into increasing Omega’s size but also into boosting Ultron’s powers of mental manipulation.

Unlike Omega, Ultron-7 will not shut down if that aggression is no longer present. Furthermore, Ultron-7 does not need to be directly attacked to gain energy. So long as the Inhumans and Alpha Primitives are fighting he becomes stronger and remains at that increased might even if they cease battle.

Ultron-7’s hypnotic powers are noticeably stronger than in his previous incarnations. He was able to use them at a considerable distance to simultaneously “reprogram” Iron Man and Medusa to kill as many Alpha Primitives as possible and then lose consciousness once subdued by their allies.

He can now mentally paralyze numerous people or subject them to lethal psychic attacks. When his Omega body was fully enhanced, Ultron-7 was easily capable of simultaneously subjecting the combined numbers of the Inhumans, the Avengers, and the Fantastic Four to either of the latter mental powers.

The only thing that prevented him from killing all of the assembled helpless heroes by draining their minds was the deus ex machina of Franklin Richard’s incredible powers.

Despite his earlier mischief with the Omega android, Black Bolt still allowed Maximus the Mad to continue his seemingly pointless experiments.

While Maximus was studying the world outside of Attilan via instruments that allowed remote viewing he discovered Ultron-6’s head. It had survived the destruction of Ultron-6’s body and lay undiscovered among the wreckage.

Maximus used his devices to transport Ultron-6’s head to his lab and then contrived to attach it the Omega android, creating Ultron-7. As soon as he regained consciousness, Ultron-7 repaid Maximus by blasting him unconscious.

He then resumed Omega’s old station, standing immobile as a public statue with a mask over his head to disguise the fact that he was no longer Omega, and pursued his own agenda.

The Avengers and the Fantastic Four had just arrived in Attilan to witness the marriage of Quicksilver and Crystal. To further empower his Omega android body, Ultron-7 used his hypnotic abilities to send various Inhumans and Avengers on rampages against the Alpha Primitives. He then kidnapped Crystal to further exacerbate tensions between the Alpha Primitives and the Inhumans and their allies.

With the Inhumans and Alpha Primitives fighting again Ultron-7 dropped his pretense of being immobilized. At this point, it simply seemed that these spontaneous outbreaks of disorder had roused Omega again.

As the fighting progressed, Ultron-7 grew more powerful until he was able to mentally paralyze all of the Inhumans, Avengers, and the Fantastic Four. He then revealed himself and gloated over his victory, even releasing the paralysis for a while to allow the heroes to make futile attacks against him.

Tiring of the game, Ultron-7 then unleashed his mental powers anew, intending to destroy the heroes’ minds and leave them permanently insane. The fallout of this attack awakened the comatose Franklin Richards, who instinctively responded with his incredible nascent mental powers by blowing Ultron-7’s head off.

With Ultron-7 defeated, the heroes now had two celebrations, one for Franklin’s emergence from his comatose state and one for the wedding of Quicksilver and Crystal.

While Ultron had duplicates of each of his prior stages constructed during his reign over Slorenia, that version of Ultron-7 was simply a standard-pattern Ultron upscaled to the Omega android’s size. It did not have the unique abilities of the original Ultron-7.

Initially, Ultron-7 looked exactly like Omega. He was a giant white male with elongated incisors wearing a red body suit with a cowl, accessorized with blue trunks, mid-length gloves, and boots. The cowl has a blue domino-mask pattern over Omega’s eyes and a golden yellow omega symbol is emblazoned upon his chest.

After pulling off his mask, Ultron-7 revealed his usual head. It still was a mechanized abstract of a human skull with two small antennae (electrodes) where the ears would be on a person and a red glow with black “Kirby crackles” in his mouth. 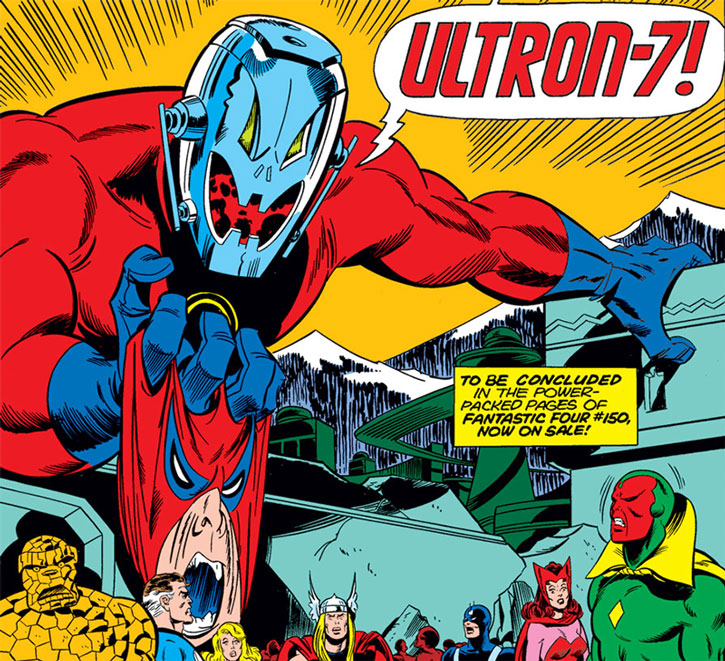 Ultron-7’s behavior remains much as it did before. He prefers indirect schemes to build up an advantage over others, but cannot help ending his charades early in order to gloat over those he is defeating.

He delights in crushing resistance and takes an arrogant joy in reminding his enemies that they cannot match his power.

Maximus: “With you as my ally—”
(Ultron-7 blasts Maximus unconscious)
Ultron-7: “—You need no enemies, fool !”

(Taunting the paralyzed Vision as he removes his Omega disguise) “Ah, you *recognize* me, do you, android ? You realize, finally, in whose plot you have become enmeshed ! Of course, you cannot answer, but the chilling gleam in your eyes gives an equally emphatic response !”

“I will punish you for what you have done to me in the past by dissolving your pathetic brains from within ! Think of the irony: The World’s greatest heroes gathered together for an occasion of joy — only to have that joy turned to horror — and the horror to madness — and defeat !”

This will largely depend on what sort of origin Omega has in your campaign. However that origin left Omega indisposed will likely determine what mad scientist combines Ultron and Omega into Ultron-7.

Connections:
None — even the Alpha Primitives that he exploited were only pawns. 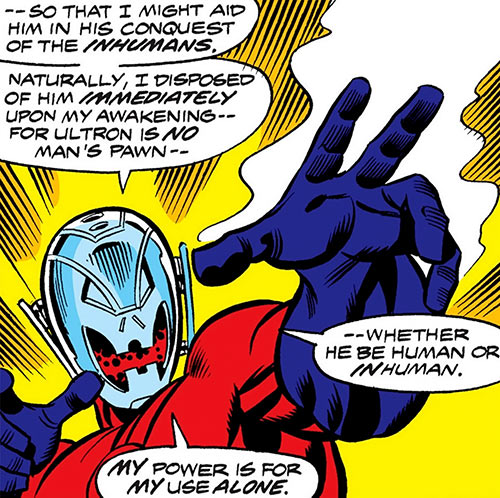 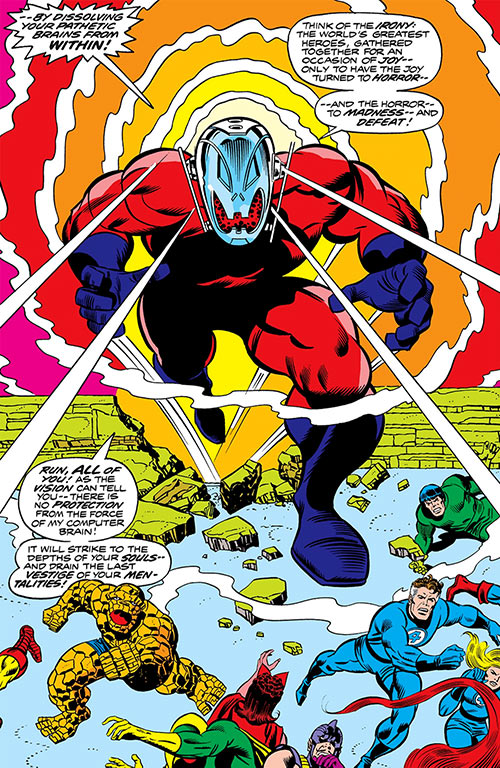