Underworld takes place in an area looking much like Budapest – but with a strong Gothic punk feeling and constant raining.

This depressed region is torn nightly by brutal conflict between two races – each carrying a virus turning them into a monster. The vampire covens are rich aristocrats but are getting decadent. The lycan clans, werewolves all, are brutal street fighters.

Both factions are ruthless and sinister ; both operate at night. Although they both maintain a veil of secrecy around their activities, by the time of the movie the werewolves start getting careless as they prepare for the final fight between the two nocturnal folks.

Originally, the vampires were the dominant species. They kept the lycans as slaves to protect them during daylight. Lucian, one of the slaves, became the lover of the vampire Sonja, the daughter of the vampire lord Viktor.

Viktor was so incensed — both to see a slave dally with his daughter, and at the possibility for the unholy mixing of races — that he had his daughter burned at the stake by sunlight before Lucian’s eyes.

Lucian turned in his wolf form and escaped, rallying the lycan slaves and starting the war. Lucian was reportedly killed by a vampire named Kraven during the late Middle Ages. From then on the lycans slowly lost the advantage as they were getting beaten back.

When Underworld starts, the conclusion of the war is believed by most vampires to be close at hand.

Selene is a vampire, and an experienced “death dealer” – basically a hitwoman running alone or with a team of colleagues. She is highly skilled in urban combat and small arms, and quite resourceful in difficult tactical situations. She has proven able to take down heavily armed parties of lycans without a scratch.

Selene is quite observant, level-headed and has good deductive abilities, as well as an excellent visual memory. 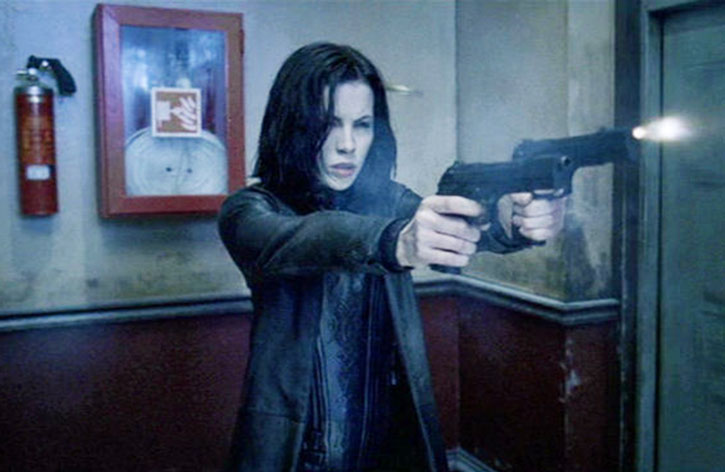 As a vampire she is superstrong and can move with great swiftness. She can also extrude teeth and claws, and even use the latter to stick to walls and ceilings. She also seems to recover from wounds faster than humans. She must operate at night, though – the sunlight’s UV rays are deadly to her kind.

As a vampire she must feed from human blood, but in game terms that’s not really different from normal human needs for sustenance.

Selene was a girl living on a farm with her extended family when the place was attacked by monsters. Everyone on the farm, as well as a part of the livestock, were slaughtered.

The girl’s death was seemingly prevented by the arrival of Viktor, an ancient and powerful vampire lord. He turned the girl into a vampire so she could avenge her family while serving his clan. She became a “death dealer” – a vampire assassin and special operative.

Although those events are not precisely dated, they may have happened as far back as the Dark Ages. 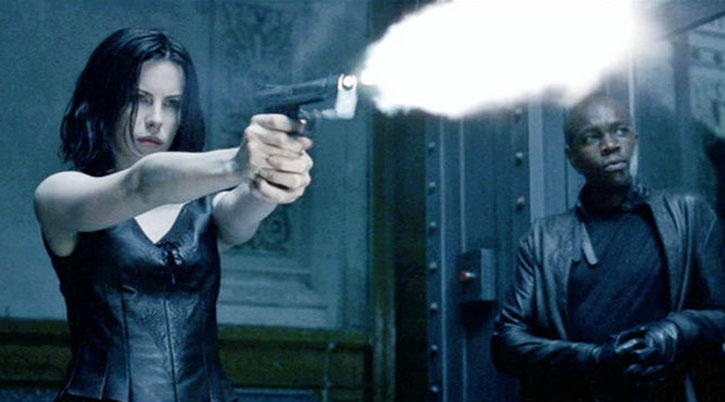 Selene was fiercely loyal to her lord, who loved her as his daughter. But Viktor went into a kind of torpor . The three ancient leaders of the coven would alternate. One would be active and rule while the other two would rest in stone sarcophagi so they would prolong their unlife.

At the beginning of the movie the second ancient, Amelia, had been on a foreign embassy for years and the third ancient, Markus, was also in torpor.

In the interim the regent was an old vampire named Kraven. His ways were not as warlike as Viktor’s. Selene hated Kraven for, in a way, taking Viktor away from her – and for pushing the coven into what she perceived as decadence. Kraven’s attraction toward Selene and his insistence she be absolutely obedient to him also went poorly.

A plague on their houses

During an ambush against a party of lycans, Selene noticed they seemed to be trailing an human, a medical intern named Michael Corvin. The vampires’ strike allowed Corvin to escape the lycans.

However, Selene also discovered that the lycans’ guns where shooting sophisticated bullets. These had been filled with a special irradiated fluid that was the equivalent for vampire to liquid sunlight.

As she investigated, Selene encountered a man whom she thought was Lucian – the ancient and supposedly dead lycan leader. Now certain that Lucian was still alive, she became convinced that Lucian and Kraven had entered some form of pact centuries ago. Assuming that the survival of the entire coven was at stake, Selene broke every rule and awoke Viktor out of turn.

Selene’s blood was potent enough to wake her lord up and transmit to him a fuzzy, hazy version of her memories. But it was not potent enough for the memories to be so clear as to give Viktor the certainty that Lucian was still alive. 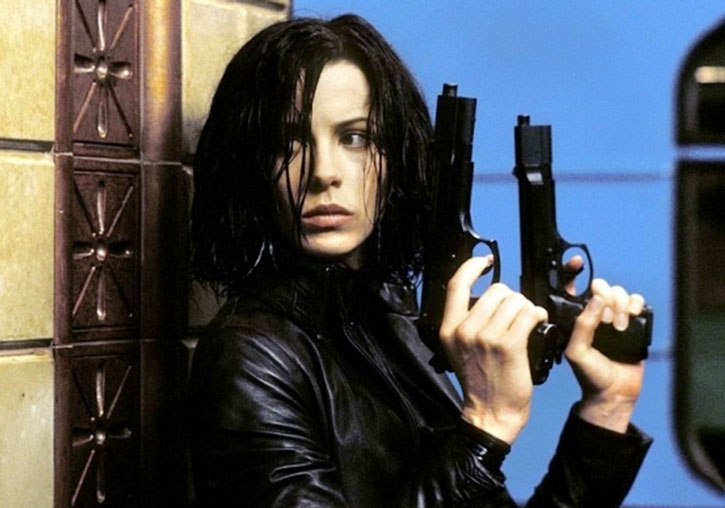 Selene also located Corvin. She helped him escape from the lycans once more – but he was bitten by Lucian. Corvin unexpectedly survived the bite, which meant he would soon turn into a feral lycan, hunting and killing for sustenance.

Meanwhile Corvin’s flesh and blood where analyzed by Lucian’s senior scientist. They confirmed that the intern was the man they had been looking for for a long time : a descendant of the legendary fifth century warrior Corvinus. The Black Plague had somehow mutated inside Corvinus and let him not only survive, but become an immortal.

Out of Corvinus’ three children:

Michael Corvin was a descendant of the last child, and carried the original mutation of the virus.

Selene left Corvin at a safe house, but was obviously attracted to him and even shared a brief kiss with him. This was a strongly taboo gesture as he was a lycan, and hours away from his first transformation.

Meanwhile, Viktor ordered Selene to be arrested – the law was the law, and waking up an ancient out of turn was unthinkable. Furthermore, as it turned out there were but a few days left before the third ancient Markus was to be awakened. At this point Amelia would come back from her embassy and go into a torpor.

Important dignitaries from the vampire coven Amelia was liaising with would accompany her, compounding the harassment resulting from Selene’s decision.

Yet Selene was right. Lucian was indeed alive, and Kraven was a traitor in league with the lycans. Kraven had a large party of lycans storm the train carrying Amelia and the nobles, and kill everyone.

Erika, a vampire from Viktor’s coven, then helped Selene escape. But the goal was to make Selene look guilty, as Erika was jealous and wanted her out of the way to become Kraven’s queen.

This backfired. Selene captured the lycan scientist and proved to Viktor that her accusations were correct. However, Kraven fled. 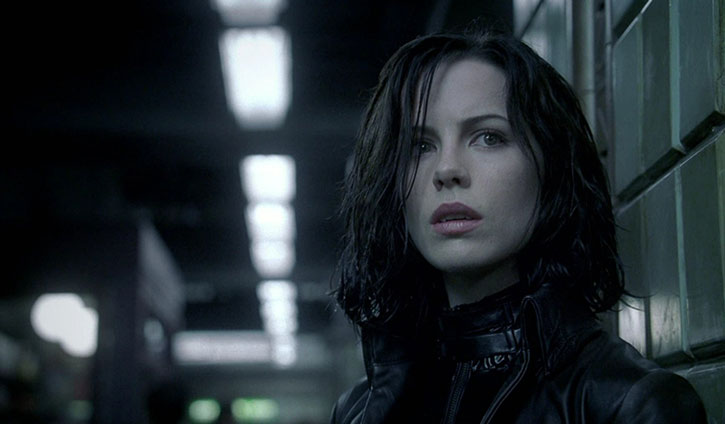 Mixing the blood taken from Corvin with the blood of the slain Amelia would allow the lycans to produce a powerful abomination capable of slaying the vampires. However, Viktor’s more immediate concern was the attraction between Selene and Michael Corvin.

Viktor saw Selene as his daughter, and he was revolted at the notion than another daughter of his would love a lycan. He ordered Selene to kill Corvin.

All forces clashed in a massive fight in the lycan headquarters. During the battle Kraven told Selene that it was Viktor who had killed her family. He had spared her because she reminded the vampire lord of Sonja.

Kraven slew Lucian and fatally wounded Corvin. But Lucian’s last words were to tell Selene to bite Corvin and let him live as an hybrid. Shocked by Kraven’s revelation and wanting to save Corvin at any cost, she bit the intern against all taboos.

As Selene and Corvin left the scene of the carnage, Markus was awakening (possibly from lycan blood, which might mean another abomination). A new era of rage was opening for the covens and tribes. Two ancients had been killed, one by Selene’s own hand, the abomination had been created and the renegade vampire regent Kraven was loose.

Selene wears heavy motorcycle black leather boots, and a Emma Peel-style black latex catsuit. The torso of the suit is styled to look a bit like a corset. Since this is latex, the costume is particularly flattering for her already exceptional figure. When outside (and thus in the rain), she wears a large black leather trenchcoat.

Selene has unusually large hands and long fingers for a woman of her size, and can thus easily handle firearms.

Selene is a lost warrior. Her whole life is dedicated to killing and battle, and when the war ebbed she founds herself useless.

Her job is her whole life. She thus resents Kraven for helping make the death dealers obsolete weapons, and for allowing the debauché, libertine side of the vampire culture to push the has-been fighters and assassins back into the shadows.

She feels much more empathy for her fellow death dealers, or even the foot soldiers or the armourer, than for any of the courtesans at the coven’s mansion. 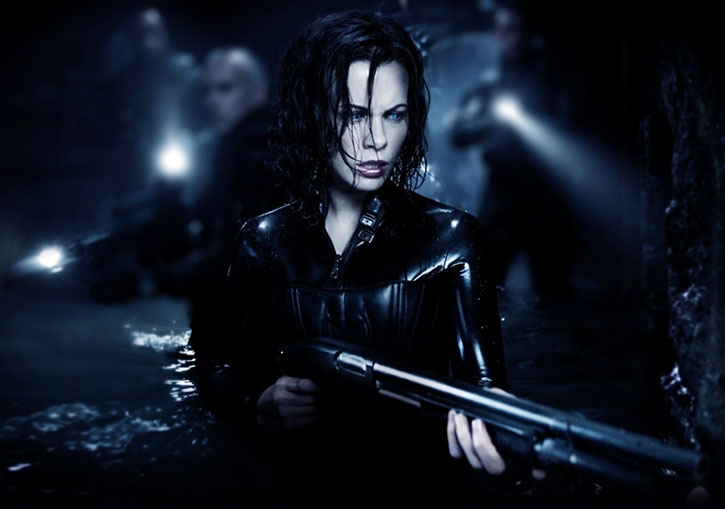 Selene is asocial, sullen, and seems closed in a somewhat adolescent way. She strongly dislikes the superficiality of vampire social life, does not talk much and seems wary about her own emotions.

She seems to be in conflict with her own humanity, trying to deny it as she is now a vampire and ending up conflicted and tormented. Her encounter with Michael opened the floodgates to her feelings, with dramatic consequences.

Selene usually stays sullen, private and aloof. Unlike the vast majority of black-clad gunfighters with a trenchcoat she doesn’t do any macho swagger. When she speaks, she tends to be articulate and eloquent, although obviously reserved.

She has an immense respect for Viktor and the old, warlike ways of her “father” – at least before she learns the truth.

“I am a Death Dealer, sworn to destroy those known as the lycans. Our war has waged for centuries, unseen by human eyes.”

“As far as I’m concerned, this is still Viktor’s house.”

We have assumed that the vampires used their claws to stick to walls and ceilings – even though, when Erika does it, her hands seem normal. We’ll assume it was an oversight from the movie-makers.

The movie takes place in an unspecified Eastern European country, but since it’s clearly shot in Budapest we’ll assume that everybody was speaking Hungarian. Nem probléma.

– Light Pistol ● Cost 7 (Feature: one extra pistol) — Walther P99 or H&K USP.
– Submachinegun ● Cost 13 (Feature: one extra gun) — Modified Beretta 92F.
– Special shuriken — Ranged Damage 2, Feature: Cannot be rejected by regenerative healing, must be manually removed ● Cost 5.
– Silver nitrate bullets — Ranged Poison Damage 6 (resisted by Fortitude +0, Linked with Damage from a suitable firearm) ● 12 points (this also prevents Lycans from shapechanging, but this is a Complication for them rather than a property of the bullets).
– Maserati 3200 GT — as police cruiser ● 11 points. 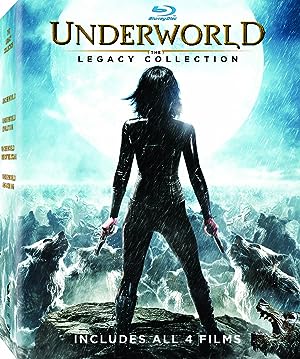 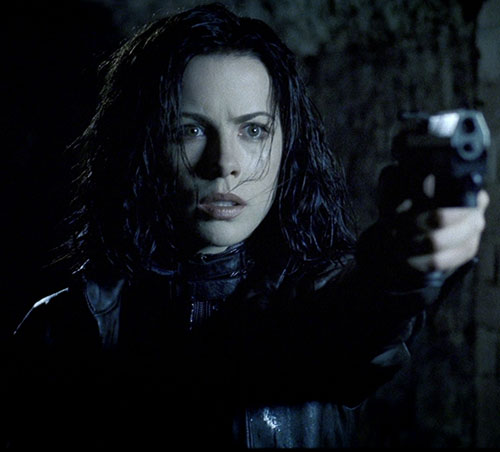 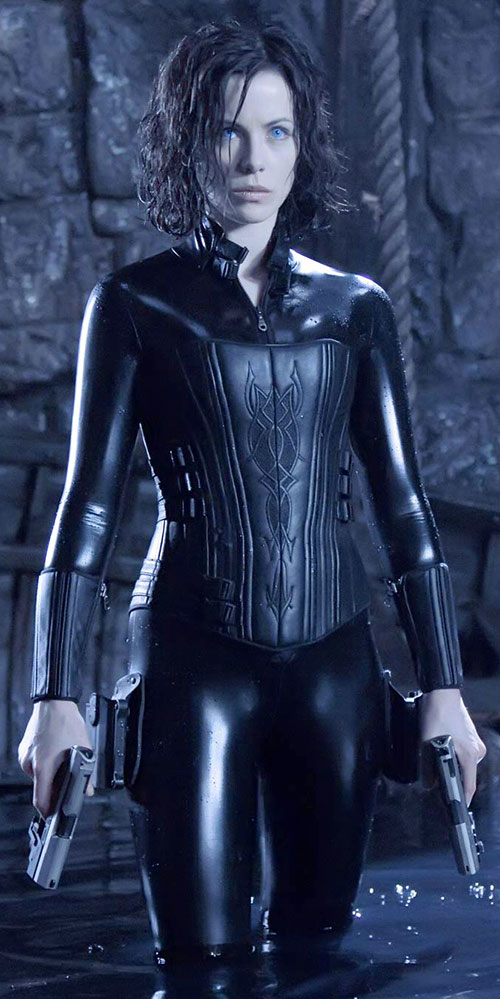 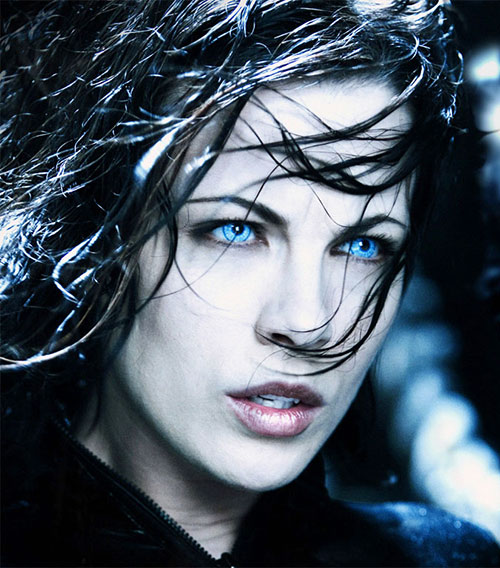 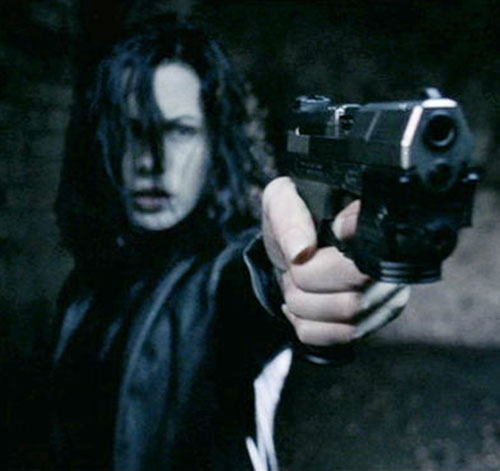 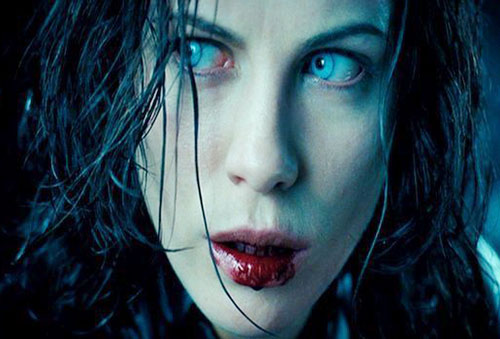 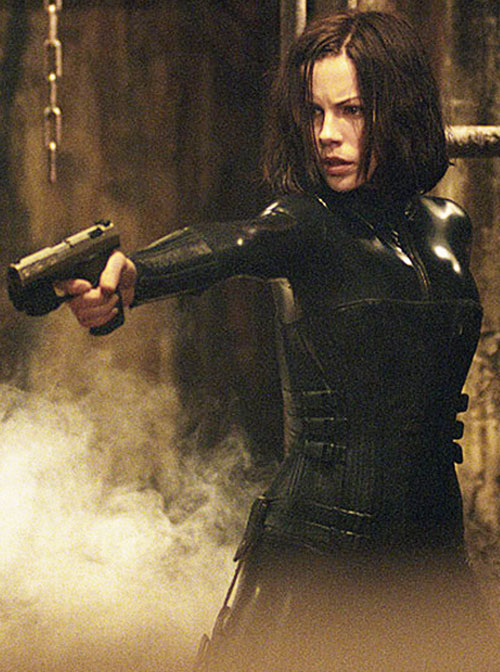 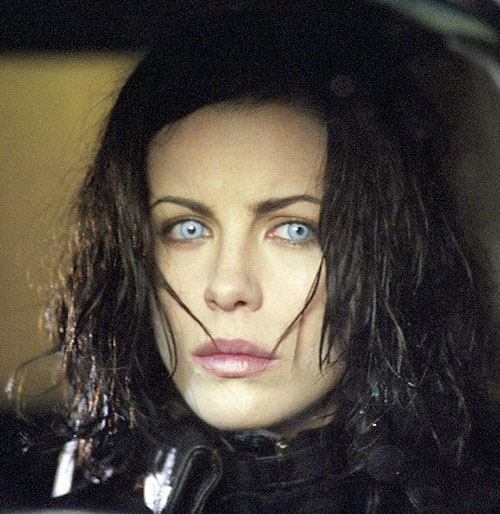 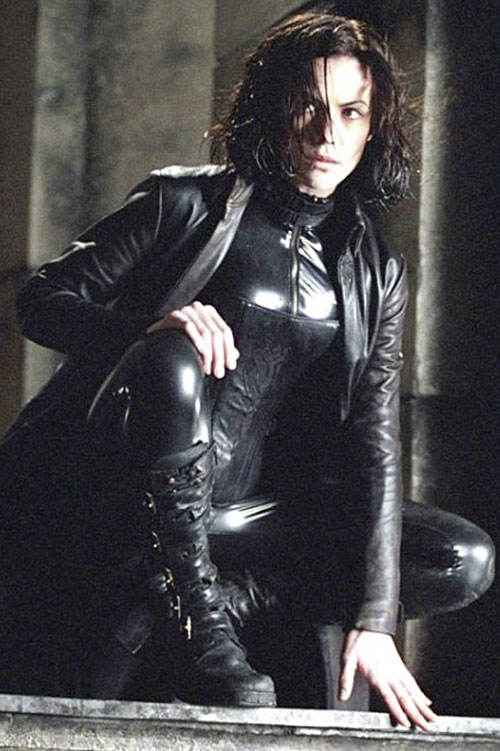 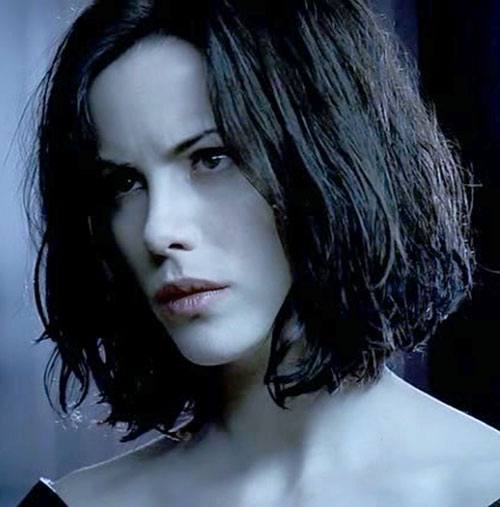 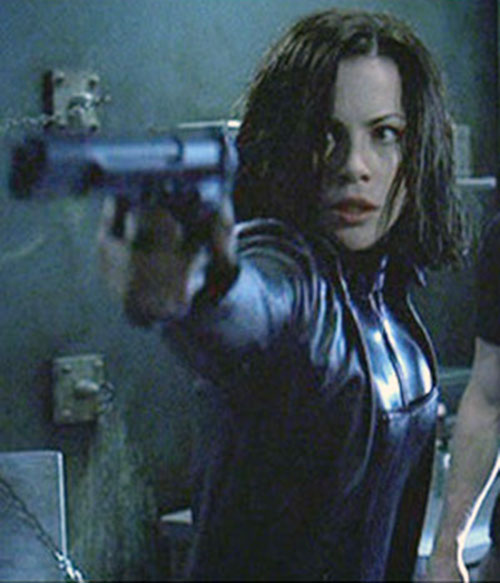 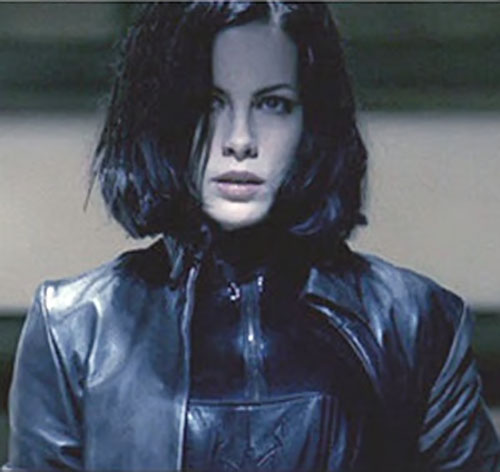 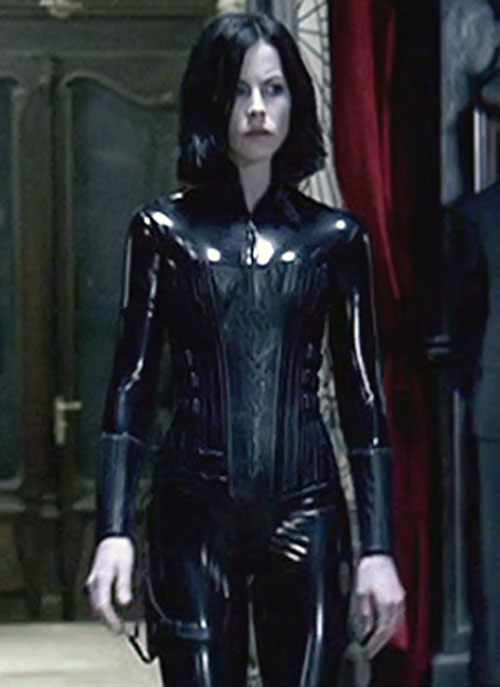 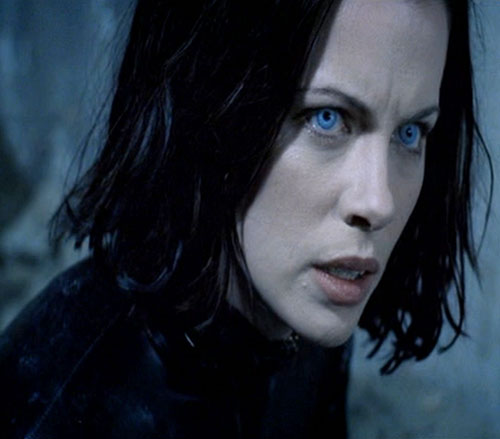