The Unicorn technology was quite powerful and versatile even from day one. Attack modes include :

His jet boots are also powerful. Yet, they are relatively quiet, allowing the Unicorn to shadow people or sneak away… from a sufficient distance.

The harness and helmet are heavily armoured, and at least as durable as the Golden Avenger suit of Iron Man armour. Attacks will normally hit the armoured parts.

Against lesser opponents the Unicorn will often erect his force field, doing nothing for a short while as people pointlessly shoot him. He will then seize the initiative, switch off the force field and blast everybody to smithereens.

Back during the early 1960s, military man Milos Masaryk had close ties with the Soviet military and police. However he was actually Slovak  – back then Czechoslovakia was still one country. But despite this he became a KGB agent.

As such he was based in Arsenal Tomska 44, where many of the best Soviet engineers and scientists were working on special military hardware. The great Anton Vanko, was working on several such projects. Among these was a harness and power-projecting helmet. This equipment was very heavy, but Vanko’s friend Masaryk was strong enough to wear them.

With contributions from others (likely including Alex Nevski for the jet boots), Masaryk’s equipment eventually became the Unicorn gear. Some time after Vanko defected to the US, the full Unicorm costume and equipment, and Masaryk’s training, were completed.

The Unicorn’s first mission was straightforward. He came to the US, attacked a Stark Industries plant, and took a suitable hostage (Stark’s secretary). He brought her to a rented house nearby, making sure he would be followed. When Iron Man came, they clashed briefly, though the Unicorn chiefly wanted him to free the hostage.

Iron Man flew away with his secretary, not realising he was being followed by the Unicorn.

Now certain of Iron Man’s location, the Unicorn knew where to strike. He planted powerful explosives in one of the main factories. He then ordered Iron Man to surrender within 15 minutes, or the factory would blow up. Unable to find the bomb in time, Stark complied. However, once he was aboard the plane headed toward the USSR, Iron Man destroyed it and flew back to the US.

At this point, the Unicorn apparently decided against going back to the Eastern Bloc. He stayed in the US as a super-criminal for a time.

The Unicorn was next seen as a part of an army of villains, in 1965. Semi-controlled by Doctor Doom’s technology, these attempted to disrupt the marriage of Susan Storm and Reed Richards. They were opposed by an army of heroes, and eventually chronoported  away by Reed Richards.

No longer working as a Communist agent but as a simple merc, the Unicorn entered the employ of Count Nefaria in 1966. His employer had a daring plan to create a whole new Maggia. The Unicorn and Nefaria’s other lieutenant captured the X-Men in the mistaken belief they may want to become their allies.

Beyond the Unicorn, Nefaria’s lieutenants were the Eel, the Plantman, the Pocupine and the Scarecrow. 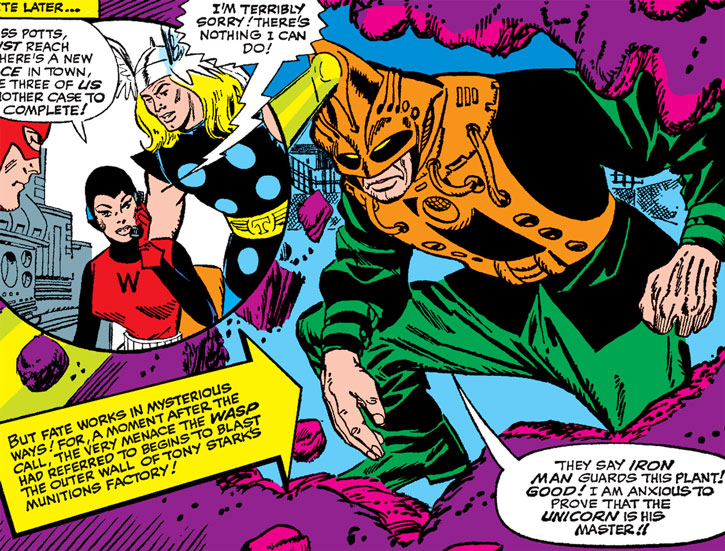 When they declined, the criminals and the Unicorn proceeded with the next phase of their grandiose plan. They took the entirety of Washington, D.C., hostage by creating an unbreakable dome over the city. It could crush Washington at the push of a button. Nefaria then used holograms of the X-Men to state his conditions for ransom to the government.

Since the world now believed they were behind the crisis, the X-Men pretended to agree to collaborate after all. Nefaria sent them into Washington to get the ransom.

However, the Unicorn convinced his fellow criminal lieutenants that they should double-cross Nefaria, take the money and run. Thus, they intercepted the X-Men as they were coming back. Loudly pretending they were mutants to make sure the X-Men would take the blame, the lieutenants attacked the X-Men. They managed to push them back and grab the ransom.

Then the Unicorn turned against his colleagues, grabbed the ransom and led. Neither Nefaria nor the X-Men could stop him. But the Army then rolled in, and in the commotion the Unicorn lost the ransom.

The Unicorn assumed that Nefaria would be able to grab the money. Thus, he set out to intercept the mobster’s yacht. However, the two criminals then discovered they had been manipulated by Professor X. The “ransom” was a mental image created with the technology Nefaria had previously used to create images of the X-Men.

Under unclear circumstances, Masaryk returned to the Eastern Bloc. Denounced as a traitor, he was brainwashed back into a loyal servant of the State at the Pavlov Institute.

This took place weeks before the invasion after the Spring of Prague  – there may be a tie.

The Unicorn was then used as a Guinea pig for a new treatment called the Hyper-Activator. This would mark major changes for him.

When the horn is fully read to fire, the Unicorn’s eyes are glowing with energy. One assumes this is just a little FX rolled into the eyepieces for intimidation purposes.

Note that by 1960s standards, 6’2″ is even taller than by modern standards.

Early on, the Unicorn was fanatically dedicated to his mission. A very noticeable trait was his great pride and confidence in his horn and suit. He always wanted to clash with the mightiest opponent to prove how powerful he was. Masaryk also kept boasting of how awesome and powerful he was.

“See how I can destroy any obstacle with my power horn ! I can’t wait for my first sabotage mission !”

“Run, you hapless fools ! Flee before the staggering horn of the Unicorn ! Tell Iron Man I am here ! Let him face me… if he dares !”

“Hold your tongue in the presence of the Unicorn, fool !”

“Turn, buffoons… and meet your master ! The Eel was not your match — but no man that lives can stand against… the uncanny Unicorn !”

Some of his “spy” skills are a bit speculative – he’s repeatedly said to have them, but never demonstrated them. Not that he needs to…

His STR *might* even be a 06. The Martial Artist (EV) is a cautious step in that direction. 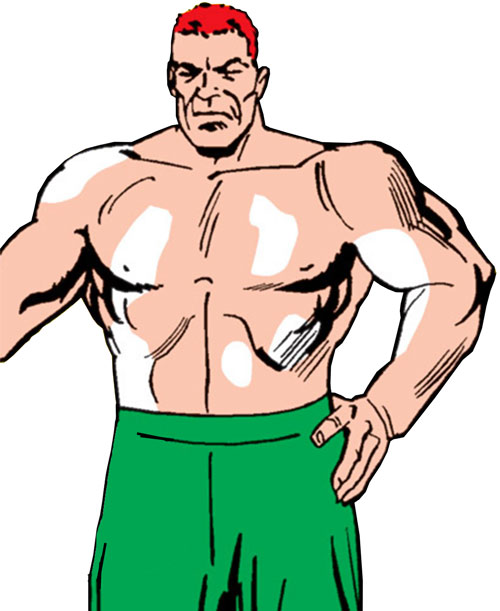 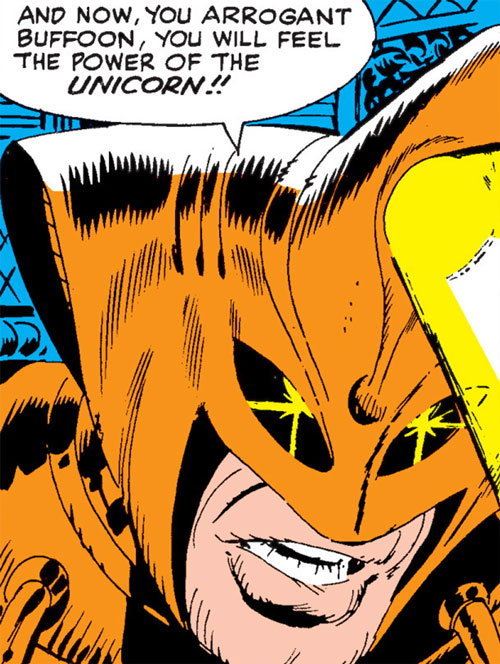 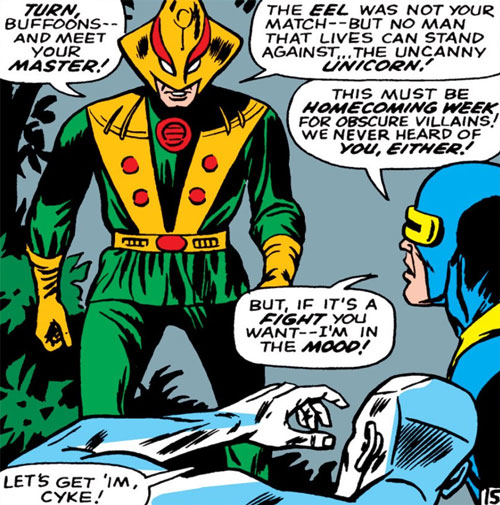