The Unicorn can project exceedingly powerful energy blasts from the third eye on his forehead. Whether he wears the Unicorn helmet changes nothing to this ability. There is some evidence he might be super-strong and superhumanly resilient (perhaps “Class 5”).

He also seems unusually fast and agile. If he playfully goes into full evasive mode for a while (in DC Heroes RPG terms Acrobatics (Dodging)), he becomes very hard to hit. He has demonstrated an ability to escape and resist Fantasma’s mental power to some extend, perhaps because of his insanity.

The Unicorn’s optic blasts have been sufficient to punch a large hole though Sputnik’s chest, or to disintegrate the battle axe Perun used to wield. They are thought to be Negative Zone  energy matter pumped into our dimension , and immediately reacting to form an antimatter blast.

A severely emaciated, mutated man wearing the Unicorn costume appeared in Leningrad. There he conducted a demented rampage and razing many blocks, likely killing hundreds.

He was eventually stopped by the Supreme Soviets (who’d become the Winter Guard). Though taking the Unicorn down was difficult, they detained him and shipped him to a Siberian metahuman research facility. While they recognised the costume, the person underneath was apparently unknown to the team.

The project was successful and the subject received an Unicorn costume. It was based on the last costume Masaryk wore, a redesign by the Titanium Man. However, unchecked energy surges continued. The subject became mad and severely emaciated, eventually breaking free from the lab to be stopped by the Supreme Soviets.

Once in the Siberian lab, the man in the Unicorn costume unexpectedly woke up. He then blasted his way free. Two researchers, Arkady Tegai and Zoya Vasilievna, assumed their merged form as the super-hero Synthesizer and tried to stop him from rampaging again. But their fusion body was eventually shot out of the sky by their opponent.

However, before the madman could attack nearby armed forces trying to stop him, he was cowed into submission by the towering figure of the Titanium Man. The Titanium Man ordered him to surrender whilst pointing an enormous shoulder-mounted chaingun  at his face.

According to secondary sources, the new Unicorn then became a member of the group of super-human operatives fielded by the organisation Remont 4. He worked with the Crimson Dynamo (Valentin Shatalov, Remont 4’s leader), the Titanium Man and Firefox.

Remont 4’s career occurred entirely off-panel . There are indications that they were popular with, and even perhaps considered as heroes by, Russians longing for a return to the days of the USSR.

Much of the Remont 4 ’career‘ of the Unicorn was apparently spent straightjacketed in a padded cell under heavy medication. Yet this allowed him to regain parts of his sanity and much of his weight. It is unclear whether the second Unicorn ended up escaping his cell, or actually joined Remont 4 for a while then left when they disbanded.

This Unicorn may have appeared some years later in the US. Howbeit one suspects that this was another Unicorn – perhaps the Stockpile member.

A man dining at a restaurant with super-villainous patronage was identified as the Unicorn. Later on, a Unicorn was recruited by the new Swordsman (Strucker) within the huge “Thunderbolts” supervillains army Baron Zemo assembled during the Civil War .

This army ended up fighting the Universal Wellspring-empowered hordes. The Unicorn II fought in Chicago along with Dr. Octopus, Quicksand, a person in a Porcupine armour, Eel, Whirlwind and X-Ray.

Originally the Unicorn II appeared morbidly emaciated, his Unicorn costume floating loosely around his extremely skinny body. When recruited in the Thunderbolts — if that was the same person — he had the usual superhuman athletic physique, filling the Unicorn costume.

The Unicorn seemed to be completely insane and incoherent, acting on unfathomable whims and aggressions. The quotes provided illustrate his nonsensical speech. It seems that he received medical drugs as a Remont 4 member, making him able to function rationally to some degree and not routinely launching into spells of massive destruction.

When the new Swordsman confronted him, he did not speak at all. But he seemed to be rational to some extend and to get what was going on (and to understand English).

At this point he’s pretty much a cypher.

Bonuses and Limitations:
Mind blank and Mind field both are Always On (-0) and Mind Field is Self Only/Can Attack Thru.

Equipment:
He wears a replica of the Unicorn costume (without the steel mesh armour or the jet boots). The helm has a BODY of 10, but does not normally provide protection (unless somebody specifically targets it). 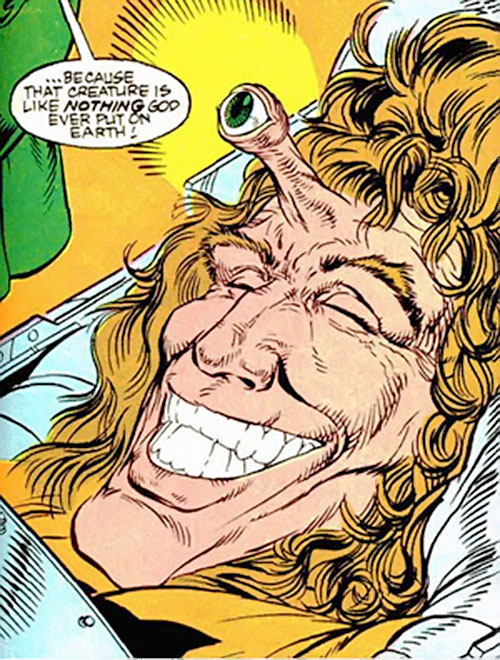 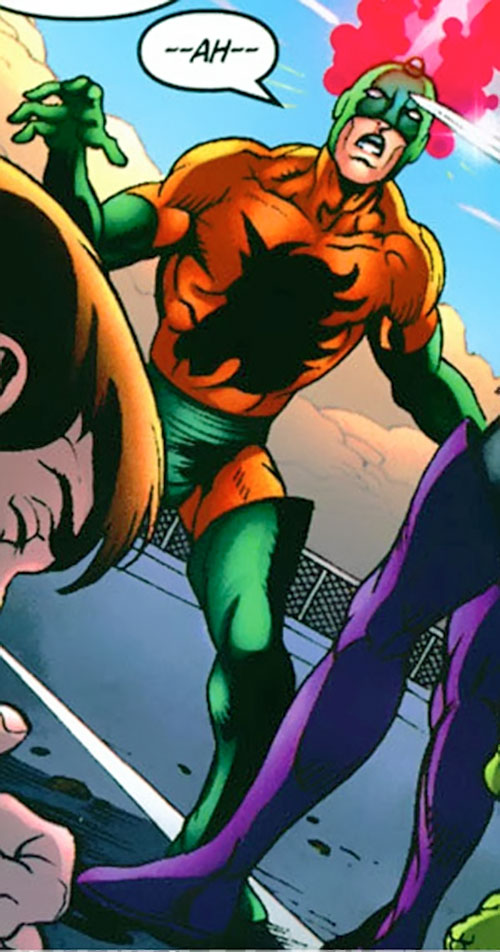