He had a keen mind, highly developed fighting spirit, and great willpower, facts that remained true up until his death.

Little is known about the life of Lord Falsworth beyond the data in the first Spitfire profile. He was likely born in the mid-1880s. When the Archduke Ferdinand  was assassinated, Falsworth somehow became a costumed agent in his Majesty’s service.

This was likely a combination of his exceptional skills (probably stemming from a career in the military and/or counter-espionnage), great patriotism, and the influence traditionally wielded by the Lord Falsworth. Falsworth was masked (since he was a well-known peer of the realm), and this soon become a full-body black costume decorated with the Union Jack , flag of the United Kingdom.

Early on, Union Jack was known as a masked spy-buster, but later become employed as a one-man commando and terror weapon on the terrible battlefields of World War One. Many of his exploits are not known to us readers, but it would seem they were rather impressive, and they were still well-remembered decades later, even in distant America.

Later in the war he banded with other heroes from Allied nations as the Freedom Five – fellow Britons Sir Steel and his Silver Squire, musketeer-like French swordsman the Crimson Cavalier, and young American aviator the Phantom Eagle. Their most tenacious foe was Baron Blood, a vampire serving the Reich and who was secretly Lord Falsworth’s younger brother.

In 1915, Union Jack clashed several times with the London Hellfire Club, who unsuccessfully offered a membership to Falsworth. As Falsworth, he tried to convince Esau Shaw, son of his friend Cornelius Shaw, not to join the Inner Circle of the Club, but was rebuffed. Shaw was soon killed by Sir Waltham, Lord Pierce, whom Union Jack arrested. 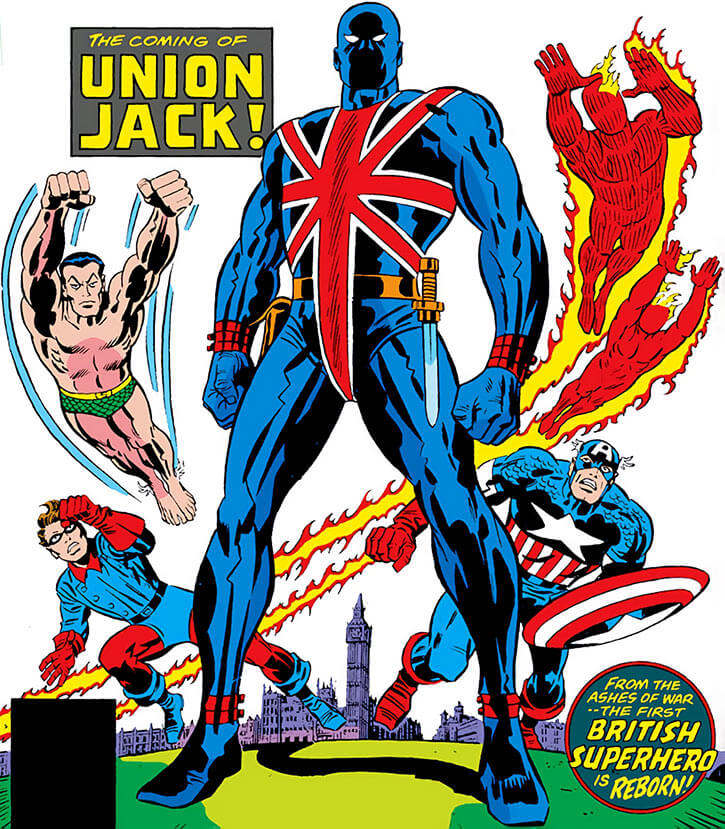 Union Jack then heard rumours about the head of the London Hellfire Club, Harry Manners, having plans that would destroy London. As Lord Falsworth he quickly obtained an invitation to join the Club after all, and that same night he sneaked around in costume to gain intelligence.

He discovered that Apocalypse had left a machine there in 1859, during a tentative alliance with the Club. The machine held a man who was being energised while in suspended animation to acquire great powers and advance Apocalypse’s plan. Manners intended to open the machine soon.

When Manners revealed that he intended to betray his country and destroy London for base pecuniary reasons, Union Jack felt righteous anger and fought Manners and his Hellfire guards with his bare hands, remaining the sole man alive when it was all done.

Since Manners was the only man who knew how to open the machine, Union Jack then just left. The machine would lay undisturbed for nearly 80 years, despite all attempts from Hellfire Club-financed scientists.

At one point, Union Jack was pulled from the time stream along with many other heroes and villains to fight the Fantastic Four, but that was a brief experience during which his reasoning was altered, and which he may not have been able to remember.

Union Jack, being a commando and spy-buster, apparently retired in 1918 since the British Isles were no longer being threatened. During the 1930s, he was an anti-Hitler hard liner, reviling Chamberlain . Lord Falsworth was now too aged to be Union Jack in the new war, and hoped that his physically and mentally gifted son Brian would succeed him.

Brian’s pro-appeasement stance drove a bitter rift between the two men, especially after the young Lord seemingly joined the Reich. Compounding the hatred of Lord Falsworth against the Nazis, the Lady Falsworth was killed in 1940 during the Blitz.

Reportedly, Union Jack I organised a secret operation in 1939 against the Reich. A notorious butcher, improbably named Herr Samurai, had been leading a squad of ninja S.S. Union Jack assembled a commando of kung fu fighters, and though one would assume that they were successful in eliminating their opposite numbers, there were only two survivors.

One was Lord Falsworth himself, and the other was one of his recruits, the legendary Fat Cobra. This operation was apparently highly classified, though the material was available to historians in the 2000s.

In 1942, Lord Falsworth and his daughter met with the Invaders, the famous band of heroes fighting for the Allies who were the modern version of the Freedom Five. Jacqueline Falsworth had been attacked by a vampire, and to her father there was little doubt that Baron Blood was back.

To Jacqueline’s dismay, her father broke out the Union Jack uniform and weapons and joined the Invaders in order to destroy Baron Blood once and for all. During the clash his legs were crushed and his daughter was nearly killed, but Baron Blood was staked.

Jacqueline emerged from the ordeal with super-powers, and since her father was forced to retire by his wounds, she joined the Invaders as his replacement as Spitfire.

They then discovered that Brian had been fighting against the Reich in Germany all along as one of the men wearing the costume of the Mighty Destroyer. Changing costumes to become Union Jack II, Brian joined with his family and would soon also become an Invader – the British contingent among the famous group having thus all been Falsworths.

Brian died in 1953 in a motor accident, while Lord Falsworth, though quite aged, was still in good health. Two years prior, the Falsworths had joined Roger Aubrey’s V-Battalion, an organisation inspired by the All-Winner Squad.

Lord Falsworth remained an important backer and sponsor of the organisation. He hoped for some time that Jacqueline’s son Kenneth would become the next Union Jack but Kenneth was a painter, not a fighter, and also suffered from severe anaemia.

In 1981, a slasher started killing the people of Little Storping-on-the-Thames. Lord Falsworth immediately knew it was Baron Blood. Since he was nearly a centenarian, most people assumed he was not thinking clearly, and Falsworth summoned Captain America for help.

Cap soon determined that the Lord Falsworth was quite right, and organised an ambush. He was helped by Kenneth’s close friend, a young chap of less than respectable social extraction named Joey Chapman. The highly determined Lord Falsworth wore his Union Jack costume and intended to serve as bait to force Blood to make a mistake, but was eventually talked out of it.

Chapman volunteered to wear the costume instead and coordinate with Captain America.

The trap worked. Captain America beheaded Baron Blood, and Chapman gave a rather impressive account of himself whilst wearing the famous costume and wielding the signature weapons. The beheaded Baron Blood was burned in two parts close to the Falsworth Manor.

While watching the flames in the night, the Lord Falsworth quietly breathed his last, knowing that his hated enemy had been destroyed and that a new man had been found at last to carry on the Union Jack tradition.

Admittedly, the first illustration features Joe Chapman, but he’s using replicas of the original’s costume, weapons and accessories so it works fine as an illustration of Union Jack I. 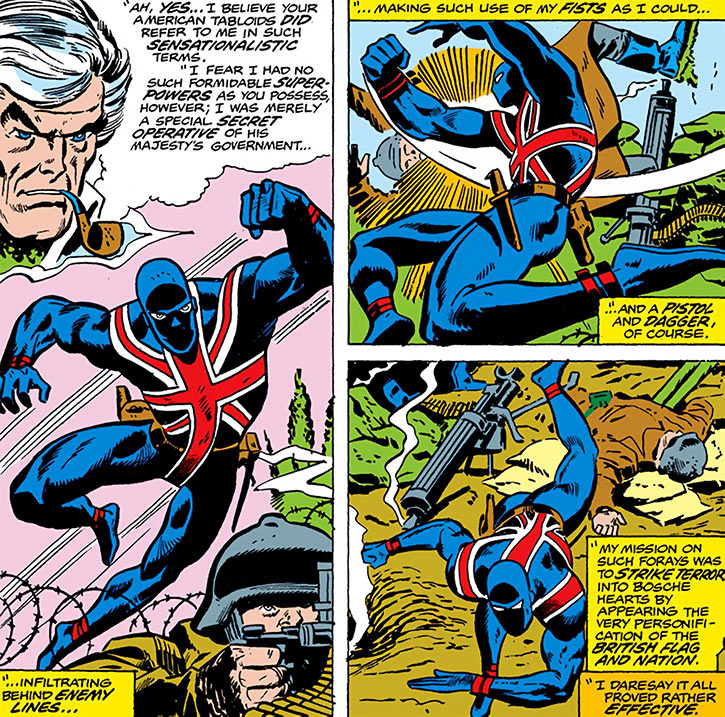 Even in his old age he was driven, perhaps even fervid. Though he readily admitted he largely lived in his memories and past glories, he was always ready to brave dangers and go into action.

For instance, he once made a parachute jump for a clandestine mission in Germany after both his legs had been irretrievably crippled (his daughter landed first and Superspeed-stacked bales of hay for the Lord Falsworth to land into).

Being Union Jack and ensuring Union Jack’s legacy was his life, and the protection and glory of Great Britain his constant preoccupation.

“My mission, on such forays, was to strike terror into bosche  hearts by appearing as the very personification of the British flag and nation. I dare say it all proved rather effective.”

“That means you’ll die tonight, just as you would have died two decades ago, if this silver blade had found your inhuman heart !”

“You know, Jacqueline, it’s likely to get a bit maudlin if we keep fussing over each other this way ! I’m splendid, thank you. But now, since I’m scarcely in condition to walk into Berlin, I do hope that driver is who I think it is.”

Lord Falsworth (in his prime)

In the 1940s, Lord Falsworth is an older man. His DEX and all his Skills are down to 04, and his STR and BODY are 03. He can only use about 20 HPs for physical endeavours.

As the decades go by, Lord Falsworth loses another AP of DEX, Skills and STR, and eventually of BODY, and can only muster 10 HPs for physical endeavours. He never acquires the Age (Old) Drawback, though, remaining healthy for his age, but developed something closer to the Age (Young) Drawback by his 80s, as people wrongly assumed he must have been getting senile.

After the 1942 clash with Baron Blood, he acquires a SPR (crippled legs).

There is little material about the period appearances of Union Jack, really. However, I think it is reasonable to write him up as a formulaic WWII hero with some added formulaic pulp bits, at least in terms of game stats. 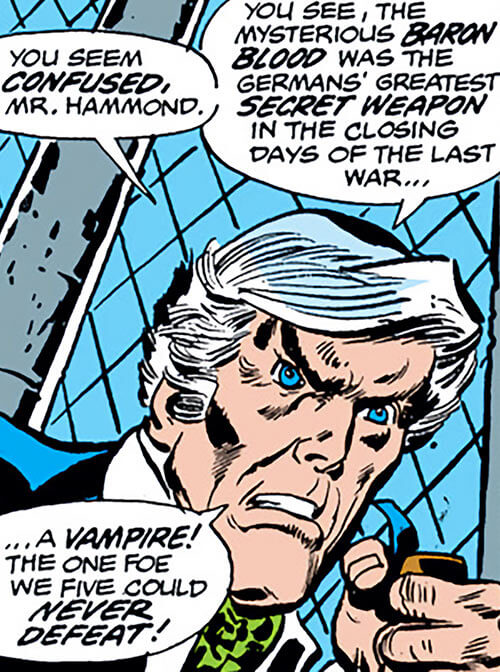 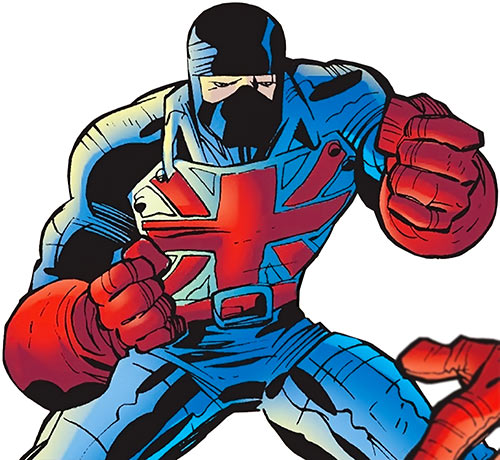 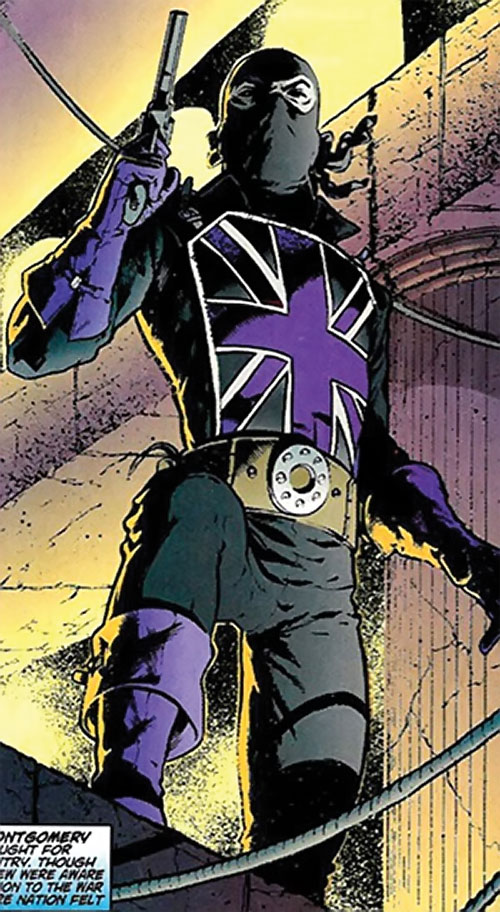