These are the weapons appearing in the 1999 classic player-vs-player shooting video game Unreal Tournament. Some pictures are from latter games, though. These weapons are also more or less the ones in the 1998 single-player Unreal video game.

The early Unreal games were a pretty big deal. It was Quake’s big rival as a successor to Doom. Among other features, all weapons had a primary and secondary mode of fire, using the left or right mouse button.

Unless otherwise specified, all UT weapons have the Lethal Limitation.

Originally used as a miner’s tunneling tool, the Impact Hammer is a pneumatic crushing device that now pulverizes opponents as effectively as it once shattered rock.

It is used with Weaponry (Exotic), and can be used in the game to demolish enemies in one of two ways : 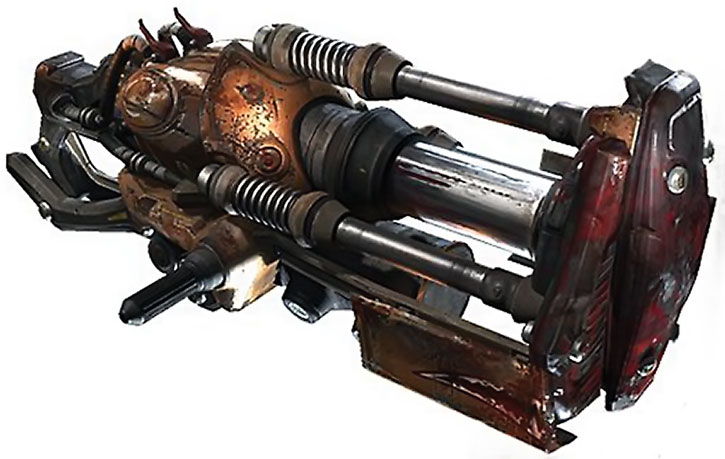 Based on an antique wood-cutting tool, the chainsaw is a devastating melee weapon capable of instantly inflicting massive damage. It is reasonably wieldy, but not as heavily armored as the Doom combat chainsaw.

This lightweight yet high-powered handgun is an accurate and potent killer at close or medium range. So easy to handle you can wield on in each hand (using the usual Schtick (paired firearms) rules).

The Enforcer can fire even more quickly using the slightly less accurate (but equally deadly) sideways-carriage firing technique (a Flailing attack). This is chiefly done when shooting at point blank. 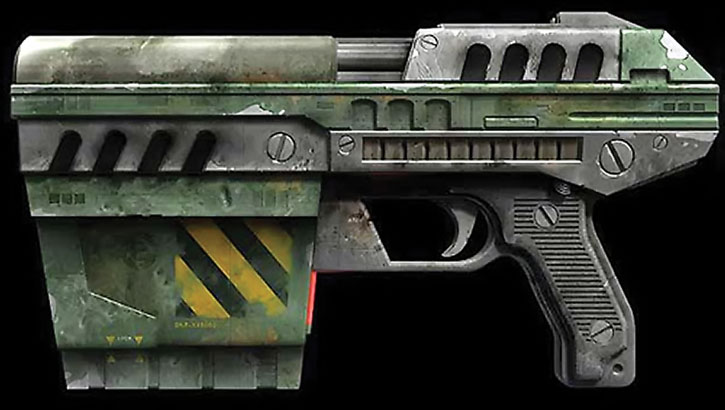 The unconventional close- to medium-range weapon is more deadly that it appears at first glance. The primary fire spews clumps of toxic sludge that stick onto solid surfaces, or float in water. They fiercely explode after a few seconds or when touched by another object or passerby.

Some competitors cover the floors, walls and ceilings of narrow hallways with the stuff while running backward to trap unwary pursuers.

The secondary fire load up and fire an enormous blob that will splash apart when it hits a surface, spreading smaller hunks of the dangerous substance across a wide radius. 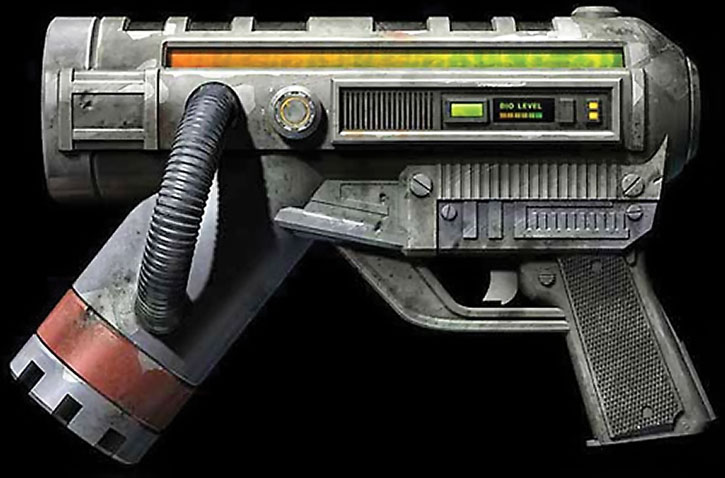 Emitting searing bursts of pure energy, the devastating Shockrifle is an ideal weapon for medium to long range attacks. 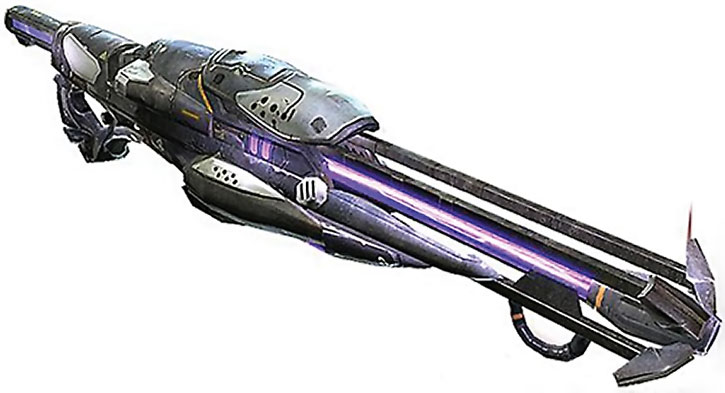 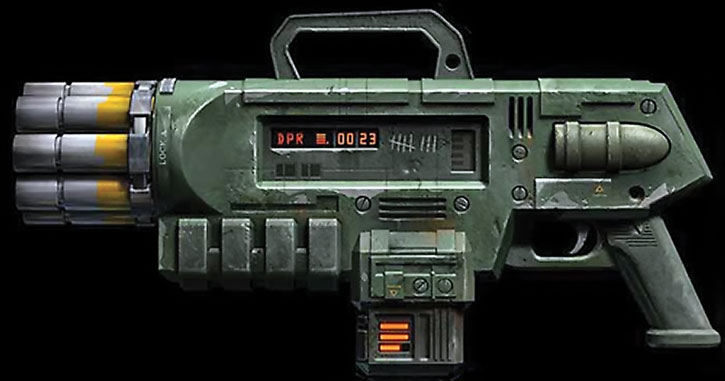 A descendant of the Razor Jack, the Ripper features larger blades than its predecessor. The laser-sharp blades ricochet off solid surfaces, making around the corner kills not only possible, but easy. The secondary fire causes the blades to explode upon impact, generating a considerable splash radius of damage. 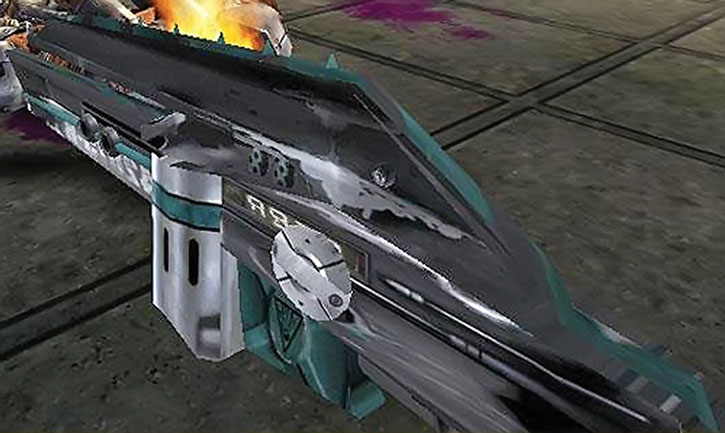 As simple as it is dangerous, the Minigun features a rotating barrel assembly and an unmatched rate of fire. If the primary fire isn’t fast enough for you, try the much faster (and less accurate) secondary fire (according to circumstances that may be a Flailing attack or Critical blow, or even a Multi-attack). Good aim is the key to mastering the Minigun. 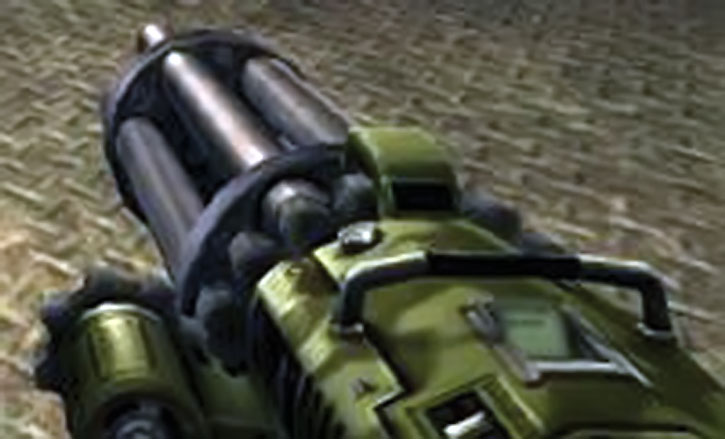 This portable enemy blender can deliver instant death at any range. While the rate of fire is slow, the Flak Cannon’s destructive power is formidable.

Arguably the most popular devastation tool in the Tournament, the rocket launcher is an extremely versatile medium- to long-range weapon. The primary fire launches one to six rocket-propelled grenades in a spread formation (a tighter circular formation is possible). The grenades will explode on impact.

The secondary fire alone kicks out one to six unpropelled grenades that will detonate a few seconds after deployment. Skilled users can take advantage of the Rocket Launcher’s heat seeking feature (in game terms, locking a target means getting RAPs on a target in one Phase but not shooting ; when the actual shot is made during the next Phase, it gets a +1CS on its AV).

The fact that its basic design has remained virtually unchanged for decades testifies to the Sniper Rifle’s timeless and universal functionality. It fires an extremely robust rifle round capable of abruptly ending a competitor’s quest for the title of Grand Champion, and is scoped for extra long-range accuracy. 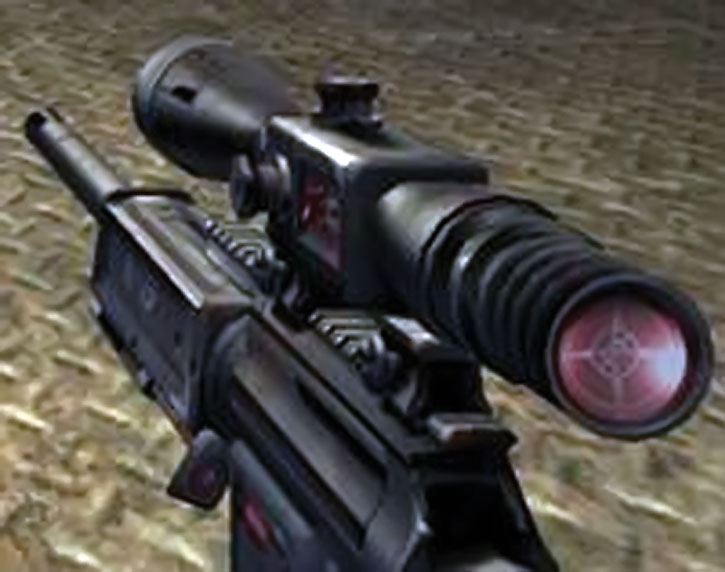 The first time you witness this miniature nuclear device in action, you’ll agree it is the most powerful weapon in the Tournament. Launch a slow-moving but utterly devastating missile with the primary fire. But make sure you’re out of the Redeemer’s impressive blast radius before it impacts !

The secondary fire allows you to guide the nuke yourself with a rocket’s-eye view.

Due to the extreme bulkiness of it’s ammo, the Redeemer is exhausted after a single shot.

Two lethal effects are left to the GM’s discretion : 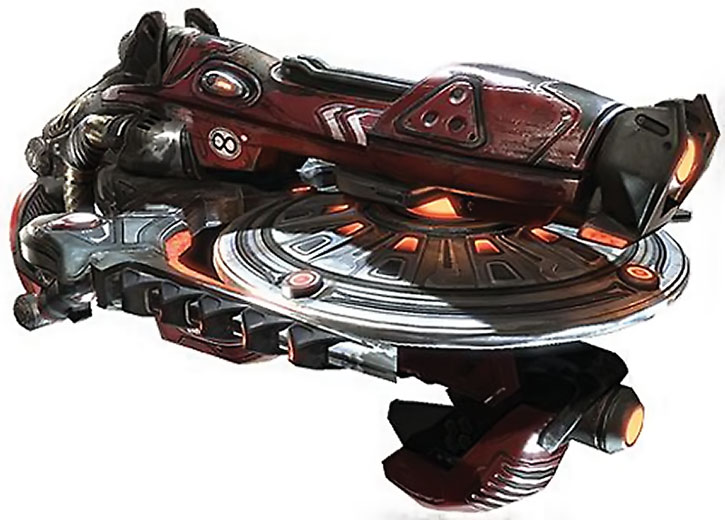 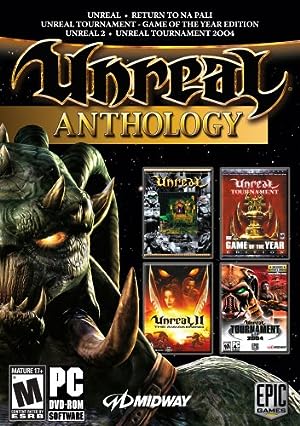