Bob’s body has been altered to more closely resemble a Uranian physiology. This leaves him unable to easily survive in other atmospheres, such as that of Earth, so he has to wear his protective suit at all times.

He kept the full extent of these changes hidden for a while, maintaining illusions of a still human-looking appearance. He’s since discarded these attempts. It’s been shown that in order to eat he must distend his esophagus, but other biological changes have yet to be revealed.

Educated by the technologically advanced Eternals, Bob has knowledge of highly advanced sciences. He built his flying saucer from scratch, and repaired and upgraded M-11. He seems to have some ability to neutralize the technology he embedded in M-11, such as his energy shields.

His suit provides a Uranian atmosphere in which he can survive. The sphere over his head is actually a force field containing the atmosphere rather than a solid object. The suit can also harmlessly absorb electrical attacks.

Most of his powers come from his headband, which allows him to access peoples’ minds, project illusions into them, and record their memories and mental patterns. The headband can also record its surroundings, or even the genetic structure of those it encounters, and has records dating back to the first time he wore it.

It also allows him to pick up on the psychic residue of those who may have been in his current location in the past, allowing him to witness past events.

The Uranian’s flying saucer is a model of extraterrestrial science. It responds to his mental control by way of his headband, creating a virtual reality interface which only he can see. Damage to the ship also seems to cause pain to its controller, even if he’s not in it at the time.

It can create whatever its pilot wants, either as holograms or as actual solid objects, rearranging its compartments to accommodate any guests wishes or creating equipment for their use (such as underwater gear when the team went to recover Namora).

His activities as Marvel Boy drawing attention, Bob was recruited by Jimmy Woo when President Eisenhower  was kidnapped by the Yellow Claw. Joining the group being assembled, Marvel Boy remained with them until they were forced to disband.

A shortly while later Bob received a distress call from Uranus. Arriving home he found the city destroyed, and learned the truth about his origin. The settlement had been a penal colony for rogue Eternals who had tried to conquer Earth. The native Uranians, living in the planet’s core, supervised the Eternals so they wouldn’t return to Earth.

That was why the Eternals had helped Marvel Boy and his father — they saw them as a loophole to be exploited.

The Uranians disagreed, causing the Eternals’ destruction. Marvel Boy would have died as his Eternal technology (apart from his headband) failed him. But the Uranians took pity on him and accepted him into their number. This required him to be genetically reborn, and he spent decades in a membrane/chrysalis.

During the Eternals’ destruction they rushed to completion a duplicate of Marvel Boy, one of their own of the same approximate size and shape as Bob, whose body and mind they modified him to closely resemble. The duplicate arose too late to be of help, and was born unstable with false and fractured memories.

It believed the destruction of the Eternals’ protective dome had been the fault of bankers of Earth who stalled him when they denied his request for a loan to purchase medical supplies. Returning to Earth to exact revenge, he called himself the Crusader and began a rampage.

The Fantastic Four intervened, but the Crusader’s misunderstanding of the Quantum Bands he wore that made him reckless. He absorbed so much energy that the bands overloaded and his body was destroyed.

For years Bob lived a solitary existence despite the Uranian collective, since he regarded himself a separate entity by nature. He passed the time by building a new flying saucer, although the Uranian culture forbade him leaving the planet.

Still, when he received a distress call from former allies M-11 and Gorilla Man about the near death of Jimmy Woo, Robert decided to return to Earth to help. The Uranians accepted this, but told him that this meant severing his ties with the collective for all time. He did so.

Returning to Earth he made sure to maintain an illusion that he still retained a human body, even among his friends.

Return of the Three Dimensional Man

When his illusion slipped and his teammates saw his true appearance, Bob was relieved that they weren’t bothered. He has stopped disguising himself since then.

Detached and alien, Bob has forgotten most of what he knew about human interaction. He acts as a cold and impassionate observer a lot of the time. He’s very much an outsider in Earth culture, and is only starting to recover his emotions.

He’s probably still recovering from the shock of being separated from the Uranian group-mind. It’s unknown whether he’ll experience delayed reactions to this.

“What in the name of the universe —?”

“That… wasn’t easy. Human minds seem so alien to me now.”

(To Gorilla Man) “Ken, I don’t know why you’re so amused every time we mention my homeworld.”

(Learning of M-11’s betrayal) “I left the Membrane… my only home… for the puppet of a ridiculous villain. You think an energy shield will save you ? I gave you that shield ! And I can take it away !!!”

Jimmy Woo: “You know what I’ve been thinking, Bob ? I think the Uranians knew it was time for you to rejoin the human race.”
Bob: “Perhaps… or maybe they thought I was weird.” 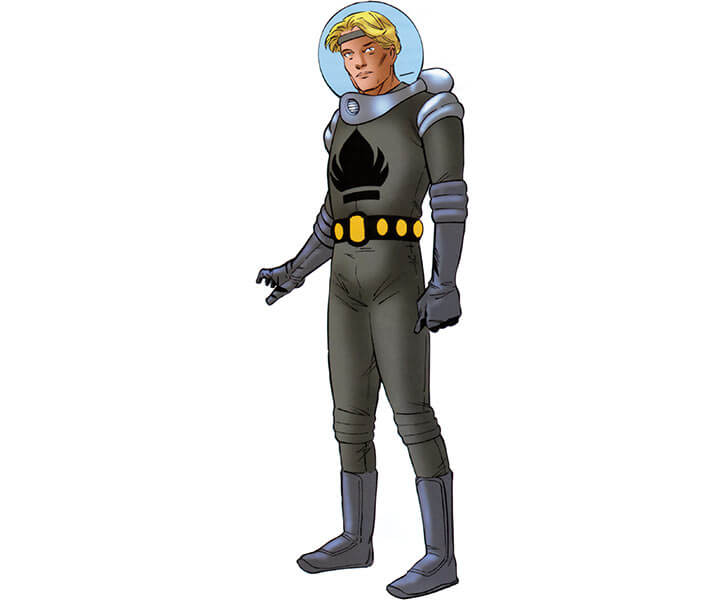 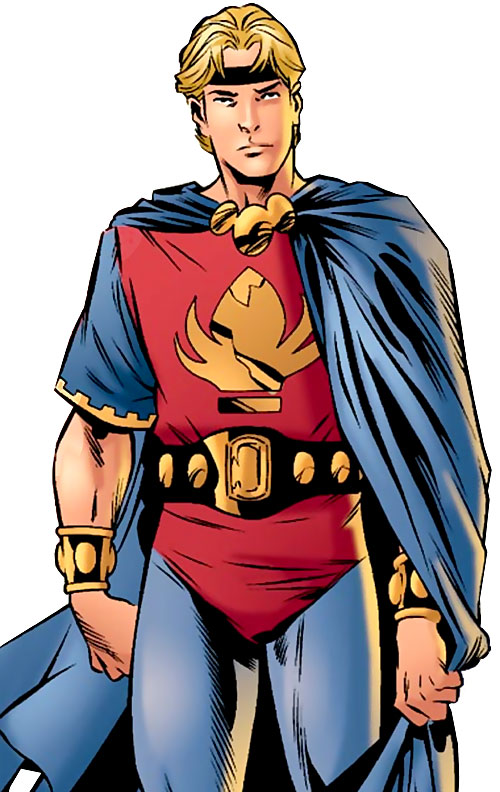 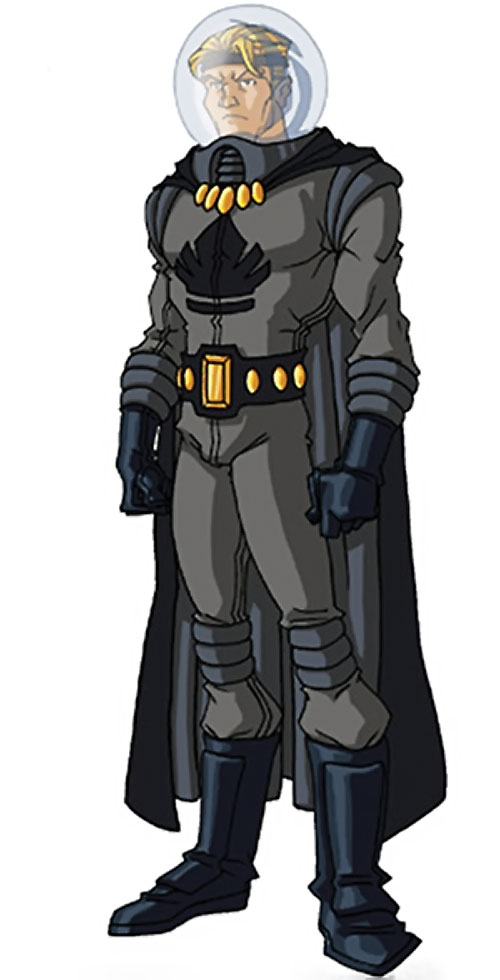 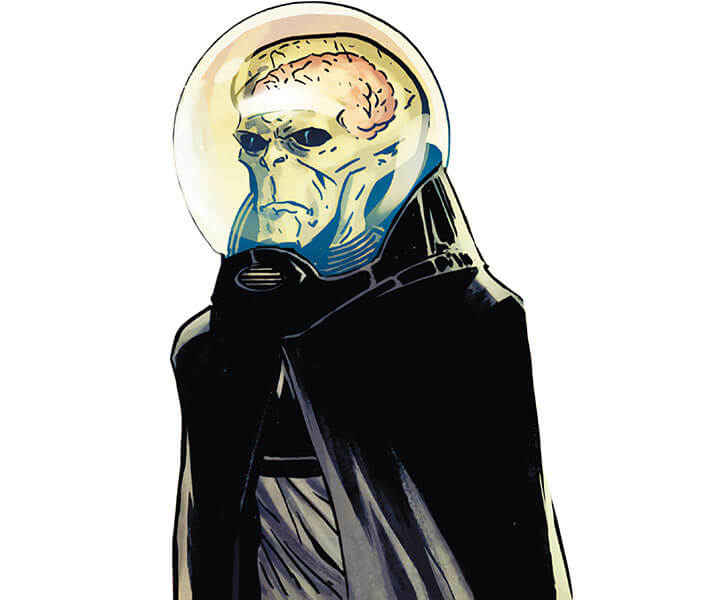 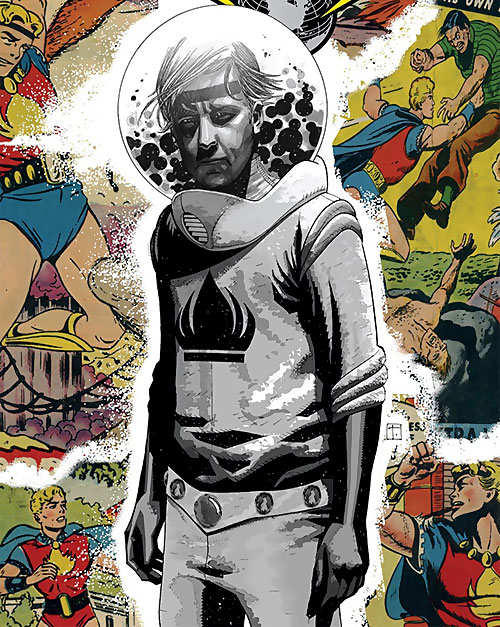 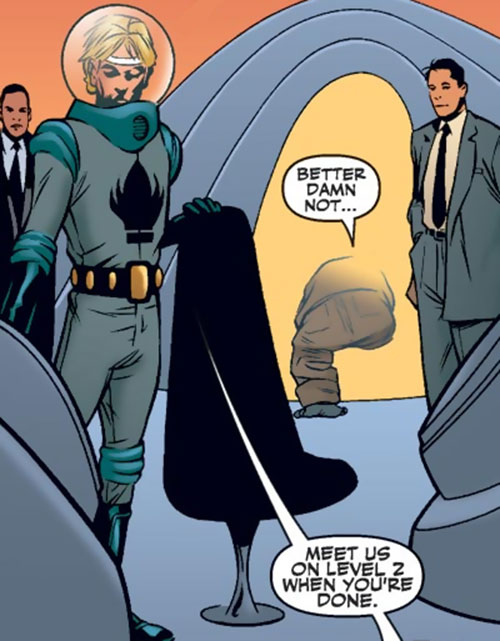 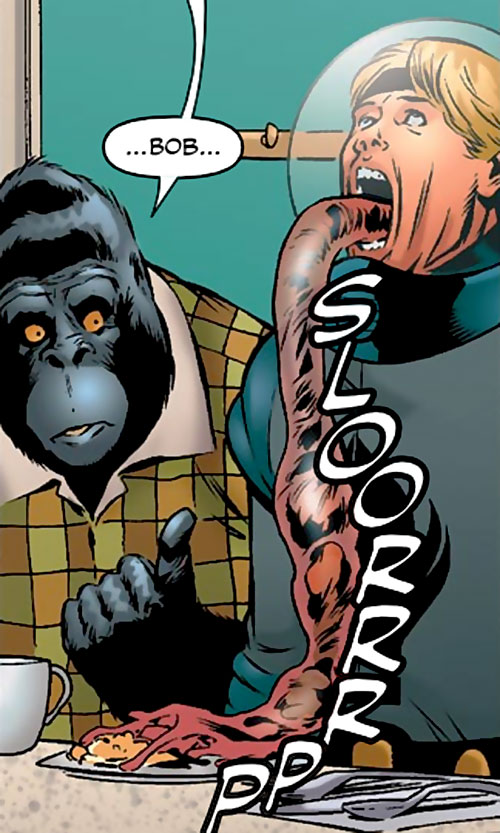 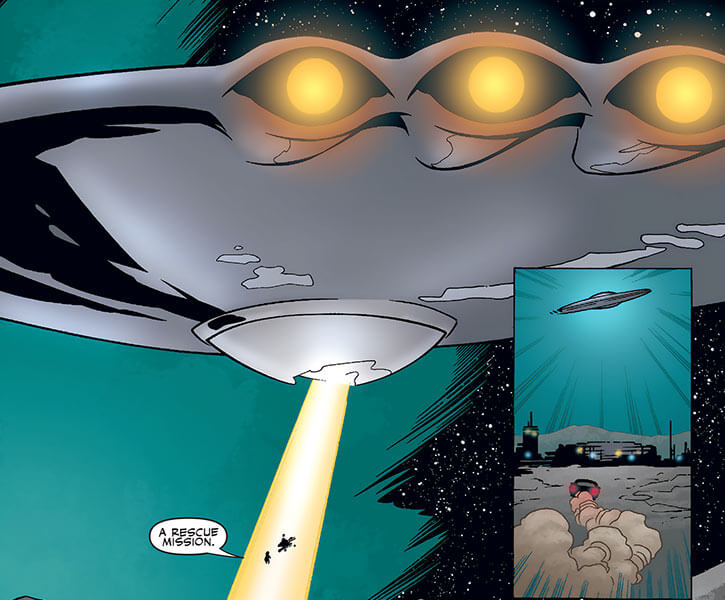