Ursa Major’s mutant power is that he can turn himself into a huge brown bear. As such he possesses super-ursine strength and resilience. He is strong enough to lift a rail car, and with enough resolve he could take blows from the Hulk.

As a bear, he’s also surprisingly fast and able in hand-to-hand combat. His mentality becomes more feral and determined, and he seems to become resistant to some forms of telepathic intrusion.

In bear form he has acute feral senses. He also becomes a world-class tracker who can reconstitute complex events from looking at footprints and clues in the environment.

And somehow, he’s able to move around rather quietly on his padded plantigrade paws despite his mass.

Until a decade after the Great Patriotic War , a kill-on-sight policy existed toward mutants in the USSR. The exact reasons for this are unrevealed. But it seems likely that those were an offshoot of Stalin’s horrendous purges during the previous decades.

By the mid-1950s, however, a gifted and well-connected researcher, Professor Piotr Phobos, gained a rough understanding of the mutant phenomena. He came to realise that the NATO countries would likely gain an advantage over USSR by enlisting their mutants in their armed forces.

Phobos made his case well enough that mutant children stopped being killed. He them went on to create a school for superhuman mutants. His best-known pupils would eventually become the Soviet Super-Soldiers.

Phobos’ very first recruit was Mikhail Ursus. Ursus had been born some years before the kill-on-sight order was rescinded but who had survived these trying times. The boy was able to use his mutant power well before puberty. He lived by himself as an animal in a remote and mountainous area.

After locating and capturing him, Phobos raised him and educated him until next to no traces remained of Mikhail’s early feral years. The kid was still oddly silent and savage by age 7, but very little in his adult behaviour could lead one to suspect his feral past.

The exact events at the Super-Soldier School are still undocumented. But it is known that Phobos developed technology to secretly drain the powers of his pupils, including Ursus, and gain artificial powers for himself. Several pupils were killed by the draining effect.

Phobos’ secret abuse of his students was eventually discovered in the late 1970s. The State then sent the Red Guardian (Tania Belinski) after him. She failed to stop him and he fled. The Super-Soldiers did not learn about how he had used them until some years later.

Being older by seven years than his teammates, Ursus had a solo career as an agent of the KGB. He also was made Major with the Red Army. Eventually, the Super-Soldiers were transferred under the command of Colonel Yuri Brevlov, the head of the KGB.

The Crimson Dynamo (Dimitri Bukharin) joined the group, both as an operative and as a political commissar . Then Ursus rejoined his childhood friends Nikolai and Laynia.

The foursome were assembled just in time for a last-ditch mission in the Forbidden Zone to stop the Presence. The Presence’s energy was causing the radioactive wasteland there to expand at rapid rate, threatening to engulf the USSR. During that mission, the Super-Soldiers allied with the Hulk.

The Super-Soldiers continued to conduct missions for the State. But after the Phobos revelation they resolved never to blindly obey the authorities again. Thus, most of their missions were conducted on an unsponsored super-heroic basis, without the Crimson Dynamo. Most of those actions are undocumented, though they are known to have fought the Red Ghost at least once.

Ursa Major also had a minor solo encounter with mountain bandits. During this, he rescued a captured young girl named Sophia.

Later on the Soldiers were teleported off Earth for the Contest of Champions between the Grandmaster and Death. Ursus was not an active contestant, though Darkstar and Vanguard were.

Though the Soldiers were wary about the KGB, they did not suspect how right they were. It was the Gremlin who discovered that the directorate had been infiltrated by alien Dire Wraiths. The Gremlin allied with Rom and Starshine.

The Dire Wraiths responded by manipulating the Super-Soldiers into confronting the spaceknights before they would destroy their base in the Forbidden Zone.

During the battle, Ursa Major shadowed the Gremlin into the buildings of the Forbidden Zone. There, he discovered the horrors of the Dire Wraiths base and was attacked by Dire Wraith forces. Ursus killed those off, but was wounded.

Recovering and allying with Rom and Starshine, Ursa Major led his team-mates in a savage attack on the Dire Wraith forces, killing them all. After the war in the Forbidden Zone was over, the Gremlin joined the three Super-Soldiers.

The four Super-Soldiers (Gremlin, Ursa Major, Vanguard and Darkstar) continued to act as super-heroes, their ties with the KGB growing ever weaker. To help with this role, the Gremlin built himself a sophisticated suit of power armour and called himself the second Titanium Man.

In 1987, the Super-Soldiers reluctantly allied with the Crimson Dynamo (Dimitri Bukharin). Their shared goal was to get Magneto to avenge his crimes against the Soviet Union. Howbeit, they were defeated by the Avengers in Kampuchea.

During another clash, this time with the X-Men, the Soldiers discovered that the Dynamo had purposefully misled them. They decided to stop their pursuit of Magneto.

The government’s pressure increased to have the Super-Soldiers join the official team. Meanwhile, the Gremlin was accidentally killed by an out-of-control Iron Man.

Mere months before the fall of the Berlin Wall, the Super-Soldiers decided to defect to the West. They teleported to the Avengers’ Mansion to discuss their expatriation. However the official team, the Supreme Soviets, tracked them down, tricked them and ambushed them. They left the Super-Soldiers for dead.

The Super-Soldiers appeared to flatline despite the efforts of the Avengers’ medical team. However, their life force was actually being channelled through a gigantic bear-like darkforce  construct containing their combined power. The monster blindly rampaged throughout Moscow, looking for revenge.

The darkforce bear defeated and absorbed the Supreme Soviets, nearly killing them. Captain America convinced the spirits of the Super-Soldiers within the bear to stop before they became murderers. The Soldiers absorbed enough life force to revive themselves, thus emerging from their coma with their actions as the dark bear but a dream.

The iron curtain has fallen

Their recovery from death was long and difficult. While they were still bed-ridden, the USSR collapsed. Still, the new government negotiated their extradition back to Russia. The Americans complied, and the three Super-Soldiers, placed in suspended animation, were sent to a Siberian base.

However, they were rescued by the mutant underground of Father Garnoff, the Exiles.

Hounded by Russian forces, the former Super-Soldiers hid with the mutant underground. While they were still too weak to prevent Firefox from slaughtering several key superhuman associates of Garnoff, Darkstar teleported survivors to safety.

Eventually, the ex-Soldiers recovered enough to defeat a detachment of Russian armed forces with the help of Sibercat and Stencil, two other members of Garnoff’s underground.

When another detachment led by Firefox found them, the mutants were healthy enough to beat them all up and brutally incapacitate Firefox. The small group, calling itself Siberforce, led an undocumented career.

During an unrelated incident, Vanguard was seemingly killed by Threkker of the Starblasters, though he eventually came back.

The number one threat to America

Darkstar (Laynia Petrovna) was more recently captured by Colonel Tskarov, formerly the dreaded KGB officer known as the Snow Wolf. Hiding the truth, Tskarov then contacted Ursus and Krylenko. He told them he could use his extensive criminal contacts to try and locate Darkstar, in exchange for their services as shady mercenaries.

Very anxious about his sister, Nicolai convinced Mikhail to accept the deal, unaware that Tskarov was actually torturing and using Laynia to power an experimental machine.

Wearing new uniforms (perhaps due to their unease over their association with Tskarov), they moved to New York City’s Little Odessa. However Tskarov soon attracted the attention of the Black Widow herself, and from there of Daredevil – though Ursa Major defeated and captured a wounded Daredevil.

Hornhead and the Widow eventually allied with him and Vanguard, defeated Tskarov and rescued Darkstar.

Ursus has some uniforms made of unstable molecules. Those can disappear when he changes and reappear when he reverts to his human state. However he does not always wear them. Thus he might end up naked after he transforms when not wearing one – no ripped purple jeans.

Ursa Major in his bear form has a strong animalistic odor.

Official Marvel height and weight for his bear form are 7’5” and 955lbs., which seems very modest given the way he’s usually depicted. Measurements better matching the primary material are given in the Background section of this profile.

One caption described him as weighting ten tons, which clearly seems to be an exaggeration.

Ursa Major is generally the calmest, most level-headed, most cautious of the Super-Soldiers. He may look like a savage bear, but he’s not particularly quick in jumping into combat. Ursus often is the one to hold back his more hot-blooded comrades as he realises things are not as they seem.

He’s sternly patriotic, always concerned about the defense of the Motherland.

His calm suddenly become very thin when the situation involves an endangered child, or when facing a manifestly inhuman, monstrous foe. In those cases his bestial instincts soon threaten his usual self-possession.

Likewise, while he will normally not kill, he’s likely to seriously wound people threatening children and to butcher horrible, inhuman opponents such as Dire Wraiths and people who talk in the theatre.

Due to his roots and instincts, Ursus enjoys riding his motorcycle to some rural, remote area with mountains and forests to trek in (and possibly hunt in). He loves wandering in pristine Russian wilderness.

“We were brought up as brothers, Nikolai ! I cannot desert you !”

“Power of the proletariat, the Hulk is half my size — but more than ten times as strong ! What could create such a creature ?”

“Darkstar is correct, Vanguard ! The motherland is in danger, we must respond !”

“No comrade, you have not wounded me… you have made my day ! RRRAAAGGG!”

A Russian guy who can turn into a bear is pretty much inevitable, really, and he’s far from a major character. Just insert him. He might have met Stalnoivolk during one of his wilderness escapades, and might share his origins with Mrs. Gradenko – perhaps they are both werebears.

When he morphs into his bear form, Ursa Major has the following stats :

Advantages:
Language (Russian), Schtick (Reparative shapechanger), Misc.: In bear form, Ursa Major is not considered to have a human mind and is thus unaffected by effects limited to human minds such as some forms of telepathy.

Ursa Major’s Schtick (Reparative shapechanger) allows him to pay half the normal HP cost (rounding down) for a Desperation Recovery — provided that he shifts form. His wounds tend to disappear when he does so, but this seems to require effort and determination (and thus HPs).

It *is* possible to Neutralize, Drain, etc. Ursa Major’s Alter Ego, since this is a mutant power. For such purposes, treat his Alter Ego as a Power, with a number of APs equal to his STR – the key score for his bear form.

Power of the proletariat !

I prefer the Alter Ego approach to a Shape Change one, but if you prefer Shape Change (or Zoomorph) the adjustments are simple to make.

The exact Powers for the ursine form are somewhat on the speculative side — practically none of them are clearly demonstrated.

By Sébastien Andrivet (with Jackson for v2). 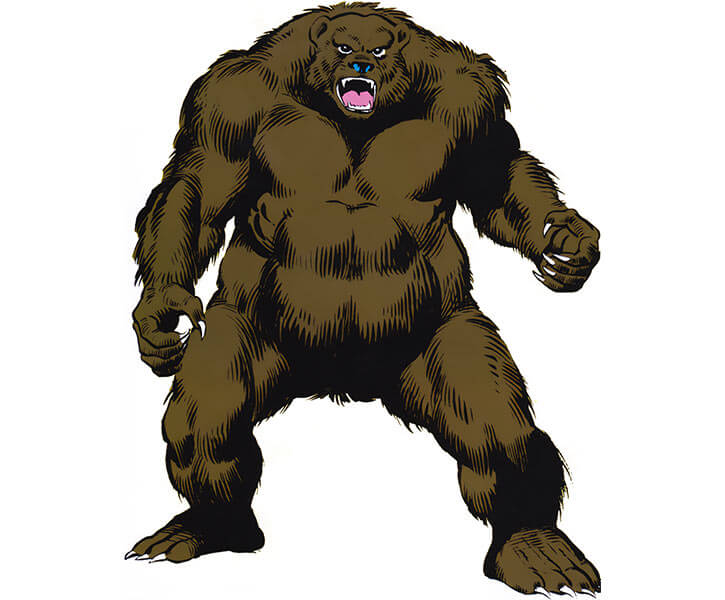 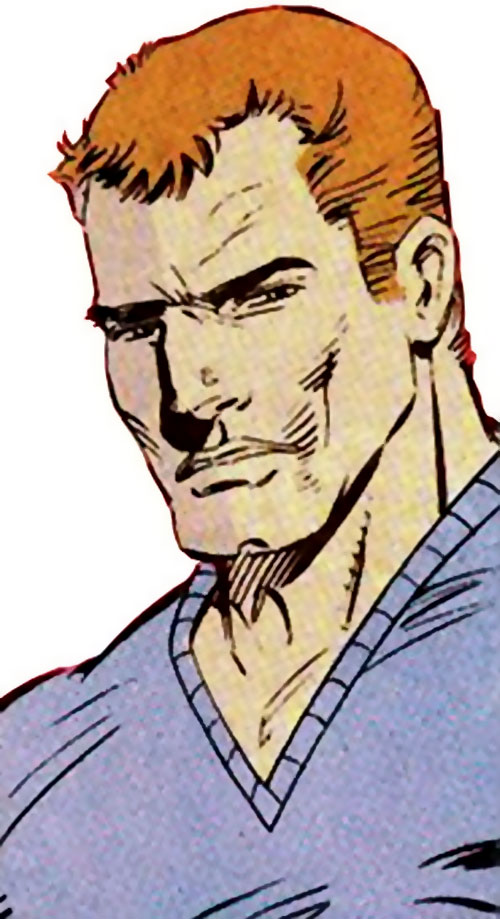 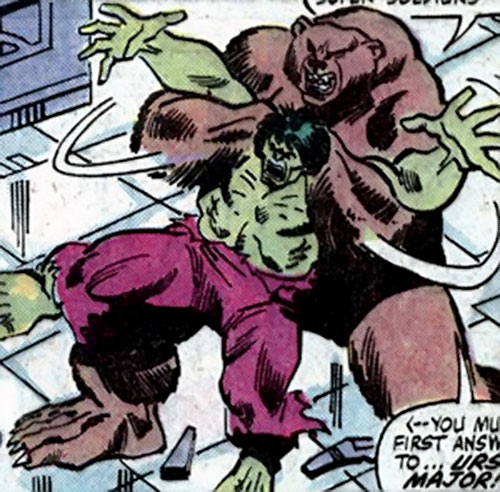 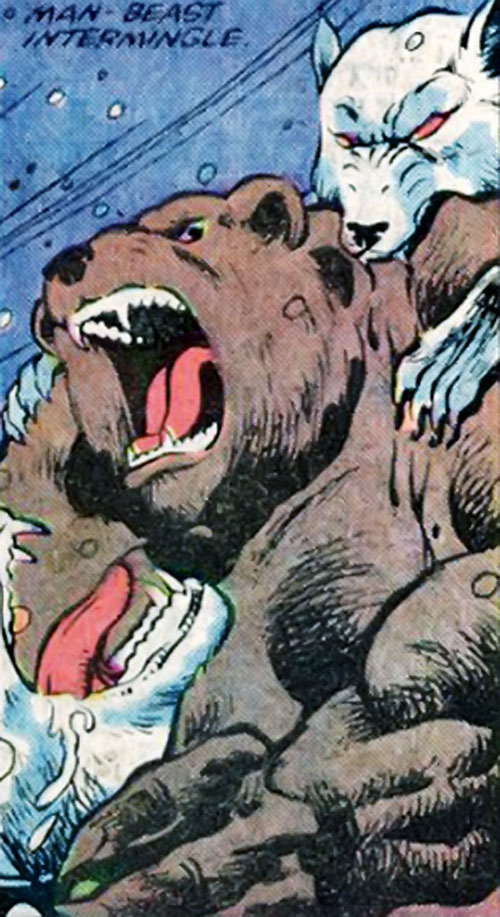 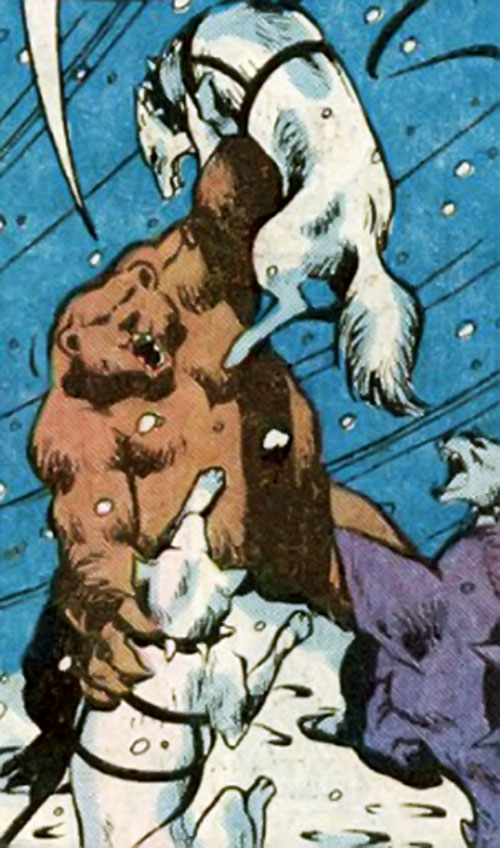