Ursula is the main villain from Disney’s 1989 animated film The Little Mermaid. She was inspired, in both appearance and demeanor, by Harris Milstead’s drag stage personality, Divine .

Ursula may be the most powerful magician of all the mer-people. King Triton’s magical trident is the only thing that’s more powerful than she is.

Furthermore, magical deals signed by willing participants are powerful and binding. Even powerful beings like King Triton cannot undo them. Ursula often relies on this rule by trapping the naïve or desperate using skewed contracts.

Even though Ursula is a sea dwelling creature she is amphibious, breathing air as well as water. Even though she’s a mermaid a unique mutation gave her octopus tentacles instead of fins.

Ursula has two large, intelligent, moray eels to do her bidding. She may peer through their eyes with a spell and see whatever they see.

Her lair lies within the bones of a long dead monstrous sea creature. This is is where she maintains many undersea ingredients to create her potions and rituals .

The garden in Ursula’s cave is made up of people who crossed her. She used a spell to transform her enemies into a plant-like form whose face somewhat resembles her victim’s original face. The horror on those faces reveals that they are fully aware of what has happened to them.

Once Ursula was slain all her con tracts ended and these victims returned to their natural forms.

Ursula once lived in Triton’s Palace, and helped organize the celebrations. Apparently she made some attempts at “elevating her station in life”. That is, she tried to usurp her brother the King. As a result, she was forever exiled.

Over the years, Ursula has become somewhat of a hermit. Her only friends are two surprisingly competent moray eels.

The mer-people of Triton have assigned Ursula a respectful mystique. They see her as a reclusive witch, powerful but dangerous. She can perform miracles if you can pay her price.

Ursula kept a close eye on Triton’s kingdom with the help of her pets. Thus, she noticed that one of Triton’s daughters was more adventurous than the others. As she watched she learned what this daughter desired. 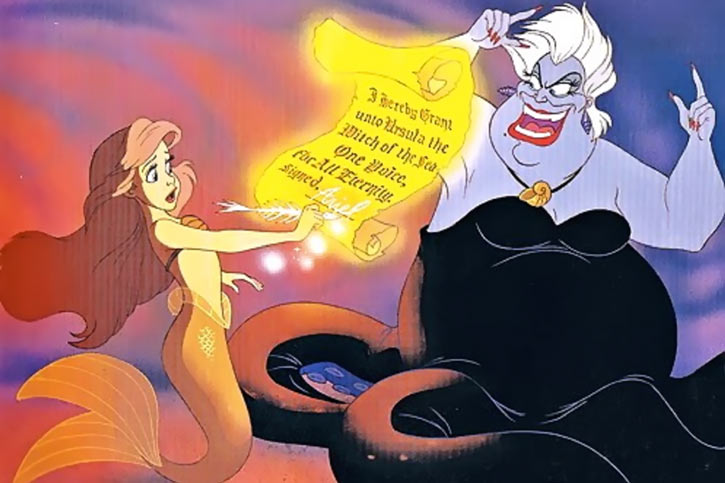 Ariel was her name, the youngest of Triton’s daughters. Ursula learned Ariel was in love with a human Prince. She wasted no time and sent her eels to intercept and beguile her. They did the trick and brought the rebellious teen to her lair.

Ursula offered to turn Ariel into a human, she could try to “catch her man”. But of course, Ursula’s deals are always for her own gain. And thus, she made the task nearly impossible. She gave Ariel three days to get true love’s kiss. If she couldn’t the consequences would be severe. As an ace in the hole, Ursula demanded Ariel’ s beautiful voice as payment.

Ursula continued to watch Ariel’s progress. Thus, she was greatly perturbed when the girl nearly got the kiss on the second day! Ursula would leave nothing to chance. She used her magic to change herself into a young human woman. She then entranced the Prince, using Ariel’s own voice to draw his attention.

And it worked! The next morning Ursula, in her “Vanessa” alter-ego, had Prince Eric demand a wedding the same day before sunset. Ariel overheard and ran away weeping.

Return to the sea

When Eric’s ship pulled away from the dock, Ariel felt defeated. However Scuttle, Ariel’s seagull friend, saw the disguised witch’s reflection in a mirror. He informed Ariel and friends.

They made a valiant attempt at stopping the wedding and the witch. But just as it seemed Ariel would get true love’s kiss, the sun sank below the horizon.

Ursula cackled with delight when Ariel was returned to her mermaid form right in front of the Prince. She grabbed Ariel and dragged her down to her undersea lair. But she soon found herself confronted by King Triton himself.

However, King Triton was powerless before Ursula. He had come to offer himself for his daughter, which was what Ursula wanted all along. She now had the crown and trident. And the mighty Triton was only a withered part of her garden. 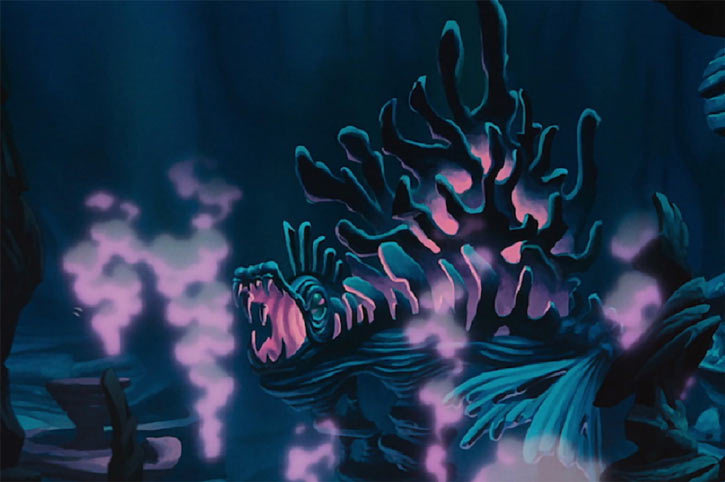 Ursula became mad with power. She used the trident to grow to colossal size so she could rule the whole of the seas. Nothing could stop her.

Yet Prince Eric suddenly steered a sunken ship, brought to the surface by Ursula herself, towards her. The vessel impaled her. This undid all of Ursula’s spell and freed all of the victims of her garden.

Ursula is an overweight mermaid with a unique and notable mutation. Instead of a fish tail, she has octopus tentacles. She is blue skinned with a beauty mark (a black mole) on the right side of her chin.

Ursula appears to have been a socialite during her time in the Palace. She wears heavy makeup, a golden nautilus shell necklace and large purple shell earrings.

She wears what looks like a black strapless evening dress. But it actually flows into her tentacled lower body, so it appears to actually be part of her body.

Over the top drama queen! It’s prevalent in her language as well as her body language. She’s spiteful and vicious holding her exile as a badge of honor. 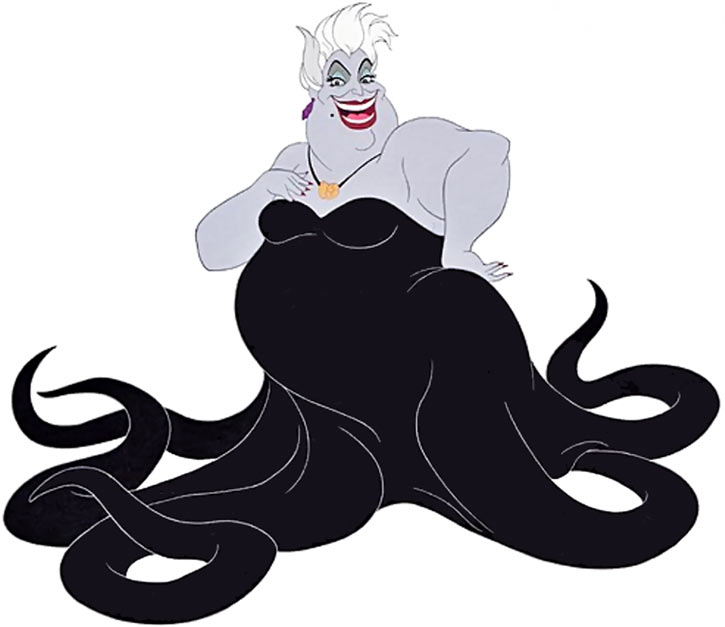 When she has guests she will put on quite an extravagant show. She’ll begin low key, even turning her back on her guest to draw them in. Then the “show” begins and she’s on! Twirling and swimming about and yes, she will likely break into song.

When she feels wronged, which is anytime she doesn’t get what she wants, Ursula becomes petty. Which also means a lot of sharp and sarcastic remarks.

“Yeeeees, hurry home, princess. We wouldn’t want to miss old Daddy’s celebration, now, would we ? Huh ! Celebration indeed. Bah ! In *my* day, we had fantastical feasts when I lived in the palace. And now, look at me – wasted away to practically nothing – banished, and exiled, and practically starving, while he and his flimsy fish-folk celebrate. Well, I’ll give ’em something to celebrate soon enough. Flotsam ! Jetsam ! I want you to keep an extra close watch on this pretty little daughter of his, she may be the key to Triton’s undoing.””

“Ah… no, no, no. I can’t stand it, it’s too easy. The child is in love with a human and not just any human, a prince ! Hahahaha… Her daddy will love that. King Triton’s headstrong, love-sick girl would make a charming addition to my little garden… hahaha.”

“Come in, come in, my child. We mustn’t lurk in doorways. It’s rude. One might question your upbringing.”

“My babies…” (Genuinely grieved over the death of her minions)

Ursula can be inserted as is into the DC Universe.  She would be an exile of the King of Poseidon/Tritonis (Atlantean Mermaid City) in place of Triton.

Rituals:
Ursula has memorized all of the listed rituals.

Eye of the Cat Water Bubble
Effect: Eye of the Cat: 15
Bonuses and Limitations: Eye of the Cat allows for Visual and Audio, but only through Flotsam and Jetsam’s eyes (-1).
Casting Time: 00
Necessary Components: None.
Special Restrictions: Must be cast underwater.
Comments: Ursula used this spell several times.
Cost: 30

Casting Time: 03
Necessary Components: 04 APs (Ursula tossed in several stoppered bottles of ingredients.)
Special Restrictions: The voice must be retained in some container. Ariel’s voice was placed inside Ursula’s nautilus shell necklace.
Comments: Large green spectral hands reached into Ariel’s throat as she sang and drew out her voice as a small glowing orb.
Cost: 38

Mermaid to Human – Transformation spell
Effect: Transform: 12, Attractive.
Bonuses and Limitations: Humanoids allowed (+1 FC) and may be made permanent or for a set time (+5). The caster may dismiss the transformed state at will. The target’s true self is revealed from any mirrored surface (-1).
Casting Time: 01
Necessary Components: None.
Special Restrictions: None.
Comments: This spell came right on the heels of the “steal voice” spell. Ursula used this spell again on herself to take the form of Vanessa.
Cost: 109

Flotsam and Jetsam are a pair of large, intelligent moray eels. Each have one white eye and one yellow eye, opposite each other. When Ursula uses her Eye of the Cat spell to view through their eyes their white eye will glow a dark yellow.

(Spoken in unison and finishing each other’s sentences.) “Poor child… poor sweet child. She has a very serious problem. If only there was something we could do… but there is something.”

Flotsam and Jetsam (they have identical stats)

Ursula could have the Altered Anatomy Drawback since she is unique even among mer-folk. Although it would only be for her lower half and may not be different enough from the normal mer-person to warrant the drawback. So, I have left it off this writeup.

Wealth is not revealed in any capacity, however, Ursula does use components in her spells. These must have a value, so, I’ve ball-parked it at 04 APs and gave her a Wealth score to match. 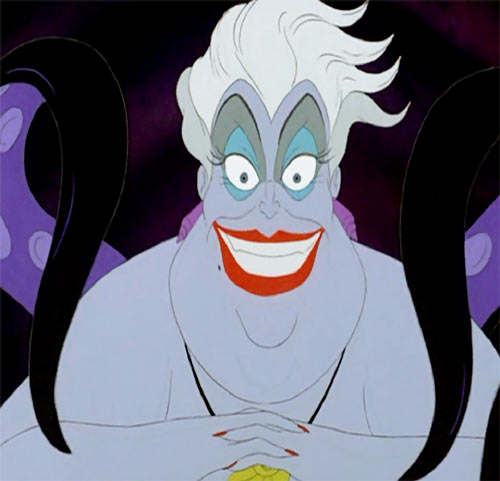 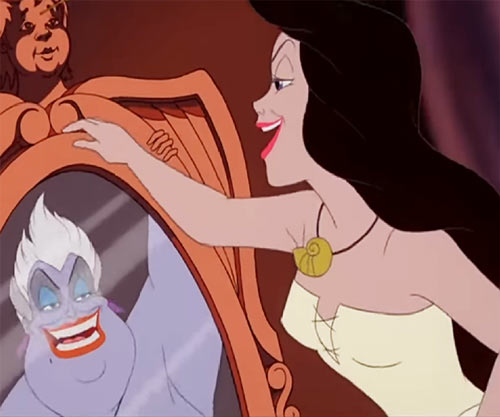 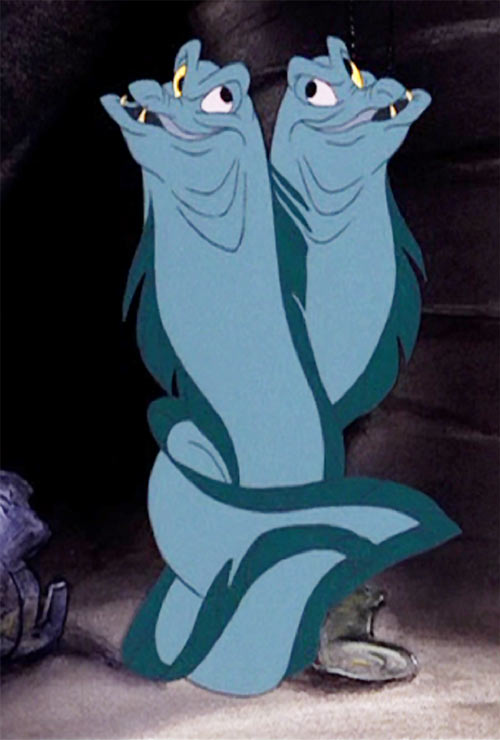 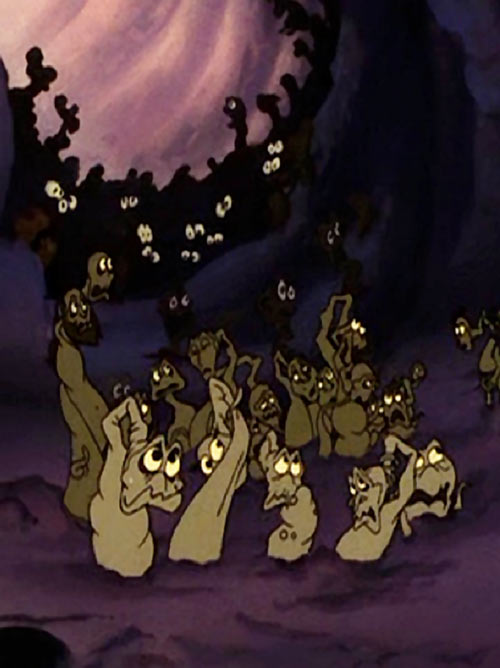