The U.S.Agent has been Power Broker enhanced. Thus, he is superhumanly strong, fast, durable and agile. Combined with his superb physical training (he learned Captain America’s fighting style from the Taskmaster), that makes him a powerful combat machine.

The U.S.Agent has twin photon shields on his wrists. They can be used to form force shield, or the energy can be released in an energy blast. This weapon was designed by Stark and was specific to his stint as a Force Works member.

Walker lived to join the military ever since his brother, a Huey pilot, was killed in Việt Nam. After his tour of duty, he found out about the Power Broker and was physically enhanced.

Unlike most, he did not become a wrestler, but was involved in a patriotic scam. He set himself as an all-American public vigilante, the Super-Patriot II. His rep was increased by numerous PR stunts, including challenging Captain America (Cap turned down the challenge). He engaged in several violent xenophobic actions, but also disarmed a terrorist nuke in Washington; D.C..

A new morning in Captain America

Since Captain America resigned at this moment, the government asked Walker, who seemed an ideal choice, to become the new Captain America. They gave him a costume and shield, trained him in fighting and set him up as the nation’s own personal soldier.

For the public, the lies continued and it was still the same Captain America as before (a trick that had been pulled several times in the past).

Just like Jean-Paul Valley to Batman, the new Cap was meaner, more violent and less in control than his classic predecessor. He was involved in a ideological struggle over right-wing American values, in which his parents were killed by a fascist militia.

The murder gradually unbalanced him, making him prone to murderous rages. It was revealed that the Red Skull was behind all this, and Walker and Captain America fought against each other and then against the Skull.

Walker convinced Captain America to take back the mantle. John then went through the building of a new identity, including his faked assassination. He used the “Captain” costume that Captain America had used during his leave of absence and was code named U.S.Agent, a US government operative.

He later joined the West Coast Avengers as part of the government control over that organization’s. This caused no end of unrest within the group. The team did not welcome their ruthless new member, and Hawkeye temporarily quit the Avengers in protest.

Although the Agent and the Avengers have never grown to like each other, they have accepted each other as time has passed.

Later the US Agent found out that he has been brainwashed and sought out the ones responsible to restore his memories. Eventually the government no longer wanted him and he was give his freedom. Without government backing to be on the team when elections for new Avengers were held, he only received one vote causing him to leave the in anger.

Later Daniels has also mellowed considerably, and deeply regrets several of the deaths he caused. Hence, even after the Avengers reorganized itself under United Nations auspices, the U.S.Agent continued to serve as a member until the Avengers West Coast was disbanded.

Upon the disbanding of the Avengers West Coast Division, he was invited to join Iron Man’s new team, Force Works, and was outfitted with a new costume and photon shield replacing his old utilities which he dumped into the ocean.

Agent served as the backbone of Force Works, since he was highly motivated. However, after the Crossings event, the team members went into a sabbatical and never came back to the Works.

U.S.Agent next appeared leading the Jury who were hired by Edwin Cord, President of Cord Industries.&emsp.The Jury was to capture the Thunderbolts, now headed by his brother-in-arms team mate Hawkeye. Walker was then back to his original uniform and sporting a new shield. Since his team was not as experienced as the Thunderbolts, they were defeated.

Agent butted heads with Edwin Cord when his team was not permitted to aid in the Graviton situation. Cord argued that he was not Anthony Stark and that their funding was for the capture of the Thunderbolts only.

Agent next met Hawkeye’s team when he was contacted by Citizen V and fought along the Thunderbolts in order to defeat the new Secret Empire. In the aftermath of the battle Agent’s team stayed to deliver the Empire into police custody while the Thunderbolts took off to catch the escaping elite members of the empire.

On a subsequent mission Agent was severely beaten by the super-soldier known as Protocide. He was saved by S.H.I.E.L.D agents and was even given enhancements.

Lastly he was hired by the Commission to spear head a new government team called S.T.A.R.S., with the position of a super-human marshall.

Agent was instrumental in ending the Maximum Security threat posed by the newly evolved Kree by rounding up most of the aliens that were stranded on Earth and rallying them against the Kree. As a S.T.A.R.S agent he wears a Judge Dredd type uniform and uses a large array of hi-tech weapons, armor and gadgets.

At 6’4” and 270lbs, the U.S.Agent can be described as massively athletic. He wears a black skintight costume covering his whole body save for his face, with a red belt, boots and electronics-laden gloves. He has a large ring of white around his shoulder an upper chest, and on the heart a small emblem reminiscent of Wildfire’s.

John Walker is an All-American fighter. He acts in a direct, simple, violent way, without asking himself too many questions.

He is very patriotic, and it is obvious to all that he’s ex-military. He applies his hard-nosed, no-nonsense, by-the-book approach to everything, including social interactions, which tend to make him rough and tactless (the term “jerk” comes to mind).

He is not a likable man, but his courage and strong loyalties compensate that. Well, provided you’re far more tolerant toward him than he is toward everyone.

While he’s extremely patriotic, he’s hardly the pillar of integrity that Steve Rogers is. He’s politically ultra-conservative, and is a member of the extreme right wing of American politics. He’s also argumentative, and stubbornly believes he knows best at all times.

Of course, you could just use U.S.Agent as a basic super-agent for the U.S. government and be done. That would fit : Walker now has few similarities to Captain America, and could easily exist in a world without Cap.

But looking at DC‘ Cap analog, General Glory, perhaps U.S.Agent is an attempt to duplicate the General’s position, “without all that mystic mumbo jumbo”. Then Walker would just be the latest in a series of agents, trained by the same military conspiracy that covered up the General’s disappearance.

He’d have been used in covert operations over the last four or so decades – Berlin, Mekong, Dallas. Walker, learning the truth – perhaps from Glory himself ? (or maybe Agent Liberty) – then goes rogue. Or maybe he doesn’t care, and remains in the UN sanctioned JLI “just to keep an eye on things…”)

Or… just to get weird, Agent isn’t ignoring the “mystic mumbo jumbo”. The conspiracy that backs him is the National Interest, from the pages of The Spectre. Agent’s techno-goodies are the result of studying the sorceror “Robot”.

Agent himself is an attempt to tap into the “iconic nature of America” the way both Uncle Sam and General Glory do/did, and bring that power under the control of the National Interest.

In this case, agent’s costume would return to the red, white, and blue rather than the black, and he would be constantly used for PR at schools and hospitals and whatnot, and be on every lunch box in America. If he can not be _believed_ into an icon, he could be _bought_ and _spun_ into one… 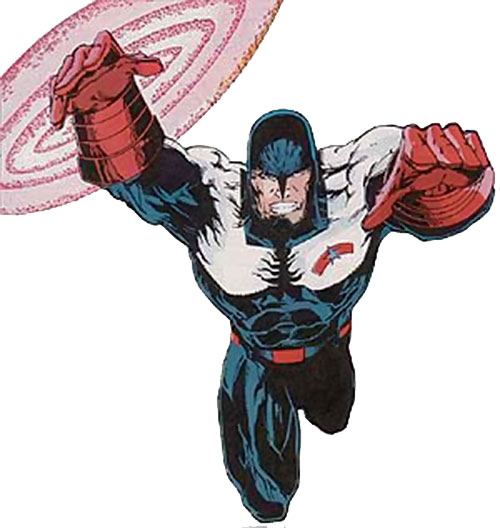 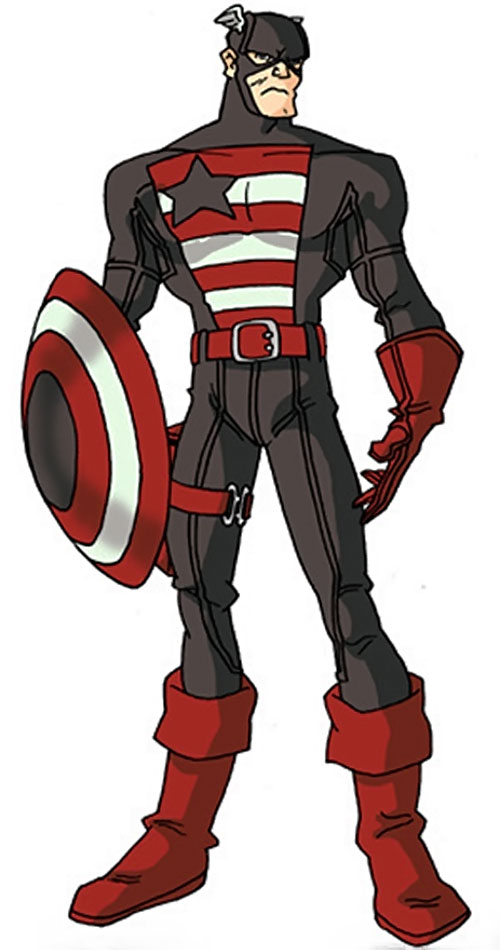 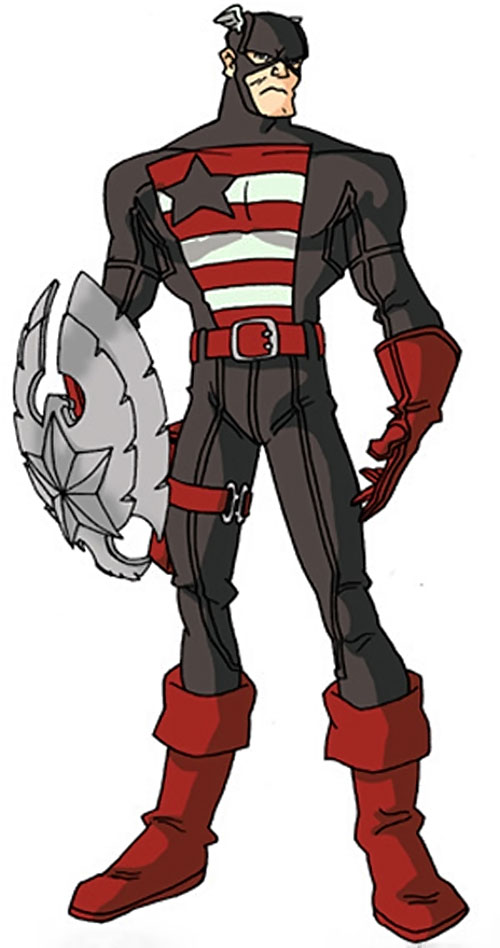 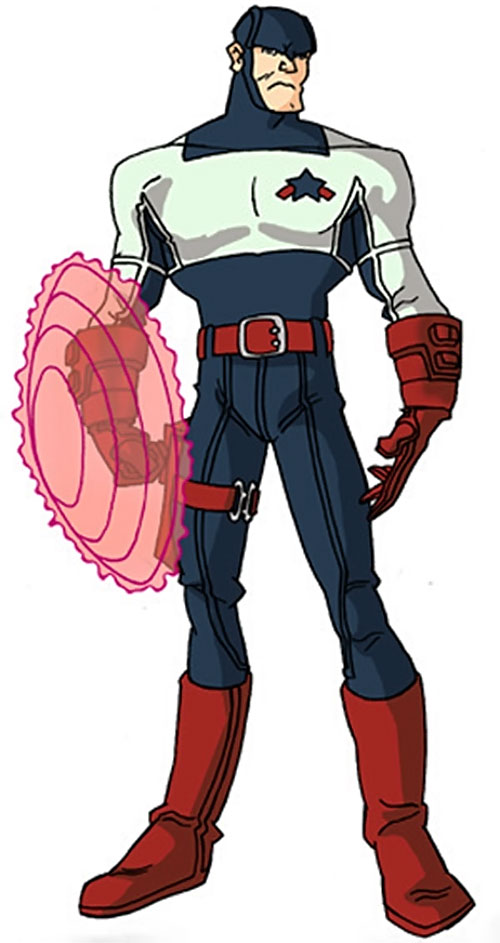