This profile is best read after :

The Dragon Age setting was created much like a Dungeons & Dragons campaign setting. Albeit by professional writers, and with an emphasis on grounding societies and religion in history.

Thus, Utha is a D&D-style Monk, level 12 or so. With the fancier abilities removed, since it’s more or less a low-fantasy setting.

Utha is a veteran Grey Warden. That makes her a resourceful fighter, and markedly more capable than an ordinary soldier.

This also means that she has extensive experience with long-range recon, commando raids and the like.

As a Dwarf, she can see better than a Human in low light.

Her life expectancy likely is a bit longer than an equivalent Human’s. But since she’s a Grey Warden that’s not relevant.

She also still has her Stone Sense. This Dwarven sense provides :

However, it seems that Utha’s Stone Sense isn’t strong due to the time she spent on the surface.

Utha is a former Silent Sister . As such, she amputated her own tongue. She is mute, and her sense of taste is greatly diminished. 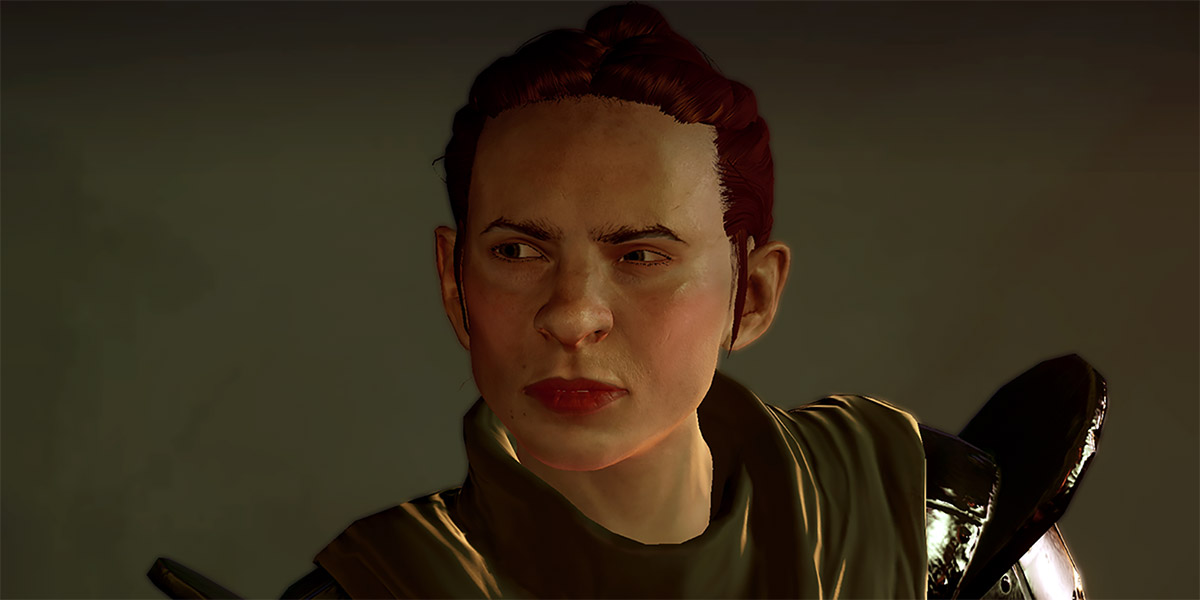 She is fluent in a sign language. Like with the common tongue, it seems to be a Dwarven-made language for international trade, which became the everyday lingo for most of its users.

All team members are fluent in this language. However, Duncan still lacks experience. So there are words he doesn’t know yet. And he cannot follow if Utha signs too quickly.

And now that I write about it I don’t remember Utha signing at Genevieve.

When Maric joined the team, a Warden — often Nicolas — would translate Utha’s words for him as necessary.

The way of the shattering fist

Utha is a mistress of a rare combat form. She normally fights unarmed.

These techniques seem to have been mastered by specific Dwarven Houses, which were mostly destroyed by the Blights.

Utha hits like a garbage mule. Her punches and kicks break bones. Many forms of body armour help little, as she can easily target unprotected areas.

Your average hurlock darkspawn has good odds against two or three ordinary soldiers. But Utha can kill one with two or three unarmed blows.

(The strength of her hits seem on par with that of a mace. It is thus *possible* that she’s wearing steel-capped gloves or cesti, which Maric — who narrates the scene — would perhaps not recognise.)

She occasionally uses a “double-club” – a nunchaku-like weapon. This seems intended for use against heavily armoured and/or huge opponents.

Utha is seen using spinning kicks, throws (to send an opponent sailing into other enemies), spear-hand strikes, neck-breaking manoeuvres, acrobatic dodging (such as a back somersault over a sweeping dragon tail), etc..

She’s short and with short limbs. But her rapid and precise leaps mean that it’s no hindrance.

In a typical engagement, Utha and Duncan are the security guys. They work behind the shock crew (Genevieve, Nicolas and Julien) to ensure the safety of the mage (Fiona).

Both Utha and Duncan are highly mobile and offence-heavy. They can thus intercept and destroy assaulters who have gotten past the shock troops. Or go after nearby ranged attackers and spell casters.

The Dwarf will also often be the one assisting Fiona when she gets too weak from spellcasting. Utha carries at least one emergency mana potion for her.

Utha is primarily protected by her speed and agility. Thus, in the none-too-likely hypothesis than an attack lands, she’s vulnerable. On the other hand, Grey Wardens have by necessity a high pain tolerance.

As a ghoul, Utha was sensitive to light. But her low-light vision was even better, and she gained a small healing factor .

There isn’t much data past that. As a ghoul she may share ground with genlock alphas.

I wasn’t gonna have music. But the subheadings in the History section came naturally, and with obvious consequences.

Utha likely is from Orzammar. She still has her Stone Sense, so she presumably isn’t a surfacer.

Her dad seemed to be a scholar (perhaps a geographer), and her mum a hausfrau. Utha had a brother her age, and an unclear number of much younger siblings.

However, her entire family was killed during a darkspawn attack.

Utha spent years with the Silent Sisters. These are a hardcore, all-women Dwarven fighting order.

All Sisters cut off their tongue in imitation to their founder, Astyth. Who had done this as a protest against the refusal of the Dwarven military to listen to women.

Astyth famously entered the Provings arena without weapons or armour, to attest of her martial worth. Since Utha fights in the same way, it is likely that the Silent Sisters maintain an unarmed combat school.

However, most Sisters fight using conventional equipment. Since Utha eschewed those, it is possible she’s considered a hardcase even among the Sisters.

Come crashing in into my little world

In 9:10, Utha was detailed to a commando of Wardens. It was led by the new Grey Commander of Orlais – Genevieve, Bregan’s sister.

The core of the team were old hands and old friends – Genevieve, Utha, Nicolas and Julien. Plus two more recent recruits, Fiona and Duncan.

The goal was to locate a captive Bregan, inexplicably held captive by the darkspawns.

Feelings are intense, words are trivial

The team did reach a Dwarven ghost city, the Ortan thaig. 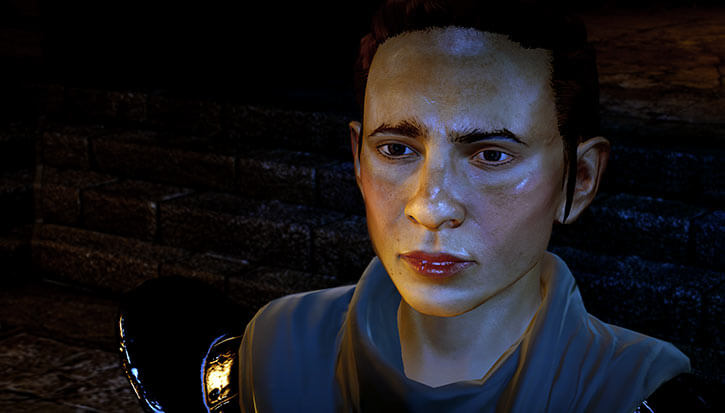 This was a deeply emotional moment for Utha. Her ancestors had lived there before fleeing to Orzammar.

She even located a home bearing the sigil of her family. About it were remains of fighters that likely were her ancestors.

(Ancestors are a very important part of Dwarven culture. They are the basis for their non-theistic  religion).

All I ever wanted all I ever needed

Through great opposition and hardship, the elite team did locate Bregan. However, the former Commander had allied with a mutant darkspawn calling himself the Architect.

They had a plan to — allegedly — end the Blights forever. They sought the help of Grey Wardens.

Utha jumped at this chance. To her, ending the Blight was worth almost any cost or risk.

She thus volunteered to be turned into a “ghoul” – a person overtaken by the Taint.

Painful to me pierce right through me

Utha, Bregan and Genevieve accompanied the Architect to the Fereldan Circle of Magi. This was part of the Architect’s precarious alliance with First Enchanter Remille.

When the situation there blew up, Utha fought at the Architect’s side. They narrowly managed to survive and exfiltrate. The pair retreated into the Deep Roads.

Samples of Utha’s Grey Warden ghoul blood were instrumental in the Architect’s creation of the Disciples. These were a new kind of darkspawn. Disciples were free from the Old Gods, albeit with mixed consequences.

The Architect’s plans ran into another major snag. This resulted in the 9:31 Amaranthine Conflict.

Utha fought firmly on the Architect’s side. She also witnessed his attempt at reopening channels with the Grey Wardens.

These attempts turned sour once Warden-Commander Tabris learned that the Architect’s experiments had caused the Fifth Blight.

Blaming him for the death of her daughter, Adaia Tabris flew into a blood rage. She slew both the Architect and Utha.

(Will likely add details once our master playthrough has been through DA:O-A. — ed.).

Utha has a big mane of coppery hair. These are normally done as a braid, reaching her mid-back.

The facial features of most Dwarves look a bit as if they were hewn from stone. Utha’s are less angular. Humans and Elves thus tend to find her facial expressions more relatable than most Dwarves’.

Utha is stocky and muscular. She moves in a calm and deliberate manner. When at rest, she might stay completely still. Even in combat she seems serene.

She wears a simple brown robe, with a Grey Wardens tunic thrown over it. We can assume that this is completed by tough leather clothes, fighting gloves and combat boots.

As with every Dragon Age: The Calling profile here, the portraits are original work using a character generator.

After Utha allied with him, the Architect accelerated the growth of the Taint within her.

Grey Wardens do not normally reach that stage, as they undertake the ritual Calling suicide/combat once the symptoms become too severe.

A person overtaken by Taint is called a “ghoul”, but they are not undead. However :

(The appearance of ghouls in the game, and especially Utha’s, do not match the novels’ descriptions. It’s presumably the result of 3D models and animation constraints.)

Utha is a kind and supportive person. These qualities become even more important given the shortcomings of Genevieve’s unempathic leadership. Utha is in some ways the heart of the team.

Kell, Julien and Nicolas are close friends. Utha also seemed to have been important in welcoming Fiona then Duncan to the team.

When a team member feels down, Utha will often put her hands on them in a comforting way.

Like many Dwarves, Utha suffers from a culture-wide trauma caused by the Blights. Losing her beloved family made things even worse. Utha lives in the shadow of genocide and possible extinction.

By becoming a Warden, she gave her life to fight against it. She feels very strongly about this.

As part of her lifelong mourning for her people, Utha is interested in rare Dwarven objects. Examining and preserving the craftsmanship, in a tiny symbolic way, brings the artisan back to life.

The Architect accelerated the Taint within Bregan, Genevieve and Utha. This was meant to fast-forward them past the point of unbearable mental contact with the Dark Gods.

They could thus be sane Ghouls, instead of suffering mental assaults for months.

However, Bregan eventually realised that his mind was slipping anyway. He was gradually giving in to rage, resentment and callousness.

It is thus likely that Utha’s personality was altered in the same way. Especially since she remained a ghoul for 21 years.

Bonuses and Limitations:
When subbing Martial Artist for EV, Utha’s blows can use the Blunt Descriptor.

Advantages:
Credentials (Grey Wardens, Medium), Familiarity (Grey Wardens equipment and protocols), Language (Sign language), Misc.: Dwarves are cut off from the Fade (as they do not normally dream).

Drawbacks:
SPR (mute, very little sense of taste), Misc.: As a Grey Warden she needs about 50% more food, has about a 30-year life expectancy after the Joining, and experiences nightmares caused by darkspawn activity (particularly during a Blight).

SPI highballed by one as a nod toward Monk mental resilience in AD&D.

Non-heroic BODY APs, as these characters remain vulnerable to a good blow.

This is a first stab at Dwarven Stone Sense. Will likely evolve if there are better descriptions of what a Dwarf perceives using it.

For the Stone Sense, a modified Area Knowledge would have been simpler. But having APs gives a clear Range, and allows for different levels between individuals. Here I’m assuming that she’s weaker than Dwarves who never lived on the surface.

(Which is based on the fact that the party only relies on her Stone Sense once, despite most of the story taking place underground. And on Varric’s in-game discussion of his own Stone Sense).

When proposing more detailed stats for body armour, we raised their RV bonus against unarmed attacks. Since it was just too easy to punch out people clad in solid metal.

Then of course Utha does exactly that. But giving her a Descriptor-switching bonus takes care of that edge case in a simple way.

She might instead have bonuses to bypass Partial Coverage body armour. It’s workable too, as a Schtick.

Using her nunchucks raises her EV, but lowers her AV. Going unarmed is thus a more reliable choice against run-of-the-mill opponents. And her version doesn’t have the Enhanced Initiative APs usually seen in cinematic nunchaku.

The mana potion’s modelisation is based on Fiona primarily using Sorcery. Which is an artefact of her stats being based on a novel rather than a video game.

Writeup completed on the 8th of February, 2020. 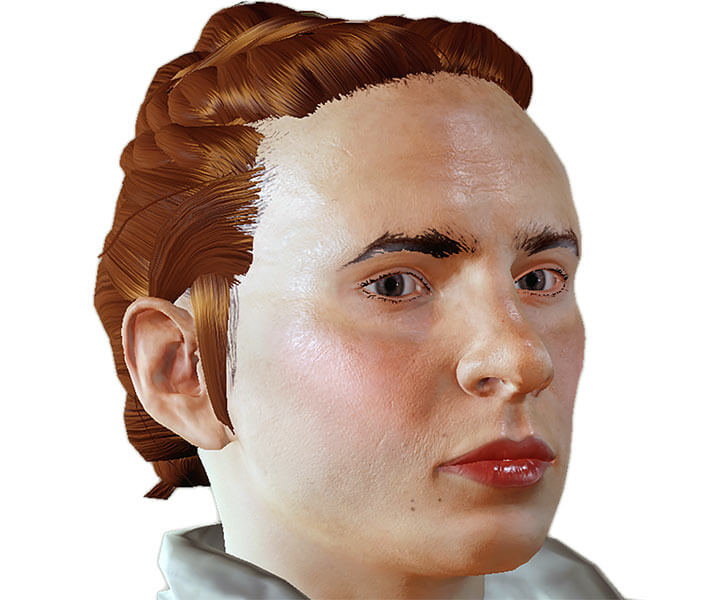