It was part of a wave of British works during the early Thatcher years, about life in dystopian and authoritarian societies. Its distinctive visuals, themes and complex narration made it a classic. This led to a successful movie adaptation in 2006. From there the Guy Fawkes mas V wears became popular in some activist circles.

V is extraordinarily intelligent, competent and fast. To most observers in his world, “inhumanly” is probably a better descriptor than “extraordinarily”. He can shear through armed soldiers with just a pair of knives, and could outmanoeuvre, outthink and bring down the whole government of the UK within but six years.

He has demonstrated great skill in such varied areas as chemistry, demolition, piano, singing, horticulture, or poisons. He’s very, very stealthy and can inflict fatal penetration wounds with his bare fingers – or render a man unconscious with a sort of “Vulcan nerve pinch”. In DC Heroes RPG terms, both are uses of Martial Artist EV with special effects.

V often silently Intimidates his opponent by appearing from nowhere and staying still for a second, letting his unnerving appearance and reputation (Mystique) sink in. He’ll then charge with a pair of knives and Multi-Attack.

In V’s world, the global economic and political situation seriously degraded circa 1984. Britain was trapped in a bad recession, and the shift from Conservatives to Labour didn’t reverse the trend. Labour did manage to get rid of US nuclear missiles on British soil, however, being pro-peace in an increasingly warlike world.

The Cold War quickly became hot. In 1988 there was a nuclear exchange. It was mentioned that mainland Europe and Africa were “gone”, although parts of Russia still seemed inhabited.

After the war, Britain soon sank into chaos. Armed gangs roved the streets and tried to control food and other key resources. The government had melted away, and except for some strong gangs and warlords, authority vanished in a blink. This situation lasted for four years. Then a strong Fascist movement rose to power..

The Fascists, calling themselves Norsefire, re-established order in the streets. They seized most minorities — Blacks, Asians, homosexuals, progressives, Jews, etc. — and sent them into death camps. 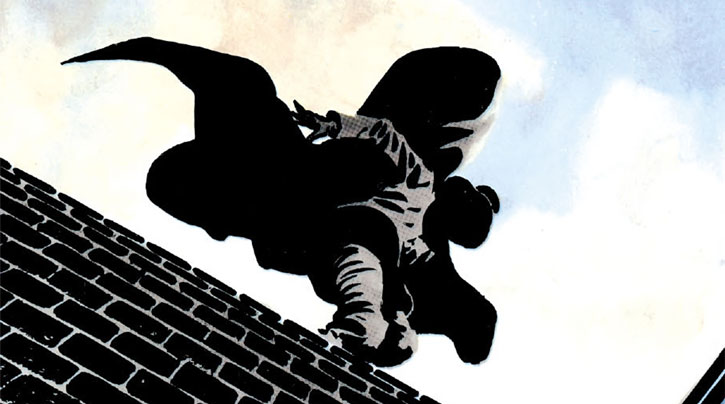 The new government was united behind the Leader, who relied on a powerful computer system called Fate to administer the nation. Multiple secret polices served the Leader – the Ear, Eye, Nose and Fingers.

With the technological level of the pre-war years recovered within months, the citizens found themselves heavily watched, monitored and infiltrated by the police. All phone conversations were tapped, and a dense network of cameras filmed everyone. The state also managed the weak existing alimentary resources. It deeply associated with the Church to ensure maximal societal control.

In at least one death camp, experiments were attempted on human subjects. These included a highly experimental hormone treatment. Nearly all of the subjects were killed. Most died after having been driven to insanity and/or partially mutated.

Only five survived for a significant amount of time, in prison rooms numbered from I to V. The subject in room V was not grossly bodily deformed – though it was mentioned his face was awful to look at. However, he was in some state of permanent schizophrenic fugue.

He became possessed of a strong charisma, an inhuman gaze looking at people as if they were insects, and a strange, hard to understand intelligence. The mutate  asked for various jobs within the concentration camp, such as horticulture. He produced amazing results. This led the fascinated researchers to allow him more freedom so they could observe his doings.

For non-British readers, his is a traditional Guy Fawkes  costume. It is patterned after the saboteur who attempted to blow up Westminster using gunpowder in 1605.

To the end V’s face remained unseen. There’s a good chance that he was Black, Asian or otherwise a visible minority. But he could have been sent to the camp for his politics, or his sexual preferences.

V’s symbol — a reversed V in a circle — is close to the usual symbol for anarchy, without the horizontal bar through the “A”.

V is defined by his anarchistic beliefs and his insanity. He is mysterious and abstruse. V almost always talks in quotes, parables, references and metaphors. He’s thoroughly inscrutable. His reasoning is often quite hard to follow, and his plans unexpected.

V upholds the Theatrum Mundi  concept. Thus, he often acts in a very theatrical way, delivering dramatic lines from the classics (especially the English classics) and famous British art such as the Rolling Stones’s hits.

V considers himself to be the guardian of the pre-Fascist culture and of the UK’s legacy to the world. As a result, his Shadow Gallery is packed with an unbelievable amount of books, records, etc. of all kinds, which he avidly reads and enjoys. Most works, especially by non-Fascists, have apparently been censored in the new Britain. 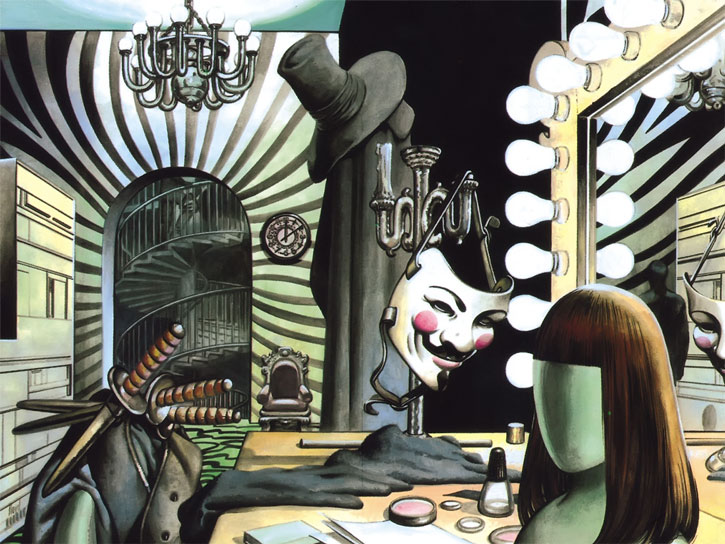 V is ruthless. He never hesitates to kill, slaughter, manipulate and trigger chaos. He is a true fanatic, and has even plunged people who considered him a friend into harrowing psychological and physical torture to make them discover what “true liberty” is.

He’s certainly not a good guy. He’s more akin to an elemental force. Viewing V has a ruthless, evil terrorist or as a genius-level freedom fighter are both defensible, yet both are probably missing the point of this formidable enigma.

V sees an anarchist’s work as a sort of Shiva. First destroying the old order, then letting humanity rebuild a voluntary, consensual order upon the ruins.

V’s plans are intricate, and unfold with clockwork precision. He always makes sure he has formidable resources and a stacked deck before putting his machinations into motion.

“Please allow me to introduce myself – I’m a man of wealth and taste.”

“Bring me my bow of burning gold
“Bring me my arrows of desire
“Bring me my spear ! O clouds unfold !
“Bring me my chariot of fire
“I will not cease from mental fight
“Nor shall my sword sleep in my hand
“Till we have built Jerusalem
“In England’s green and pleasant land.”

V could exist on Earth-10, the parallel history dominated by Nazis. Though in the end either V or the Nazis must disappear.

Bonuses and Limitations:
Ultra vision only to see in darkness (-1).

V’s behaviour is surprisingly similar to that described in the Book of Magic as the Magician’s Code – although there’s nothing mystical about V.

He bears the source of his power without emotion (he insisted his face should not be revealed, even after death, so he would stay an agent of change and not a man), he never shared his secrets with anyone but a slowly trained and transformed apprentice, and he never revealed any of his “tricks”. Other aspects of his codified conduct are explained in the Personality section.

V didn’t have any equals, but his behaviour toward the woman from room IV indicates he would likely treat them with great, codified respect – again as per the Magician’s Code.

Source of Character: V for Vendetta comics. To be clear – this is *not* the movie version. 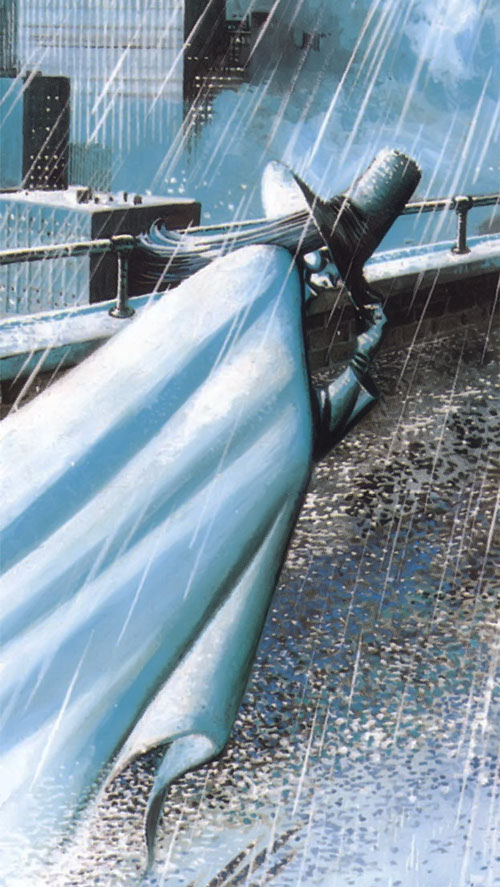 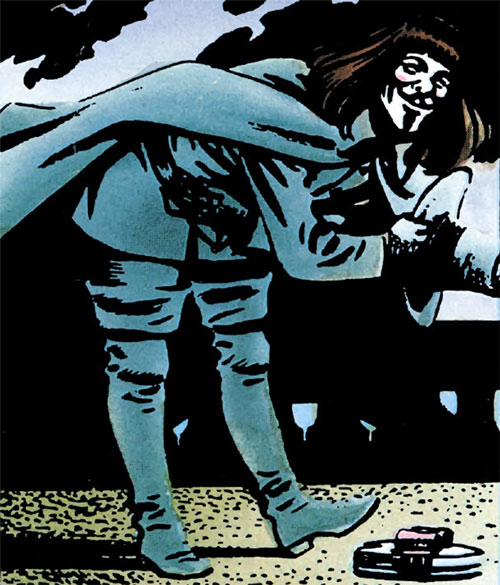 V escapes from his cell : 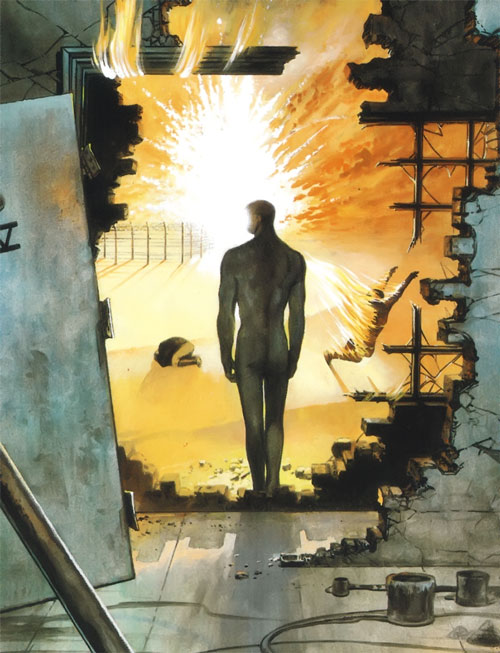