Samurai Champloo is a 2004 anime  series. It shares a lot of ground with the landmark Cowboy Bebop anime. Like Bebop was mixing science-fiction with jazz, Champloo mixes samurai with hip-hop.

The three core characters are an orphaned girl, an austere master of swordsmanship – and Mugen, a wild warrior.

As a personal anecdote, I’ve enjoyed this series on my laptop every time I’ve been abroad recently and so the writeups themselves, depicting Japanese characters, were written in the Ukraine and in Egypt. The series is pretty educational about old Japanese cultural concepts and life, and excellent language training for any prospective student of Japanese too!

(As sometimes happens, we have two takes for Mugen. This is Peter’s take, and the older one is Tom’s take — Ed.)

Having little else going for him, Mugen is a ridiculously good armed and unarmed fighter!

His fighting style is utterly chaotic and unpredictable. He often uses flashy moves that completely contradicts expectations, along with acrobatic moves. He can block incoming projectile attacks fairly easily. He relies only on pure instincts and reflexes and never fights with his head.

Extremely stubborn, he refuses to fall unconscious even when defeated by severe punishment. Oddly enough, as if powered by pure rage, he can throw objects (and his sword) extremely hard; hard enough to crush a tower by throwing baseball balls only. He once defeated an entire team of foes by just knocking them out one by one using a ball (in DC Heroes RPG terms one assumes he can use his Martial Artist as EV for such throws)!

Perhaps fittingly his name, Mugen, means limitless in Japanese. Indeed, he is VERY durable and tough.

The setting of Samurai Champloo

The story of Samurai Champloo is often believed — as was indirectly suggested in episode 18 — to take place during the Genroku era (1688-1703), a period during which popular culture flourished. This is often missed by fans, including myself, who believe the series to take place several centuries earlier.

According to some fans, the last few episodes are actually out of continuity with the rest of the show, which might explain the chronal discrepancies.

The episodes commonly include anachronistic elements of things that couldn’t or should’t yet exist in that era. For example:

Indeed, guns and rifles do exist of course but these are exceptionally rare in the series, but still of much better quality that what really existed back then. Much more common are explosives and bombs of different types, although these behave much like dynamite which had not yet been invented either (for example episode 13).

And in this universe, wasabi has disinfectant and preservative properties powerful enough to essentially make anyone regularly eating lots of it immortal (episode 22)!

Perhaps the entire series is set in a parallel universe which developed technology and culture at a slightly faster rate or just differently than on our world, even though it is clearly also meant to be educational about real-life historical Japanese cultural concepts.

Whatever the case, in a campaign featuring Fuu, Jin and Mugen anachronistic elements should be included like in the series – and even time travel seems a possibility to use.

The name of the show, “champloo”, is in itself a Japanese hip-hop term seemingly designing something like a free-style improvisation. Champloo can also mean cooking term to stir or mix roughly.

The spiritual predecessor of this show was the well-known Cowboy Bebop, infused with jazz-themed musicality. In Samurai Champloo the theme is instead hip-hop (well, and street culture: examples include butterfly knive katanas used by warring graffiti artists in one episode, and Mugen break-dancing as he fights, as well as cannabis as a plot point).

Furthermore, many events of the show are actually patterned after Carried by the wind: Tsukikage Ran , a series about a female samurai wandering Japan from 2003. Fuu-Chan also has many similarities with Ran’s female partner of that series.

Mugen was born on Ruykuy Island to where criminals are exiled. It has been described as an island like hell. His closest and only friends there were Mukuro and Kohza, and he had to kill lots of people just to survive.

After having been captured by government troops, he managed to escape by diving into a sea full of sharks, and from there eventually got to mainland Japan. In Japan, he started work as a sword for hire, and wandered from place to place.

After an incident lead to the death of a magistrate’s son, he was sent to the so-called Department Store of Torture with a wandering ronin named Jin, with whom he had started a fight earlier. The ronin was himself on the run from a school of swordmasters believing he had killed their master.

The two were helped to escape by a young girl named Fuu. Not having anything better to do, Mugen decided to join up alongside Jin to help Fuu-Chan look for a man only known as the Sunflower Samurai. The two decided to have their final duel sometime in the future instead.

After the Sunflower Samurai

The trio participated in many an amazing adventure (which won’t be told here: just watch the series!), often renting their services to anyone who would pay for them for protection, or any other odd job really. They eventually tracked down the Sunflower Samurai, whose real name was Seizou-San. Seizou-san was really Fuu’s father.

Following the Sunflower Samurai they arrived at a place where Mugen had to face his three worst foes ever while Jin had to face Kagetoki, the one who had orchestrated the death of his own master, Enshirou.

Mugen was cut up, blown up and shot as he took them all down. Lethally wounded, he decided to finally have that last duel with Jin, who had also survived his ordeal. Both started the fight, but they very soon fell unconscious due to their too extensive injuries.

When both woke up one week later, somehow still alive, they decided to finally… finally… be real friends.

Their quest to help Fuu-Chan find her father was thus completed as well as their own quests to find personal peace for the first time. All three decided to part company to continue their respective lives elsewhere only to someday meet again as fate would have it.

Mugen is a relatively thin and relatively young guy looking like a ruffian with unkempt black hair.

He wears steel-plated sandals, a simple red shirt and simple trousers along his fine sword, his only and most priced possession.

He often appears to have teenage stubble on his chin too, as he (and Jin) is perhaps 18-19 years old or so (with Fuu-Chan being 15 years old).

Mugen is a born survivor, but he is not too bright.

There is great darkness in his heart and he will often intimidates people by telling them that he’s from the Ruykuy islands. He believes in neither being a ruler nor in being ruled. His only practical belief is in his own strength and capabilities.

Mugen doesn’t know the meaning of impulse control and he is completely reckless and ready to die every single day. When faced with the most powerful gangs or enemies he just has to taunt them, insult them and challenge them. Thus he had a pretty d-mn intense rivalry with Jin and felt he had to kill him to prove that he’s the best.

Indeed, Mugen will kill an ally if getting in between him and an opponent, and he doesn’t really care about any hostages either. With his quick temper he always uses full force in combat without any restraints whatsoever.

Having very little code of honor (he is the complete antithesis of Jin), he will also rob other vagabonds that mess with him. He will also skip and run on food payments at restaurants and other establishments. He is also a thief, a gambling man and visits brothels. Well, he is practically an uncultured barbarian in every aspect.

He just loves a good fight which he too rarely gets. Of course he is not beyond fighting dirty. While the traveling companion of both Jin and Fuu-Chan, he carries no great love for either of them, and joined them just because he had nothing better to do. In fact, he has promised to one day kill Jin in a duel for, well, no other reason that to just prove that he is the best.

Little did he realize that their many adventures actually bonded them together into becoming true friends over time.

Despite many personal flaws, he sometimes does the right thing if properly motivated (the promise of food, money, sex or camaraderie). Mugen is like a chaotic force of nature, but he is sometimes a force for good.

“I could care less about your ‘common sense’! I’m not from around here. I was born in the Ryukyu Islands.” [a prison colony]

“Against you amateurs, I alone am more than enough.”

“It feels weird. Until now, whenever I found someone stronger than me, I wasn’t satisfied until I killed him. But I don’t feel like killing you now.” [thus finally becoming real friends with Jin]

“I don’t really have any secrets. But I’ve been getting into trouble since way back. Other than that… I prefer women with big tits. One place I traveled, I got into a fight and killed a really weird old man. He was like…” [showing a legendary crest] “So I was like ’I don’t care about something like that‘, and I killed him.”

“Hey, gimme your hand. Listen up ! You guys aren’t enough to take me down. I’ll give you ten seconds to bring those skilled guys. I’ll keep count by breaking this guy’s fingers. One (crack)… two (crack)… three (crack)… four…hmmm… this isn’t very entertaining. I’ll just break them all.”

[Facing execution] “Hurry up and do it. I don’t care if I go to Hell. Even if I’m alive, it’s like Hell anyway. But, I don’t want to be killed by you. I’ve lived by my own strength. If I’m going to die, I’ll get to Hell on my own.” [jumps into shark-filled sea, but survives and escapes]

Both Mugen and Jin would have been wanderers in old Japan.

Bonuses and Limitations:
Projectile Weapons requires a thrown object, such as a ball, to work (-1).

Connections:
Vagabond Ronin Jin (Low, or None, depending on their moods).

Assigning Mugen and Jin their respective Melee Weapons subskill score was very difficult. They are both – being equally skilled – at either 08 or 09 APs.

They are very often depicted as near superhuman in their combat prowess as they regularly cut down scores of trained swordmen with relative ease in seconds, or even other legendary swordfighters in a few turns (so probably no Schtick (Goonsbane)).

However, at least twice they have been SEVERELY outskilled by individuals who were likely at 10 or 11 APs or even a superhuman 12 APs themselves. During these encounters both Mugen and Jin clearly had to spend lots of Hero Points just to survive. I originally had put them both at 10 APs, but had to reduce these numbers due to such overpowering instances.

Putting them at 08 would force them to spend HPs in some fights, which is a healthy game balancing thing. And yet they too often seem to exhibit a pure 09 APs of subskill, which is where they are therefore in the writeups. Perhaps they really are at 8.5 APs.

If the GM believes that HPs should regularly and often be spent in the games, then reduce their subskill to 08 APs only (along with the Edge Schtick applicable to that Weaponry). Otherwise, a truly epic take – such as in this writeup – would have them at 09 APs. 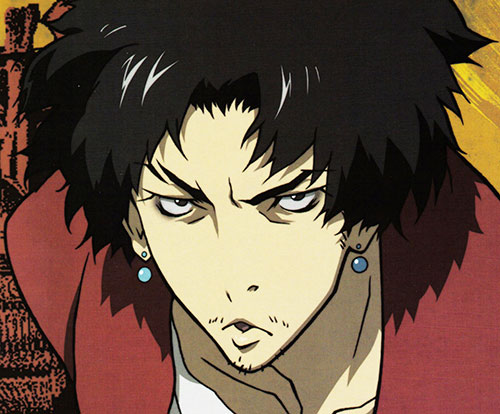 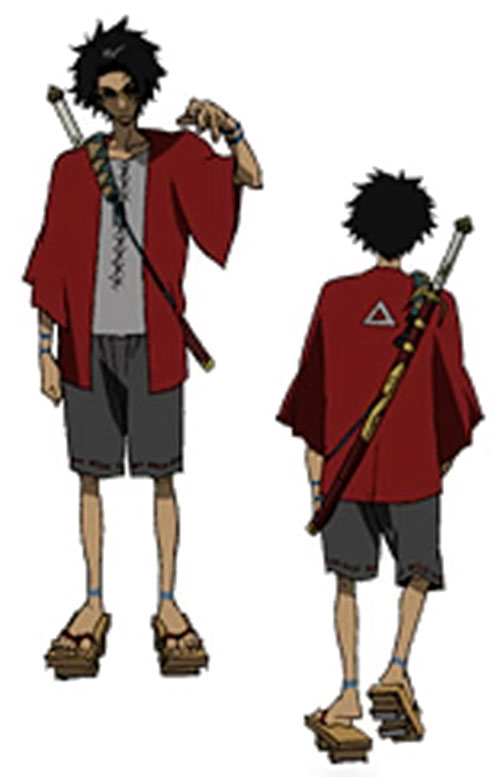