The Vahines are foes of Fantomah. Fantomah probably was the first super-powered comic book heroine, and was one of the features of Jungle Comics during the early 1940s. Yes, *all* the stories in these comics were about the jungle.

Fantomah was one of the creations of Fletcher Hanks, a… peculiar writer and artist.

The Vahines are brave, ferocious warriors. They are also remarkably lithe and agile, jump real high, and can retain their footing in any circumstances.

They come from a magical place (that was an Agents of S.H.I.E.L.D. joke ) and can prepare some semi-magical counter-measures against their opponents. 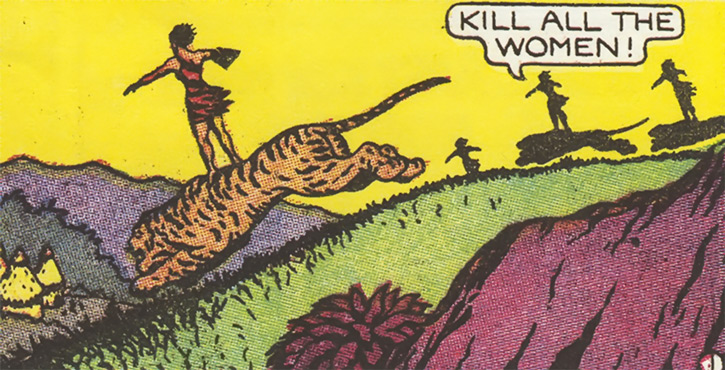 For instance when Fantomah sent the beasts of “the jungle” against them, they quickly doused themselves in glow-worm oil to look like glowing ghosts. This scared the animals into not attacking, even under Fantomah’s control.

They likely had other counter-measures such as curse-breaking gris-gris.

Their best, main and most visible weapon are their flying tigers. Each Vahine stands on such a beast. They don’t ride them conventionally – they stand on the tiger’s back on tip-toes. Somehow.

The murderous tigers fly swiftly. They seemed to do 60+ mph, and of course they can ignore the very difficult terrain in the jungle as they soar.

The Vahines are a small tribe of women living on Wildmoon Mountain, which may actually be a volcano. There seems to be 13 or 15 of them. Under the mountain lies a titanic, hollow moonstone (about 12 metres in diameter) with strange properties pertaining to gravity.

The moonstone is said to move. Presumably, it lies in a mammoth cavern underneath the mountain. The Vahines believe that such movements predict their destiny. They call it their “wild moon”.

Though the inhabitants of the jungle are usually depicted with Central African skin tones, the Vahines and the natives of a nearby village sport a coppery complexion.

Since on our earth “vahine” is a Tahitian word (also present in some other Polynesian languages, I think) perhaps the part of “the jungle” with Wildmoon Mountain is on the Western edge of Fantomah’s domain.

We’ll destroy all the other women in the world !

In 1941, the tiger-women erupted out of Wildmoon Mountain to raid “the jungle”. Their plan was to kill all the other women in the world, so as to gain global control.

(I’m not sure how it works, either. Maybe the Vahines are related to the Underpants Gnomes ).

Delicately standing atop their ferocious flying felines, they massacred the women of a nearby village. Fantomah responded by mobilizing the animals of “the jungle”, but the Vahines were prepared. They poured glow-worm oil on themselves, making themselves look like luminescent spectres – whom no animal dared attack.

This gave the tiger-women enough time to attack another village, killing even the baby girls. The irate Fantomah assumed her blue-skinned, skeletal form and magically cancelled the glow-worm oil’s effects. The nimble Vahines managed to escape the armies of animals for a time by brachiating. But they were captured by giant vultures grabbing them by the hair from treetops.

Fantomah had them flown back to Wildmoon Mountain, where she magically forced the wild moon to burst through the mountaintop. She phased the Vahines inside the moonstone, then used her magic and that of the wild moon to shoot it into space like a cannonball. The wild moon soon crashed into Mars at a terrific speed.

All Vahines had short hair and wore tigerskin mini-dresses and socks. You should try it, that look might work for you too.

Brutal and fanatical. They apparently worshipped the “wild moon”, believed that its every move was heavy with dark portents.

As it happens, there are others groups of tiger-riding wild women in Fletcher Hanks’s… œuvre. One of those lives in space and have helmet-mounted rayguns, so that’s cool.

Advantages
These are trained to ignore the Glow-worm oil. Crafty kitties.

Writeup completed on the 8th of September, 2015. 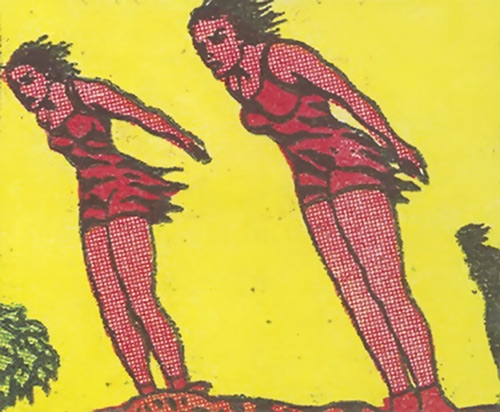