Vaï is a highly trained and experienced soldier and officer from the Legion. She has extensive special forces and police action experience.

She is also an astoundingly competent martial artist and knifefighter. Vaï remains undefeated in close combat. In close quarters her signature weapon is a custom-made trench knife — a combination combat knife and brass knuckles — whose appearance is similar to the M1918 American knife .

She also has the rare, recessive “shrinking gene” found in a small number of Imskians. This genetic sequence allows her to shrink down to the size of an atom.

Salu de Baï was part of the generation that never knew the peace and wealth of the early XXXth century.

She was born after the Great Depression of 2929, which nearly brought down the economy of the United Planets. Her home planet, Imsk, was hit hard. During most of her life Salu would witness the rise of the nationalistic, conservative, ultra-Catholic movements inspired by XXth century Fascism.

As a child, Salu was pathologically shy and reserved. She was unable to speak in public, including in the classroom. Her father hated this. He had hoped that his daughter could somehow work in show business rather than in Imsk’s heavy industry. Arno de Baï had been maimed in an industrial accident, and raising his good-for-nothing daughter on his meager pension was a serious strain.

After she turned 11, the stuttering, painfully shy Salu would disappear for days. She was unable to explain her disappearances, instead going into crying fits.

A sympathetic police officer determined that the young de Baï obviously wasn’t running away. He had her medically examined after yet another missing person alert from her furious father. Salu de Baï was suffering from a rare Imskian genetic disorder – spells of sudden, disorienting shrinking down to the size of a grain of sand.

This condition was derived from the genetic heritage of a small cadre of genetically-superpowered pioneers back in the days where Imsk was colonized. It was usually fatal. However Salu was actually able to navigate even when nearly invisible to the naked eye. She even could grow back to normal size with great effort. She was hospitalised for tests for the better part of a year.

This is my knife

Salu then turned 16 and the time for her military service came. Her infuriated father, seeing her abysmal grades at school, forced to volunteer for the actual combat military – instead of the usual non-combat heavy labour detail of most conscripts.

Imsk was at that time experiencing numerous skirmishes with space pirates. Conscripts were needed to man garrisons so professional troops and volunteers such as Salu could be deployed thorough the system.

Early on, de Baï was even more miserable in Imsk’s army. But the harsh discipline made certain that soldiers were just working hard and following orders, not speaking much or thinking. Which was sort of OK. She actually started to get decent evaluations as a soldier.

Once the military learned about her superhuman abilities (the highly chaotic Imskian administration being better at losing and delaying personnel dossiers than at processing them), she was moved into a marines company.

Her shrinking abilities had been deemed an obvious asset for boarding actions. Much later, de Baï dryly joked that she was so used to feeling terrified and lost that the bloody chaos and deadly confusion of boarding actions were nothing new to her.

The United Planet military doctrine stresses heavy cross-training for space action military forces. During one such training session with the military of other UP planets de Baï met Luornu Durgo. Durgo became her first real friend and the one person she could actually talk to without too much stuttering.

She and Durgo later got a simultaneous transfer from their respective planetary forces to the joint United Planets Peacekeeping Forces. In this corps she met several future Legionnaires, and was even wooed by none other than the super-soldier Ord Quelu, from Lallor.

… but this one is mine

However, on Imsk, a military coup was brewing. Many Imskian soldiers were recalled from the joint forces, including Salu. Her powers made her a potent assassin, but she was ultimately considered unreliable by the conspirators. The head of the future coup, General Bahemonde, had de Baï locked into a sensory deprivation tank for months.

Bahemonde’s first attempt at a coup failed. However, he had enough political clout to avoid being sentenced to prison. De Baï was rescued from her tank, but it was obvious that she was psychologically scarred from her months of arbitrary torment.

De Baï was drastically changed by the torture, and vowed that she never would be a victim again. She immersed herself in a brutal regime of physical training sessions, close combat training and combat simulation. She also applied for a Foreign Legion enlistment, wanting to break away with everything and, as is the Legionnaire’s wont, start a new life.

She enlisted under the alias of “Salu Vaï”.

My knife is my best friend

The strong discipline and esprit de corps  of the Legion were to her liking. They bolstered her new self-image. She passed the various training sessions to become a fusiller-commando marin. Amazingly, she soon joined the elite commando troops of the Deuxième Choc. These were a sort of cross between Airborne Rangers, Marines Force Recon and CIA hit squads.

She took command of her sentimental life, dumping Quelu and dating several men in turn. Such adventures included a dalliance with another legionnaire, famous sex symbol Dirk Morgna. After various disappointments, she gained a better understanding of her preferences. Salu started a relationship with fellow Deuxième Choc commando Ayla Ranzz, which continues to this day.

When civil war broke out on Imsk, most of the Army sided with General Bahemonde – but they faced an odd alliance of unions, Leftists, Anarchists, students and various anti-Fascists, many of those being off-worlders. Vaï, with her invaluable ability, was called back to the Imskian Army through diplomatic pressure.

It is my life

Vaï’s loyalties were torn during the war. Her sense of duty as a soldier was strong, but she suspected that her previous imprisonment and sensory deprivation had been the work of the junta and felt little sympathy toward Bahemonde and his clique.

This was compounded when a small number of soldiers, many of them friends from the Deuxième Choc took an extended leave of absence to act as instructors and field leaders for the anti-Fascists.

Vaï fought during the infamous battle of Guernica. It saw the deliberate targeting of civilians in an all-out war effort, in defiance of all UP regulations. The carnage was atrocious, and Vaï was severely wounded in unclear circumstances. It would appear that she gunned down a detachment of Dark Circle mercenaries working for Bahemonde while they were slaughtering civilians inside a church.

Vaï was tossed into the stockades for the rest of the civil war, which Behamonde eventually won. However she was freed by a daring commando raid of her Deuxième Choc comrades before they left the planet. They followed one of the laws of the Foreign Legion – never leave a Legionnaire behind, whether dead or alive.

Back in UP space, Vaï had the eye and leg lost at Guernica replaced by artificial ones. She refused to have the facial scars erased, claiming that she wanted to remember.

When the shock troops of the Deuxième Bataillon de Choc were forced to go AWOL, Capitaine de Vaï was one of the highest-ranking officers to join the mutiny. She naturally became one of the commanders of the renegade commandos. She’s still struggling in clandestinity, along with her comrades, so the legendary Foreign Legion unit can regain its honour.

De Baï sports short black hair and obvious facial scars. Her hair used to be kept in a buzzcut, but since the Legion had to desert it is merely worn very short so as not to attract attention.

Vaï wears a grey Legion uniform with RIMA markings and the Deuxième Choc patch. If she cannot wear a uniform she will usually wear sportswear.

Vaï is one of the highest-ranking officers in the Deuxième Choc who is still conducting field ops, along with Krinn. Thus, she often is in charge of operations. She is a confident, self-sufficient and very serious soldier and officer. She possesses an excellent understanding of modern military leadership.

She and the others have tackled numerous problems and won, with very little in the way of casualties. She is quite willing to engage very powerful opponents and high intensity, high risk situations with her fellow Legionnaires.

No longer stuttering and excessively shy, she still has the habit of thinking for a bit before she talks.

She often appears a bit cold or reserved – she noticeably lightens up when Ayla is present.

Vaï is married to the Foreign Legion like a nun to Jesus. It’s her whole life, and she knows everything about it – all the history, doctrines, traditions, cadences, instructions, anecdotes, flags, medals, etc..

Her hard-arsed, demanding leadership style is essentially a never-ending game of What Should The Legion Do ?. It is routinely informed by historical knowledge and doctrine derived from battles that took place centuries ago. 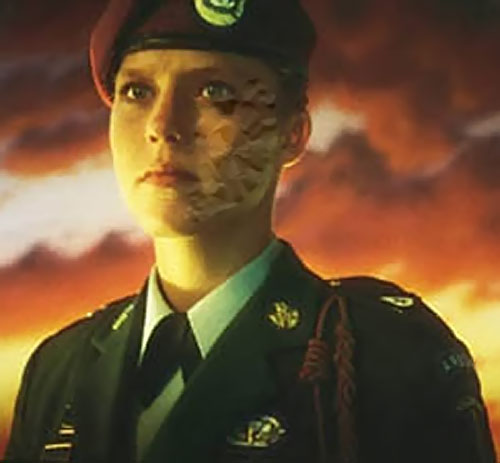