Valerian is super-fast, and seems rather experienced in the use of her power.

The Chimeran family has been the imperial family of the Chimeran Empire for generations. Their genetics have been constantly refined by all available means to tend toward immortality and godlike power. Those who are allowed to grow up thus have super-powers. They are collectively known as the Progeny.

At 76, Valerian is a middle child of the Emperor. She and two other members of the Progeny, including the probable successor of the Emperor, were sent to the ice planet Severan. They were to secure the genetic material of one Sara Janning. Janning was determined by the Emperor to be the missing link toward the ultimate evolution of the Chimeran genetic line.

The three succeeded where the regular armed forces had previously failed. They locked Janning in a medical pod so the Emperor could probe her mind through VR. But their captive woke up despite the super-heavy sedation and blew up the vessel, apparently killing all three.

Valerian is flippant and somewhat arrogant, but also quite competent.

She resents and envies her brother Aurelius for being the favourite, and feels she and Brok do the hard work while Aurelius get all the credit.

“Lucky you. You’ve got my father’s attention.”

Valerian would be perfect material for an alien invasion. Or any scenario requiring a cookie-cutter but visually interesting speedster . 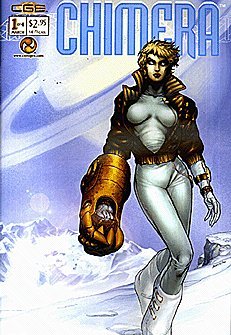