Much like his mentor Superman (Kaleb) Toral demonstrates much of the same range of powers as a Kryptonian . In fact Toral’s powers are even more similar to those of a Kryptonian than Kaleb’s.

There are noteworthy differences however. Toral also possesses Telekinetic ability, and the ability to control the air itself, aside from such old standards as super-strength, invulnerability, superspeed, and superhuman senses.

In his old life on R’hinn Toral was a skilled sculptor specializing in woodcarving. Since joining the Rebellion he has discovered a startling ability with technology and a great facility for invention.

Toral is also highly knowledgeable in the area of the legends surrounding the villainous Sovereign (who ages ago ruled R’hinn) and the hero Valor (who freed R’hinn from Sovereign). He could in fact almost be considered a Valorite, were he not committing heresy by their standards by calling himself Valor.

R’hinnite and other special considerations

To keep with the theme that Toral, like Kaleb, is a member of a species that, due to similar natural conditions of evolution, developed into beings that (like Kryptonians) possessed great powers under the light of a yellow sun I have chose to include two things in Toral’s writeup to enhance those aspects.

The first of these things is the artificial element R’hinnite, in Universe AZ this element was created by Emperor Luthor after reports reached him that Superman had rescued someone from the Krypton Protocol planet R‘hinn.

Currently Lex has only created the equivalent of Green Kryptonite. But it is entirely possible that he may eventually create a version of R‘hinnite that has effects similar to other forms of Kryptonite, please look at the Diverse Kryptonite drawback in either the Superboy or Sovereign (Universe AZ) writeups for more ideas.

The next consideration is that in the UAZ Kryptonians have a different experience under a wide range of Solar types, and IMHO, those species that are as similar as Hydrosians, Daxamites, R‘hinnians and even beings empowered by the artificial element Supremium [or another similar] (Supreme, Suprema, Fairchild etc) would share similar, if not identical, effects.

To that end, and to avoid reprinting the full text of the Kryptonian Solar Package Drawback (which is already in three writeups on WORG, Superboy, Sovereign, and Fairchild [UAZ]), I will just refer the reader to one of the aforementioned writeups (The Sovereign currently has the most polished version) and note here that Toral will share the same limitations.

Toral, or Valor as he is now known, was born on the planet R’hinn. Centuries ago R’hinn was conquered by the villain known as the Sovereign, who is an evil counterpart of Superman. It is unknown how long Sovereign ruled the planet but his reign outlasted the fall of the Viltrumite Empire. Finally Sovereign was defeated by the hero Valor who cast him into the Phantom Zone.

Upon regaining their freedom the people of R‘hinn rejected the technology that Sovereign had brought to their world and returned to a simpler way of life. They lived at peace for many centuries until they were discovered by the Luthor Imperium.

Luthor ordered the planet destroyed as it fell under the “Krypton Protocols”. The rebellion intercepted the message sending the orders and Superman (Kaleb) and a small team were sent to try to save lives.

The rebellion was unaware of the planet’s history and the effect that Kaleb’s S shield would have on the people of R‘hinn. Due to this they were only able to rescue one young man, Toral. Although Toral had some major issues with Kaleb at first the rebellion members were soon able to explain the facts of the situation.

Toral finally decided to join Kaleb in fighting the Empire, but he refused to wear the S, taking on the name of Valor instead of one of the “Super” names. Since then he has continued to fight alongside Kaleb and his fame has spread throughout the empire.

Toral is a slim young man who has black hair, blue eyes, and what would be described by 21st century humans as Caucasian skin tones. He likes to wear clothes in the style of his home world when not on a mission.

While acting as Valor Toral wears a red and black suit with short sleeves, fingerless gloves, and a blue cape.

Toral is a very serious young man who is devoted to overthrowing the Empire. He takes his responsibility as Valor very, very, seriously and he devotes much of his free time to investigating the truth behind the legends about Valor. Toral’s greatest joy is still making woodcarvings.

Advantages:
Area Knowledge (Imperial Space), Expertise (The Legend of the Sovereign, The Legend of Valor), Genius.

By Azrael and Roy Cowan.

Source of Character: Universe AZ, inspired by the Legends of the Dead Earth story from Superman: The Man of Steel Annual #5. 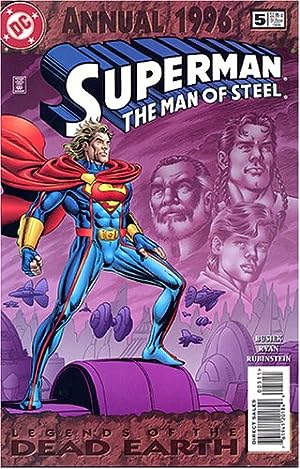 Superman: The Man of Steel Annual #5 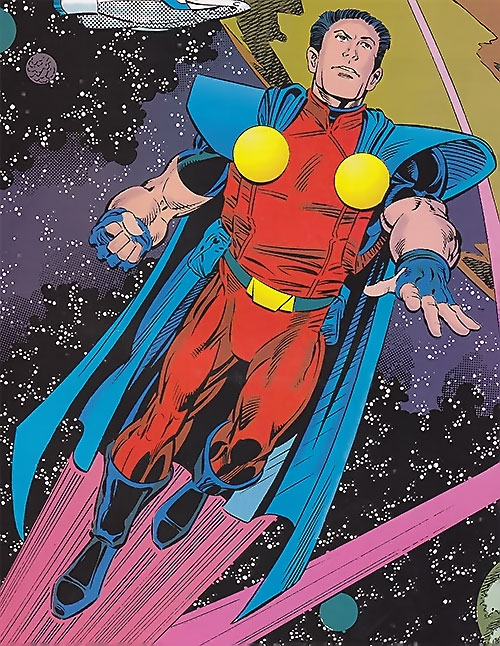