M’Onel possesses the powers and abilities of all Daxamites away from their red sun. He is extremely strong and tough, his reflexes and speed are super-human, and he can fly under his own power.

His senses are so refined he can see bacteria moving on human skin, read an Omnicom screen from 30 miles away and hear upper and lower frequencies than are humanly possible.

In the late 20th century, the Dominators led an alliance of planetary armies against Earth. Along with them went six observers from Daxam, a planet which orbited a red sun.

The Daxamites discovered on this trip to Earth that yellow sun radiation gave them powers of super strength, super speed, invulnerability, heightened senses, heat vision and flight. When the Dominator ship they were on was attacked by Earth’s heroes, they ventured out to encounter Superman. This is when they discovered a fatal allergy to lead, which is absent on their home planet.

When Superman saved their lives by removing them from Earth’s lead-laden atmosphere, they discovered the most important thing : who their true friends were. One of the Daxamites sacrificed his life to go back to the aliens’ base on Earth and send a signal to Daxam to support Earth in the struggle. This man was Kel Gand.

The dead man’s teenaged son, Lar, had always been interested in space exploration. But his father’s act now inspired him specifically toward upholding galactic peace. To this end, he joined the L.E.G.I.O.N.. This organisation’s leader, Vril Dox, concocted a serum to protect him from the effects of lead. It even allowed him to use his powers under a red sun.

However, his disastrous performance on his first mission and his altruistic personality, which made him a poor follower of Dox’s sometimes Machiavellian orders, led Dox to fire him. He went to Earth, the planet for which his father sacrificed his life. There, Lar acquired the name Valor in a super-hero career lasting several years.

It was during this part of his career that he disappeared from Earth for a while. Exactly what happened to him is still uncertain, but it is this period of Valor’s history that includes whatever exploits have made him a legendary, almost religious figure on many planets.

A skip in time

He was next seen on Earth dying of lead poisoning and amnesiac shortly after the events known as Zero Hour. He was found by a criminal named Gamboli, who decided to use him to fight Superboy for money.

The two fought, and eventually Valor regained his memory as he neared lead-poisoning death. Superboy attempted to get him off-planet in a spaceship, but it was destroyed. Now, the only way he could save Valor’s life was to place him in a time-stasis zone through a device he’d recently confiscated from a super-villain.

The attempt succeeded, but the device was destroyed. Valor remained trapped in there with no way out. He remained there, unable to interact with any other beings, for one thousand years. His presence there was unknown to all.

Then, during the Legion of Super-Heroes’ fight against Daxamite White Triangle terrorists, a huge power surge brought about a limited portal to the Stasis Zone, through which Legionnaire Saturn Girl saw him. Subsequent power surges made the contact stronger and stronger, until Valor was fully able to tell the Legionnaires exactly how he came to be trapped there.

Welcome to the far future

Brainiac 5 determined that they knew no way to reach the stasis zone. So in order to rescue Valor and give him the lead-poisoning antidote that he had invented several months earlier, the Legion made a trip through time to get Superboy to help.

With the aid of Superboy, the Legionnaires re-created the Stasis Zone portal and rescued Valor. But they did it secretly due to the socio-religious implications that Valor’s presence would have on the United Planets.

Valor attempted to stay out of sight. But emergencies usually brought him out of hiding, such as when Chronos brought down an entire wing of the Legion’s headquarters. After Chuck Taine’s reaction to him made him realize the degree of the problem his revealed presence would be, he agreed that he couldn’t go public.

On the orders of Cosmic Boy, he pretended that he just couldn’t stay cooped up inside Legion headquarters. He quietly left without telling anyone but Triad, who practically worshipped him.

This was a ruse, designed to keep secret a fact-finding mission that Cosmic Boy wished him to carry out. Valor, since then, also performed some good deeds incognito. He eventually joined Live Wire’s Legion rescue squad, which saved the Legion and the planet Titan from the Fatal Five.

With the Legion freed from limitations on their membership after the arrest of U.P. President Chu, Valor was invited to join the Legion.

Wanting to help the Legion’s good works, but also wanting to explore the galaxy, he accepted membership as a “detached service agent”. He also adopted the alias M’Onel, an ancient Martian word meaning “he who wanders”. This helped hide his identity somewhat, as his revealed presence would still cause an unwanted stir.

After Shrinking Violet, under the influence of the Emerald Eye of Ekron, sent seven Legionnaires back in time to the 20th century, he dedicated his time to tracking down Violet and the Eye. Unknown to Lar, the Eye wanted to possess him.

Since the Eye’s disappearance during the fight against Mordru, he returned to his explorations and wanderings. During his first trip to Daxam in over a thousand years, M’Onel learned that, unlike most Daxamites, his powers do not fade instantly under red-starlight, but rather, slowly fade over the course of an hour or so.

M’Onel is a strikingly handsome young man, with black hair and blue eyes. His costume consists of a black star field with red trim forming the letter “M”. His boots and wrist guards are gold, and his belt and cape are blue.

M’Onel is a hero through and through. Despite being trapped in the Stasis Zone and worshipped as a God on several worlds, M’Onel has maintained his sanity and his grounding. 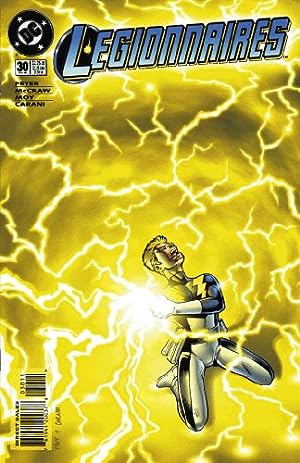 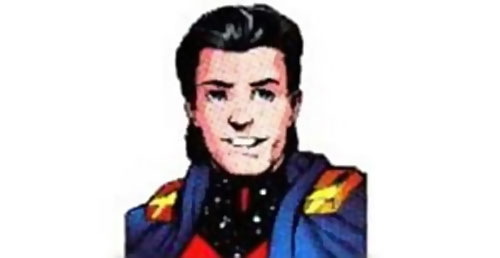