Baranger was trained as a field operative by three different sources :

Her training seems focused on unarmed combat. A black belt in judo was mentioned, but she seemed also proficient with harder techniques such as kicks. Perhaps her qualifications are actually in jujitsu ? In any case, she’s markedly more skilled than even a specially trained but still rank-and-file S.H.I.E.L.D. operative.

Furthermore, she is unusually fit and attractive. Her pain tolerance seems so-so considering her training, though she was better at recovering from pain than at withstanding it.

The black belt with a golden belt

Vamp is equipped with a S.H.I.E.L.D. prototype. The “absorbo-belt” could :

However, this is limited. Only opponents within a short range can “feed” the belt, and its output is limited. For instance Vamp can’t increase her strength to massive superhuman levels (secondary sources  state a “Class 10” cap). And she only seemed able to replicate a portion of Captain America (Steve Rogers)’s speed and skill, as the belt couldn’t endow her with Cap’s experience.

Her durability also doesn’t increase to match her strength. This is a clear concern if she strikes hard surfaces whilst endowed with great brawn.

Curiously, I don’t think that this technology was seen again. Thus, it is possible that Vamp had certain physiological properties that allowed her to use the absorbo-belt.

Only the good die Jung, part 1

Vamp could also turn into a very different form. Called the Animus, it is much larger than Baranger, seems male, and has its own array of powers :

Only the good die Jung, part 2

Like the Vamp form, the Animus form is an adept melee fighter. He’s particularly proficient at batting away projectiles with his club. However, Animus clearly isn’t as supple and mobile as the Vamp. 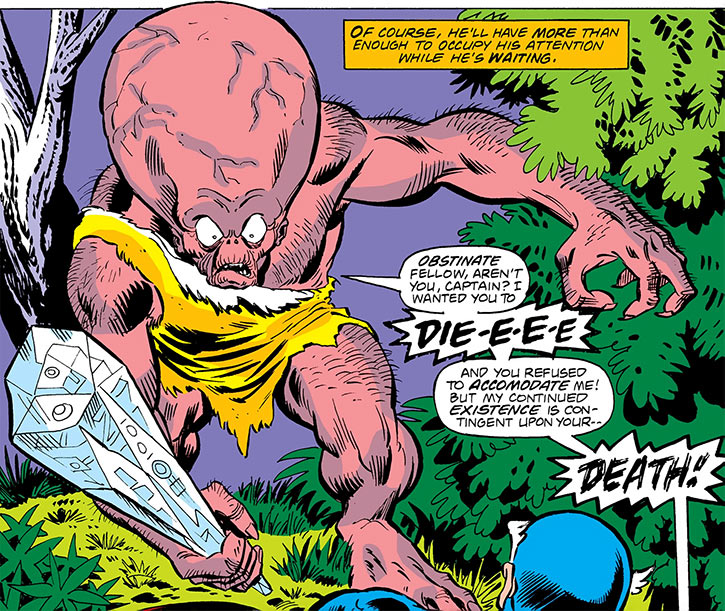 He also has a few notable weaknesses :

Only the good die Jung, part 3

In Marvel handbooks , the Animus is at first estimated to have “Class 100” strength, then later on “Class 25”. That’s quite a difference. But when analysing the fights, “Class 100” seems about right for the Hulk fight, whereas “Class 25” is a possibility for the Captain America fights (but a markedly highballed one).

One notices that the Animus is *much* stronger when fighting the Hulk than when fighting Cap. He’s also far more durable. Cap could reduce the Animus to cringing helplessness with a barrage of punches, yet the Animus remains standing and fighting after the Hulk body-checks him. At that point, the Hulk is about 15,000 times stronger than Cap !

This is a job for… a No-Prize Hypothesis  !

Our game stats assume that the Animus’ club can replicate the strength and durability of his opponents. Essentially, the club is a more powerful version of the absorbo-belt. Albeit a more specialised one, only doing raw brawn.

This cleanly models all his fights, whilst keeping extraneous entities  to a minimum.

Who animates the Animus ? (part 1)

Vamp couldn’t turn into the Animus on her own. The transformation was triggered by a sort of remote control. What this means is unrevealed.

She could be a mutant or mutate needing technological help to assume her superhuman form. That’s the most economical hypothesis, and this ability would resemble that of Manikin (Whitman Knapp) or Evolvo.

Who animates the Animus ? (part 2)

Here’s my personal hypothesis, supported by essentially nothing :

Don’t forget to teep your waiter !

A Corporation agent mentions received telepathic orders “spoken” in a woman’s voice. This likely meant the Vamp – or at least Captain America thought so. The Animus also once telepathically contacted Kligger.

A likely scenario is that the Vamp turns into the Animus to initiate telepathic communication. However this likely requires a strong focus and/or is painful, meaning that the Animus teeps  in Baranger’s voice.

With her outfit, we simply must have one of the greatest vintage disco tunes. We MUST.

During the late 1970s, a wealthy conspiracy called the Corporation became a major player in the underworld. Its secret masters were senior businessmen and politicians, and they seemed particularly interested in superhumans and costumed adventurers. Agents included Moonstone (Karla Sofen), Blue Streak, the Constrictor, Konik, Machinesmith…

They were competent enough to take on S.H.I.E.L.D., which is no mean feat. However, they tended to betray each other and to be too ambitious. Thus, the Corporation was only around for a few years. Decades later there was an attempt at reviving the #brand, but that didn’t take off.

Denise Baranger was closely aligned with one of the big men of the Corporation – Senator Eugene Kligger Stivak. She was his lover, a field-capable Corporation agent, and apparently a major superhuman asset as Animus.

(In Jungian psychology , the animus is a shared, subconscious representation of the idea of a male person. An amalgamation of cultural archetypes about men.)

Super-agents, where are you now ?

Baranger’s big mission was to infiltrate S.H.I.E.L.D.. Back in 1977, this organisation had set up a team of four superhumans as “super-agents”. These were :

*Both* Vamp and the Blue Streak were Corporation plants, gathering inside S.H.I.E.L.D. intelligence. This greatly facilitated Corporation ops against S.H.I.E.L.D.. It even forced S.H.I.E.L.D. to abandon facilities in an effort to determine the source of the leaks.

(It is possible that the Vamp wasn’t originally intended to be a traitor. No less than three different writers handled Captain America during this storyline.)

Nick Fury wanted to code-name her “Femme Force”, after an old experimental unit commanded by Sharon Carter and Valentina Allegra de la Fontaine. But Baranger refused. She had him code-name her “Vamp”, apparently as an homage to the character archetype in old movies.

Nick Fury wanted to recruit Captain America to head this team, but Rogers refused. Instead, it was agreed to have the Falcon (Sam Wilson) start training the team, and perhaps lead them once they would be ready. However, the Falcon soon went missing.

As Animus and supported by other Corporation agents, Baranger made several attempts on Captain America’s life (and liberty, and pursuit of happiness) :

Blue Streak and the Vamp tricked the whole team into attacking, but Cap prevailed. Unnerved, the Blue Streak exposed himself as a traitor and was stopped by Cap. The Vamp pretended to overreact and severely beat the Blue Streak, but Cap prevented her from “accidentally” killing him. Incensed, Texas Twister left S.H.I.E.L.D.. 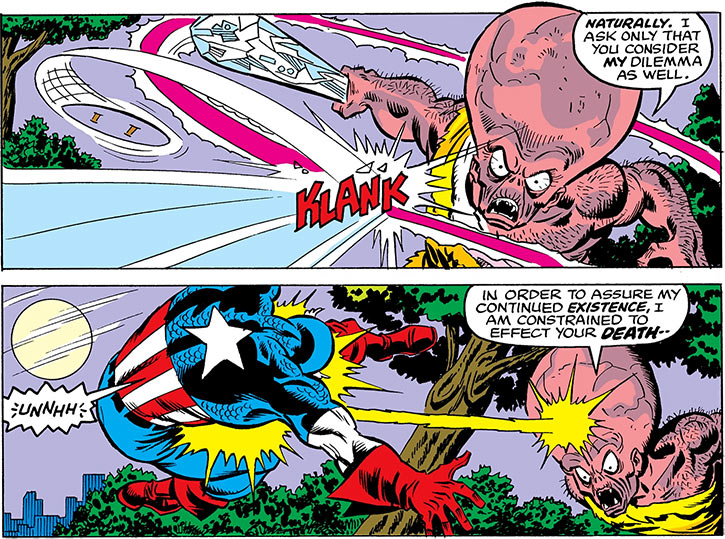 Blue Streak revealed that the Falcon had been kidnapped by the Corporation and was held on Alcatraz Island. Accompanied by the Vamp and Marvel Boy, Captain America invaded the secret Corporation base there. However, they found themselves at the Corporation’s mercy as the Falcon was held hostage. At this point, the Vamp broke her cover and joined Kligger.

Captain America and Marvel Boy nevertheless attempted to fight, and were joined by the incredible Hulk (long story). Vamp beseeched Kligger to activate her Animus metamorphosis before it was too late. She seemed to have a better understanding of what the Hulk could do than her lover did.

… there’s always an excuse for it

It worked. A joint surprise attack by the Animus and Moonstone took down the Hulk for a little while. When the Hulk recovered, Animus encased him in solid matter.

However, the Hulk eventually broke free, and Captain America, the Falcon and Marvel Boy attacked. Moonstone fled, leaving Animus to fight the Hulk. The Hulk destroyed the Animus’ club, which forced the Animus to revert to Vamp form. Baranger was left severely stupefied.

The Vamp was still badly shocked when S.H.I.E.L.D. agents came in to mop up. One thug was about to strike her for being a traitor when Captain America physically intervened. After he forced the agents back, Cap helped Baranger out of her prostration. He then escorted her to a S.H.I.E.L.D. hospital.

The Vamp eventually got free. Perhaps she recovered faster than expected, and escaped. She reputedly then became a minor criminal in the Midwest, far from most super-heroes.

In 1986, she attended a meeting at the Bar With No Name. The Scourge of the Underworld had been murdering minor costumed criminals, and a score of these were organising to strike back for their own safety.

However, a Scourge operative had infiltrated the meeting, and opened fire with a special .50 firearm. The patrons were reaped by the gunfire. When Captain America was taken to the scene by the Water Wizard, the corpse of the Vamp was clearly among the victims.

The Vamp’s costume is archetypal of late 1970s discotheques. Flashy open silk shirt with puffed sleeves, high-waisted disco pants, long hair worn in a high bun but without being drawn tight. She was born to be, she was born to be, aliihiiive !

Baranger seemed to be brash, yet crafty and devious. She also was proud of her martial skills, perhaps to the point of overconfidence. She certainly liked trash-talking her opponents, especially if they seemed to underestimate her.

The Vamp tended to come across as cold, pragmatic and slightly bitter. The main exception was her being sweet toward Kligger. But she seemed to have contempt toward the other Super-Soldiers, clearly thinking that they weren’t as cool as her.

Vamp seemed to crave becoming Animus and to feel the rush of power this form represented.

One remark of hers may imply that she liked old, silent movies. And her fashion choices may mean that she was a disco fan.

The Animus seems to be a completely different person. He speaks in an elaborate, eloquent, polite manner. He appeared embarrassed to kill people, explaining that he considered this terrible but had little choice. He implied that he had to follow the Corporation’s orders or die. 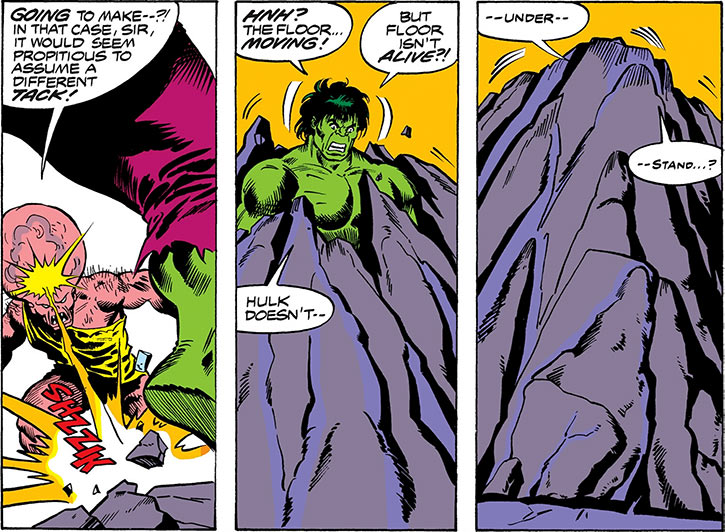 Yet he also was oddly worked up about killing his opponents, growing excited and craving their death. Perhaps the Animus had some sort of bestial killer instinct that was normally kept in check by an advanced, ethical intellect ?

Furthermore, when the Animus was battered his speech patterns, body language, facial expressions and voice reverted to those of Denise Baranger, even though it was still the Animus body.

It is of course possible that the Animus persona is something that the Vamp is role-playing to protect her triple identity. But that seems less likely.

(Jump-kicking Cap in the head) “How do you like it, he-man — getting smacked with your own strength !”

Vamp: “Kligger, he just totalled Captain America. For God’s sake, man — he’ll be on us next ! Please — give me the *power* !”
Kligger: “Very well, my dear — the power is yours !” (hits a button on a Kirbyesque  remote, turning the Vamp into the Animus).

“Obstinate fellow, aren’t you, Captain ? I want you to DIE-E-E-E and you refused to accommodate me ! But my continued existence is contingent upon your death !”

“Bear in mind that I harbour no *personal* hostility toward you. I ask only that you consider my dilemma as well. In order to assure my continued existence, I am constrained to effect your death — despite any of the numerous qualms which might otherwise prohibit my claiming any man’s life. I am not without conscience, sir.”

Lessee, what happened in 1978 at DC… Ah yes, the Implosion . Perhaps Vamp and Animus were notable foes of Firestorm, but were lost in the fray when the book was cancelled ? Like Silver Deer.

The Animus also resembles the Future-Man (bloke wot fought Supergirl). Perhaps he’s an equivalent coming from another Earth, where the Future-Man is the alter-ego of an unpowered Linda Danvers rather than of Barry Metzner.

That’s she’s clad in green and purple also strongly suggests working for the pre-Crisis Lex Luthor. Perhaps her absorbo-belt is far more powerful, but turns her into the Animus if she duplicates too much power from Superman ?

Drawbacks:
Alter-Ego (50 pts – must be authorised by the Corporation), Secret Identity (x2).

Some “general agent training” stats are speculative due to insufficient material.

Equipment:
The club has its own section just below so it’s easier to read. 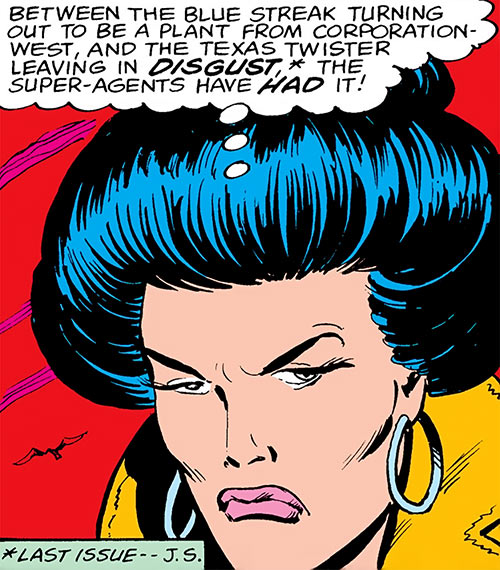 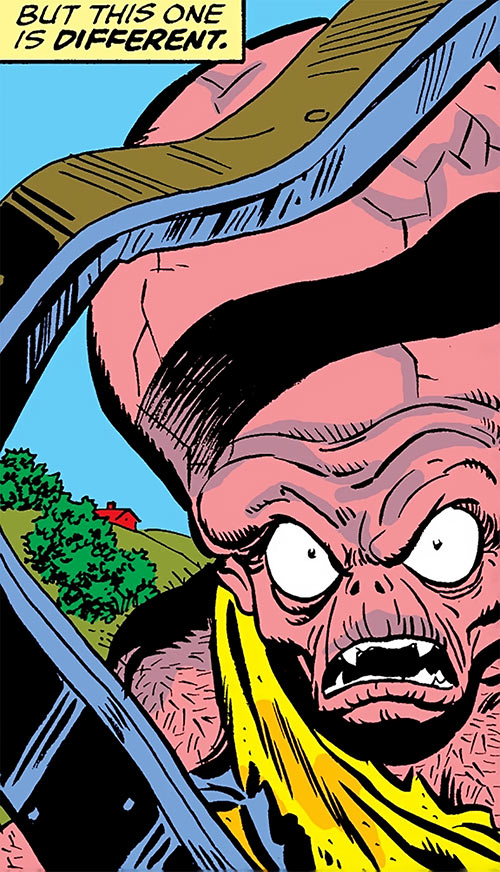